Roger Waters to Robbie Williams: "Your decision to play in Tel Aviv gives succor to Netanyahu and his regime, and endorses their deadly racist policies"

EXCLUSIVE: One UK superstar to another: If you take children and human rights seriously, please don't play Israel 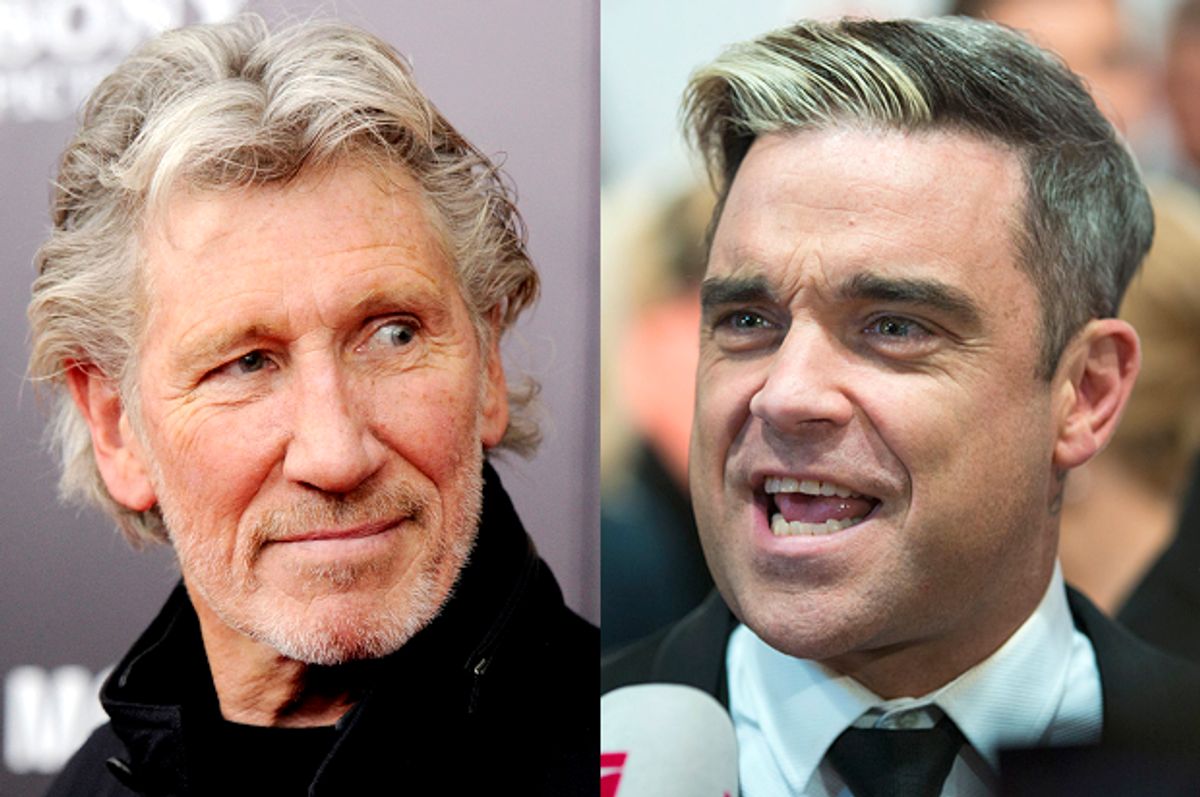 One of the most horrifying incidents during Israel’s massive assault on Gaza last summer was the killing of four Palestinian boys playing soccer on a beach.  This war crime was meticulously documented by human rights organizations and by journalists on the scene at the Al-Deira Hotel. NBC correspondent Ayman Mohyeldin tweeted that just minutes prior he had joined the children in their soccer game.  War-hardened journalists tweeted their eyewitness distress.

I bring up this gruesome scene because popular UK entertainer Robbie Williams, soon to play a May 2 concert in Tel Aviv, is known to be a huge soccer fan.  He is also UNICEF’s UK ambassador and a declared supporter of its Children in Danger campaign. Yet, sadly, when it comes to Palestinian children, like those killed on that beach in Gaza that day, Williams is showing a chilling indifference to their well-being.

London Palestine Action has pointed to his hypocrisy in that he purports to represent UNICEF while preparing to play a gig in Tel Aviv: “We hope UNICEF will remain steadfast in defense of children’s rights, including Palestinian children, and ask Robbie Williams to either cancel his Tel Aviv show or, step down as a UNICEF Goodwill Ambassador…”

UNICEF, as declared in its mission statement, insists that “the survival, protection and development of children are universal development imperatives that are integral to human progress.”

Dear Robbie, playing this concert on May 2 would be giving your tacit support to the deaths of over 500 Palestinian children last summer in Gaza, including the four soccer players on the beach in Gaza, and condoning the arrest and abuse of hundreds of Palestinian children each year living under Israeli occupation, as has been documented by UNICEF itself.

To declare my own history, I confess I myself played a gig in Israel in 2006 before I knew any better. At that time and afterward, moved as I was, I listened to voices from all sides and made it my business to learn as much as I could about the situation in Israel and Palestine. I traveled widely in Israel and the West Bank and now nine years later having done my research, I have come to the conclusion that BDS (Boycott, Divestment, and Sanctions) is the most viable, peaceful way to end the suffering of, and forge a better future for, all the people of the Holy Land. I encourage you, Robbie, and all other artists, not to play in Israel until Israel complies with international law and recognizes the basic human rights of all the people of the region, including the Palestinian people, which, Robbie, includes Palestinian children playing soccer.

Since my 2006 gig, the Boycott, Divestment, and Sanctions movement has emerged as a dynamic force to be reckoned with. Covered heavily in mainstream media around the world, BDS has succeeded in publicizing the Palestinian people’s predicament, their lack of freedom, equality and access to justice.

Now, in 2015, there is really no excuse for musicians agreeing to play in Tel Aviv. The jury of world opinion is in; global civil society supports equal rights for all. We are approaching the same tipping point as when artists lent their support to the anti-apartheid movement in South Africa.

Those innocent soccer-playing children in Gaza were the victims of a violent indiscriminate Israeli attack.

That was more than nine months ago.  Since then, one of those kids, 12-year-old Montasser Abu Bakr, who was playing alongside his brother, and three friends, has attempted suicide and is regularly subject to uncontrollable fits of screaming and sobbing. This is one of the children whose “survival, protection and development” you, Robbie, have promised to uphold. Tragically, it is too late for Montasser’s dead brother and the other three children needlessly slain that day. But, Robbie, you can still stand up and send a powerful message as an individual and as a genuine human rights ambassador, that "business as usual" with Israel is unacceptable until such time as our Palestinian brothers and sisters are afforded equal human rights under international law and their children are not subject to this kind of obscene random slaughter.

As a UNICEF ambassador and a man of humanity and honor, you have, in my opinion, a duty to respect the picket line created by Palestinian civil society and a growing number of engaged musicians, artists and academics around the globe.  Not just Ken Loach and Stephen Hawking and Elvis Costello and Brian Eno and me, but all the other artists, thousands and counting, standing up for the oppressed and the occupied, those subjugated people that Israeli officials describe as needing to be made to “lose weight, but not to starve to death” or, worse, as grass to be mowed.

To be clear, Robbie, whether intended or not, your decision to play in Tel Aviv gives succor to Netanyahu and his regime, and endorses their exceptionalist and deadly racist policies.

So, I say, please, Robbie, look inside yourself and find the soccer fan, the man, the father who can feel another father’s loss.

If you cannot see yourself in the eyes of a Palestinian father, you should do the decent thing and resign from UNICEF, or failing that, UNICEF should let you go.

PS: To all of you reading this who care about children, thank you, we are bound together by the love we have for children, not just Montasser Abu Bakr, his brother and his friends, but the other children in Gaza and the West Bank and Israel and all the other children all over the world who should have the right to live and play in peace and safety. Our love and goodwill extends to each of them equally as we strive to encourage the creation of a Holy Land worthy of that name.