Salman Rushdie digs in on the Charlie Hebdo PEN fight: "Our fellow artists were murdered for their ideas and you won't stand up for them"

The debate spilled over to Facebook, where Francine Prose and Mary Karr took Rushdie to task for his tweets 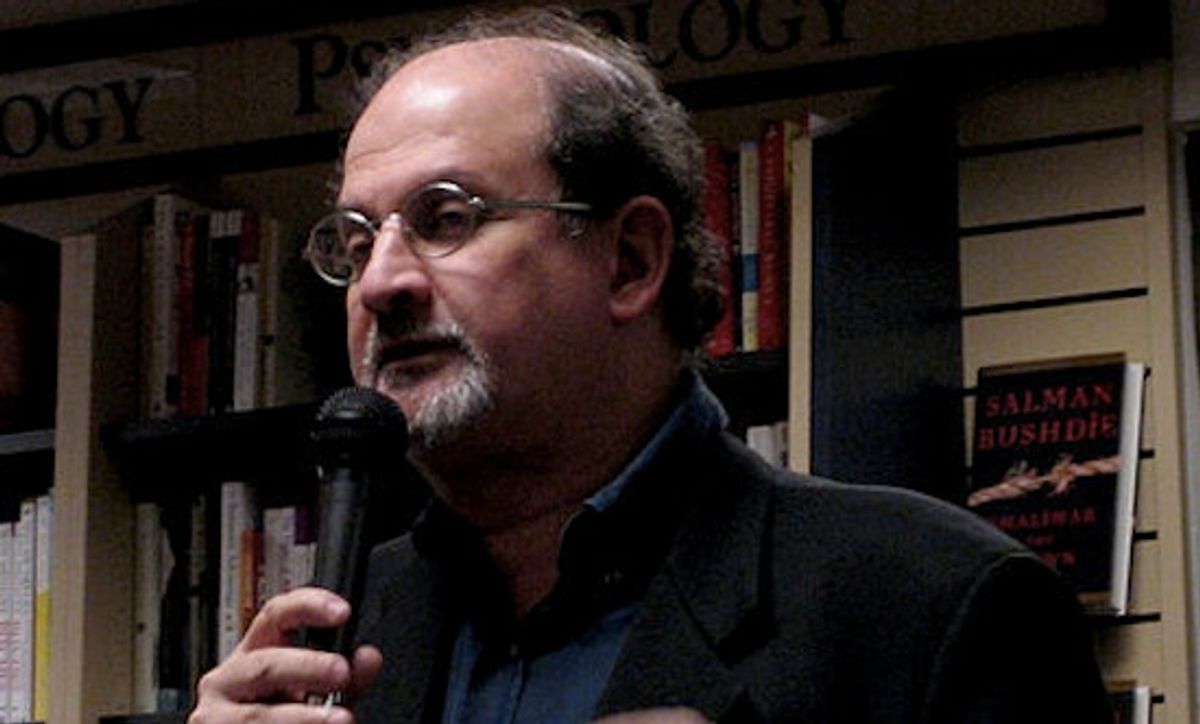 People outside the literary world sometimes caricature it as a dainty, over-polite, aristocratic scene build on deference and gentility; the stereotype may grow from the old schoolyard taunt that reading is for “sissies.” But the guest list for the literary banquet scheduled for next month has suddenly become the site of a debate about terrorism, killing and female genitalia. The issue — the withdrawal of several authors from "table host" duties because of the Freedom of Expression Courage award given by the PEN American Center to the Parisian satire magazine Charlie Hebdo, whose staff was murdered in January — played out a bit differently in the respectable press, on Facebook, and on Twitter.

The New York Times offered its characteristic balanced, sober coverage, quoting novelists Rachel Kushner and Peter Carey, both of who dropped out of the dinner, calling the magazine anti-Muslim or bullying in its secularism, as well as PEN president Andrew Solomon. The author of “Far From the Tree” conceded that, “We all knew this was in some ways a controversial choice,” but said the uproar from the six dissenters took him by surprise. (Besides Carey and Kushner, the other novelists bowing out were Michael Ondaatje, Francine Prose, Teju Cole, and Taiye Selasi.)

Twitter, by contrast, was a real, erm, shitstorm. The spirited defense of the award by Salman Rushdie, who was famously sentenced to death by a Muslim leader, drew both support and denunciation. His much-quoted closing line from the Times story (“What I would say to both Peter and Michael and the others is, I hope nobody ever comes after them.”) did not convince everyone.  “Sometimes I wonder why his words became news,” Tweeter Haider Ali Gillani offered. “He is a shitcunt who claimed himself an illegal child........” (The puckish Rushdie tweeted back: "'Shitcunt' is a first, congratulations. Interested to learn about my illegal child. Boy or girl?”)

Another Twitter user, Loh, tossed out “racist trash Cohen & Rushdie support an anti-Black racist rag.” One out-there tweet threatened, briefly, to reframe the debate: A down-under ranter who goes by the name John Team Australia offered: “Don't know whether to laugh or cry. What a complete and utter disgrace. Shame on the Pen Pussys!” The term — with spelling corrected — took on a life of its own.

When Rushdie used the phrase in a retort — “PEN is holding firm. Just 6 pussies. Six Authors in Search of a bit of Character.” — he inadvertently took this debate about violence and religious tolerance into the equally messy terrain of sexism. “I’m disheartened by the usually sensible intelligent Salman Rushie’s readiness to call us ‘fellow travelers’ who are encouraging Islamist jihadism, and also to label us, on Twitter, as ‘six pussies,’” novelist and critic Francine Prose wrote on her Facebook page. “I can only assume he meant our feline dignity and was not implying that we are behaving like people who have vaginas. It would be sad to think that a writers organization cannot discuss free speech without resorting to political accusations and sexual insult.” Memoirist Mary Karr seconded that notion with, “Resorting to sexist ad hominem attacks makes my blood boil.”

Rushdie explained that he was using someone else’s phrase, and apologized for it. But he kept firing back to Prose’s request that people understand the “fine distinction” of acknowledging the right of Charlie Hebdo to publish without honoring the magazine: He insisted on dissing the dissenting writers as fellow travellers. “As for ‘fine distinctions,’ here's what I see. Our fellow artists were murdered for their ideas and you won't stand up for them. I'm very sorry to see that. I think you'll find the vast majority of the PEN membership will be sorry, too.”

The argument kept raging. Prose pointed out that the term “fellow travelers” was used to scare left-leaning in the Red Scare, making the phrase a bit uncomfortable to deploy on a defense of free speech; Rushdie said to have to fight with old colleagues like Prose and others made him deeply sad and that he feared “some old friendships will break on this wheel.”

Like many of the are-you-with-us-or-against-us debates from any group that depends on solidarity – whether the Bolsheviks, the U.S. labor movement, the Tea Party – this one doesn’t really have an end. The magazine was an equal opportunity offender – its satire was of a sharper and more virulent strain than the U.S. lineage that runs from National Lampoon through David Letterman and Spy magazine through Jon Stewart. The writers, cartoonists and editors didn’t deserve to die. These things we can agree on.

But were they heroic, as the name of the award – Freedom of Expression Courage Award – suggests? Could they be nasty and offensive and less salutary for free expression than, as Prose wrote, “the journalists throughout Latin America and the Middle East risking their lives to tell the truth about the world we live in?” Did the magazine sometimes demonstrate “cultural intolerance” and “kind of forced secular view,” as Kushner told the Times? These are pretty hard calls, and it’s hard to imagine a group as ornery and independent-minded and genuinely diverse as novelists and intellectuals agreeing on all of this. But a group like PEN – and this kind of banquet — is built on agreement, at least temporarily, and on a few important issues like free speech and the physical safety of writers.

“Yes, I would cheer secularism, arrogant or not,” wrote Jane Smiley, who is among the cheeriest and most level-headed writer on the literary circuit, on the Facebook thread. “But I see the logic on both sides, and I think talking about it is better than boycotting.”