The Mayweather-Pacquiao fight: Reports of boxing's death have been greatly exaggerated -- thanks to one man

This week's fight is huge because of Al Haymon, the mogul poised to put boxing back in the forefront of U.S. sports 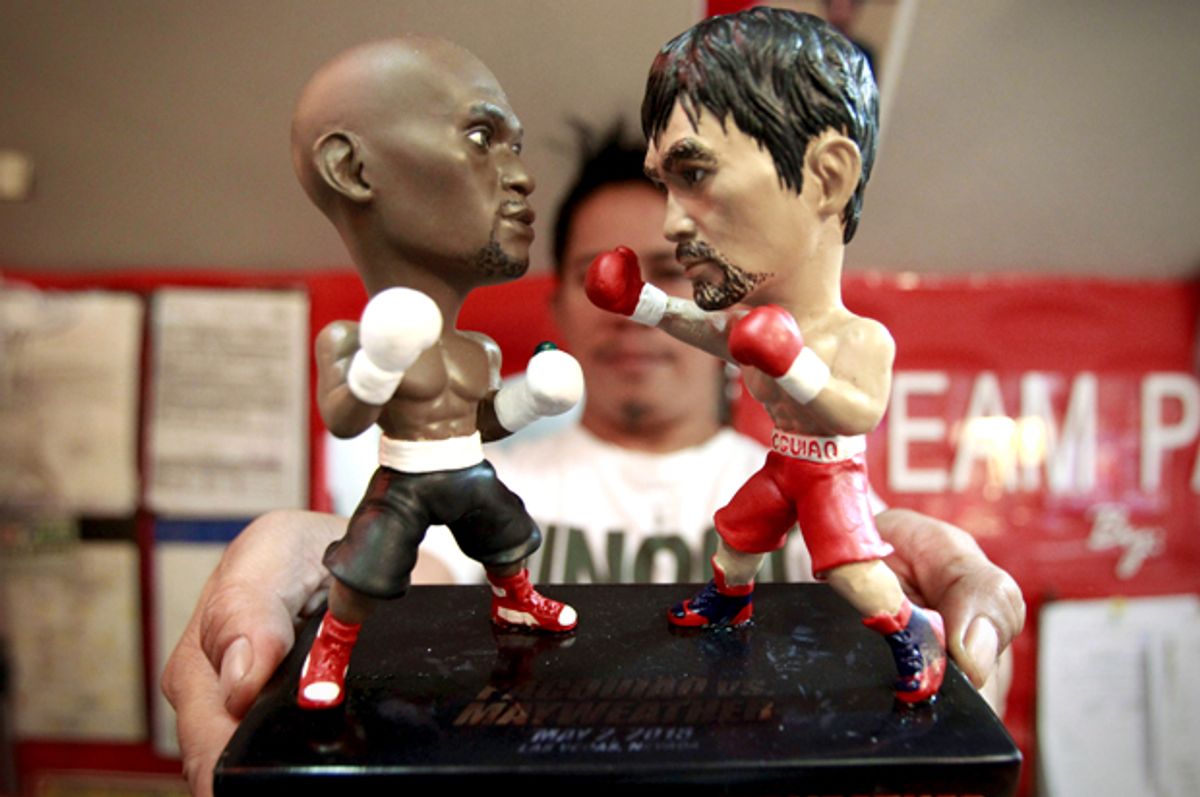 Here are a few head-dizzying numbers to get you started.

The capacity of the MGM Grand Arena in Las Vegas is 16,800 -- a little less when configured for sporting events. This past February a sizable 70,288 rabid New England Patriots and Seattle Seahawks fans packed into the University of Phoenix Stadium to watch Super Bowl XLIX. Yet when boxing royalty Floyd Mayweather and Manny Pacquiao step into the ring on May 2 at the MGM Grand -- in a fight billed as the biggest in yada yada...blah...biggest since....blah blah (you know where I’m going with this), they will make more money at the gate alone than this year’s Super Bowl.

Think about that for a second.

An indoor arena show is on course to rake in close to $72 million -- nearly $10 million more than the Super Bowl -- one of the biggest sporting behemoths on our planet. The largest gate receipt in boxing history up to this point also happened to involve Floyd Mayweather, when he took on Mexican star Saul Alvarez in 2013 at the same venue. How much was that amount? A “paltry” $20 million. As of today if you type a few simple words into Google, you’ll see that there is a ticket available for next week’s bout for a steal -- a mere $147,000. Yep, an ordinary chair, in an ordinary arena, giving you the privilege of sitting in for a few hours of boxing for $147,000.

So think about those numbers for a moment and then consider this: all of it means nothing when it comes to assessing boxing and its future.

A lot of people (i.e., the media, and yours truly, I guess) like to use gigantic events such as May 2 as a test -- a lens through which we can look at the wider sport and decide where precisely it is on the curve of its own fortune. In the case of boxing, it’s been several relentless decades of so-called experts and critics lamenting the supposed death of the sport -- a sport mired with in-fighting between promoters, a plethora of world champions from far too many sanctioning bodies and with ring-side judging that veers wildly from the inept to the downright suspect. That is, of course, until a huge fight comes along, captures the world’s imagination and reignites the same tired old debate.

“Is it dead? Is it back? Why is not like it was in the good old days? Where does this leave the sport?”

Well, here’s the real truth when it comes to boxing and what the Floyd Mayweather/Manny Pacquiao showdown truly means for boxing... it means absolutely nothing at all — at least when it comes to the sport at large. And the reason for this is one man: Al Haymon.

Here’s the crib sheet on Al Haymon: Harvard-educated entertainment and live music mogul who dipped his toes into boxing around two decades ago and is now swimming freestyle in a vast pool of power. Haymon is like Yoda to boxers who sign him up as an adviser, and “the force” is money —a lot of it. Take Floyd Mayweather, for example, the highest-paid athlete on the planet, who happens also to not have a single endorsement deal. He made more than $80 million last year (with no endorsement deal) in 60 minutes’ worth of work over two fights.

Mayweather is not the only one to have reaped the benefits. While he’s an extreme example, not only in his own craft, but in all of sporting history, Haymon, through his contacts in the entertainment industry and his roster of fighters that now totals more than 150, has become notorious for getting his clients the biggest fights, largest purses and not necessarily the toughest opponents. And by collecting so many fighters under his auspices, Haymon, in theory, has more than a mere promotional company -- he has an organization in the same vein as UFC, or even (despite the scripts, spandex and histrionics) WWE.

It’s why 2015 has already been a banner year for the sport, and it’s in large part due to Haymon striking up an outlandish deal with a whole host of networks; CBS, NBC, Spike -- all will show Haymon’s boxing incarnation now known as “Premier Boxing Champions.” Boxing has not been regularly on CBS since the late 1990s and yet Haymon inked a mammoth deal that included eight boxing shows this year alone. That followed a deal that had previously been signed with NBC that would show an eye-watering 73 live boxing events across NBC’s platforms until 2017. Considering that Haymon has a close relationship with CBS-owned Showtime, it means basic cable, premium cable and half of pay-per view are now overseen by the mysterious Svengali.

But will this all work? It’s clearly a gamble, and we’ll only truly see the benefits or pitfalls in a few years when the deal expires. How much of an appetite does the public truly have for boxing? On first glance, there’s not that much outside of the marquee names in the sport. But look back on the growth and success of UFC and the MMA movement and it’s easy to see from where Haymon is borrowing his model. UFC grew quickly by taking the drama of WWE without the “fakery,” raised the stakes for fans and fighters by ensuring only one belt per weight class (unlike in boxing, which has become a Kafka-esque jungle of “champions”) and then gathered so many fighters that fans would truly not even see which stars were missing. And then, what does it matter? His success meant those missing would join soon anyway.

While it might be a bit of a stretch to guess where Haymon’s vision lies, it’s an educated guess based on the bread crumbs he’s left for us to follow his trail. It’s a model that’s worked and generated billions for the UFC and its ever-present face Dana White. And there is no reason why boxing, with the right marketing, emotional stakes and constructed story lines cannot return to its halcyon days, when it shared the same reverence as baseball and horse racing early in the 20th century.

To paraphrase Dana White himself, boxing will always have appeal, that’s just a fact. If you were walking down the street and saw two people on one side hitting a ball or playing basketball, you’d keep walking. If, on the other hand, two people were throwing wild haymakers, you’d stay to watch. Hell, you may even see if there was a bench nearby so you could kick back. Because behind boxing’s sporting finesse, technique and elegance is a deep-rooted gift that keeps on giving -- the ability to feed and satisfy our own fetishized love of violence and dominance in front of our very own eyes.

Al Haymon is our dom, giving us what we want. But Haymon’s present, which for so long was unfathomable for all fight fans, is that we don’t have to pay anymore. We just have to click the remote and switch to basic cable. We have our fix. Whether we lose interest is on us, though -- and in that regard, the future of boxing is still very much in the air.

Igor Guryashkin is a Louisville-based writer whose work has featured for ESPN The Magazine, Sharp For Men and Fox News Latino, covering topics ranging from sports business and technology to boxing. Follow him on Twitter @iguryashkin