Civility in Baltimore?: Are we really surprised when people whose lives are endangered, 24/7, resort to violence to be heard? 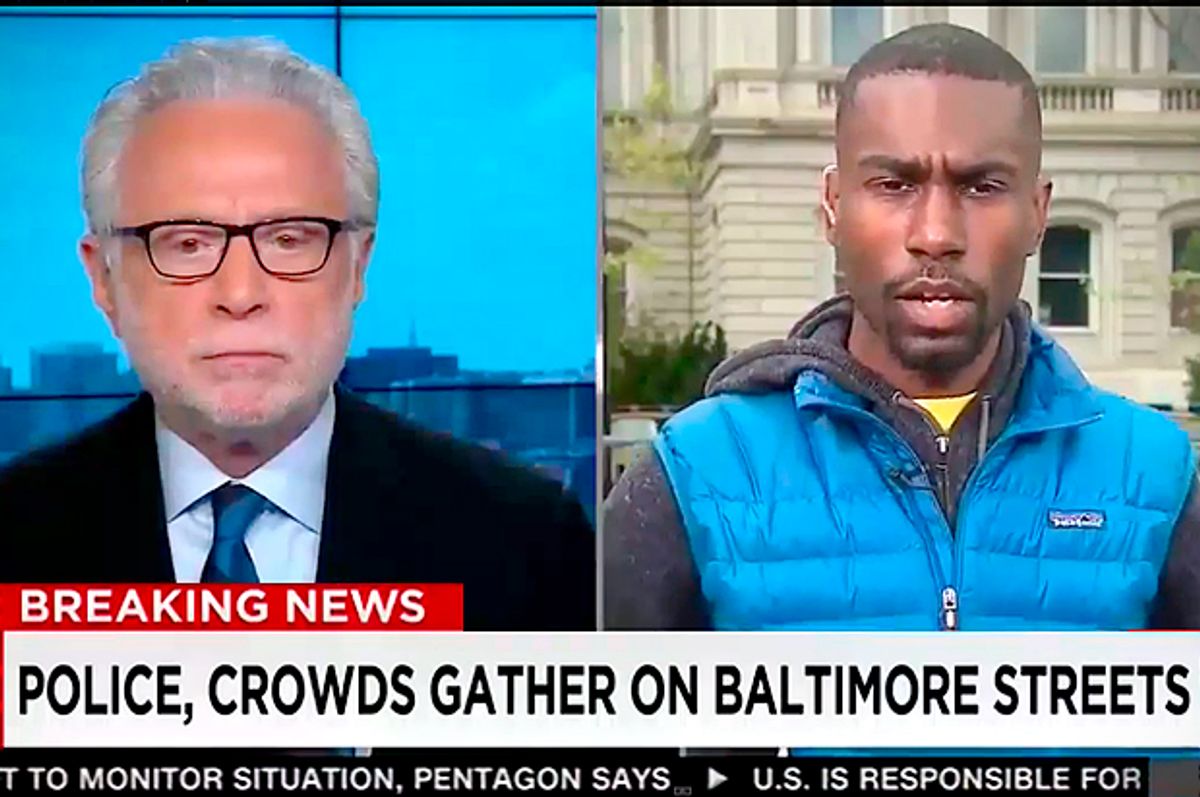 One of the things most remarked upon in the wake of the uprising in Baltimore has been the fact that, far from being an isolated incident, the killing by police of black men -- in this case, Freddie Gray, handcuffed and helpless -- is all too common.  Too common as well are the liberal narratives that on the one hand deplore the killings and yet firmly and sanctimoniously insist that violence is never justified.  The condemnation of the violence came from the mouth of Mayor Stephanie Rawlings-Blake and was quickly picked up by the president, who echoed the language used and the judgment proffered.  The fact that Obama condemned the violence is no surprise — he merely echoed the sentiments he expressed during the unrest in Ferguson, Missouri, after the killing of Michael Brown. But he has moved a great distance from his empathetic identification with the Trayvon Martin case (recall Obama said that if he had had a son, that son could have been Trayvon Martin), to, like the mayor, condemning the rioters as uncivil “thugs.” What allows the president to make such different statements is his focusing solely on the acts of violence and not what caused them in the first place.  And by homing in on deploring violence in and of itself, one can easily dismiss the problem once the violence has ended — one has assigned blame and achieved closure. That is, until it happens again.

Wolf Blitzer, interviewing community organizer DeRay McKesson on CNN, picked up this liberal manner of litigating the case, pressing McKesson to openly condemn the violence. When several attempts failed to yield the intended result, Blitzer finally evoked the president’s words and asked McKesson to agree with Obama. To his credit, McKesson did not back down.

Consider these exchanges:  Blitzer, “You want peaceful protests, right?” To which McKesson replies, “Yeah, for sure. And remember, the people who have been violent are the police.”  Blitzer then rattles off the statistics, not of black people killed, but of police injured, property damage and numbers of arrests.  He then says, “There’s no excuse for that kind of violence, right?”  To which McKesson replies, “There’s no excuse for the seven people the Baltimore police killed in the past year, right?” Finally, exasperated by McKesson’s tenacity, Blitzer pleads, “I just want to hear you say there should be peaceful protests.”   McKesson then says, “There should be peaceful protests.  But I don’t need to condone it [the violence] to understand it.” This is precisely the heart of the matter — the utter unwillingness of Blitzer to step out of his punditry to actually see what is going on, and has been going on for decades.  Without that understanding, his attempts to ascertain the relative violence against and by police are futile, for he has given up anything resembling journalistic objectivity.

In his own takedown of Blitzer, Jon Stewart pointed out Blitzer’s obliviousness to even his own statements.  Stewart first noted Blitzer’s remarks, “Hard to believe this is going on in a major American city. This is a scene that a lot of us never anticipated seeing … I don’t remember seeing anything like this in the United States of America for a long time.” And then showed footage of him saying exactly the same thing months ago at Ferguson.  It was not only Blitzer’s vacuous and repetitious script and his ethical and moral bankruptcy that is remarkable, it is, moreover, his sheer intellectual laziness and arrogance.

Stewart pointed out that one should not be surprised at the repetition of such uprisings, given the repeated -- or I would say, constant, consistent and intractable — instances of structural racism that we find in the United States, even in this “post-racial” age, with Obama in the White House.

The demand coming from people like Blitzer, Mayor Rawlings-Blake and President Obama in the face of all this is not to actually address the roots of the problems (and the instruments and effects of structural racism reach into schools, courts, hospitals, prisons, workplaces and, of course, the streets), but to tidy up and manage the expressions of frustration, anger and fear coming from those whose lives are shaped, distorted and damaged by America’s legacy of racist violence; that is, to contain these expressions within the parameters of legally permissible expression, behavior and civility. The problem is, of course, that it is precisely the legal system that should be indicted here for its utter corruption and self-immunization when it comes to its treatment of blacks and browns and other subaltern populations.

And what about civility?  Here we find the same people who assumedly have no problem uttering the most offensive obscenities toward and wishing the most violent deaths upon those who might cut them off in traffic, shaking their heads in astonishment that some people -- whose lives are endangered systematically, 24/7, and whose rights for redress are constantly denied -- might destroy even their own neighborhoods out of a sense of desperation, grief, anger and futility.

In her 1980 essay “Civil Wars,” June Jordan had this to say about the demand that she be “civil” in the face of historic racism:

Most often, the people who can least afford to further efface and deny the truth of what they experience, the people whose very existence is most endangered and, therefore, most in need of vigilantly truthful affirmation, these are the people — the poor and the children — who are punished the most severely for departures from the civilities that grease oppression.

If you make and keep my life horrible then, when I can tell the truth, it will be a horrible truth; it will not sound good or look good or, God willing, feel good for you, either. There is nothing good about the evils of a life forced into useless and impotent drift and privation.

Jordan is writing in the aftermath of the 1980 Miami riots that took place in May following the acquittal of four Miami-Dade police officers in the death of Arthur McDuffie.  McDuffie, an African-American, died from injuries sustained at the hands of four white officers trying to arrest him after a high-speed chase. The officers were tried and acquitted for manslaughter and evidence tampering, among other charges. Subsequently, a riot broke out in Miami.  In 1981 Dade County paid McDuffie's family a settlement of $1.1 million after they filed a civil lawsuit against the officials.

Jordan is reacting to the voices that, like Blitzer and Rawlings-Blake, and Obama, urge calm and peace, and condemn violence as not only criminal, but also inexplicable and irrational — beyond the sphere of “civilized” behavior.  But they just don’t understand a world in which simple existence is hard enough, even without the state consistently enacting its own brand of violence.  Over and over again. As we saw again in Miami nine years later, in 1989, when “the Colombian-born officer, William Lozano, face[d] two counts of manslaughter in the shooting of the 23-year-old motorcyclist, Clement Lloyd, as he was being chased by the police last Jan. 16, and the death of his passenger, Allan Blanchard, 24, who was fatally injured when the motorcycle crashed." As the New York Times noted in its reportage of that riot, “Four times in the 1980's the slaying of blacks by police officers or subsequent verdicts of not guilty in the officers' trials have touched off racial violence in Miami.”

One can easily trace the historical record further back to see the persistence of this pattern of state violence, and then take the narrative forward in time, into the police wagon where Freddie Gray was given a “nickel ride” that likely killed him. The arrogance and ignorance of those who wag their fingers at rioters who react with rage and anger, and direct their expressions of grief outwardly after seeing this history manifesting its evil upon their fathers, uncles, brothers, mothers, sisters, aunts and cousins, their neighbors and friends, over and over again, is appalling.  To borrow from DeRay McKesson, I say this not to condone violence, but to try to understand it, and we need to understand it if we are going to address its causes.  Until we do, how in the world can we expect this not to happen over and over again?

ADDENDUM: Finally, in the course of the riots in Ferguson and now Baltimore, liberals and others have insisted on evoking Martin Luther King Jr. and his advocacy of nonviolent protest, as the proper alternative.  They use King as a way to invalidate any attempt to understand the issues that drive people to act violently.  These critics would do well to consider King’s own statements with regard to riots, in his speech “The Other America”:

But it is not enough for me to stand before you tonight and condemn riots.  It would be morally irresponsible for me to do that without, at the same time, condemning the contingent, intolerable conditions that exist in our society.  These conditions are the things that cause individuals to feel that they have no other alternative than to engage in violent rebellions to get attention.  And I must say tonight that a riot is the language of the unheard.