Carey Mulligan is magnificent as the courageous, uncertain heroine in a ravishing new adaptation of Hardy's novel 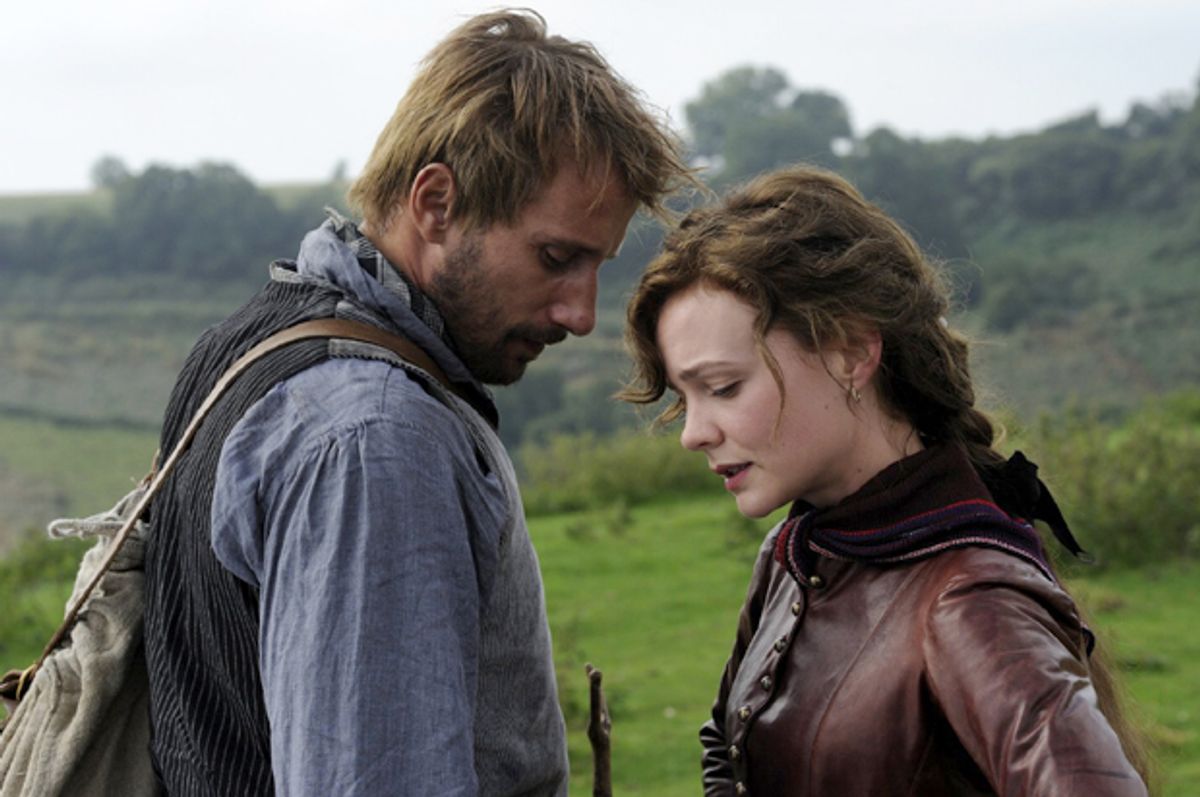 If the great English novels of Dickens and Jane Austen and George Eliot are often satirical in tone, and devoted to capturing or indicting the social hypocrisy of their time, Thomas Hardy’s books belong to another order entirely. Of course the stifling force of bourgeois morality plays an important role in Hardy, especially when it comes to his depictions of independent-minded women like Bathsheba Everdene, the heroine of “Far From the Madding Crowd,” who is played by Carey Mulligan in Thomas Vinterberg’s ravishing new film adaptation. But Hardy is hardly ever satirical -- and indeed almost never funny, except in a mode of clumsy rural good cheer. He perceives society as an unstable veneer pasted atop the power of nature and land and weather, not to mention humanity’s fundamental kinship with those things, which has been altered but not quite erased by the forces of industry and modernity.

Vinterberg and his collaborators – let’s mention screenwriter David Nicholls and cinematographer Charlotte Bruus Christensen, for starters – do not try to extricate Bathsheba from the specific contradictions of her surroundings in 19th-century rural England, or to make her seem “contemporary.” She doesn’t require it. Even amid a plot that outdoes Dickens in its implausible twists and sudden reversals of fortune, and a social world that views her as a dangerous rebel simply for being an unmarried woman who runs a farm, Bathsheba is an entirely modern female archetype, perhaps the ultimate “smart woman, foolish choices” figure in literary history. She wants to be wanted, for herself rather than for what she owns or what she represents, which is what we all want, at least since the invention of the ambiguous institution known as romantic love. She wants a man who measures up to her in force of personality, in independent thinking and, not far below the surface, in erotic possibility. Her problem is that hardly any men do.

From our oh-so-enlightened perspective, the social barriers that keep Bathsheba apart from Gabriel Oak (played with brooding, sleepy-eyed intensity by Belgian actor Matthias Schoenaerts), the neighboring farmer who proposes to her and then is financially ruined by a memorable midnight sheep-apocalypse, may appear antiquated and artificial. But both Hardy’s novel and Vinterberg’s film make clear that from Bathsheba’s perspective those issues of class and property and propriety have no moral importance. She uses them as crutches at times, but only out of weakness or exhaustion, when she grows tired of the constant struggle for self-definition. Anyone who discusses Bathsheba’s story by invoking the contemporary currency of “privilege” – after Gabriel is impoverished, she unexpectedly inherits her uncle’s farm and becomes rich – has retreated into intellectual laziness. Hardy’s point is precisely that Bathsheba has been granted the freedom to begin to think for herself, and to pursue her own desires, in a time and place where such things are almost impossible.

“Far From the Madding Crowd” is the first mainstream English-language film from Vinterberg, a Danish director and charter member of Lars von Trier’s Dogme movement who is best known for “The Celebration” in 1998 and “The Hunt” in 2012. He has accomplished something that is both extremely simple and extremely difficult: This is a gorgeous literary adaptation true to its period and its source material in almost every respect, largely shot in the “Hardy country” along the south coast of England. It’s also a film that feels charged with life and hunger and romantic-erotic energy, with the ever-present danger of fire and storm and financial catastrophe that connected life in 19th-century rural England to the Middle Ages, and to mythology. (Hardy is arguably closer to Chaucer in one direction, and J.R.R. Tolkien in the other, than he is to Dickens or Austen.)

As Mulligan plays her, Bathsheba is a young woman who is constantly questioning herself, constantly uncertain, constantly daring herself to be better and braver than she is. (Is it coincidence that her last name is virtually the same as the androgynous rebel heroine of “The Hunger Games”? I don’t think so.) She’s also a young woman who grows tired of being viewed as impregnable and untouchable, of bewildering or intimidating the men around her. While Gabriel, who now works for her as a shepherd, stands aloof out of pride and shame and class anxiety, her tormented neighbor Boldwood (marvelously played by Michael Sheen) offers her the life of wealth and luxury and wifely inactivity that’s precisely what she dreads. When the roguish, aristocratic soldier Frank Roy (Tom Sturridge) arrives on the scene – a veteran of many more difficult conquests, we imagine – Bathsheba is easy prey.

Sturridge’s plummy portrayal of Frank may verge on dandyish stereotype, but he finds some more complicated coloration as the story progresses, and his Redcoat sergeant is unquestionably handsome enough to charm the knickers off heiresses and maids alike. Frank’s overt sexuality, externalized in his swordplay and his scarlet jacket, is a destabilizing force in this ordered universe, rather like the fruit of knowledge in the Garden of Eden. It nearly destroys Bathsheba, and permanently disrupts the uneasy equilibrium of her romantic triangle with Boldwood and Gabriel. But Frank is like Satan in other ways, too – he is vain and proud and feels wounded by God and disillusioned in love. He behaves despicably and is punished for it, but what he brings with him – at least, in the projected or potential future of this story -- can put men and women on an equal footing, and set them free.