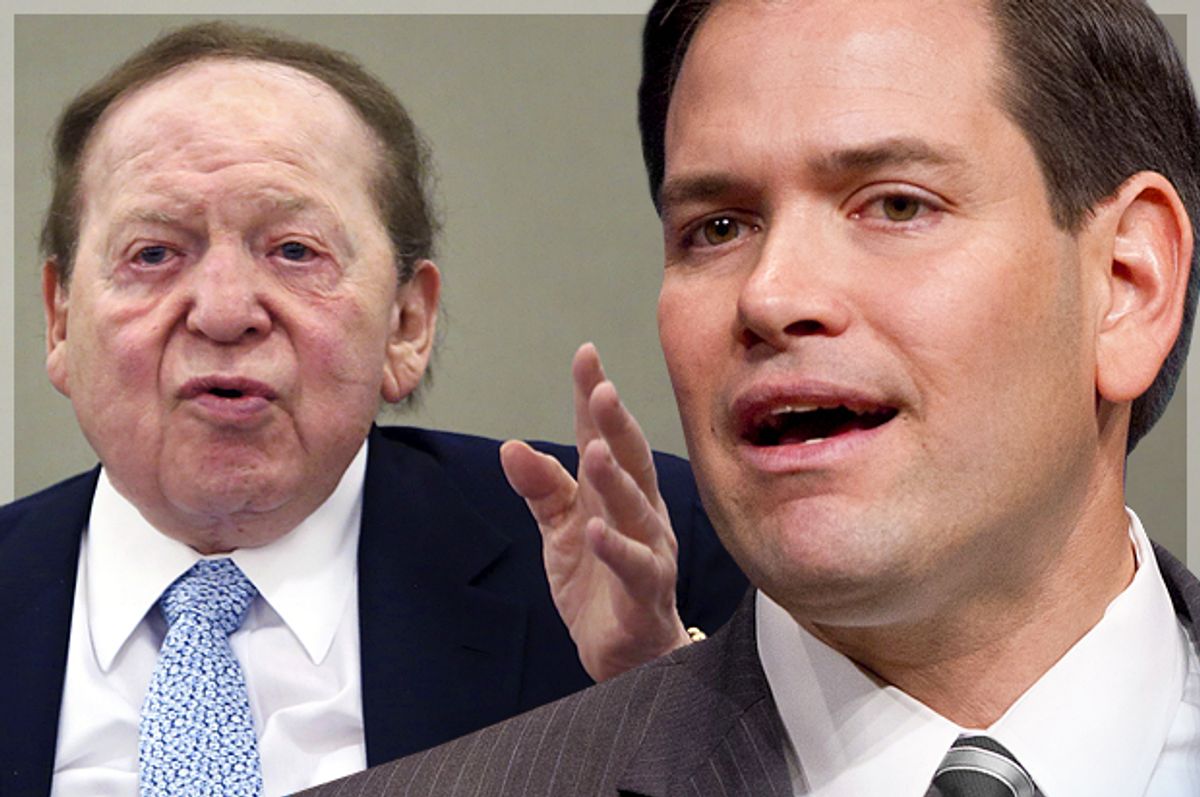 Marco Rubio loves Israel, and he hates Iran. Did you know this? Well, just in case you didn't: he does.

Rubio has been going out of his way recently to suggest that, if president, he'll blow up whatever relationships the United States has with the great world powers in order to serve the right-wing Israeli government. For starters, Rubio has pledged to scrap any deal with Iran as soon as he enters office. At first, he suggested that the United States could then easily nudge Western Europe, Russia and China back into reimposing sanctions on Iran by appealing to "the standing of the United States on the global stage." He has since recognized that the United States will no longer have any standing on the global stage after scrapping a delicately negotiated deal over Iran's nuclear program. He understands that sanctions imposed by the United States would be "more effective" if coordinated with other countries -- such as the ones that actually do business with Iran -- but he'd impose them anyway, and Iran would somehow care. Because Marco Rubio would look tough!

"And in my mind," Rubio told NPR earlier this month, "if the president wanted this to be a permanent deal that survived his presidency, he would have brought it to Congress." Thanks to the work of Rubio's more talented colleague in the Senate, Bob Corker, Obama has since relented and agreed to sign a bill that would bring the deal before Congress. The Corker-Cardin bill, currently undergoing a glacial amendment process in the Senate, would give Congress a shot at killing an Iran deal -- though Congress would have to muster a veto-proof majority on a resolution of disapproval, and that's unlikely. But a small shot is still a shot. And now, Rubio may ruin even that tiny shot, in order to improve his positioning within the Republican presidential primary field.

Rubio has introduced an amendment to Corker-Cardin that would require, as part of any deal, Iran to recognize Israel's right to exist as a Jewish state. This makes Bob Corker a very angry man, since the amendment is a poison pill that would likely bring back the president's veto threat. Corker has thus far been able to keep together a coalition of Democrats and Republicans willing to swat down amendments to the deal struck in committee -- the one President Obama has said he would sign -- but no senators are looking forward to voting against this amendment due to the politics of VOTING AGAINST ISRAEL.

Why should Marco Rubio care that he's irritated all of his colleagues with this stunt, though? It's paying off quite well for him. Last week, Politico reported that Rubio has taken pole position in the "Sheldon Adelson primary." This is the new, post-Citizens United presidential tradition in which Republican candidates leap over themselves in pandering to Israeli right wing politics in order to secure the financial backing of casino billionaire Sheldon Adelson. Adelson has been very impressed with this young padawan from Florida's ability to say whatever he wants to hear at all times. So impressed that he might just throw him tens or hundreds of millions of dollars that he finds under the couch cushion.

Before Iowa and New Hampshire, GOP candidates are competing in the Sheldon Adelson primary, and some will travel to his posh Venetian hotel in Las Vegas this weekend in hopes of winning it. But one candidate — Marco Rubio — has emerged as the clear front-runner, according to nearly a half-dozen sources close to the multibillionaire casino mogul.

In recent weeks, Adelson, who spent $100 million on the 2012 campaign and could easily match that figure in 2016, has told friends that he views the Florida senator, whose hawkish defense views and unwavering support for Israel align with his own, as a fresh face who is “the future of the Republican Party.” He has also said that Rubio’s Cuban heritage and youth would give the party a strong opportunity to expand its brand and win the White House.

Adelson also hasn't given up entirely on Scott Walker, because they share a common interest in crushing labor unions. One candidate that Adelson may have abandoned, though, is Jeb Bush. National Review reports that Jeb Bush has already "lost the Sheldon Adelson primary" because his record of pandering to the billionaire's every whim comes in slightly below 100 percent. Though even that overstates Bush's offense: it's more that Bush's record of stopping everyone he knows from pandering to the billionaire's every whim is slightly below 100 percent. We were half-joking when we wrote about how Bush was dead to Israel hawks when word got out that he speaks to former Secretary of State James Baker from time to time. But when it comes to Adelson, the most important Israel hawk of them all, that's pretty much exactly what happened. From National Review:

The bad blood between Bush and Adelson is relatively recent, and it deepened with the news that former secretary of state James Baker, a member of Bush’s foreign-policy advisory team, was set to address J Street, a left-wing pro-Israel organization founded to serve as the antithesis to the hawkish American Israel Public Affairs Committee (AIPAC).

J Street has routinely staked out liberal views anathema to those held by Adelson and his allies. Adelson sent word to Bush’s camp in Miami: Bush, he said, should tell Baker to cancel the speech. When Bush refused, a source describes Adelson as “rips***”; another says Adelson sent word that the move cost the Florida governor “a lot of money.”

The worst part about "losing the Sheldon Adelson primary" is that you still can't say whatever you want once you've been eliminated. You still have to maintain fealty to Adelson to ensure that he will at least ignore you, rather than spend tons of money going directly after you. Take Sen. Rand Paul, the supposed "isolationist" who recently learned to love the drone war and wanted to increase military spending by hundreds of billions of dollars. He's taking dinners with Adelson just to beg them not to wage an all-out assault on him.

For another 2016 hopeful, Kentucky Sen. Rand Paul, it’s not about winning Adelson’s endorsement — it’s about making sure he doesn’t come after him.

During an appearance on a Jewish-themed radio program last month, Paul, who’s come under fire from the neoconservative wing of his party for his more isolationist foreign policy views, said he’d recently had a private meeting with Adelson and his wife, Miriam, and asked him about a report that he was considering funding a campaign against him.

“They assured me there was no truth to that,” Paul said.

There may be no truth to it now, as long as Paul continues to humiliate himself in pandering to hawks on foreign policy. The minute that rightward momentum peters out, Adelson and his lovely wife will be sure to drop buckets of cash on his head.

But, again, the ability for billionaires spend unlimited sums of money for and against presidential candidates is just a glorious exercise of free speech rights that in no way has a corrupting effect on our politics.