"The law is the enemy": What RFK can remind America about police brutality

Amid all the hand-wringing about riots in Baltimore, we lose sight of the horrendous treatment that caused them 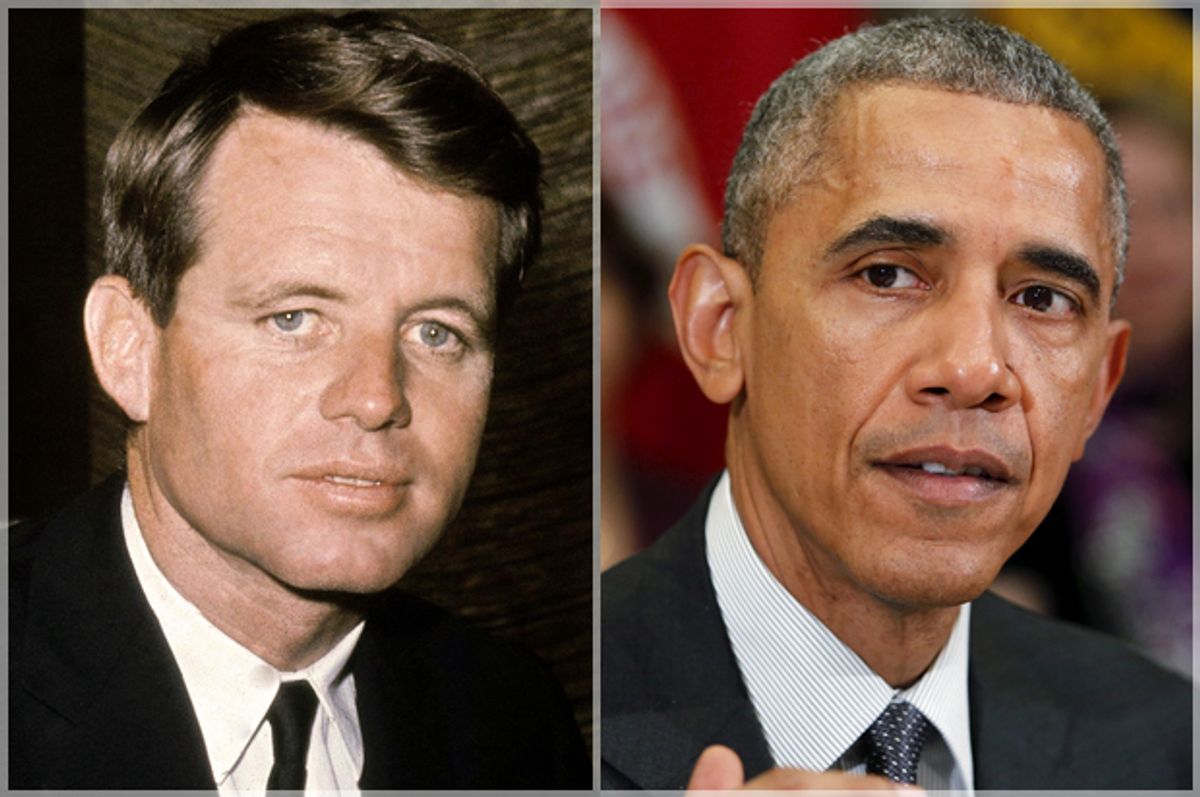 President Obama offered some notable thoughts on the events in Baltimore yesterday. After issuing the standard disclaimers about criminals being held accountable, and the need to respect the police, he concluded with the following:

"If we are serious about solving this problem, then we are going to not only have to help the police, we are going to have to think about what can we do, the rest of us, to make sure that we are providing early education to these kids. To make sure that we are reforming our criminal justice system so it’s not just a pipeline from schools to prisons. So that we are not rendering men in these communities unemployable because of a felony record for a nonviolent drug offense. We are making investments so they can get the training they need to find jobs. That’s hard. That requires more than just the occasional news report or task force.

"If our society really wanted to solve the problem, we could. It’s just it would require everybody saying this is important. This is significant and that we don’t just pay attention to these communities when a CVS burns. We don’t just pay attention when a young man gets shot or has his spine snapped. We are paying attention all the time because we consider those kids, our kids, and we think they are important and they shouldn’t be living in poverty and violence. That’s how I feel.”

That's actually a bit of a dodge. Yes, it's important to deal with poverty and lack of education and opportunity. But this is an issue that relates to a very specific problem: police brutality. It's not a matter of building better streets and schools. Those things are important, of course. And they contribute to the atmosphere of crime and violence that characterizes many urban neighborhoods. But there is no excuse for authorities to brutalize and kill suspects in their custody. Such outrageous conduct under color of law is a matter first and foremost of official racism and personal sadism. Fixing poverty will not alone fix this problem.

For a historical contrast, look to Arthur M. Schlesinger Jr.'s 1978 biography of Robert F. Kennedy, in which Schlesinger recalls a dispute between Kennedy and Dwight D. Eisenhower, first reported in the New York Post in 1965, over riots that had broken out in Los Angeles.

In August 1965 violence broke out in Watts, the black ghetto in Los Angeles. Beating, looting, burning, sniping, bombing, went on for six days, leaving 34 people dead, more than 1,000 injured. The Watts riot, said Dwight D. Eisenhower sternly, “did not occur in a vacuum. I believe the U.S. as a whole has been becoming atmosphered, you might say, in a policy of lawlessness.” The former President’s solution was “greater respect for the law.” Kennedy lashed back. “There is no point in telling Negroes to obey the law,” he said. “To many Negroes the law is the enemy. In Harlem, In Bedford-Stuyvesant it has almost always been used against them.”

Rick Perlstein mentioned that RFK quote in this fine piece in In These Times last September, in which he did a historical survey of the urban upheaval "from Watts to Ferguson." Leaving aside for a moment the antiquated and cringeworthy language, it's nonetheless hard to imagine a Democratic leader, much less a senator and former attorney general, making such a pointed statement about injustice to black Americans today. Such clear observations are left for writers like Ta-Nehisi Coates, while liberal politicians twist themselves into pretzels trying to be supportive of police while still finding a way to explain such eruptions of anger from African-Americans.

Lest anyone think that such comments by RFK 50 years ago were the commonly held views of the liberal mainstream, note this editorial about the Watts riots from Life magazine, which could sadly almost pass for something written yesterday:

To many, the Los Angeles violence seems strangely timed, so soon after the great Negro achievement of the voting bill. But it is the nature of revolutions (and Negro equality is a revolution) to discover new demands after the the first ones are achieved. The remaining grievances of the Negro are social and personal and will be satisfied only by personal conquest, in black and white individuals and neighborhoods, of suspicion, fear and hate. White people do not bridge this gap by treating Negroes as an undifferentiated and underprivileged mass, nor yet by indulging them like children out of a misplaced sense of inherited guilt.

It was an irresponsible Negro who said to a rally that led to 22 arrests in Hartford last week, "Every cop is your enemy whether he's black or white." But it is a former US Attorney General who allowed his sympathy with slum-dwellers problems to lead him to say something almost as mischievous."There is no point in telling Negroes to obey the law. To many Negroes, the law is the enemy," said Senator Robert F. Kennedy...

Then, as now, everyone seemed to miss the point RFK was making. Of course poverty and alienation and all the rest are problems that must be addressed. But the Watts riots started with an altercation at a traffic stop in a community that had been brutalized for decades by the police. As Perlstein pointed out in his In These Times piece:

Los Angeles cops were led by William H. Parker, who coined the phrase “thin blue line”—as in, the cops were a thin blue line between chaos and civilization. Parker liked to recruit white officers from the Mississippi Delta. Parker explained the origin of the Watts riots to an investigating commission: “One person threw a rock and then, like monkeys in a zoo, others started throwing rocks.” His patrolmen, meanwhile, would begin tours of the ghetto with a ritual cry taken from a cigarette commercial, “LSMFT”—“Lucky Strike Means Fine Tobacco.” Only, for them, the letters stood for “Let’s Shoot a Motherfucker Tonight.”

Perlstein points out that this blatant racist violence was characteristic of many big-city police departments across the nation. This was not about African-American poverty or lack of education. It was about the police.

You'll no doubt recall that the Rodney King riots 25 years later were also in reaction to a not-guilty verdict in favor of police, despite civilian videotape telling the tale of violent misconduct by the side of the road. (Sound familiar?) That video was shocking at the time, and many Americans undoubtedly assumed it was an anomaly. But the black community knew it wasn't. And now that we've seen cellphone video after cellphone video of police violence against African-Americans, it's impossible to deny what the community was saying then and what they're still saying now.

We don't know what police were saying or doing to Freddie Gray in that police van. But we do know that he emerged from it with a severed spine. Calling this a problem of poverty is a non sequitur. Kennedy had it right 50 years ago and we still haven't grappled effectively with this problem

The question is whether we'll move forward this time in a more positive way than we have in the past. Unfortunately, our current political moment is not a favorable one. Liberals are offering the usual bromides about opportunity and education, while the right is issuing hysterical terror warnings about every corner of the globe. From our Southern border to the Middle East to our inner cities to our Christian bakeries in Indiana, the right is telling paranoid Americans that the "other" is working to destroy our way of life.

Hawkish positions on national security are always a big winner, but let's not forget that it has traditionally gone hand in hand with the domestic version: law and order. As crime rates fell over the past couple of decades, conservatives were unable to keep up the illusion of urban anarchy. But from the sound of the right-wing howling about Ferguson and Baltimore, it's making a comeback. In an email newsletter, the National Review approvingly quoted Stephen Crowder, channeling the right-wing id with this comment:

You are animals. If you are able to destroy the home or business of your neighbor, you’ve lost your humanity. If you are able to harm your fellow man, to scare their children, to do so with a clean conscience, merely because of something that some cop may or may not have done, which has nothing to do with you . . . you are a horrible human being. You disgust me, as you should anyone who wishes to be a part of civilized society.

That is perhaps a bit cruder than what we heard from the National Review of 50 years ago, but the sentiment remains the same, although they took the gratuitous step of blaming civil rights leaders for the unrest:

For years now, the Rev. Dr. Martin Luther King and his associates have been deliberately undermining the foundations of internal order in this country. With their rabble-rousing demagoguery, they have been cracking the "cake of custom" that holds us together. With their doctrine of "civil disobedience," they have been teaching hundreds of thousands of Negroes - particularly the adolescents and the children - that it is perfectly all right to break the law and defy constituted authority if you are a Negro-with-a-grievance; in protest against injustice. And they have done more than talk. They have on occasion after occasion, in almost every part of the country, called out their mobs on the streets, promoted "school strikes," sit-ins, lie-ins, in explicit violation of the law and in explicit defiance of the public authority. They have taught anarchy and chaos by word and deed - and, no doubt, with the best intentions - and they have found apt pupils everywhere, with intentions not of the best. Sow the wind, and reap the whirlwind. But it is not they alone who reap it, but we as well; the entire nation. [National Review via The American Spirit: U.S. History as Seen by Contemporaries, Volume II, p. 523]

Republican presidential candidates are still formulating their responses to the events in Baltimore. Jeb Bush called for a restoration of law and order. The allegedly anti-authoritarian Rand Paul said the unrest was about the lack of "a moral code." But you can bet that this reboot of Law and Order, as a major part of the fear-based GOP agenda, will get plenty of play over the next few months. If they hope to win, they'll have to rally their base and pull as many white voters as they can from the Democrats. Fear-mongering about anarchy in the streets is an evergreen strategy.

However, these days there are videotapes of precipitating incidents and social media to disseminate them. We aren't just watching riots in the streets anymore. The entire nation is also witnessing police brutalize and murder African-American citizens. And that, finally, hopefully, will tip the balance and we'll start to address the long-standing, great festering problem of police violence in the African-American community.