The disturbances marring the Baltimore protests have given rise to some real tall tales. 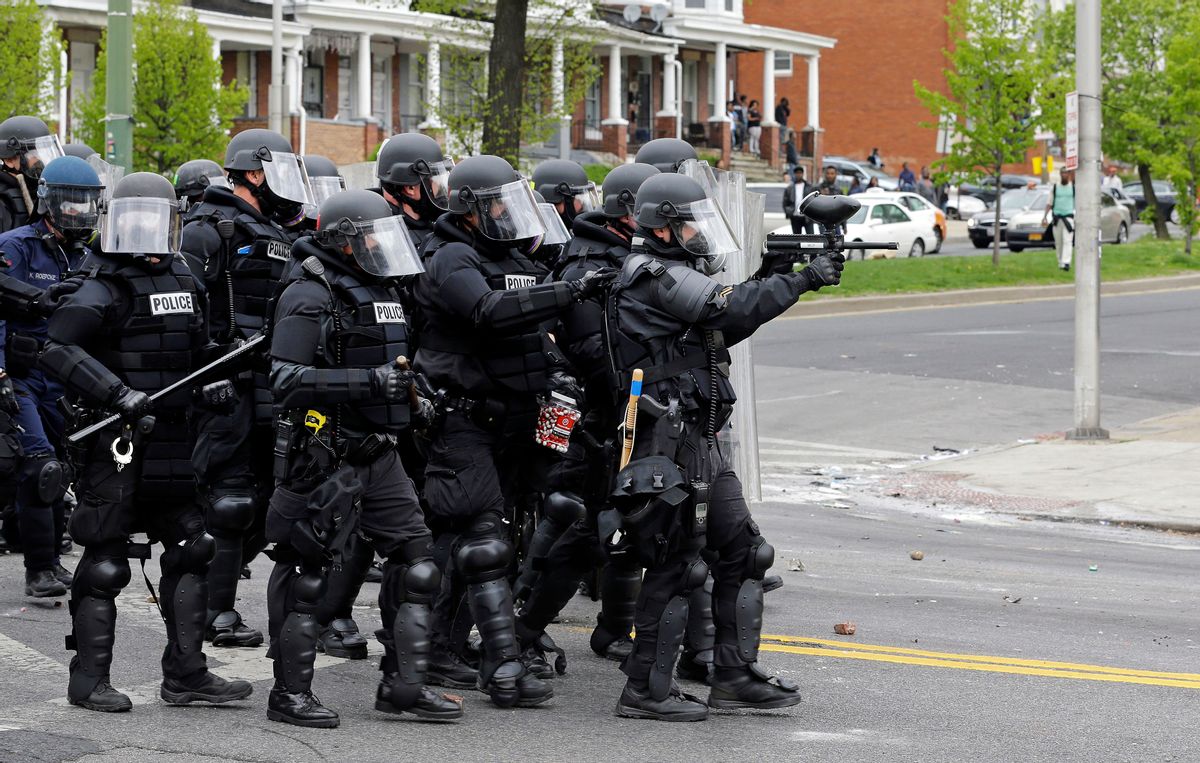 Police move down a street in response to demonstrators who were throwing objects, Monday, April 27, 2015, after the funeral of Freddie Gray in Baltimore. Gray died from spinal injuries about a week after he was arrested and transported in a Baltimore Police Department van. (AP/Patrick Semansky)
--

The protests in Baltimore in response to the unexplained death of 25-year-old Freddie Gray have brought out a kind of reactionary anxiety in people -- for black Baltimoreans, Gray's death sparked a desperate mixture of fear and rage directed towards the police department and various governments that have repeatedly failed them. For predominantly white conservatives, the protests symbolize deep vulnerability: America's poor are rising up against its rich and we are powerless to do anything about it. Because of that fear, many media outlets have rushed to report conveniently terrifying myths about Baltimore and its inhabitants. Here are some of the worst:

On Tuesday, WND reported that ISIS was taking advantage of racial unrest in the U.S. by recruiting young, angry black Americans. In the same article, however, the one quoted source Abu Saqer, leader of Islamist militant group Jihadiya Salafiya said, "he was not aware of whether ISIS actually recruited any dissatistfied black Muslims within the U.S." Okay then.

Photos depicting predominantly white sports fans having violent interactions with predominantly black protesters were widely circulated yesterday -- and many reported that the protesters were to blame. But The Free Thought Project's John Vibes reports that these explanations are deeply flawed. Vibes quotes, among others, Brandon Soderberg, a Baltimore City Paper reporter captured holding a white woman back from a black protester. In a Facebook post Soderberg wrote:

"There are pictures of me and my friends trying to stop a woman from provoking protestors. It is being used to suggest we were with her and protecting her... Drunk white people looking for a fight were part of the violence narrative last night. I have seen them jeer, spit, and throw things at protestors and try to hit them since Wed [sic] when protest first went downtown."

Another report from Medium found with a reverse photo search that many photos that people claimed to be from Baltimore riots had actually been taken years earlier.

3. Riots were started by a call for a "purge"

Media reported that after Freddie Gray's funeral concluded Monday afternoon, hordes of school-aged children gathered at the Mondawmin Mall in a call to "purge" -- a reference to the horror movie in which all crime is legal for one evening. However, Meghann Harris, a local teacher, explained on Facebook that students were forced off of buses by heavily-armed police. Bus closures meant that hundreds of students were stranded at the mall.

"They weren't doing anything," she wrote, according to Mother Jones. "No rock throwing, nothing... The cops started marching toward groups of kids who were just milling about."