"We have a distorted economy": Joseph Stiglitz sounds off on inequality, the TPP and 2016 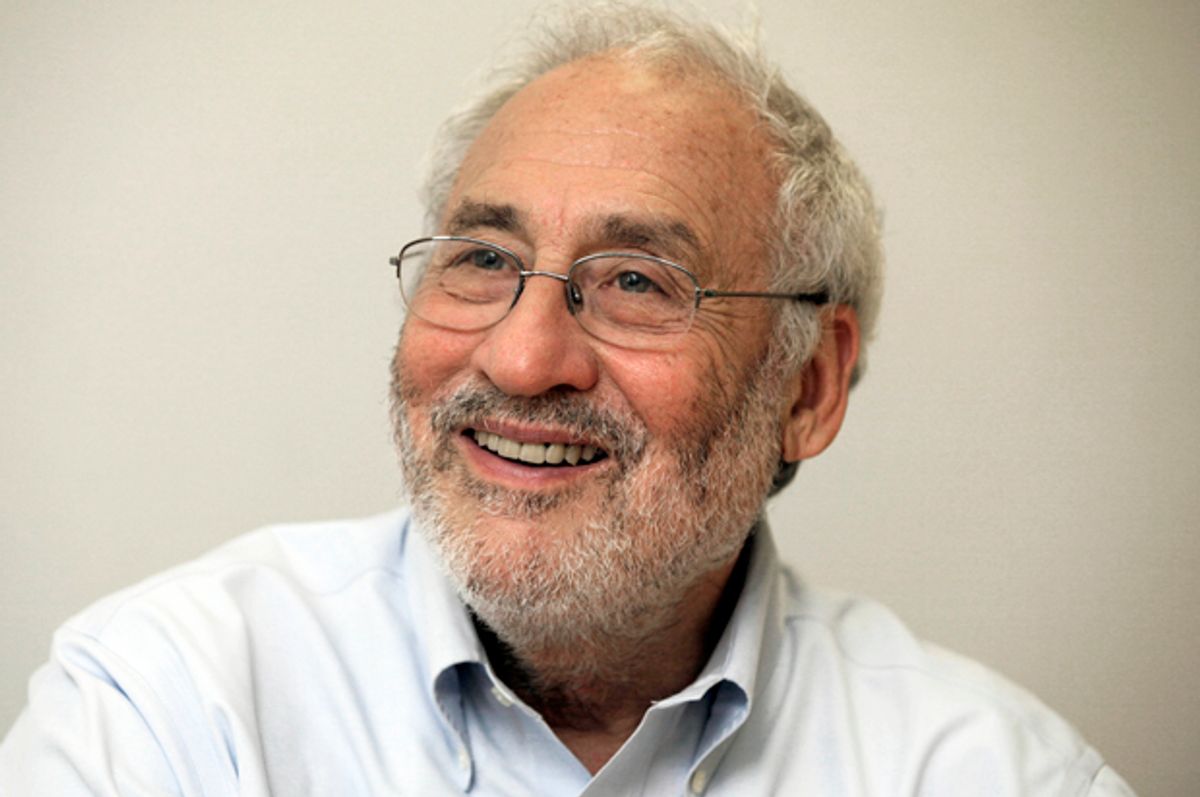 During the long run-up to officially announcing her second presidential bid, former Secretary of State Hillary Clinton quietly — but not too quietly — reached out to a number of leading progressive economists. Along with experts from some of the biggest unions in the country, the list of Clinton conferees included some of the biggest names in the (small) world of left-wing economics: former Clinton-era Secretary of Labor Robert Reich, for example. Yet out of all the so-called boldfaced names intended to draw lefty wonks’ attention, none inspired more cautious optimism than that of Columbia University professor and Nobel Prize-winning economist Joseph Stiglitz.

In part, that’s because Stiglitz, like his contemporary and fellow Nobel-winner Paul Krugman, is a brilliant economist who proves that, contrary to what many conservatives say, a firm grasp of the dismal science does not inexorably lead to libertarianism. More important, though, was his association with the problem of inequality — both on political and economic grounds. His 2011 piece on inequality for Vanity Fair made a splash (among the types of people who read Vanity Fair); and his 2012 book “The Price of Inequality: How Today's Divided Society Endangers Our Future” — which is now available in paperback — was an even bigger hit.

Recently, Salon spoke over the phone with Stiglitz about his new book, "The Great Divide: Unequal Societies and What We Can Do About Them," the roots of inequality, and what he wants to see from the 2016 presidential candidates to prove they’re taking the issue seriously. Our conversation is below and has been edited for clarity and length.

So this book originally came out in 2012, and now it's 2015. Are you more optimistic now than you were then? Or less?

I think the good news is the way that, in the opening shots of the 2016 campaign, candidates across the political spectrum have said that inequality is a major issue facing the United States. Sometimes they're not phrasing it exactly about inequality — some say the struggles of the middle class— but of course they’re talking about inequality and that’s very heartening. Obviously, when I hear reports about the amount of money that this campaign is going to cost, and the projections that it will be well in excess of what the last presidential campaign cost, which is $2 billion, I get depressed. Those campaign contributions, as I’ve said often, are investments, not donations. They’re investments in where the investors expect to get a return and that return is shaping our economy to serve their interests.

Republicans, especially former Gov. Jeb Bush, like to talk about a lack of opportunity rather than inequality. Does the distinction make much of a difference?

One of the more middle-of-the-road policy responses to inequality you'll hear about is improving education. But that point of view also has its critics. What do you think of that approach?

That’s sometimes called part of a minimalist apple pie agenda. I’m very convinced that that won’t go far enough and what’s happened in the last fifteen years, has made it even more clear that that won’t go far enough. Since the beginning of the century, even educated people have not been doing very well. They’re only doing well relative to those without a college education. So those without a college education, have seen their incomes really sink and those with a college education have been treading water. So what is going on is much more fundamental, it's much deeper than that. It is part of any agenda but it’s just a part and won’t really address the fundamental problems going on.

You make a point in the book of arguing that the 1 percent doesn't flourish because it's so much better than the rest of us, but rather because our economic system is in many ways rigged to their benefit. What do you mean by that?

One way of thinking about that is to try to think about the textbook model of economics — thousands of producers, competing with each other, each so small that it has no effect on price. Almost the only industry for which that is true is agriculture and that’s an industry where government presence is very, very strong and where government presence is basically designed as an agricultural program that helps the very big farmers with very little of the money going to the small farmers.

More broadly, there are a huge number of examples of this: in '93, we recognized the inequities of CEO pay and passed a law that said if the pay was so-called performance-related than it was exempt from the special tax that was put on excessive pay. Well, what that did is just open the floodgates and allow every company to re-label their pay as performance pay. Many of us pointed out that these new stock options— which were so-called performance pay — were very non-transparent. Shareholders didn’t know how the value of their shares were being diluted, and we tried to push for greater transparency, but we ended up maintaining this system that encouraged dishonest creative accounting and allowed these bonuses which have very little to do with actual incentive.

That’s a very dramatic example of a legal tax structure that benefits the one percent. At the other extreme, laws that have been passed that make it more difficult for unions, for workers to get together and unionize, globalization rules that almost encourage firms to invest abroad, allowing firms to threaten to move abroad if workers don’t accept lower wages and worse working conditions. All of that has weakened labor. So these are just a few examples by which our rules and regulations have empowered the top and disempowered everybody else.

You also argue that, ultimately, inequality on this scale is bad for everyone — the 1 percent included. Why do you think it's not in their best interest, either?

The idea is that a strong theory and empirical evidence that inequality is bad for economic performance, that it leads to lower growth and more instability. Back in 1980, the Reagan team said, Let’s try this new experiment of supply-side economics, where we lower the taxes on the top and they said don’t worry that this is going to lead to more inequality, the people at the bottom are going to benefit, because we're going to get more growth. There’s no evidence for that, and now thirty-some years later, we have the results of that experiment. The combination of lower growth and a lower share of what growth has occurred--in fact negative shared--meant that the people in the middle and on the bottom have been worse off.

Now, you run that engine in reverse, that reasoning in reverse and you say, well, if it is the case that we actually grow the economy better by having more equality, then it’s at least conceivable that those at the top might get a smaller share than the outrageous share that they’re getting today, but the pie would be bigger and they could actually be better off. But I don’t think the one percent wants to live in gated communities; I’ve visited places where there’s a huge amount of inequality, and the quality of life of the one percent isn’t that great. They live in gated communities, there’s an unpleasantness about the nature of their society. That’s a direction to which we may be moving, if we don’t deal with the inequality we have. So I would say that, would I rather live in a society where there’s sort of a sense of community and a sense of purpose, a sense of fairness, I think it’s a much healthier community to live in. And all of us live in a community; none of us are really that isolated.

What would be some of the policies that the 2016 Democratic candidate could realistically run on to combat inequality that would excite you most?

I think I would be the most excited by a candidate that really takes seriously this issue of equality and equality of opportunity, addresses it in as many dimensions as possible, and goes beyond what I would call the minimalist agenda— more education, minimum wage— and begins to work on the most important things that will ensure that the middle class will have access to the basic ingredients that make for a middle class life. That means beginning to work on the underlying structures that are referred to the institutions that have lead to such inequality in before tax income, in market incomes. That begins to say that when we have a tax system that rewards speculators more than people who work for a living that distorts our economy. We don’t want our most talented people to go into speculation; that can lead to even more instability. We have a distorted economy, and that’s a result of the choices that we’ve made and we ought to be making different choices. We can do that! There’s not reason that capital should be taxed at a lower rate than people who work for a living.

Finally, there’s a whole agenda, I think, that could directly address some of the plight of average Americans— make it easier for people to get to jobs and public transportation, make it easier for a woman to work through support of child care or family-leave policy. Basically trying to help every member of our society participate meaningfully in our society.

Last question: You've previously expressed opposition to the Trans-Pacific Partnership trade deal, but that was a few months ago. Have you heard or seen anything in the time since to make you feel more positively toward the proposal?

No, I’ve actually heard several things that have made me more adamant in my opposition. I’ve talked to the health negotiators around the world. I’ve talked to people who’ve been involved in the arbitration process as part of the investment agreements. Even people who are arbitrators say the whole system is corrupt, that it’s a very expensive system, that therefore creates an un-even playing field with big corporations with big, deep pockets can get access to have recourse, whereas smaller firms can’t. That American firms can re-locate or do their investments in the United States as a subsidiary, sue the U.S. government in ways that they could not if we didn’t have that trade agreement. In other words, what we’re doing is changing the legal structure for the United States, not only for foreign firms. Because an American firm can become an American firm overnight. So this is a very big deal.

It’s not just a trade agreement, it’s a really major change in a legal structure. And I don’t think it should be taken lightly. I don’t think it should be adopted on a take-it-or-leave-it basis, that’s associated with fast-track. I think each of these issues themselves need to be debated, voted on separately. The bottom line is, if anything, I’ve been more resolved in my opposition.