I secretly lived in my office for 500 days

Unable to pay rent in L.A., I slept behind my desk. But what began as a quick financial fix soon became a lifestyle 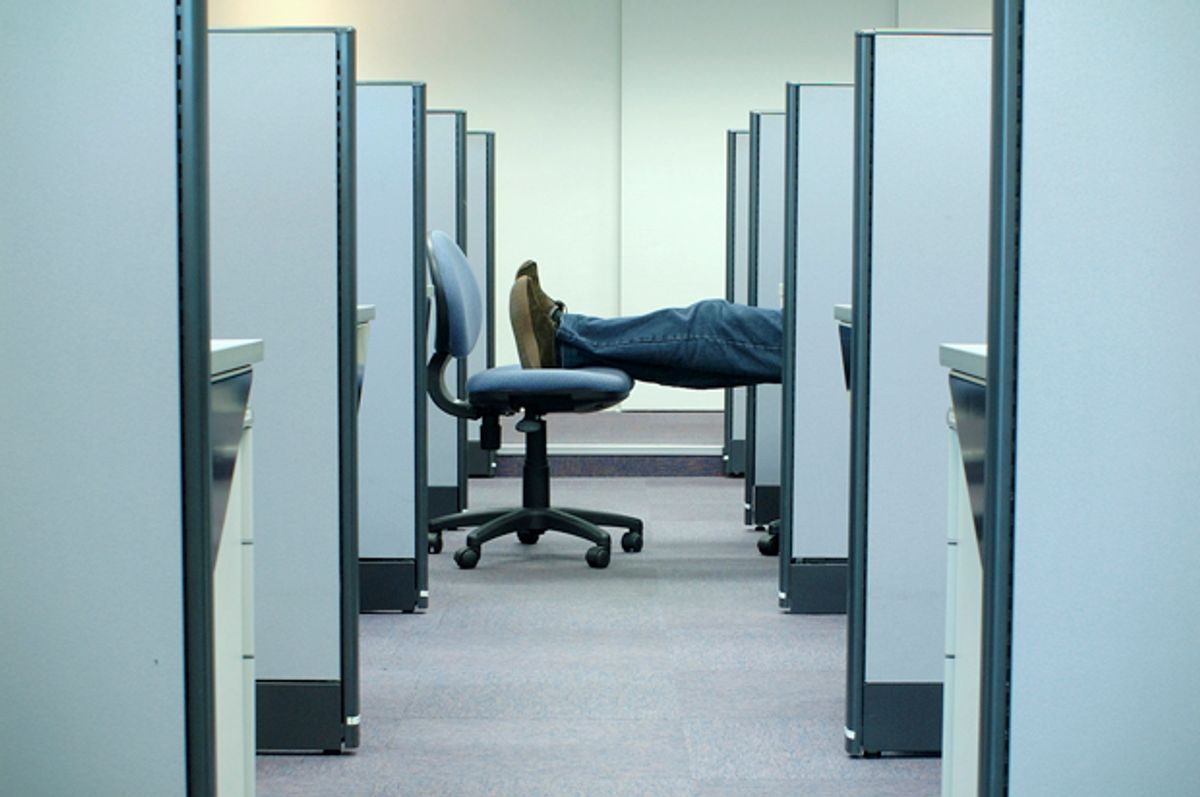 I was asleep when I heard the door rattle against the frame. My eyes flashed open and I sprung upright in my under-desk sleep space. Was it all over? Had someone come to work early? I peered over my desk, afraid of what I might see. The morning sun burned through the chicken-scratch graffiti of the office’s front door, spilling across the labyrinth of desks spread out before me. There wasn’t a soul in sight. I breathed a sigh of relief. Probably just paranoia. Or maybe not — a breeze blew the front door against its frame, the pygmy-like rattle of a loose door jamb. It was the same sound I heard moments before and would hear countless times in the future but never quite get used to.

A little paranoia goes a long way when you live in a 10-square-feet workstation. I stood up, stretching my limbs toward the sky like a thawing, cryo-preserved humanoid, neck kinked and back stiff. I bent down to deflate my air mattress. The clock read 6:45 a.m. Under normal circumstances I’d still be asleep, but these circumstances were far from normal.

Earlier that week, I had moved into my office. Secretly. I rented out my Venice Beach apartment for the month, packed a few duffels with my clothes and prized belongings, and started taking up residence behind my desk, carefully using each square inch of out-of-sight real estate to store my stuff. Not everyone aspires to have their co-workers catching them at their desk in their tighty-whities—at 6 in the morning. Believing the absolute best-case-scenario reaction to my being there would be supreme awkwardness, I kept the whole thing to myself. Every morning I’d neatly pack away my personal belongings, turning the lights back on and lowering the air conditioning to its too-chilly-for-me 72 degrees—the way they always left it overnight. I’d leave for a morning workout and shower, simultaneously keeping clean and in shape while ensuring I wasn’t always the first to arrive. Occasionally I’d even make myself late to work, blaming the awful L.A. traffic. Just to fit in.

If living in the office seems like too much effort, it was a cakewalk compared to making monthly rent payments.

It had been two years since moving to Los Angeles and, like many Angelinos, I was broke. I stretched the definition of affordability by taking a studio apartment within 20 minutes of work, cramming my belongings into 250 square feet of glorified tenement housing while my savings vanished like a roach in the daylight. I put my dreams of traveling and writing on hold so I could stabilize my living situation. I figured I could suffer for a bit in the meantime.

By the summer of 2012, those dreams gave way to a nightmare. I’d been working two jobs — 60 hours a week to keep an apartment I rarely had time to enjoy. Then, disaster struck. Company raises and bonuses were frozen. My identity was stolen. I got a hefty hospital bill for a surgery earlier that year. With existing student loans, a car payment and my rent set for its maximum-allowable annual increase under the California law, I started to wonder: What happened to my American Dream?

I had little left to sacrifice. Without money, I had two choices: Give up my dreams of working creatively or surrender my time working even more. Either way, the outlook was gloomy. Until I remembered my ace in the hole.

A few months earlier, I stopped by the office on a late-weeknight assignment. Everything around the place was closed. The land of business plazas was a veritable ghost town, a blank spot on the map, stripped naked from the daytime bustle. Around that time, the news was filled with stories about an influx of U.S. congressmen taking up residences in their D.C. offices. They were converting perfectly livable, neglected space into their own white-collar Walden for the working man. I wondered if I could do the same. But before it became necessary, it seemed impossible.

Yawning myself awake in an empty office, that impossibility disappeared. So what if there was sacrifice? Waking up with a pumping adrenal gland wasn’t ideal, but it was better than lying in bed knowing your hours were auctioned off to a status quo you never wanted in the first place.

I was never one to value money over time. Growing up in a small town near the Gulf of Mexico, life was more about community than profit. My parents stressed achievement, but championed leisure. My sister and I were pushed to make straight A’s, earning annual road trip vacations to diverse locales—beautiful Fort Walton Beach, Florida, historic Williamsburg, Virginia, or rustic Bangor, Maine. Our dollar seemed to stretch further than other families'. When my sister became a lawyer, I drifted slowly into the arts. I pushed aside my sexy-school graduate degree to pursue acting and writing, taking a 40-hour-a-week job to pay the bills.

I’m not your average homeless person. To many, I look like the typical middle-class young professional — clean-cut, well-spoken, well-dressed, hygienic. But what is the average homeless person nowadays, anyway? The once-wide chasm between “homeless” and “middle-class” has shrunk to little more than a fault line, over which many find themselves standing in a precarious straddle, a little bad news away from losing it all.

Living at the office remains a unique solution to overpriced housing woes. But there are alternatives. Many working folks, balancing skyrocketing cost-of-living with grounded wages, are employing their own varying degrees of minimalism. From starving artists living in their vehicles to the middle class moving into tiny homes, from dumpster-dwelling college professors to Volkswagen “vanimal” Major League Baseball players, how Americans are defining “home” is changing at all levels of the socioeconomic scale.

The traditional definition of home isn’t always friendly to the neo-minimalist middle class. The Oxford Dictionary defines the term in a variety of ways, with its fourth listing providing perhaps the most progressive description:

A place where something flourishes, is most
typically found, or from which it originates.

For folks like me, this essence of home is fundamental to our existence. Instead of “homeless,” I prefer to use the term “home-free." It champions choice without undermining the challenges faced by those without it.

Indeed, what started as a temporary financial solution turned into a lifestyle. I grew to prefer it. Impending debt morphed into growing savings. Sleepwalking through two jobs to squeak by gave way to a wealth of free time. My spending habits ground to a halt, my savings ballooned. I gave up my apartment entirely, shed a great deal of my belongings, and committed to a life of salaried simplicity.

My routine became more essential, flustering less and less about meeting the lowest levels of Maslow’s hierarchy of needs. I took off to the Caribbean for two summer weeks to film a movie. I celebrated New Year's with a lovely lady in South America. I started reading again. Started writing. Living this way forced me to engage my passions. I socialized more often, spent more time outside. My day-to-day—once orbiting around keeping an apartment—now held gravity to my passions. I was happier. People began to take notice.

One morning, close to my anniversary of office living, I woke up to a message from my boss about my annual performance review later that day. We sat down across from one another and she looked me straight in the eye.

“I’ve noticed a big difference in your performance this calendar year,” she said.

I asked if that was a good thing, curious what she was getting at.

“Good? It’s been great,” she said. “I don’t have a single criticism. You seem happier lately, too.”

“Well, I think I know what I can attribute that to,” I said, smiling.

Living in the office had many unexpected perks. But it was far from a permanent solution. When the company started to show signs of budgetary collapse, I began to plan for my future. What did I want life to look like post-office? An old friend, Robert, was moving into town that January, offering to be my roommate. Robert was a filmmaker, a great contact in the industry and a trusting person. We started looking for apartments.

But something seemed off. Having spent over a year rent-free, I realized I valued how I spent my expenses differently. Dropping over a grand every month on a single budget item felt like it ought to result in overwhelming returns. Instead, the housing options were bland. Each had a laundry list of glaring flaws—aging units with no parking, thin walls with no outdoor space, poor walkability and a long commute. What’s more was the sense of entitlement on behalf of many landowners, like I was doing them a favor by handing over 40 percent of my income for a glorified doghouse. The transaction felt oddly imbalanced, a product of seriously misplaced supply and demand.

When Robert and I talked next, I told him to continue the search without me.

I lived in the office for 500 days. Ultimately, the company went under. I was part of the first round of layoffs. I lost my job and my home all in one, but I saved over $20,000 in living costs and 216 hours of commuting.

Before my last day, I was asked to interview with a competing company. I was admittedly underqualified for the job—an executive-level position with endless work weeks and million-dollar fundraising goals. Interviewing for it felt like dating the supermodel just because she said yes. I nearly declined, but a nagging voice in the back of my head convinced me otherwise.

At the end of the interview, I knew the job wasn't for me. But there was something my curiosity couldn't shake.

"Do you have any questions for me?" asked the interviewer.

"Actually, yeah," I replied, smiling. "Tell me about your office."

I didn't take the job.

I sleep better nowadays. Recently I found myself waking up before sunrise, but this time it happened slowly, taking care not to hit my head on the low, carpeted ceiling above me. I looked out the passenger-side window. The moon reflected off the water as the sounds of the swells tickling up against the rocky shore echoed past my Pacific Coast Highway roadside parking space.

I was in the back of my truck, atop a twin-size memory foam mattress edged between a mini bookshelf and multi-functional cabinet/shelving. This is my new place of residence, a custom-built tiny home on four wheels, great for overnighting at a series of vista points and national forests along the way to Oregon.

I finished building it before I left the office. Everything I needed—a plywood base of shelving housing a tiny fridge, a portable butane stove, a sturdy water jug, a paper towel rack—I was fortunate enough to purchase while money was good. Mostly I stay local, picking up odd jobs while writing, pursuing the career I’d always wanted but never had the time to try. It’s a different routine from the office. It’s Henry David Thoreau meets Henry Ford.

It’s not for everybody, either. But I’m happy. On the average week, I pack 20 hours of work into a few days —  one part-time gig working security in Hollywood and another working with mostly disadvantaged youth —  leaving the rest of my time to write. It lacks the material benefits from my full-time days, but the benefits outweigh the negatives. Now I take my home with me wherever I go.

What more could I want?

Terry K. is the nom de plume of a man who, in his not-so-secret life, is a budding writer, documentarian, traveler, and odd-jobber. Follow his story on his blog, www.theofficehobo.com.