Teen girls protest school’s sexist prom message: "There are no posters that say 'protect his character'" 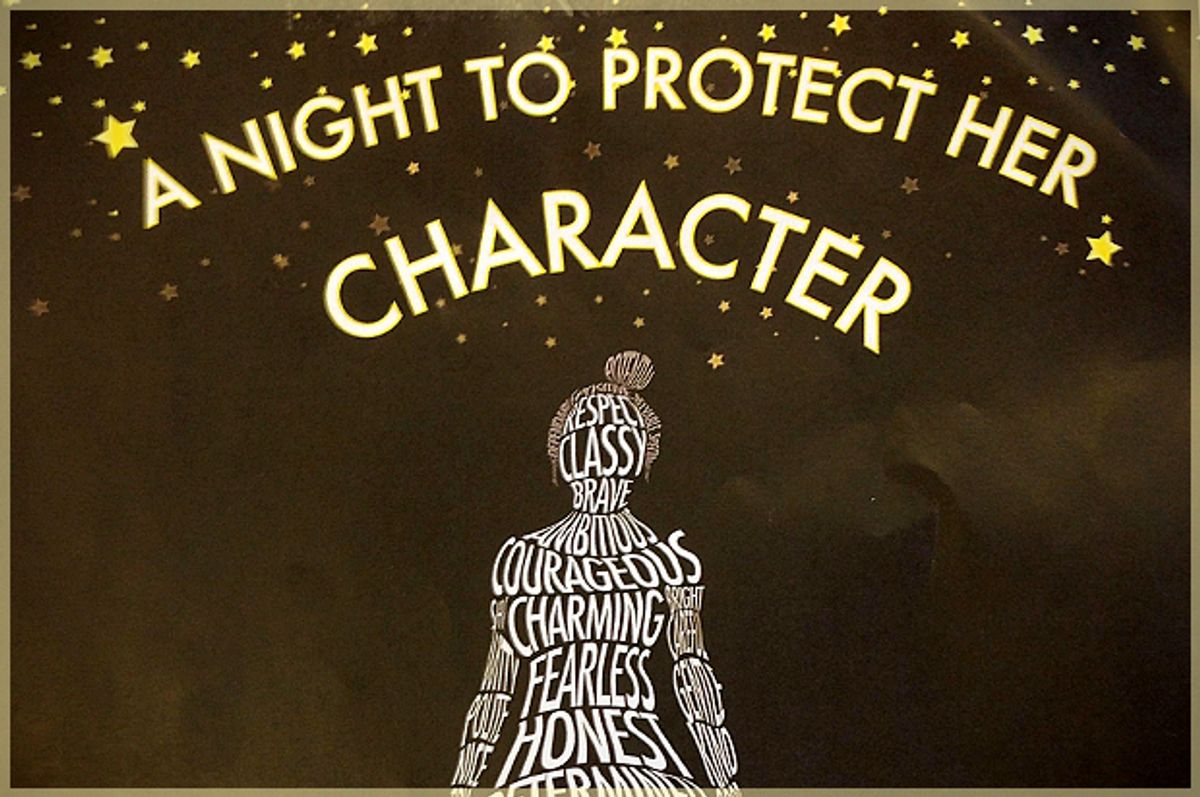 Sure, it has been amply demonstrated again and again that sending in the Christian enforcers to prevent teen pregnancy does not work.  And hey, I thought the Constitution was supposed to protect our public school students from overtly religious instruction. But it's prom season, so let's do this, virtue-leaning young ladies and gentlemen!

Students at Manitowoc, Wisconsin's Lincoln High School noticed this week that their prom poster described the event as "A Night to Protect Her Character" -- not quite the typical theme for this sort of thing. And the image featured a silhouette of an elegantly attired female created out words like "respect," "classy," and, oddly, "tidy." Of note also were the logos of the local Christian "pregnancy advice, counseling, parental training, and community support" organization The Crossing and Holy Family Memorial, and that the poster had been signed off by the school principal.

On their site, The Crossing said of the campaign that "Prom time seems to present particular risks for teens. Our poster and outreach programs are intended to raise awareness of some of the potential risky behaviors often attached to prom night. We hope that these posters will remind and encourage teens to embrace healthy responsible behaviors so that prom will be a 'night to remember not a night to regret.'" And Holy Family echoed the sentiment, stating that "This poster was one part in a series of timely social messages reinforcing the importance of values such as confidence, honesty and determination. We firmly support the message of promoting healthy and responsible behavior among the youth of our community." The school district, meanwhile, says that "No particular religious standard or expectation was being promoted. Social media reaction has demonstrated that any message can be interpreted in a wide variety of ways, many never contemplated or intended to be part of the original message."

While there words "Jesus" or "virginity" are nowhere on the poster girl's dress, however, the message is hard to miss. As Senior Kelsey Schindl told reporters this week, "The insinuation that if you do have sex then you don't have any character anymore is a horrible message to send. And there are no posters that say 'protect his character.'" She added, "Last I checked, sex is consensual and a mutual decision you make together. But according to the poster, just the man decides." And while the posters seemed to promote the image of a female as "honest, determined, independent," there were other less empowering descriptions as well. "Shy and tidy and quiet, and good really bothered me," Schindl says.

In no small part thanks to the public attention the poster's received since Schindl brought her concerns to the principal on Monday, the school has now taken it down. In a statement, Lincoln High officials said the school "hopes that the focus of prom can return to what should be a positive social experience for our students." It's not that any rational person would have an objection to the message of respect for females. But why frame it in terms of protecting her "character"? And if you're behaving in a way that's not respectful to women, that's a failure of your character, not hers. So where's that poster?