So that happened: A really crazy half-hour of TV 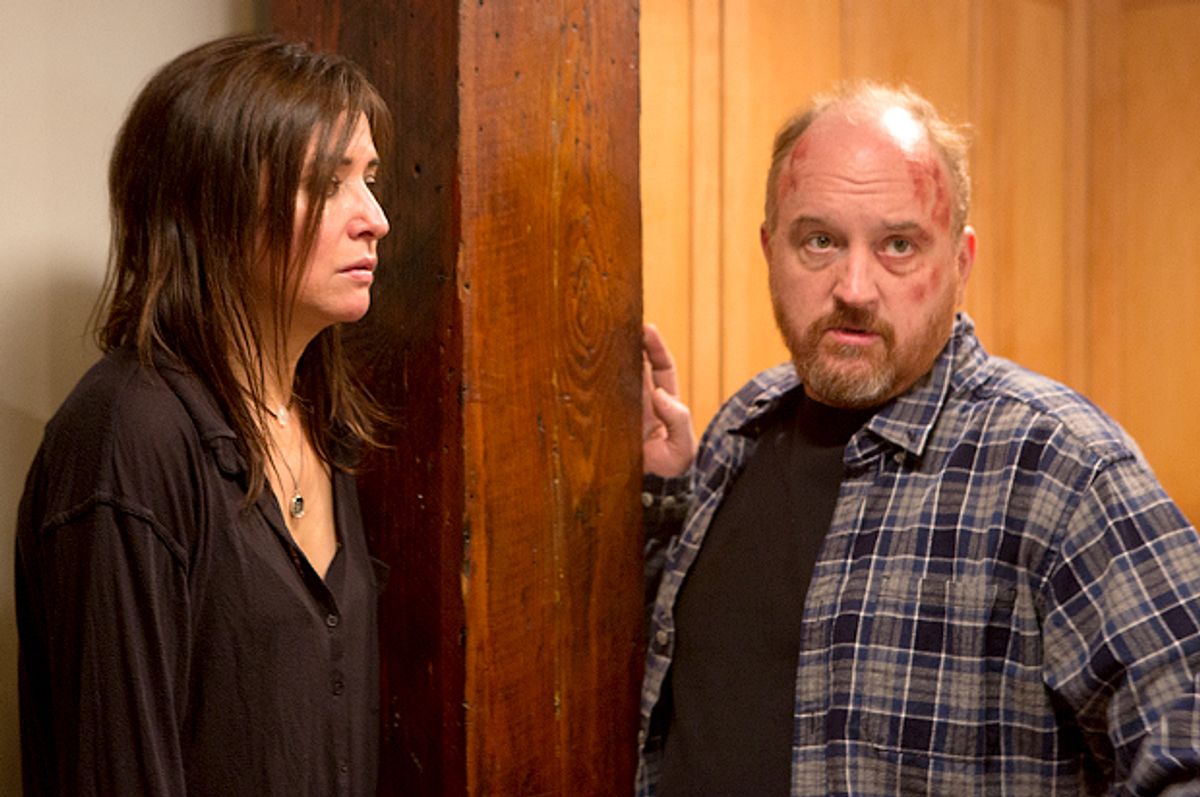 Last night’s episode of “Louie” is a surreal, tragic and utterly brilliant short film. I mean, they all are stand-alone gems—the FX comedy is a very episodic show, on the whole. But I think “Bobby’s House” might be one of the show’s most daring endeavors—an emotional roller coaster through sex, gender and vulnerability, starting with Louie asleep on his couch, before he’s interrupted with a phone call. That’s because this is an adventure in which the Louie of “Louie”—written, directed and starring Louis C.K.—becomes, for all intents and purposes, a woman. He wears makeup, cries after sex, and is fucked by his partner: The episode’s conceit is that with each passing minute, Louie is losing a bit more of his masculinity, replacing it with characteristics that are traditionally coded feminine.

But as provocative as this episode is for its daring—particularly for the sex scene between Pamela (Pamela Adlon) and Louie, where she first gives him a full face of makeup, then fucks him in the ass, and finally breaks up with him—what struck me was how tragic “Louie’s" experience of femininity is. “Bobby’s House” is not a happy story, and Louie is feminized by being taken advantage of—beaten up, bullied, broken up with, reduced to tears, and in the final scene, laughed at. He might even come away from “Bobby’s House” raped—the sex scene depicts Pamela, with her hair tucked under a baseball cap, presumably penetrating Louie without his express permission, and the moans and groans we hear are more of pain than they are of pleasure. It’s a short scene, and the scene immediately following is an intimate one, which leads me to believe that “Louie” is either avoiding the question or deliberately leaving it vague. Whether or not that’s your interpretation of the scene, it’s clearly not a pleasant moment. Louie’s experience of being “female” is a parade of horrors.

To some degree, that’s because the worst-case scenario is one of “Louie’s" specialties. “Bobby’s House” is a nightmare predicated on the fear of a man losing his masculinity, even for just a moment. I can see Louis C.K., in his stand-up, jokingly asking something like: “Dude, chill out. What’s the worst that could happen?” Well, the worst that could happen ends up happening in “Bobby’s House.” The very first shot of Louie in this episode is of him napping on a couch before being abruptly woken up by his brother Bobby, and even though Bobby’s call doesn’t quite begin the episode’s dialogue with gender, it does serve to color everything that follows as a weird, surreal dream.

Indeed, one of the weirdest things about “Bobby’s House” is that it’s called “Bobby’s House.” Of the three major vignettes in the episode, only the first has to do with Bobby, and it starts in a strange, completely unexpected way: Their uncle Jack has died, and Bobby would like Louie to drive them both to the funeral. Louie panics, but it’s only when both brothers show up to the funeral home and find that it’s full of Vietnamese people (or, at least, that’s their guess) that they realize some other man named Jack Butts died. Bobby didn’t bother to confirm that the Jack Butts in the obituary he read was in fact their Jack Butts, and his slapdash, time-wasting carelessness visibly gets under Louie’s skin, especially as Bobby seems to be uninterested in apologizing or making it up to Louie.

Which leads us to Bobby’s actual house, which is where Louie drops him off before heading home himself. Bobby exhorts him to come up and see his place. Louie doesn’t want to. Bobby insists. Louie caves. And the two brothers, wearing matching suits but different neckties, sit on Bobby’s enormous and plush chintz sofa and talk a little about life. Bobby launches into his troubles very quickly, mixing praise for Louie’s life with despair about his own. Bobby is kind of an idiot—he forgets that Louie is older than him, not younger—but his plight is real, and kind of sad. He can’t have children, he’s single, and he’s unable to talk about himself without getting defensive or uncomfortable; in his own words, he has “no money, no skills, no Twitter.” He and Louie sit on either end of the couch, taking up what feels to both of them like an awkward amount of space, but they can’t really connect.

The next morning Louie goes to the bus stop and a woman attacks him. He minimally provokes her, it’s true, but her response is disproportionately violent. She’s not particularly imposing, either, but Louie is hamstrung by his own desire to not resort to violence—either because she’s a woman or because he would prefer not to—and as a result she beats the crap out of him. It’s a long scene, one that wavers between comic and tragic. He’s just so hapless that it defies the audience’s expectation, but he’s actually in pain, actually getting hurt. When he gets home, his daughters have the same reaction, but flipped: first concern, then laughter. “Was she pretty?” asks the younger, who laughs first. “I’m sorry,” says the older, trying to keep a straight face.

Louie then goes to his girlfriend Pamela, and she laughs, too. He asks her to cover up some of the bruises, and she responds with—quite unexpectedly—arousal. She convinces him to let her make him up as she would a woman, and though she goes pretty minimal—a smoky-eye look—they’re both moved. Louie is taken aback at how good he looks, and rather innocently gazes at himself in the mirror; Pamela is turned on. She affects a masculine swagger and drops her voice; she’s “Peter,” meeting a woman for the first time. And then they bang, with the aforementioned questionably consensual pegging, one of those rare acts in heterosexual sex that offers a woman penetrative control. Afterward, Louie tries to talk about his feelings, and Pamela rebuffs him, before finally (and somewhat tenderly) breaking up with him. Louie cries, ruining his eyeliner. At this point, the gender role-reversal is so overt that C.K. is consciously mimicking what women in movies say when they’re being broken up with, and Adlon’s posture is determinedly loose, spread out and masculinized. And the final straw of this nightmare is when he later meets Bobby for lunch, Bobby laughs and laughs and laughs at him, not even bothering to hide his amusement.

It’s an episode that is going to provoke a lot of different reactions from “Louie’s" audience, which is the most important part (and in all likelihood, the intended effect). “Bobby’s House” is a funhouse of critical-theory titillation, from the Freudian (dream-state, missed-death, a man lamenting that his testicles are “a bag full of dead sperm,” and you know, castration) to the fluidity and performance of gender (makeup, sexual dominance, violence perpetrated by women, and stereotypical gender roles). Mostly, it says something bold about C.K., who has proven himself willing to delve into a lot of complex things, emotionally and physically, in order to further understand himself (and entertain us). “Bobby’s House” is an exercise in dismantling and rebuilding performance as much as it is an examination of the restrictive gender norms both men and women are pushed to live with.

But the more I think about it, the more it seems like the point of the episode has to do with the titular Bobby, who is a total sad sack (in a depressingly literal sense of the word). He is kind of a bumbling disaster, and Louie is quite the opposite. What finally brings Bobby and Louie closer together is Bobby being able to witness Louie brought to his knees. It’s not just misfortune, it’s degradation. Louie has lost the most important thing of all—his masculinity. It doesn’t matter that Louie has two children, an ex-wife, a career, working sperm, and, at least as of 12 hours ago, a girlfriend: He strayed into the feminine, and as Bobby’s reaction indicates, that is a plight deserving pity, scorn and raucous mockery. Bobby’s place in the world isn’t great, but at least it’s male.

Note: An earlier version of this article stated that the "Louie" episode was titled "Bobby's Place." Apparently, FX had titled this episode "Bobby's Place" but then changed it, before air, to "Bobby's House." The article has been updated, though unfortunately now the last line doesn't sound as cool.