During 10 years as a pig farmer I came to know pigs as well as I know my own dog. That's why I quit 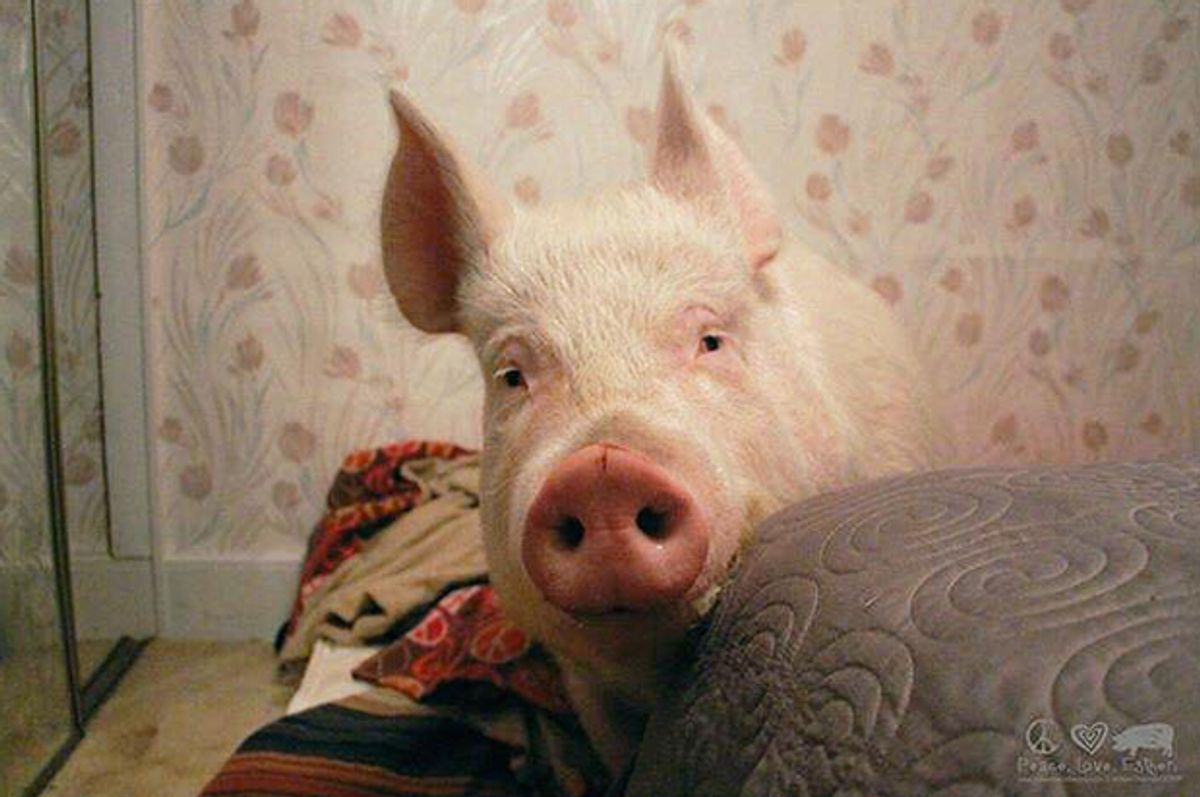 There is a pig out there who lives with a family of humans, dogs and cats, not other pigs. Her name is Esther, and we should all get to know her. Her human family members, Derek Walter and Steve Jenkins, believe she is wondrous, so her name is not just Esther. It is Esther the Wonder Pig. Derek and Steve believe that Esther is so wondrous that they turned Esther onto social media. She has her own Facebook page. She is on YouTube. She even tweets. Over the past couple of years, Esther has garnered quite a following – her Facebook page has more than 275,000 likes. Among vegans, vegetarians and people in the animal compassion communities, Esther is a celebrity. Esther is the it pig.

Esther started out as a small “mini” pig that Steve and Derek adopted from a friend who couldn’t handle having Esther as a pet. Esther the mini pig. As is so often the case with mini pigs, not so much. Once home at Steve and Derek’s townhouse outside of Toronto, Esther, who was actually not a mini pig at all, but a baby commercial pig, quickly grew from mini straight past big beyond huge to humongo. She now weighs over 600 pounds, and is more than 5, maybe even 6, feet from nose to tail. Six hundred pounds or not, Esther is quite a cream puff, and a total ham (the good kind) for the camera.

Scrolling through Esther’s social media accounts and her website, you can see pictures of Esther in the house lounging on her bed, on Derek and Steve’s bed, or on the couch (she is quite the lounger), and of her snuggling with her canine siblings (with her feline siblings nearby – feigning feline aloofness, of course). You can also see pictures and videos of her hamming (again, the good kind) it up as she sits or stands, waiting patiently with that pretty pig smile on her face for a treat like pies, often homemade by her loving humans. You can also see Esther running and playing in the backyard. You can see her being mischievous, and, as any 600-pound adolescent will do, wreaking havoc. The videos and pictures are captivating. They are simply a joy to watch. I never tire of them. I love Esther.

However, there is more going on here than mere entertainment. The videos and photographs of Esther elevate her from an abstract idea (practically none of us have any direct experience with pigs) to a real, concrete, individuated being, placing her, in terms of our ability to relate with and to her, on par with the family dog. Esther is clearly a unique individual being, with interests that are personal and particular, and that should be fostered and protected. She has great emotional, psychological and intellectual capacities. She is a being that one can bond with. Esther is every bit as dear as Fido.

And, this is evidently so. In spring 2014, Derek and Steve launched an Indiegogo crowd-funding campaign to fund the purchase of a farm where Esther would be able to fully express herself (her life in the suburbs of Toronto is somewhat limited) and that they would turn into a farm animal sanctuary. In just 60 days, nearly 7,500 people together contributed a total of $440,245 (CAD), nearly half a million dollars, and 10 percent more than the funding goal, so that a pig could move to a home better suited to her. That is a lot of love.

How is that possible? It is possible because Esther is so absolutely endearing. She seems so unique and unusual. She seems set apart from all of the rest of the pigs in the world. When we see Esther, we don’t see a pig, plain and simple, we see a wondrous pig, different and more extraordinary than all the rest of the pigs in pigdom. Esther strikes us as one in a million, maybe even one in a billion. Esther seems, then, in a word, special. She seems so special that to kill her would be a crime.

For about 10 years, until November 2014, I was a pig farmer. As a pig farmer, I raised pigs to be killed so that people, myself included, could eat their meat. Over those years, I spent well over 10,000 hours working closely with pigs. I came to know pigs – pigness, that is, what it fundamentally means to be a pig – as well as I know my own dog (and I use “my own” here in the same way I say my own brother, not as property, but as a cherished part of my family). Ultimately, I came to know pigs so well that I could no longer see what distinguishes a pig from a dog, or, on occasion, even from me, and for this reason, I quit pig farming. I did more than that. I adopted a vegan diet.

With this brief biography in mind I would like to say that there is nothing, literally nothing at all, special about Esther the Wonder Pig. She is wondrous. She is a unique individual with distinct interests and particular tastes. However, in terms of how she lives her life with her family, she is perfectly ordinary. Esther is not cute, lovable and loving, smart, playful, mischievous, gentle, well-mannered, mirthful, gregariously snuggly and fastidious because she is special. She is all of those things, so powerfully all of those things, because she is a pig. That string of adjectives does not describe Esther alone. It describes the very heart and soul of every pig on the planet. It describes pigness. Truth be told, and it should be told, any pig anywhere in the world living in a situation similar to Esther’s – granting personality, emotional and psychological uniqueness – would act and behave just like Esther.

Simply put, Esther is every pig. Every pig is Esther. If you love Esther, you love all pigs. If you think Esther’s life is cherished, you think all pigs’ lives are cherished. If you think to kill Esther would be a transgression amounting to murder, you think killing any pig would amount to the same.

At this moment, more than 60 million Esthers are languishing in pig production factories in the United States alone, a few million of whom are confined to barren metal crates so small they are unable to walk or turn around. As for the rest, they are doing their best to retain some semblance of their pigness, as they live crammed together in spaces too small and in groups too large for their instinctive, hierarchical social calculus to comprehend, making them live in anxious uncertainty about their place in the world. They spend every moment living on hard, unforgiving concrete floors; their powerful interests and desires to root, to forage, to run, to play, to bask in the sun – to do the very things that make them pigs – go woefully unmet as they pursue the one interest they are allowed to satisfy, eating. They belly up to the trough and eat, unwittingly growing themselves into meat. While their lives might indeed be better, the fate of the few 10,000 pigs raised outdoors on small pasture-based farms like mine is no different. They too become meat.

Making meat is not benign. It takes a life, a life that not only by its very nature, but by our own reckoning – by the joy Esther brings us and the love we feel for her – is precious. In order for people to satisfy what amounts to a mere gustatory craving, the beautiful essence, the fundamental core of Esther’s pigness, her being, must be wantonly and utterly obliterated.

I know this. I know this because I spent a quarter of my life sharing time with and taking care of a couple thousand Esthers. I know this because on the day that I finally came to, I realized that my efforts to raise pigs humanely had failed: in nearly 10 years I had never looked into a pig’s eyes and found them empty, vacant; they were always vibrant and full; there was always someone looking back at me, someone wondrous, someone sacred.

Note: Background details about Esther and her family come primarily from the Huffington Post article “Esther the Wonder Pig Is a 500-Pound House Pet, and So Much More” by Arin Greenwood.