The free market is destroying my school

As a janitor, my job is in jeopardy. Sadly, so is the education of thousands of students who depend on us 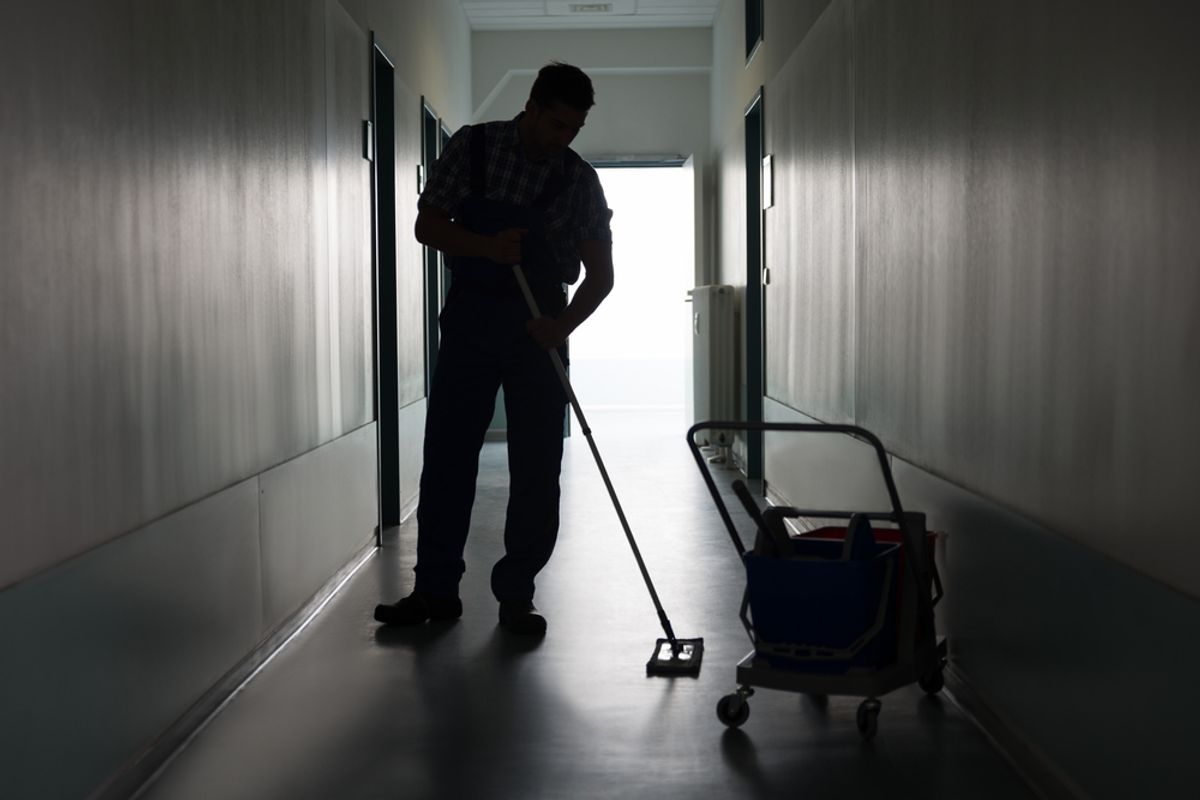 At work they’ve started sabotaging the machinery that keeps the buildings functioning. It happens late at night and no one really knows quite how it’s going down, but they know for certain that someone or a small group of people is going into the mechanical rooms that regulate the buildings’ temperature, power supply, water flow, air flow, and countless other vital functions, and they’re shutting off machines, breaking others, turning the temperature up to stifling or down to freezing, sending too much water through the pipes, and even smashing the machines themselves, leaving the campus buildings in disarray. The most likely culprits are janitors, like myself, and Security has asked us to report any information we might have about our co-workers to a supervisor or CrimeStoppers (“Crime doesn’t pay. CrimeStoppers does.”). It’s highly unlikely that anyone will comply.

I don’t work the night shift. Those university halls are cold and gleam barrenly after dark and I refuse to work the night shift in fear it would be like an endless lonely dream stripped of all content. At this time of the year, the heart of Canadian winter, it already seems like you’re living on some depopulated planet. The streets are a sickly white and the buildings look like an unpainted stage set. Everything shimmers with dormant violence. People feel the pitiless cruelty of nature in an almost Paleolithic way and they get hostile and depressed. Even with my shift, which begins at 6 am and lasts until 2 p.m., I feel half-dead and half-asleep, somnambulistic. I start to lose my mind every winter. Everyone does.

This is a large university with something like 60,000 students and the cleaning staff works in rotating shifts with “nights” going from 10 p.m. to 6 a.m. If you want to become a full-time cleaner, you have to work the night shift, which is like being dead socially and mentally. There are people who have worked that shift for decades now, which seems so strange to me because it’s such a mindless job and they’re all intellectually engaged and curious people. Most of us are. Working tends to grind it out of you and reduce your life to basic routines that a child could follow. Everyone keeps their pattern every day. They are both invisible and central to the functioning of the university. I have resigned myself to never having or desiring a full time job at this place.

This is not why they’re likely sabotaging the equipment though. The cleaning staff is upset about their new contract with the university. A few of them have already quit and others are calling in sick more often than they come to work. Our annual staff meeting turned into a screaming match with cleaners yelling at university middle managers that they should be ashamed of themselves and to stop dancing around the questions and one of them bizarrely doing a soft-shoe shuffle in a misguided attempt at levity. They also tried giving out “worker of the year” awards to boost morale and found that none of the winners came to the ceremony to claim them. To fully gauge worker satisfaction, cleaners were finally given a survey asking how strongly they agreed with statements like “The University really values me” and “I feel a strong commitment to the broader community and society in general.” When a supervisor said the goal was to create a more positive workplace, one long-time worker stood up and yelled, “We don’t have a workplace!”

The issue with the contract, quite simply, is it will end in 2018. At this point, the university will be free to hire whoever they want to do the work. Like so many other industries, the university is trying to do away with the old idea of ongoing employment. Previously, cleaners were hired on a continual basis and thus, if they lasted, had benefits, sick days, pensions, and someone could spend their whole working life doing something like this. Can you imagine? The work appealed, therefore, to immigrants, mostly from Eastern Europe, who couldn’t get anything better with their limited English, but could still make a life for themselves. Sensing an unnecessary expense, the university fought a yearlong battle with our union to do away with the old cleaners and have the right to replace them (and the union with them) with contractual positions.While everyone is saying optimistic things, it is clear that the university won in binding arbitration and most of the cleaners believe that in three years time, they will be fired, locked out, and replaced with whatever company bids the lowest. I have been told that, if we work hard enough until then, we could be recommended to be rehired by that contracted company and work the same job, part-time, for minimum wage. The old-timers are understandably glum.

For a university, going to a contractual model saves money, while also removing the cost of the cleaning staff from the public eye. In Canada, by a strange rule, universities have to make their operating budget public but not their capital budget (although a few do). For the most part, an operating budget covers day-to-day spending for a year, while a capital budget covers large holdings and large “brick and mortar” projects and ideally covers a larger time-frame. If the university is no longer paying the salaries of cleaners directly, instead they can pay a lump sum to a cleaning company out of the capital budget, which their board will see, but their public will not. In other words, to the public, it will just look like they have no cleaning budget and they can claim major savings, even if their capital spending projects put them into debt.

Such is the case now. The university spent something like half a billion dollars last year in total, but went into debt only on their capital budget by sinking hundreds of millions of dollars into building programs that they hope will turn the university from a liberal arts institution into a “world class” med school. About half of this money came from tuition hikes and half from government funds. The balance is often worse in the US, but in both countries public funds have shrunk at the same time as administrators have tried to respond by, as Stanley Fish explains, embracing neoliberalism, or as it’s often called, “running the university like a business”. At the same time as they replace staff with contracted temps and faculty with what Fish memorably calls a “transient and disposable workforce” of short-term adjuncts, they hike up tuition rates and build like mad in order to “compete” in the “free market”. They’re desperate to get more money in and, as a result, universities across North America are also driving down admissions standards and bringing in as many foreign students, who pay far higher rates, as they can. Internally, they call the students “basic income units”, or BIUs, and the BIUs are feeling the pinch as universities become more and more expensive and simultaneously harder to run under this model. “Running a university like a business” also requires, for some strange reason, creating a bloated and top heavy, well-renumerated, administrative structure to implement this yield-driven “free market” model that fits a university like a slot machine in a church.

It’s not just universities, of course, that are moving from hiring regular employees to relying on contracted, short-term workers. There is a major shift going on in many industries. One of the key innovations of capitalism in the first place was the creation of a labor market in which workers sold their labor by the hour, instead of owning tools and selling finished goods in the market. Now, the push seems to be in the direction of a model in which  labor, physical or intellectual, can only be sold on a temporary, short-term contractual basis. This could not only change the nature of what it is to work, but how it is that we relate to all of the institutions of our society. How strong should that “commitment to our broader community and society in general” be among workers who are de facto defined as “transient” and “disposable” by their employers? What will be the social glue as employment, housing, and even relationships become increasingly fluid?

None of that gets at what it’s like to work one of these jobs for years or decades and be told it will likely end in three years though. Some of my co-workers are angry, some are grateful for those three years of lead time on finding a new job, some have simply gone A.W.O.L., and all of us are wondering where our days are leading. One or two might be saboteurs.

I have ambivalent feelings about the saboteurs. They repulse me, but I find it hard to sympathize with their ostensible victims. I work at this job because it allows me to pay my bills and still maintain a vestigial connection to university life after finding that the PhD I earned was worth less than the paper it was printed on. The dream of cultivating a higher inner self through culture remains strong in me, along with a Matthew Arnoldian sort of loathing for disorder and anarchy. Most of us want to be embedded in our society, to have a place, to sublimate those violent inner urges in something whole and coherent. The university once offered a series of guideposts to a higher life, if at all possible. But if Arnold’s “Philistines” remake the university into an instrument for replicating themselves, where does that place culture? What about scholars? Or students? Or the saboteurs? If social institutions are to be subjected to the “creative destruction” of market capitalism, who are the real saboteurs anyway?

As I stand out on the quad one morning at 5:45 a.m. and watch a constellation of white flecks of snow softly settling downwards, I wonder what will be broken today and what life will be like in the future as more and more people feel themselves less and less connected to the institutions of their society. Peaceful I hope. But it won’t be boring.