Carly Fiorina's deranged 2016 strategy: I am a woman, but not that woman 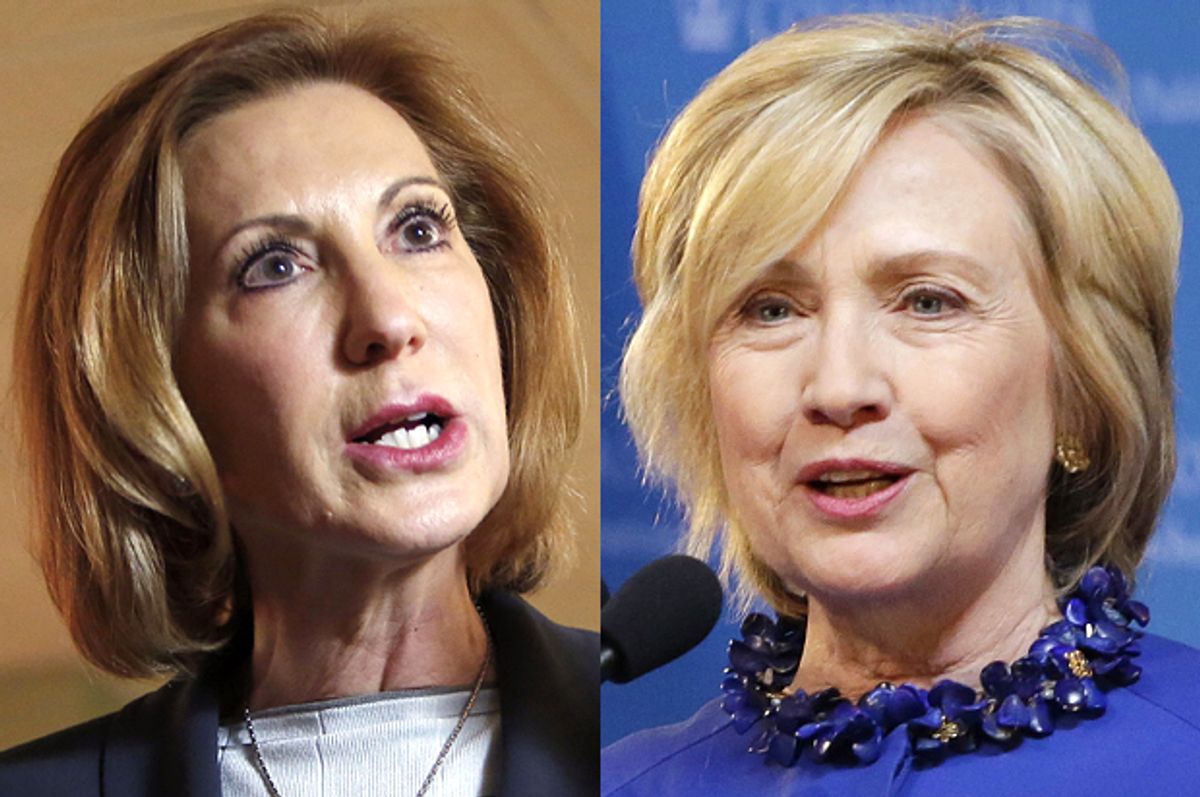 Carly Fiorina made it official on Monday, announcing her presidential candidacy on “Good Morning America” and releasing a campaign ad that opens with -- wait for it -- Hillary Clinton’s announcement video. Now why would Fiorina want the first face voters see in the ad to be another candidate's? I have a guess!

Fiorina’s beef with Clinton isn’t unique in a field of contenders that delight equally in getting knocks in on the Democrat. But the former Hewlett-Packard CEO has spent much of the last year pitching herself as the perfect Clinton foil, the only Republican with a gender card of her own to play.

It’s a complicated line to walk, to rely so heavily on “identity politics” while claiming to loathe them. (Fiorina, verbatim, in her announcement video: “It’s time to declare the end of identity politics!”) She will also have her work cut out for her when she has to square her opposition to raising the minimum wage, equal pay legislation and abortion rights with the idea that she is a candidate women should feel excited about, but it will be interesting to watch her try.

The official message of Fiorina’s announcement is that she is a business leader who understands “how the economy actually works,” but her time at the helm of Hewlett-Packard was marked by massive layoffs and job outsourcing that devastated employees and bruised her reputation as a CEO. (Despite her record, she left the company with $21 million in severance.) She also has no experience in elected office to speak of, though there was that one wacky, ineffective 2010 campaign against California Sen. Barbara Boxer. (Demon sheep!)

But there is nothing unusual about candidates running despite the fact that they don’t stand a shit's chance in hell of winning. Delusional candidates are pretty much a dime a dozen in the current Republican field. Ben Carson, who thinks that being gay is the same thing as being a sexual predator, also announced Monday. Mike Huckabee, who is Mike Huckabee, plans to do the same on Tuesday. Chris Christie, Bobby Jindal and Rick Perry are still kicking around, too.

We are definitely having a “Too Many Cooks” moment with the GOP primary race, but Fiorina's gender does set her apart. So does her willingness to go hard at Clinton without fearing any of the “war on women” blowback that may hinder the men in the race. (Not that being called sexist has really stopped many Republican men from being totally sexist.)

She knows it, too. Which is why Clinton looms so large -- because Fiorina wants to campaign as the anti-Hillary.

“And so what [Clinton] will have to run on is her track record, her accomplishments, her candor and trustworthiness and her policies,” she continued. “And I think that’s what elections should be run on — not identity politics, not what you look like, but who you are, and what you believe, and what you’ve done, and what you will do.”

Fiorina’s strategy is a parody of identity politics. It may make for an entertaining campaign (if you are the type of person to treat politics like sports, which is to say the worst kind of person), but it won't broaden the GOP's appeal beyond the white women voters who already lean conservative or do much to strengthen Fiorina's candidacy.

The “war on women” messaging favored by Democrats might be clumsy and losing its political bite, but the core of it reflects something meaningful -- that there are policies and priorities that disproportionately harm women. Not because “women voters” are a singular bloc, but because of the political and cultural realities that shape how women live their lives.

Republicans have for a long time tried to push back against the “war on women” label by insisting that women care about more than reproductive rights. The funny thing is, they're right. Women care about a whole lot more. But the GOP has failed to absorb its own advice, and has gone after women’s paychecks, women’s health care and women’s ability to feed and clothe their families with the same veracity used to decimate access to abortion care.

Nearly 70 percent of minimum wage workers are women, so when a candidate opposes a raise to the minimum wage, as Fiorina does, it is a referendum on women’s earnings. Women continue to earn less than their male peers -- an average of 78 cents on the dollar, but the disparities are far worse for black and Latina women -- so opposing legislation to address the wage gap, as Fiorina does, is taking a stand against institutional wage theft that costs women thousands in earnings over their lifetimes. The same points can be made about health care, reproductive rights, universal preschool, paid family and sick leave and a whole host of policies that Fiorina, like the rest of her party, has little to say about.