"Mad Men" recap: "Advertising is not a very comfortable place for everyone" 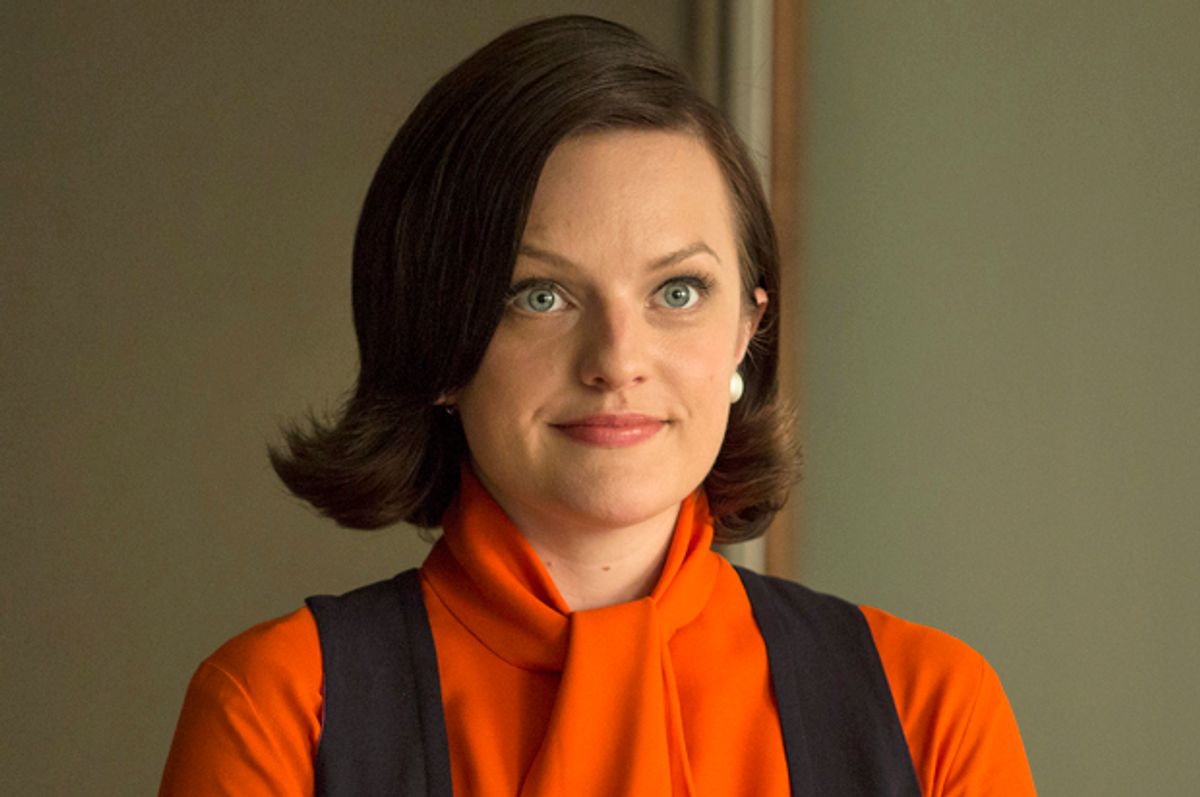 This was a fist-pumping, couch-yelling, joyous-whooping episode of “Mad Men”—or at least it was from halfway through on toward the end. After a parade of indignities for both Peggy and Joan—indignities that deliberately recall the struggle they both endured to carve out a place for themselves at Sterling Cooper & Partners—the back half of the episode is all spice and glory, a little bit of justice, a little bit of not-giving-a-fuck. It boils down to two moments: Joan in Jim Hobart’s (H. Richard Greene) office, reading him the riot act, and Peggy, hung over with a cigarette askew in her mouth, coming into her first day of work at McCann. Both scenes ring out like clarion bells, rising out of the discordant jangle of the episode.

Blending in is a “Mad Men” major theme this week. The show is always fixated on style and set pieces and production design—just last week I wrote about its use of symmetry. This week it’s about fading into the herd or standing out of the crowd. The faders-in might not be happier, or any more self-actualized, but they certainly have an easier time of folding into the regular routine of McCann. That’s Pete Campbell, with his era-appropriate sideburns and his expansive bluster; that’s Ted Chaough, with his era-appropriate mustache and his casual enthusiasm for the roast beef boxed lunch. They’re all wearing crisp white shirts and tastefully dark suits and a few select accouterments; they are all identical.

If Don feels stifled by all this conformity, with his stubbornly 1960s ‘do and his lack of interest in taking off his suit jacket at work—if Roger Sterling feels swallowed up by this company, to the point that he’s refusing to even show up—then how on earth must Joan Harris feel, a redheaded former partner so unique in this crowd that she literally looks like an exotic transplanted orchid? She couldn’t blend in if she tried—so she doesn’t try, thank goodness. But the result is that she is made a target of mockery and insult. Dennis, the disgusting cretin who told her she should be selling bras a few episodes ago, returns to mangle her relationship with Avon. Then his boss Ferguson Donnelly (Paul Johansson) offers to “handle” Dennis by offering to handle, a bit too intimately, Joan herself. And when she goes to Hobart himself, he makes it abundantly clear to her that he is not interested in making her feel welcome or necessary; she isn’t, because she doesn’t belong.

Joan’s argument with Hobart is a thing of real beauty—where the woman who embodied normative gender roles way back in 1960 channels the incredible rage and bitterness and frustration of her proscribed, crappy lot in life. The argument is an act of desperation—a confrontation unlike Joan’s usual strategy of sideways maneuvering. She is backed into a corner, so she plays the only card left to her—a card she never would have played at any time before this one—the gender card, one that only is available to her because of the enormous shifts in thinking over the last decade. She invokes Betty Friedan, who published “The Feminine Mystique” in 1963, and the Equal Employment Opportunity Commission, which took its charter from Title VII of the Civil Rights Act of 1964. Joan Holloway of 1960 has become Joan Harris of 1970, which has required a lot of internal change. But Joan Harris has much, much more at her disposal than her former self did. Hobart isn’t completely cowed, but he’s forced to reckon with her, and that is making the mountain come to her, instead of the other way around.

Indeed, to return to the theme of blending in, a lot of this episode offers, not too subtly, the conclusion that blending in is a privilege. It’s the story of Don’s entire life—one that he both rejects in the McCann conference room and then re-embraces for confronting the new Mrs. Bauer in Racine, Wisconsin. He has spent his whole life fighting for the ability to be a man in a suit like all the other ones, and he can still use that learned slickness to his advantage. But he can’t quite stomach it anymore, though why, I’m not quite sure. Roger Sterling will always blend in—he can’t help it—but he takes one last night to revel in being more than just another suit, saying goodbye to a dream that has died while playing an organ while his former copy chief roller skates around the empty office.

Peggy’s journey in this episode engages the most with the conundrum of fitting in—playing by the rules, really—versus the necessity of standing out, especially when you have as much ambition and talent as she does. Her original first-day outfit for McCann is a sherbet-green skirt-suit, an almost blinding color. It’s a little bit soft, but it stands out; on her, it feels a little childish, a little dated, and certainly trying too hard. And it ultimately ends up being hidden in her closet for a few weeks more—McCann thought she was a secretary (how charming), so the office has to rearrange for a few days and can’t put her up yet. Peggy spends those days working out of the empty and increasingly nonfunctional SC&P offices, wandering a ghost town and contemplating her life. She came into the company as a ponytailed, innocent secretary, and is walking out a career woman; it’s an experience that has left scars as well as markers of pride. Peggy has never looked completely comfortable in her clothing, completely at home in her own skin—her hair as always seemed trying too hard, molded into the helmet hair of the ‘60s, and the colors and prints of the last decade have made her look matronly well before her time. She was always trying to blend in, on some level, to look a part of the scenery, to not stand out too much.

I don’t really know what to make of tentacle porn making an appearance in “Lost Horizon,” or in Roger’s sudden affinity for Peggy beyond how wonderful it plays out on-screen, but the upshot is that Peggy gets what is maybe the best advice of her life: You don’t have to make the men around you comfortable in order to succeed. She’s drunk on vermouth at 4 p.m. on a Thursday, yes, but some lessons really stick. Her final moment in this episode is in an extremely chic, muted-but-interesting dress, with hangover sunglasses perched on her nose and an unlit cigarette sticking out of her mouth. Her box of work stuff is in front of her, but it’s not a shield or a weapon, it’s a part of her. And on her left, she’s got a 150-year-old print of a woman getting oral sex from an octopus—a woman completely fulfilled without a man!—and the men around her are visibly awed, as is, to be honest, the entire viewing audience. This is Peggy Olson, and she is not hiding anymore.

I’m not sure if “Lost Horizon” is good—but I’m not sure if it’s bad, either. It’s kind of necessarily plotty, focusing on the repercussions of the McCann Erickson absorption for all of our main characters. Some, like Pete, Ted and odious little Harry Crane, are happy; others, like Joan, Peggy, Don and Roger, have been brought pretty low. The happy employees don’t take up too much of our time this week—we see them fixed in the places they will be for the next several years, and it makes sense. Pete Campbell is now a vice president, while Ted is one of a dozen creative directors meeting with Miller about a newfangled invention called diet beer. Neither of them is what we’d called self-actualized, but they’ve shown up to their new lives, and they fit right into the scenery at McCann.

Don has taken a different route—literally. He drives several hours to Wisconsin on a lark; he talks to the ghost of Bert Cooper; he is unable to find Diana Bauer, who apparently has broken the hearts of many other men before Don. He is an empty suit finding that the suit does not fit him right anymore. Shirley tells Roger that advertising isn’t something everyone is comfortable with. Don is the poster child of that right now—both finding ways to make the suit work and finding ways to discard it. He tests the windows of his glass cage, echoing the title sequence of the show; he stares out the window at a wheeling plane, referencing one of the show’s most fascinating conspiracy theories, which posits that Don is the man who will become hijacker D.B. Cooper. He still looks like a consummate man of the ‘60s, and in “Lost Horizon,” he doesn’t know where he’s going. David Bowie’s “Space Oddity” closes out the episode, as he picks up a hitchhiker going to St. Paul. It’s not just out of Don’s way, it’s in the wrong direction entirely. “Now it’s time to leave the capsule / if you dare… And I’m floating / in a most peculiar way … and there’s nothing I can do.”