His comments on Jenner are baffling -- but also remarkably consistent 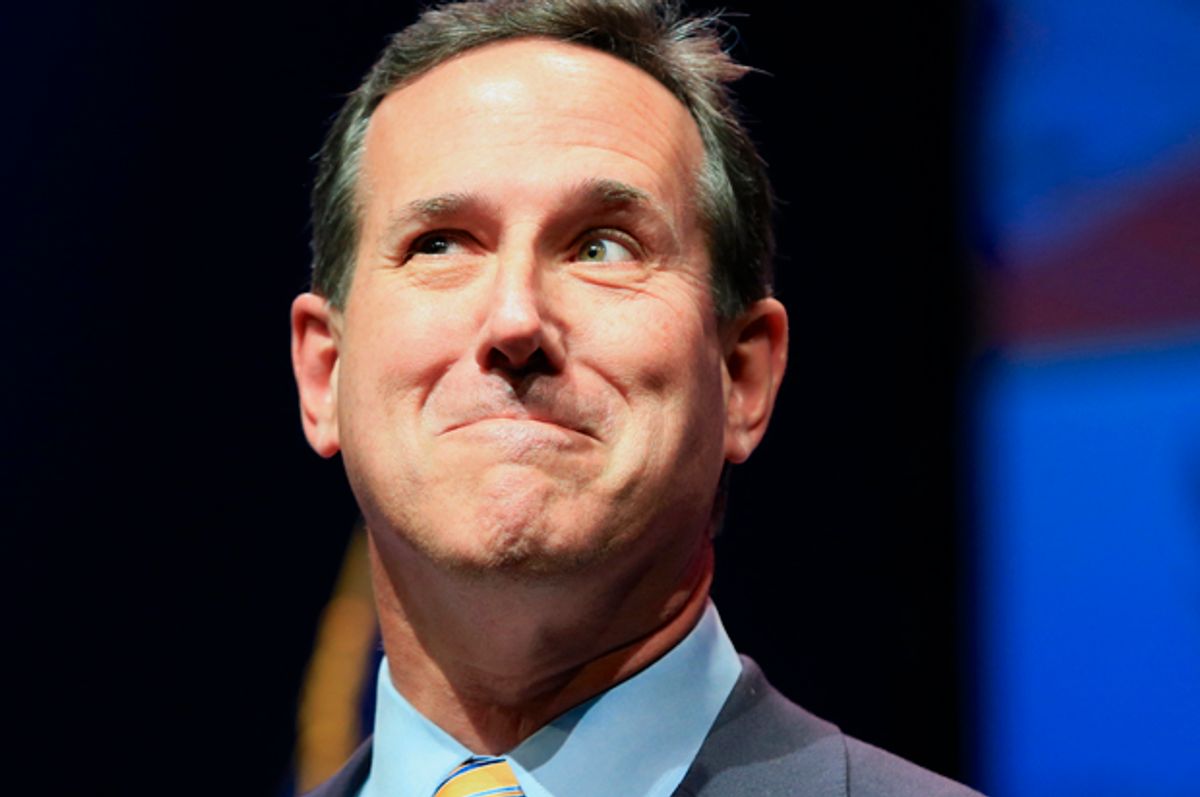 Rick Santorum says so many idiotic things, it would be futile to point it every time he puts his foot in it. But every now and then, the man who most assuredly will never be the president of the United States flubs it in a way that's exceptional, even for him. And when he attempted this weekend to show his support for Bruce Jenner, he did just that.

First, though, let's give the man some props. For a man whose track record on LGBT issues is so notoriously offensive it's spawned the greatest Google search term of all time, he's surprisingly nonchalant on Bruce Jenner's recent acknowledgment that "For all intents and purposes, I’m a woman." At a roundtable with reporters at the South Carolina Republican Party’s convention Saturday, Santorum told Buzzfeed News that "If he says he’s a woman, then he’s a woman. My responsibility as a human being is to love and accept everybody. Not to criticize people for who they are. I can criticize, and I do, for what people do, for their behavior. But as far as for who they are, you have to respect everybody, and these are obviously complex issues for businesses, for society, and I think we have to look at it in a way that is compassionate and respectful of everybody." (He did however dodge the issue of public restroom access for trans persons, saying, "I think those are things that the business community and local agencies and organizations should deal with.")

On Sunday, he elaborated on those sentiments on his Facebook page, saying, "Many of you may have read a story published by the website BuzzFeed where I was asked for my thoughts regarding Bruce Jenner. My comment affirmed Jenner as a person, made by God in His likeness as we all are. It was meant to express empathy not a change in public policy. #compassion" Well, hashtag compassion, good for you, buddy! But his expression of "empathy" seemed at first an odd choice for someone who just a few weeks ago, when asked if he would attend a same-sex wedding of a loved one replied that "I would not. As a person of my faith, that would be something that would be a violation of my faith. I would love them and support them, but I would not participate in that ceremony." Sure, because as he has said in the past, "In every society, the definition of marriage has not ever to my knowledge included homosexuality. That’s not to pick on homosexuality. It's not, you know, man on child, man on dog, or whatever the case may be." Exactly -- where does it end? One day you're going to a nuptial brunch for two women, and then next thing you know, you're saddled with a bunch of invitations to man-dog destination weddings.

Santorum's "love and accept" line is entirely consistent with his delightfully compartmentalized view of the world. He's a great fan of the "But I like gay people just fine — it's their sinful, disgusting behavior I want to legislate" school of thought. Four years ago, when Don Lemon asked if he had any gay friends, he quickly retorted, "Yes! In fact, I was with a gay friend of mine just two days ago…. They differ from me, but they know that I love them because they’re my friends." The same year, he asserted, "I do believe the family, integrity of the family is important for the future of our country. But that does not mean that, that I don’t like people or I hate people or that there’s something wrong." As he has maintained all along, "I have no problem with homosexuality. I have a problem with homosexual acts. We have laws in states, like the one at the Supreme Court right now, that has sodomy laws and they were there for a purpose. Because, again, I would argue, they undermine the basic tenets of our society and the family." According to Santorum, LGBT people are great, just great, as long as they don't long as they don't want to do things straight people do like get married or adopt children. You can be LGBT, just don't behave LGBT.

Here's the thing about trying to neatly make distinctions between empathy and public policy — public policy desperately requires empathy. It requires leaders who can be accountable to all the citizens they serve — not just the white, hetero, Christian male ones. Effective public policy takes into account the needs of the pregnant teenager and the recent immigrant and the 65 year-old father who's gender transitioning. Because you can't say "I love you and support you" and then stand back and not fight for that person's rights. Compassion is active. It champions equality. And anything less is as empty and meaningless as a Facebook post.