The golden parachute candidate: Corporate-jet conservative Carly Fiorina wants to be president, for some reason

Failed tech CEO Carly Fiorina boasts that she's not a professional politician, which is true: she's bad at politics 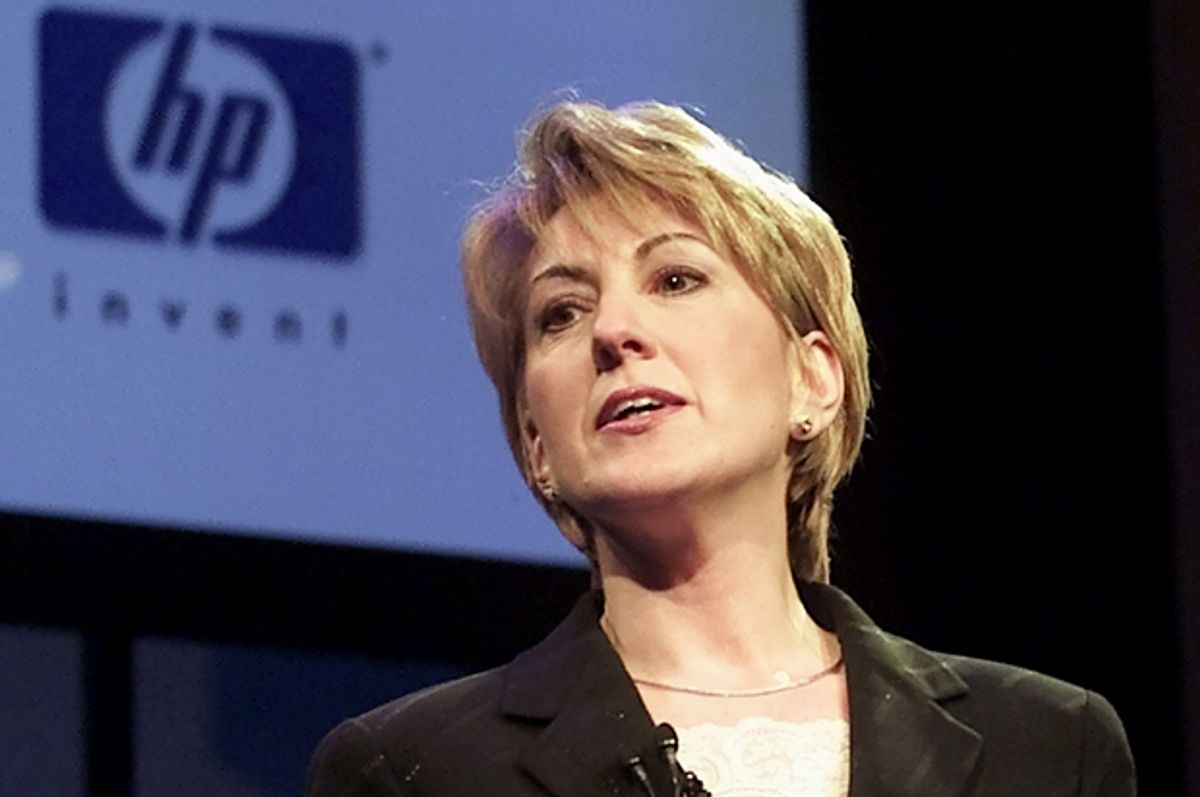 For reasons that remain unclear, Carly Fiorina is running for president. The former Hewlett-Packard CEO and failed Senate candidate has been teasing a potential run for months now, but this morning she made it official and launched her new official campaign website (which drew almost as much attention as her unofficial campaign website). If you peruse the official site in search of a coherent rationale for why we need a Fiorina presidency, you’ll be left sorely disappointed.

Fiorina’s argument for why she should be president seems to be that she’s not Hillary Clinton. She posted a short video that ostensibly explains why she’s running, and the first image you see is the back of Fiorina’s head as she watches Hillary’s announcement video. (Fiorina clicks off the Hillary video with the remote because SYMBOLISM.) From there she launches into an awkward monologue about how politicians shouldn’t run for political office because that’s not what the American Revolution was about. “Our founders never intended us to have a professional political class,” she says. So vote Fiorina, because that’s what the professional political class that founded the country would want.

But Fiorina’s not arguing for herself here; she’s arguing against “politicians.” And the only reason she can make this argument is that her one attempt at becoming part of the “professional political class” ended with a lopsided defeat in a year when other Republicans across the country surged to victory on an anti-Obama wave. This “I’m not a politician” schtick was the same message Fiorina deployed against “professional politician” Barbara Boxer in 2010, and she lost by 10 points. Carly Fiorina’s not a “politician,” but only because she’s bad at politics. Indeed, if she’s saying that America should flock to someone who’s untainted by politics, then why should they back Fiorina over, say, Ben Carson? He’s making the same “I’m not a politician” pitch, but unlike Fiorina, he doesn’t bear the taint of having previously run for office.

Anyway, for her 2016 run, Fiorina says she’ll put an end to “the sound bites, the vitriol, the pettiness, the egos, [and] the corruption,” which is amusing and also hypocritical. No more sound bites, vitriol, and pettiness sure sounds nice until you remember that much of Fiorina’s 2010 campaign was all about painting Barbara Boxer as an out-of-control egotist. They even produced an extremely weird “movie” that depicted Boxer’s “big head” as a grotesque floating blimp that traveled the country inflicting “sound bites” on the masses. No pettiness or vitriol there! After all, Fiorina’s not a politician.

As for ending “corruption,” well, who could be against that? Under the Fiorina regime, there will be no more hand-outs for the privileged and no more payouts for people who don’t do the job that’s expected of them. On a related note, Carly Fiorina received $21 million (plus $19 million in stock options) for being fired as CEO of Hewlett-Packard in 2005.

Speaking of that Hewlett-Packard experience, running on her tenure as CEO did her little good in 2010, mainly because everyone kept pointing out how many jobs were lost under reign (some 30,000 layoffs) and all the enthusiastic outsourcing she presided over. But she’s going back to the same well for 2016 and offering a highly sanitized retelling of her stewardship of the company. “Carly didn’t always make the most popular decisions at HP,” her website boasts, “but, time and time again, they would prove to be the right ones.” And there’s even a little backbiting at the Hewlett-Packard board for forcing her out:

But even though her record as CEO speaks for itself, Carly faced headwinds from people who did not want to see HP change. They wanted to double-down on a flawed agenda that simply wasn't sustainable against the new challenges of the 21st Century.

Yes, you can certainly tell that Carly Fiorina hates sound bites and isn’t a “professional politician” – only real, authentic people use phrases like “double-down on a flawed agenda” and “new challenges of the 21st Century [capitalized for some reason].” Fiorina’s list of accomplishments as HP CEO include “doubled revenues” and the fact that they were cranking out “11 patents a day.” She’s clearly hoping that people will confuse “good for a giant tech company’s bottom line” with “good for America.”

So at this moment, there is no real justification for why Carly Fiorina is running for president. At the very least, though, she’s carving out a unique space for herself. While other candidates are scrambling to show off their populist cred and fake concern over income inequality, Fiorina is embracing her legacy as a failed tech CEO gliding along on a golden parachute.