Neil Gaiman stands up for Charlie Hebdo: "For f**k's sake, they drew somebody and they shot them, and you don't get to do that"

Gaiman, Art Spiegelman and Alison Bechdel on why comics are so controversial — and why they must be defended 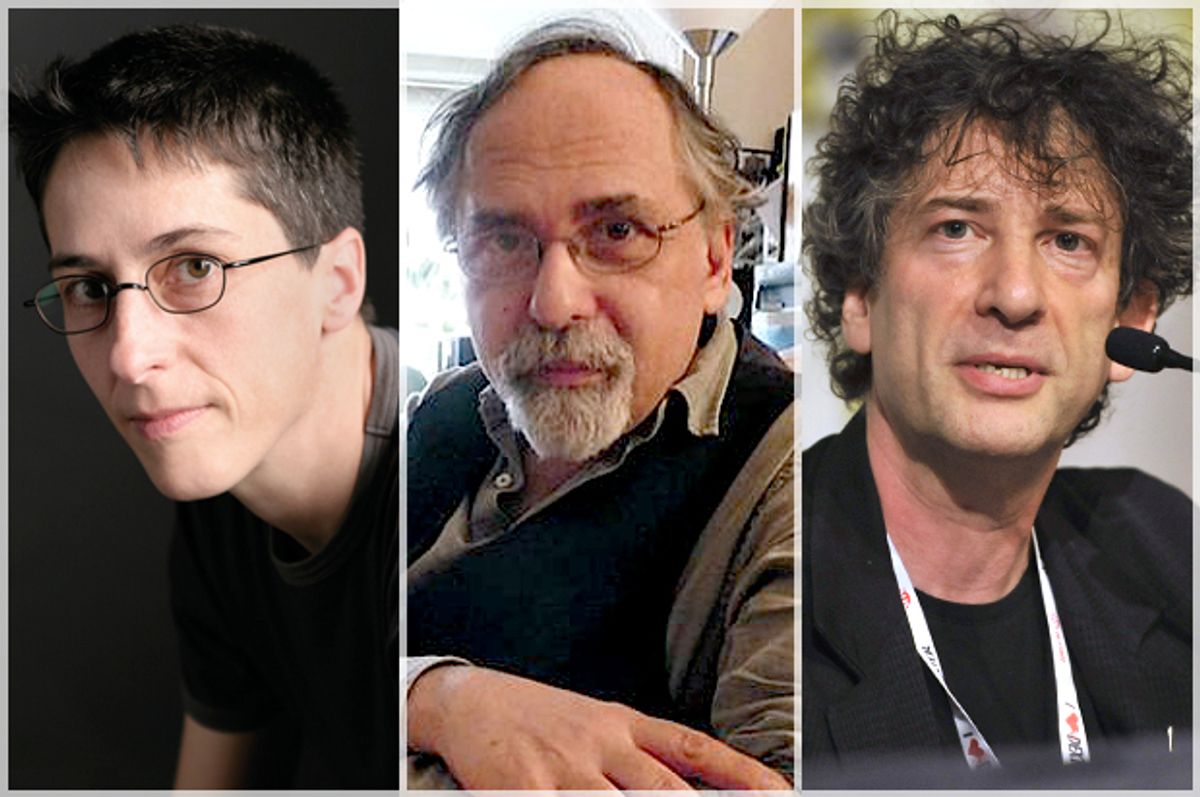 When six writers withdrew in protest from PEN American Center's annual fundraising gala last week, they set off a long and lively discussion of free expression and its limits. At issue is the Toni and James C. Goodale Freedom of Expression Courage Award that PEN is tonight bestowing on the French satirical magazine Charlie Hebdo, eight of whose staff members were killed, along with four other people, when gunmen sent by the militant Islamist group al-Qaida in Yemen assaulted their offices earlier this year. The dissenting six were soon joined by more than 200 other PEN members, who signed a letter objecting to "enthusiastically rewarding" the magazine because they consider its cartoons of the prophet Mohammed to be offensive to Muslims.

But those six writers also left six empty chairs at the event, chairs ordinarily occupied by well-known literary figures who serve as "table hosts." Over the weekend, six other writers stepped forward to fill those seats. They include journalist George Packer, "Reading Lolita in Tehran" author Azar Mafisi and Alain Mabanckou, a Congolese-born French author who will present the award to Charlie Hebdo's editor-in-chief.

The other three are all celebrated comics artists: Art Spiegelman, Neil Gaiman and Alison Bechdel. Spiegelman, author of the legendary graphic novel "Maus," had read that some PEN members had floated the idea of standing up and turning their backs when the award was presented, or hissing. "I thought, that's obscene," he said on the telephone yesterday. "I talked to a few friends, and Alison and Neil Gaiman were able and willing to come. Matt Groening [creator of "The Simpsons"] tried to come but he was in production this week. I thought it would be great to have someone to shout out, 'Cartoonists' lives matter!' when the award is being given if anybody dared hiss it."

Cartoonists tend to stick together because they have to; as Gaiman points out, their work is disproportionately singled out for suppression both abroad and in the U.S., while at the same time often regarded as not "serious" enough to deserve a full-throttle defense. "I spent 12 years on the board of the Comic Book Legal Defense Fund," Gaiman told me, "for which I was fighting on a daily basis to keep people who had written, drawn, published, sold or owned comics out of prison and from losing their livelihood for having drawn something that upset somebody."

Cartoonists are particularly vulnerable when addressing Islam, as some (but not all) Muslims believe that it is sacrilegious to depict their prophet visually in any way. This is not a threat limited to Europe. Earlier this year, CNN reported that the Seattle cartoonist Molly Norris is still in hiding, four years after she attracted death threats for drawing non-satirical images of Mohammed on a teacup and thimble and domino. Her name recently appeared on the most-wanted list of the al-Qaida magazine Inspire.

In the case of Charlie Hebdo, it was the magazine's cartoons that drew the ire of the murderers and its cartoons that the dissenting PEN members find unacceptable. The impact of the images in cartoons can be instant and visceral, for better and for worse. "Cartoons have an immediacy that prose can't have," Spiegelman said. "The problem is cartooning is as much a literary form as it is a visual form, and it requires a great degree of sophistication to grapple with it. It builds on symbols, metaphor, irony, and one has to have a fair amount of cultural context to know what you're looking at. It's easy therefore to misread and misunderstand, and I found that some of my cohorts and brethren in PEN are really good misreaders."

Cartoons and comics are a symbiosis of images and text, and sometimes viewers don't -- or, because of language and cultural barriers, can't -- absorb the meaning of the words before reacting to the images. "It's really, really easy in comics for one image to be taken out of context," Gaiman said. This has happened, he says, in every court case he's been involved with. In one CBLDF case, he recalled, everything boiled down to a single drawing of the artist Picasso, depicted walking around his studio naked, as was the painter's wont. "There was an argument over whether this tiny Picasso penis was erect or just flapping up as he walked. You're laughing, but we had to raise hundreds of thousands of dollars in legal fees for this. It was fucking nuts."

Bechdel, author of "Fun Home," in posting about her decision to host a table at the PEN gala on her blog, writes, "satire is a powerful weapon, but it’s also extremely culturally specific, and often doesn’t work when it’s the slightest bit out of context." Like many, she refers readers to the website Understanding Charlie Hebdo for explications of the cartoons in their cultural context. Often they are shown to have meanings the opposite of what has been assumed by Anglophones.

All three cartoonist have admitted that Charlie Hebdo's cartoons are mostly not to their own taste. "Things can get pretty crude and sophomoric," Bechdel writes. "It’s not my kind of humor." Spiegelman acknowledges that, while "not the greatest thing since Chris Ware," the magazine has been the work of cartoonists who often "wield their power intelligently. They know how to boil things down to that essence."

Taste and prestige do appear to be a tacit element in the repudiation of Charlie Hebdo. The writer Luc Sante, who signed the letter to PEN, likened the weekly to Cracked, an American humor magazine, as equally unworthy of recognition for reasons apart from its politics.

Spiegelman reported that his wife, Françoise Mouly, the French-born art editor of the New Yorker, regards the campaign against the award as a form of snobbery. "She said, 'Now I get it: PEN is a union, a literary guild, and they want to keep the barbarians out.'" As Gaiman put it, "Cartoonists, and especially cartoonists outside of whatever world you grew up -- we're in the gutter. And that's fine." Similar cases, he points, might have been made against other PEN-award recipients who work in other forms. "It's that thing where people look at it and say, 'I could draw that. It's not real art, is it?'"

Cartooning has also sometimes served as a tool for genuine hate groups, such as Pamela Geller's American Freedom Defense Initiative, which is dedicated to driving Muslims out of the West and fighting the wholly imaginary "Islamization" of America. The group organized an exhibition of drawings of Mohammed in Garland, Texas, that was attacked by two gunmen on Sunday night.

"That organization is vile," Spiegelman said. "I wouldn't give them an award, but I'm sure someone at the dinner will say, 'See your friends in Texas are the same as your friends at this magazine.' To me, they're the antimatter. They're the opposite of Charlie Hebdo. Because this is not a matter of discerning quality. It is a matter of discerning ethics and intelligence."

Gaiman takes a slightly different position. His years working for the Comic Book Legal Defense Fund have made him an absolutist about the need to actively defend offensive speech because "an amazing number of things will upset people." Although he has been researching Charlie Hebdo since agreeing to act as a host at the gala, "I don't know that I would have said 'yes' any less enthusiastically if Charlie Hebdo really were this straw man publication described by some of the people who write to me online, a publication that does nothing but anti-Islamic cartoons. From what I've read, that does not seem to be the case. But for fuck's sake, they drew somebody, and they [al-Qaida] shot them, and you don't get to do that."

Bechdel seems to be the most troubled by the complaints against Charlie Hebdo, although she does categorically reject comparisons between the magazine and Geller's group as "a very different enterprise." However, "just because I wouldn’t do [Charlie Hebdo's] kind of cartoon doesn’t mean I want to live in a world where no one is allowed to. Making space for this type of expression seems vital."

For Gaiman, the content is beside the point. "The work is not to my taste and it's not a magazine that I read. But as far as I can see, this is not an award for quality. This an award for courage and turning up after your offices have been firebombed. Turning up after 12 people in your office have been murdered. Just turning up, putting out the next issue: The amount of courage in that is something that I find incomprehensible."