Richard Cohen, unmitigated racist: Why the Washington Post hack is pining for Nixon 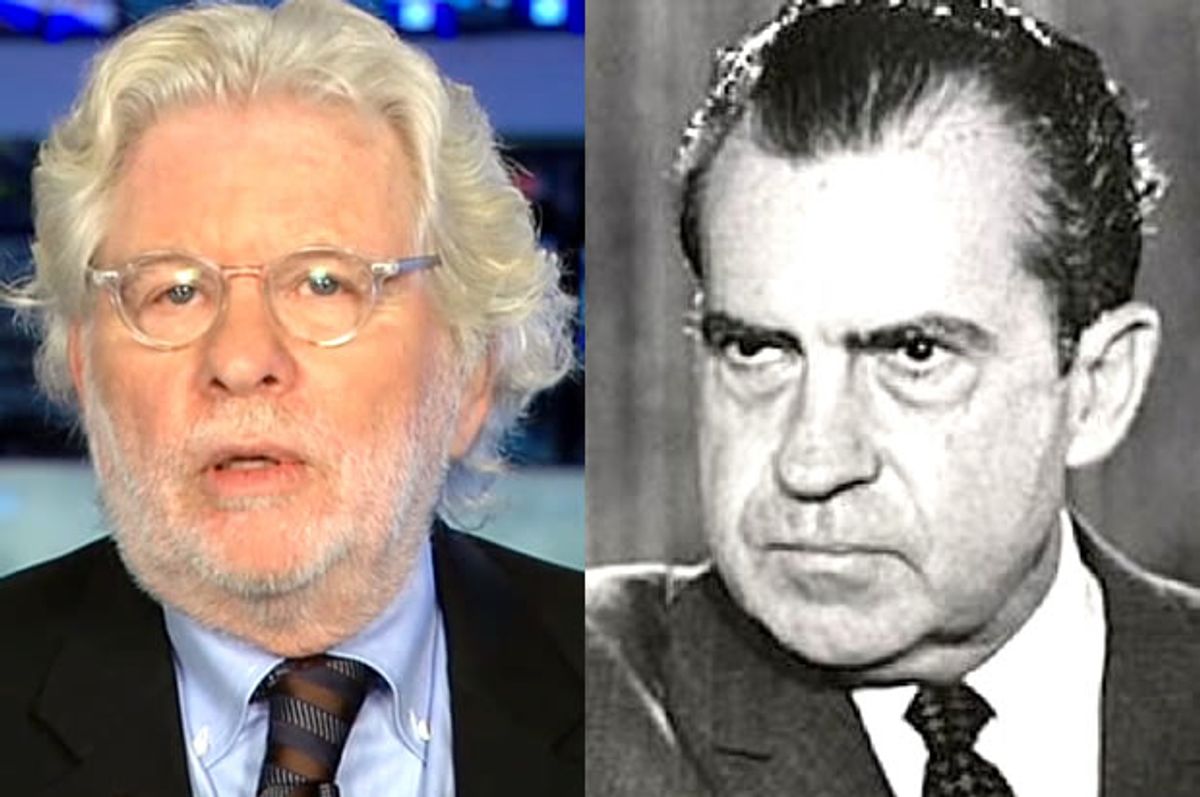 Richard Cohen — the inexplicably still-employed centrist hack that the neoconservative editorial board of the Washington Post masquerades as a liberal — should never, ever write about the intersection of politics and race in America.

He’s proven this many, many times throughout his more than three decades as a nationally syndicated columnist. He even once wrote a column racist enough that it led to Ben Bradlee, his late boss, offering a public apology — and this was in 1986, not exactly the high-water-mark of white sensitivity to issues of race. But as he’s grown older, and the cultural norms around race have changed, it has become evermore difficult to ignore his complete inability to write anything worthwhile about his home country’s most important social fissure.

For example, did you know that chattel slavery — the systematic, rapacious and inescapably violent attempt to transform human beings into raw and easily exploited economic material — was a horrific crime? If you did, good for you; because until he saw “12 Years a Slave,” Cohen sure didn’t! And did you know that those of us with “conventional views” find it difficult not to “repress a gag reflex” when thinking about interracial marriage? If you didn’t, pity for you; because Cohen sure did!

The list of Cohen’s racial hot takes goes on. It was a shame that George Zimmerman had to go and kill Trayvon Martin, he granted — but black people are scary! And politicians who refuse to own up to this are just a bunch of jerks involved in an “Orwellian exercise in political correctness.” Speaking of political correctness, Cohen once argued that Barack Obama’s election to the presidency proved affirmative action was no longer necessary; “a glance at the White House,” he wrote, “strongly suggest[ed] that things have changed.” Race was now “irrelevant” (unless, of course, you were a young man in a hoodie, walking home with some candy, and you happened to be black).

Yet despite this clear record of journalistic atrocity, and his obvious pattern of adding a thin patina of intellectualism overtop what is essentially lizard-brained fear, Cohen keeps churning out the race-take hits. So imagine my trepidation when I saw that his latest was a response to former Secretary of State Hillary Clinton’s (surprisingly good) speech on criminal justice. And imagine my surprise when, after I finished reading it, I determined it was a confused, lazy and — you guessed it! — racist mess. I was about as shocked as I am whenever I hear an old white guy having second thoughts about Richard “Southern strategy” Nixon.

But before you chide me for implying Cohen’s guilt with such an unwelcome association, especially with regard to racial politics, know this: I’m not the one who wanted to throw Nixon into the debate on mass incarceration — Cohen is! According to him, you see, Clinton’s speech got him thinking about the 37th president. More specifically, he says the 2016 presidential frontrunner’s address reminded him of “Nixonland,” the magisterial book on American politics in the mid-to-late 1960s from Rick Perlstein. (Cohen is a fan of Perlstein’s work, evidently; but as Perlstein expressed on Facebook, the sentiment is not reciprocated.)

“Hillary Clinton, take note,” Cohen writes. It was the urban riots of the 1960s, he argues, that sunk the Great Society and made Nixon president. Not the passage of two civil rights bills that exploded the Democratic Party’s North-South coalition, but the riots. It all started with Watts in 1965, Cohen writes, which “transfixed and horrified the nation.” Cohen doesn’t note the cause of those riots — police brutality, just like in Ferguson and Baltimore — but he does claim that, afterwards, “Richard Nixon, the champion of law and order, was on his way.” Cohen was no fan of Nixon’s at the time, mind you; but he says the riots of the era inspired in him “an inordinate respect for tear gas.”

Cohen’s not the first to see parallels to the disorder of the ‘60s and today, of course. They’re stark and apparent to all — even those with a grasp of history as weak, superficial and anecdotal as his. But while a lot of observers have seen the historical analog as a powerful rebuke to those who would argue, as Cohen once did, that the legacy of white supremacy is a thing of the past, Cohen instead sees something different. In his world, the turmoil that followed the murder of Martin Luther King didn’t expose the depth of systemic racism and the necessity of laws like the Fair Housing Act. Rather, those years just proved that politicians like Hillary Clinton should just do what Richard Nixon did.

That’s the clear takeaway from Cohen’s bizarre argument that New York City Mayor Bill de Blasio has recognized “law and order” as “the one issue that can keep him from a second term.” And it’s the most likely reason why he claims that Clinton’s speech, which was “right” on the merits, should not have been delivered while “stores were being looted in Baltimore” and “another New York cop … was shot.” If Clinton has the “intellectual honesty” to talk about “the high incidence of criminality among young black men” — which “is surely a factor” in the prison-industrial complex — Cohen says, that’s great. But she should only do so when things are quiet, maybe after his beloved tear gas has stepped in.

Be more like Nixon; such is the wisdom of Richard Cohen, in 2015, on the issues of inequality, mass incarceration, police brutality, and race. Needless to say, this is bad history, dumb politics and morally bankrupt analysis. But this is nothing new for Richard Cohen; he’s always been terrible. And that, apparently, is just fine with the overwhelmingly white sages on the editorial board of the Washington Post.