The right has long harbored fantasies about shadowy government conspiracies. Now that paranoia is bigger than ever 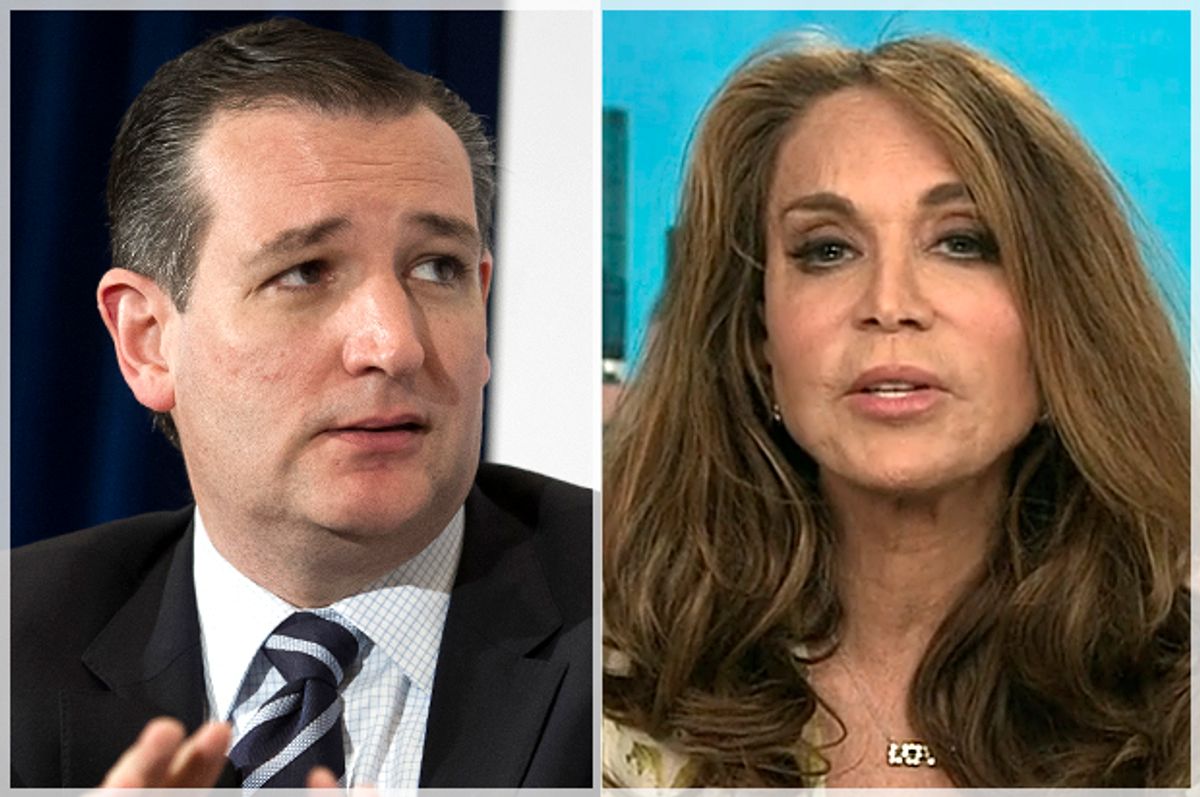 Pamela Geller's perennial crusade to offend American Muslims was the target of bloodshed last weekend, when two shooters attacked her puerile "art contest" in Garland, TX. A police officer was shot protecting her self-serving "cause," which is a price far too high for Geller's shenanigans, but this is America, we believe in free speech and Pamela Geller is entitled to abuse that freedom in whatever toxic way she chooses.

(And it goes without saying that violence against speech is always wrong and must be condemned. It is hereby condemned, without reservation.)

Geller's statement after the shootings was simple: "This is war --- the war is here." Which is perhaps the best articulation of the current mood on the right that we've seen in a while. Indeed, wing-nuts seem to believe they are simultaneously at war with the federal government of the United States (which just last week they claimed was planning to drop death squads into small rural Texas towns under cover of "military exercises"); with immigrants who are streaming across the border to destroy our way of life; and, of course, with the jihadis who are trying to kill decent Americans who are simply making fun of their religion. As you can see, the right is working itself into a hell of a lather; the "other" has not been this present in their paranoid imaginations for quite some time.

Take Congressman Peter King, who tied up recent events in a nice bow for the folks watching Fox News:

"When people like Hillary Clinton say that police should not have weapons of war, the fact is, we are at war; we are at war with Islamist terrorism, and we have to have all weapons and all resources available."

Bringing in Hillary Clinton, weak sister who won't keep the country safe from terrorists and God-knows-who-else, is very clever. King went on to say that we shouldn't even be talking about Geller, being provocative because "being in America means that you can be provocative. This is the First Amendment. We cannot sacrifice our Constitution to Islamists or politically correct commentators."

As you may recall, King held a more nuanced opinion about the people who objected to the building of a Muslim recreation center near Ground Zero:

What a thoughtful comment! Sure they had a right to build the mosque. But perhaps they should have taken people's feelings into account, where it concerns an issue about which they felt very personally sensitive. (How politically correct of him.) But that was then. This is now.

Peter King knows the GOP base very well. And recent polling bears out the fact that they are ready to rumble. The conventional wisdom holds that it's always "the economy, stupid," and a voter's main priority will forever be with his or her pocketbook. Perhaps this is true. But the two parties often break down their priorities in their own minds in very different ways:

When asked in the new NBC News/Wall Street Journal poll which issue should be the top priority for the federal government to address, Republican primary voters' leading response was national security and terrorism (27 percent said it was their first choice).

By comparison, the top priority for Democrats in the poll was job creation and economic growth (37 percent) — followed by health care (17 percent), climate change (15 percent) and national security and terrorism (13 percent).

The economy dropping to the No. 3 concern among Republican primary voters is a striking departure from March 2012, when it ranked No. 1 (at 36 percent) — followed by the deficit/government spending (at 35 percent) and national security/terrorism (at just 8 percent).

So what has changed since 2012, when the right was obsessed with economic issues? The economy has improved and deficits have shrunk, of course; but that hardly explains why Republicans would be happy about it while Democrats are still concerned. After all, Republicans are invariably hostile to the Obama administration, and will necessarily be running against the president's record on the economy, whether they like it or not.

No, it's not that they suddenly believe it's morning in America, again. It's that they have their old fear-mongering mojo back. And you can tell that they think it feels very, very good.

As for why they prioritize these issues so differently from Democrats: It's fair to say that they are living in a different media reality and literally see the world and its challenges from a radically different perspective. If you were to watch Fox News or listen to right wing talk radio so religiously, you too would believe that the nation were under siege from foreigners.

Where a moderate or liberal might think that the Middle East is heating up and that immigration presents a big challenge (and yes, worry a bit about some homegrown terrorist type deciding to try something violent) the right sees a full blown assault on America and everything it stands for. Where the moderate or liberal has grave concerns about the economic future of their children and wonder whether the middle class will continue to fall behind, the right believes Obamacare is a socialist plot to kill old people, and that it's perfectly possible the White House has ordered the military to put Texas under martial law. (They believe this for reasons that remain obscure, other than that the state is home to a lot of Republicans. But then so is the military, so it's hard to figure that one.)

They are, simply put, living in a different world.

But there's nothing new about this impetus for fear-based politics. Here's Senator Joseph McCarthy in 1951:

How can we account for our present situation unless we believe that men high in this government are concerting to deliver us to disaster? This must be the product of a great conspiracy on a scale so immense as to dwarf any previous such venture in the history of man. A conspiracy of infamy so black that, which it is finally exposed, its principals shall be forever deserving of the maledictions of all honest men. . . . What can be made of this unbroken series of decisions and acts contributing to the strategy of defeat? They cannot be attributed to incompetence. . . . The laws of probability would dictate that part of . . . [the] decisions would serve the country’s interest.

If you didn't know better, you'd think he was talking about the Iran negotiations. Or maybe Benghazi. I lifted that passage from Richard Hofstadter's famous essay from 1964, "Paranoid Style In American Politics." Hofstadter went back farther in American history than the 1950s, quoting from populists in the 1890s carrying on about secret conspiracies among the cosmopolitan elites, as well as Catholic and monarchist cabals from even earlier. It's been a feature of American political life from the beginning.

However, in the post-World War II era, the Republicans have organized themselves around a specific sort of free-floating anxiety about foreigners, government bureaucrats, liberal elites, racial minorities and immigrants, all ostensibly conspiring to destroy the traditional American way of life. Right-wingers see themselves as the lone crusaders protecting the legacy of what used to be known as the United States of America --- a country which existed mostly in their imaginations, and which was fueled by beautiful fantasies, created by a bunch of immigrants who settled in Hollywood and created an picture of America that never existed. These conspiracists are the heroes of their own stories, saving American babies from the interlopers who would steal their birthright.

There are a lot of people who make a lot of money selling that paranoid vision. As Rick Perlstein pointed out in an essay called "The Long Con," the early pioneers of of the wing-nut industry, who surveyed the market in the wake of Barry Goldwater's 1964 presidential defeat, understood their marks perfectly.

These are bedtime stories, meant for childlike minds. Or, more to the point, they are in the business of producing childlike minds. Conjuring up the most garishly insatiable monsters precisely in order to banish them from underneath the bed, they aim to put the target to sleep.

Dishonesty is demanded by the alarmist fundraising appeal because the real world doesn’t work anything like this. The distance from observable reality is rhetorically required; indeed, that you haven’t quite seen anything resembling any of this in your everyday life is a kind of evidence all by itself. It just goes to show how diabolical the enemy has become. He is unseen; but the redeemer, the hero who tells you the tale, can see the innermost details of the most baleful conspiracies. Trust him. Send him your money. Surrender your will—and the monster shall be banished for good.

After the debacle of the Iraq war and the financial meltdown, the Republican far right smartly "rebranded" themselves as the Tea Party, vaguely decrying "bail-outs" and setting up in total opposition to healthcare reform -- yet another one of those so-called assaults on our very way of life. This too was about fear, a very real fear of economic insecurity, couched as always in terms of a conspiracy to give benefits to undeserving moochers at the expense of hard working Real Americans.

But today, enough time has passed from the embarrassment of George W. Bush's abject failure for these people to turn back to their preferred mode of paranoia: fear of "the other." (For all their most valiant efforts, attempts to paint President Obama as that threat never quite made it out of the right wing fever swamps.)

So we are about to face an election in which the right is fully mobilizing around the fear of ISIS (with a little dash of anti-Christian fervor), immigrants pouring over the border, and Muslim terrorists in our communities. Coupled with our society's nervousness about electing the first woman president (which present a whole other dimension to the argument) the right sees another chance to ride the fear factor to victory. The contest for the presidential nomination will probably be decided on the basis of which of the possible daddy figures on offer tells them the most soothing story of their own bravery in the face of such existential danger. The problem is that not one of the announced candidates looks even slightly believable in that role.