A full plate of hate: Texas lawmakers literally can't clear all the anti-woman, anti-LGBT measures off their desks 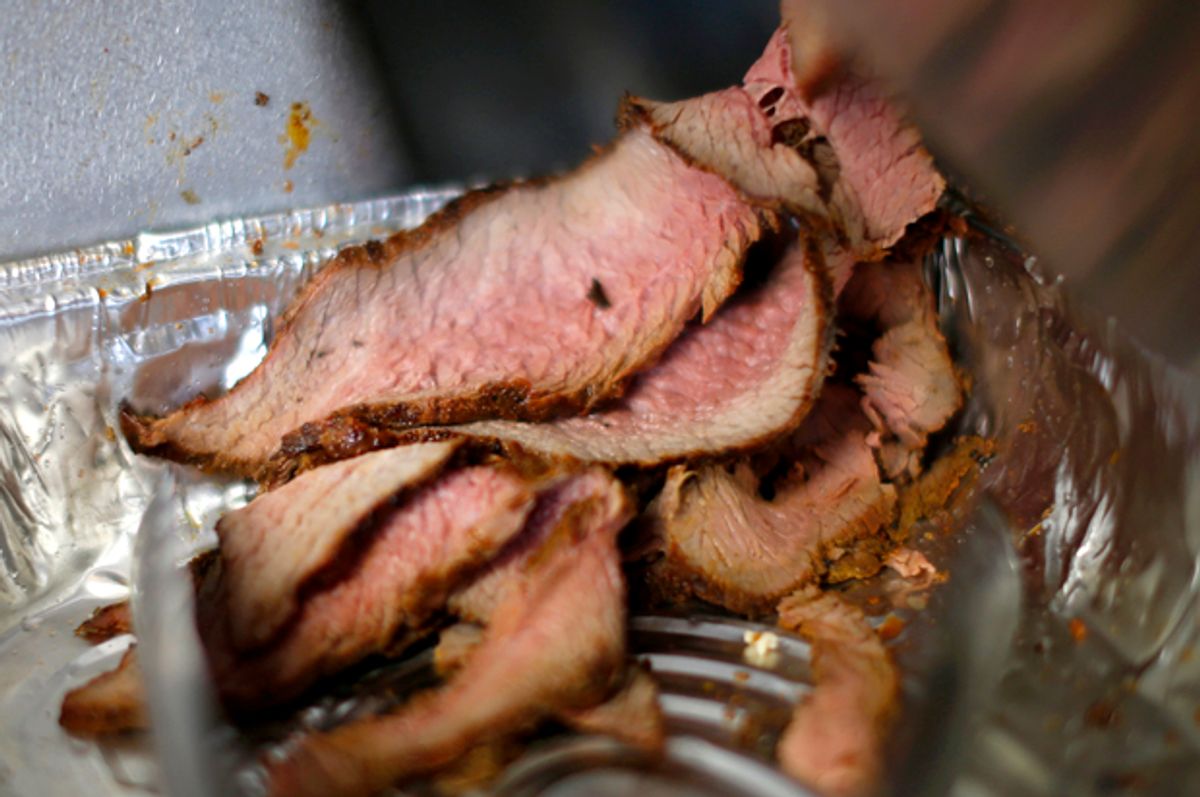 The regular session of the 84th Texas legislature ends in less than 30 days, which means state lawmakers officially have more hateful bills to consider than they have time to do the considering.

As Andrea Grimes noted last Friday, the final stretch of the session — which could very well be extended into special sessions that are notoriously ripe for passing, say, highly restrictive antiabortion measures — will be populated by hearings and debate over the second-highest number of abortion-related bills to be filed during a regular session in a decade. Some of the 32 bills that could, in theory, be passed in the next month are meant to reverse antiabortion measures enacted in previous sessions, but the overwhelming majority would further limit Texans’ access to reproductive healthcare. (Grimes has a comprehensive — and, as a corollary, horrifying — guide to the abortion-related bills at RH Reality Check.)

Of course, anti-woman laws aren’t the only odious measures the Texas legislature is considering. Republican lawmakers are also pushing a measure that would allow clergy members to refuse to marry same-sex couples, and have refused to include amendments that would prevent religious leaders from invoking “religious freedom” as an excuse for discriminating against LGBT people in secular contexts. Debate over the bill has been particularly bigoted: Earlier this week, the Texas Senate State Affairs Committee heard testimony from several pastors and anti-LGBT activists who support the bill, many of whom equated same-sex marriage with bestiality and pedophilia. Some of the bill’s supporters also insisted that preventing clergy from discriminating against same-sex couples is a “hate crime.”

And that’s the stuff, really, that is most unbelievable (if unsurprising) about the spate of anti-woman, anti-LGBT measures Texas lawmakers could still pass this session: It’s all in the way they talk about laws that could pose serious threats to the health and well-being of thousands of people. It’s mind-boggling — and at this late-in-the-game stage of the legislative session, it’s overwhelming how much hate there’s still left to sift through and to spread.

Here's a roundup of some of the most egregious measures the Texas legislature has filed and considered this session:

HB 1648, the “Coerced Abortion Prevention” Measure
Antiabortion activist Molly White became antiabortion lawmaker Molly White last year, and used her freshman term at the statehouse to craft an abortion restriction so overreaching that several religious groups — as well as her colleagues in the Texas GOP — wouldn’t touch it. The bill would initiate an automatic 72-hour waiting period and criminal investigation if women indicate that they have been coerced or forced to have an abortion, which White claimed was in the interest of assisting victims of assault.

“Pregnant women are most frequently victims of domestic violence,” White explained during a House State Affairs Committee hearing. “Their partners often threaten violence and abuse if the woman continues her pregnancy.”

But, as representatives from two antiabortion groups highlighted in their challenges to the measure, increasing Texas’ existing abortion waiting period for DV victims could put them at even greater risk.

SB 575, the “Hell No We’re Not Providing Insurance Coverage For Abortion” Measure
On Tuesday, the Texas Senate approved State Sen. Larry Taylor’s measure to prohibit health insurance coverage — be it private or purchased through the Affordable Care Act marketplace — for all abortions that are not considered medical emergencies. The bill requires women who seek coverage for abortions — including victims of rape or incest, or women carrying non-viable pregnancies due to fetal anomalies — to purchase supplemental insurance, effectively making abortion inaccessible to those who cannot afford additional insurance (or any insurance at all).

When asked to explain why the bill did not contain exceptions for victims of rape or incest, Taylor acknowledged that the measure “just doesn’t address it,” and also dismissed very realistic, detrimental outcomes of his law as “extreme.”

SB 2, the "We Are Going To Try Again To Defund Planned Parenthood" Measure
It seems the only sport that might be as popular as football in Texas is trying to defund Planned Parenthood — so, naturally, the state legislature tried to shut down funding for the organization once again this session. In its 2015 budget, the Texas Senate proposed a reallocation of state funding for breast and cervical cancer screenings, which would effectively eliminate funding to Planned Parenthood’s program— and, of course, to the thousands of Texans who rely on the program to, you know, determine if they have cancer.

State Sen. Jane Nelson, who crafted the reallocation measure, was transparent about her goals: “There are many members that feel very strongly that the facilities that receive that funding should not be facilities that are performing abortions, so the answer is: Don’t perform abortions and you get the money.”

HB 2510, the "This Bill Is Actually About The Health Code, But We're Going To Try To Make Women Carry Non-Viable Pregnancies To Term Because The World Is Full Of Sin" Measure
Republican Rep. Matt Schaefer sneakily attempted to add one of the session’s most abhorrent, misogynistic measures to a bill about the bureaucratic operations of the state health department, which would prohibit health centers from performing abortions “on the basis that the fetus has a severe and irreversible abnormality.” Essentially, the bill would have required pregnant women to carry non-viable fetuses to term, likely under the most heartbreaking of circumstances.

Schaefer’s reason? Because the fetuses “are going to suffer, they’re going to feel pain,” and “that’s part of the human condition, when sin entered the world, and it grieves us all.”

SB 2065, the "It's A Hate Crime Not To Allow People To Say They Won't Marry Same-Sex Couples" Measure
Earlier this week Texas’ Senate State Affairs Committee refused to amend a measure that has been likened to Indiana’s controversial Religious Freedom Restoration Act (don’t worry, it’s not the only bill to be compared to the Indiana law this session). The bill, which was filed long past the filing deadline but allowed after a suspension of the rules, would allow clergy to refuse to marry same-sex couples, but does not apply specifically to marriage ceremonies.

The law could therefore open the door for officials to refuse to issue marriage licenses to same-sex couples in secular contexts on the basis of religious liberty, and could also allow for other forms of marriage discrimination (such as denying an interracial couple a marriage license). Supporters of the measure claim it’s an important protection for religious groups who oppose marriage equality, the enforcement of which they believe would be a “hate crime” and its own form of “bigotry.”

HB 1942, the "Let's Prevent Judicial Bypasses For Abortion By Publicizing Approving Judges' Personal Information" Measure and HB 3994, the "Let's Prevent Judicial Bypasses For Abortion By Making It Virtually Impossible For A Minor To Meet The Burden Of Proof" Measure
Texas currently offers pregnant minors the ability to seek judicial bypass for parental consent laws in order to access abortion care, but Republican lawmakers introduced two bills this session that would sharply reduce its effectiveness. One measure would make Texas the first state to publicly release personal information about judges who approve judicial bypasses for abortion, which would likely instigate a chilling effect that prevents minors from terminating pregnancies.

The other bill would update the burden of proof on minors seeking judicial bypass, requiring they be “mature and sufficiently well informed” about their decision to terminate, that notification of a parent would not serve the teen’s best interest, or that notifying a parent “may lead to physical, sexual or emotional abuse” to access an abortion. Phil King, who introduced the changes, said he would change the requirements so that the current burden of proof — that minors prove just one tenet — could stay in place. But then he…didn’t.

SJR 10, the "We Don't Have Enough Religious Liberty Protections As It Is So Let's Give Businesses License To Discriminate" Measure
Remember how I mentioned that there was more than one Texas bill that had been compared to Indiana’s anti-LGBT religious freedom law? Yeah, well: State Sen. Donna Campbell introduced a constitutional amendment — for a second time — that would effectively grant business owners a “license to discriminate” against LGBT people (but, really, anyone).

The amendment would be in addition to the state’s existing Religious Freedom Restoration Act, and would have a number of unintended consequences — some of which don’t sound so bad. In addition to opening an opportunity for, say, the Westboro Baptist Church to picket military funerals, Campbell’s amendment could also allow pregnant women to circumvent Texas’ antiabortion laws on the basis of their religious beliefs.

Again — maybe not all the measures Texas has considered this session are so hateful.