White Americans know nothing about Baltimore's pain, but that hasn't stopped them from condemning its protests 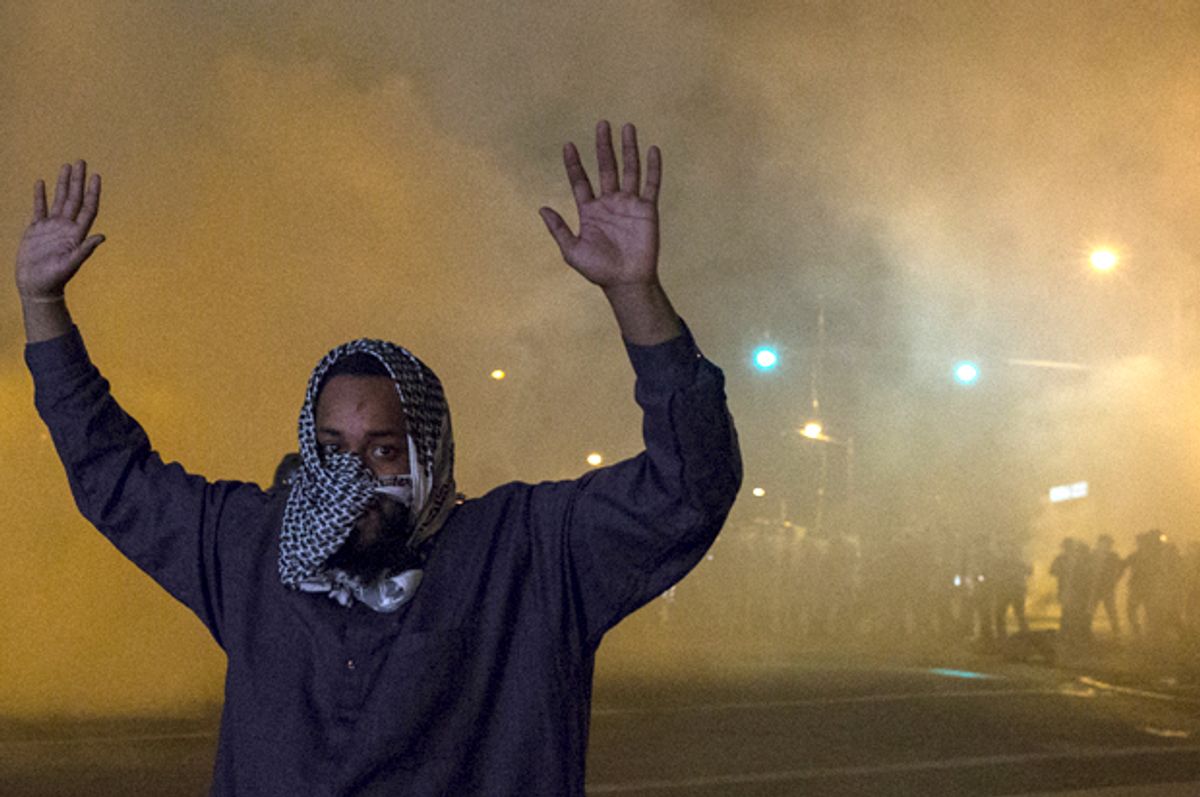 A man attempting to keep peace between protesters and riot police in Baltimore, April 28, 2015. (Reuters/Adrees Latif)
--

I hate ’splaining of all kinds—I even hate the word—which is why I typically resist the urge to do so. But desperate times call for desperate measures, so I am going to muster some chutzpah just this once and whitesplain to whitesplainers the level of ignorance, presumptuousness and condescension it takes to whitesplain race and racism, revolutions and riots and righteous rage to Black people.

Full disclosure: I’m guilty of this too. I’ve gotten ensnared in heated conversations on Facebook threads with people—namely White people, some whom I know, some I don't. And I am not writing this with the intent to shame them but rather, to borrow a phrase from Malcolm X, "make it plain."

I don’t live in Baltimore. I’ve never lived in Ferguson. I do live in New York City. I was fortunate enough to grow up in a middle-class home, live in a middle-class neighborhood, attend good schools and go on to a good college. I have almost always been gainfully employed. Today, I have a nice home and live a comfortable life. I have experienced discrimination as a Jew, a gay person, and a woman. But I am privileged because I am White and that is no small thing.

I am also the mother of a Black son who is currently 3-1/2. The other day, he came home from preschool and spontaneously declared, “I’m happy,” a wide smile beaming across his gorgeous little face. It made me proud because, well, I’m his mom and I love him like crazy. And it shattered my heart because I know he is living in a bubble of innocence that has an end date. Because one day, in the not-too-distant future, my wife and I are going to have to burst that bubble and start having awful conversations with him. We’ll have to explain the hideousness of racism and watch his big, beautiful smile fall, his lips quiver, and his whole face crumple into confusion and disillusionment. My wife and I will be devastated if he loses his sense of joy and humor—he naturally radiates these qualities. But in order for him to hold onto them, we have to prepare him for the ugliness out in the world. And there is so much fucking ugly that awaits him. I can’t even fathom how much. I can only be terrified and enraged and offer my support in the fight. And do every goddamn thing I can to protect my son.

What I can’t and won’t do, though, is presume to know what it’ll be like to be my son, a Black man attempting to navigate this country.

Just as I can’t and won’t presume to understand to the fullest level the fury, fear, and grief that the Black citizens of Baltimore are experiencing in reaction to the murder of Freddie Gray, the 25-year-old man who had his spinal cord severed and his throat crushed after being chased and tackled by six cops on April 12. His death a week later led to the Baltimore Uprising that is currently being led by young people on fire with righteous rage in the face of oppressive and systemic racism.

I also don’t know what it’s like to live in his neighborhood, Sandtown-Winchester, which is so toxic with lead that it can “poison the children and leave them incapacitated"; so poor that half the residents are unemployed and a third of the homes are vacant. I don’t know what it’s like to be one of the neglected and abused citizens of a city plagued by a long history of police brutality (100-plus people have won court judgments or settlements relating to allegations of police brutality or civil rights violations in the past four years). I don’t know what it’s like to be faced with foreclosures, and the subprime mortgage crisis, and unemployment, and poverty and crime and shitty schools. I can’t even begin to comprehend feeling constantly under siege and disregarded, as if I have no rights at all.

And this isn’t just about Baltimore. This is about America and the 1.5 million missing Black men. This is about Mike Brown and Tamir Rice and Eric Garner and Akai Gurley, and women like Rekia Boyd whose deaths never received the level of outrage, disgust and organized action that they deserve. This is about so many names, so many lives that we do and do not know. There are just too many—too, too many.

No, I don’t know what that’s like. I couldn’t possibly. And most likely, White readers, you don’t either. White people here on the sidelines, with our good intentions, we have to resist the urge to finger-wag and get into Facebook and Twitter fights. I am including myself in this. And some of you—and I am grateful that I haven't personally encountered this among my friends but I have overheard this in conversations, and seen this on other people’s threads—please stop with the “thugs,” and “the Blacks,” and the “you people.” It’s been said before and bears repeating: “Thug” is just another way of saying the n-word, so unless you really mean to use that hideous word, stop yourself.

It’s most definitely not the place of a White person to tell the Black Lives Matter protesters how to run a revolution, whether in Ferguson, New York City, Baltimore, or anywhere else. Because that is what this is: a revolution. Yes, a CVS was burned down and a mall was looted, and chaos broke out. But where was our outrage during the subprime mortgage crisis that left Baltimore devastated and its inhabitants homeless and scrambling? And where was the righteous rage when a bunch of White kids tore apart Keane, New Hampshire and lit the town on fire because of … pumpkins?

Yet, here we are, more enraged over a burned-down CVS than a Black man’s life being taken from him because he dared to make eye contact with police and run in the United States of America. Incidentally, look who was cleaning up and restoring order in Baltimore: the protesters and residents themselves. But the media doesn’t focus on that. It hardly matters, though. The real question is, as Nick Chiles at the Atlanta Black Starwrites, “Why doesn’t it happen more often? … From the relative comfort of white privilege, it may be hard to understand the nihilistic rage that accompanies Black oppression. Even for those Black people in America who are fairly well off, below the surface there is always a slow simmer of frustration and anger over slights and slams, big and small. For those truly on the margins, there is a visceral desire to disrupt and alarm. To disturb a system whose prosperity requires the suffering and disregarding of poor Black people … If you are going to create the largest wealth and income gap in American history, an economic system that has become noteworthy for its lopsidedness, you must expect periodic explosions.”

The most important thing that we can do—other than use our power to vote, be active in our communities, and to advocate where we can—is to make it our business to listen, to observe, to read the history and the facts divorced from whatever implicit racial biases we hold. Make it our business to read op-eds by people who know first-hand the experience of living on the margins. Appreciate the plight of the people fighting the fight. Support the work and the revolution. We can ask questions but make sure we’re really listening to the answers.

My son already recognizes our different skin colors and proudly declares nearly every morning these days that he is brown. And each day, with every murder and act of brutality toward a person of color, I am painfully reminded that my wife and I have the great challenge as White parents of a Black child to not fall into the trap of whitesplaining race and racism to him. Because no matter how much we protect him with the love and vigilance of any parent, and the privilege afforded us as White bourgeois people, he will still grow up to be a Black man in a society that, on its best day, disrespects him. And he will experience injustices that we have never endured, and will never endure. And while we’ve long been outraged and will always be outraged, we can never know what it’s like to feel his fear and fury if and when he is eyed suspiciously in a store, or running down the street, or walking with a group of Black friends in our Brooklyn neighborhood, or stopped-and-frisked by cops at random. Or being called any sort of epithet, for the first, fifth, god-only-knows-how-many times.

What I’ve done so far and what I will continue to do is what I’ve suggested: read, listen, observe. And engage in dialogue with other mothers of Black sons—Black women and also White women. I am fortunate that, in addition to the incredible friends I've made throughout my life, in my role as the executive editor here at DAME I've had the rare opportunity to become friends with some extraordinary women, initially through their writing—both for this publication and other publications. And I am so grateful for their friendship and the generosity of the insight and wisdom they’ve shared, both in their work and through our personal conversations, about how to raise a child of color in this world—advice that has been helping to prepare my family for what we are about to embark on together, for life. Because we’re all in this together for as long as there is racism, which isn’t going away anytime soon. I anticipate my son will be frustrated with us. We will make mistakes—small ones, big ones. He may resent us, act out against us, beyond the usual way that kids do. And my wife and I will have to understand that, forgive it, get it. The best thing we can do is be open. Be aware. And above all, assure him that we’re always listening, taking him seriously, here for him. No, we will never know what it’s like to be a Black man, but our little boy who will one day be a man will always be our son, and we will always have his back.