Life imitates "South Park" but with one crucial difference: Pamela Geller wants to intensify fear, not dimininsh it 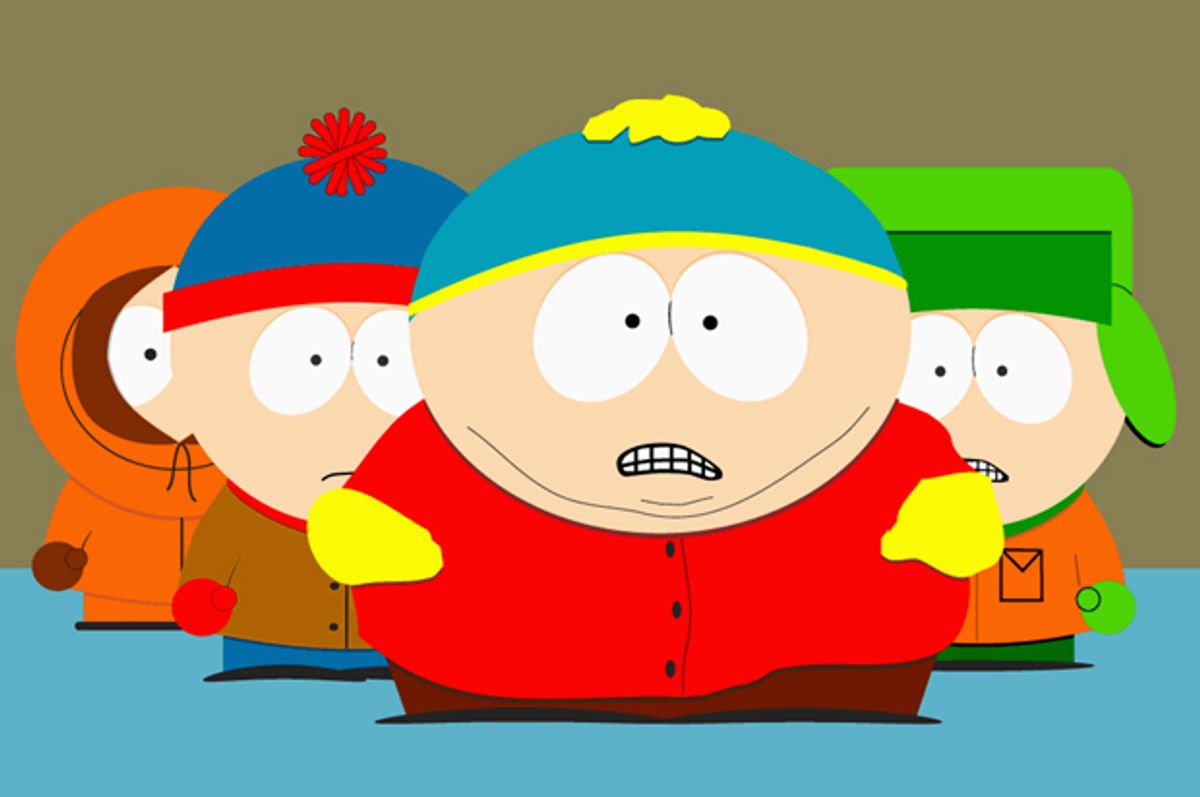 On Sunday, two assailants attacked the “Jihad Watch Muhammad Art Exhibit and Cartoon Contest” in Garland, Texas. The attack left both assailants dead and a security guard wounded.   Coming as it does on the heels of the attacks on the Charlie Hebdo cartoonists in Paris, it has sparked a new round of debate over the line between free speech and hate speech. And it has returned us again to the question of whether or not it is an unacceptable offense to challenge Muslim practices by depicting the Prophet Mohammed.

But, even though the organizer of the event, Pamela Geller, cites the Charlie Hebdo attacks as the spark that led to her plans to sponsor a Mohammed drawing cartoon contest, there is another precedent to the event.  In fact, arguably, Geller simply ripped off an idea that gathered major media attention back in May 2010.   That event was held in response to Comedy Central’s decision to censor an episode of South Park that included a depiction of the prophet after they were threatened by an extremist group. Cartoonist Molly Norris decided to respond to the censorship by posting a cartoon of a poster on the Internet titled “Everybody Draw Mohammed Day.”  The cartoon led to an almost identical set of debates to the one we are having now—but there are very key differences to these two events, differences that reveal a lot about the distinction between satire and hate speech.

First, let’s review a bit about the 2010 event.  It starts with Norris’ cartoon.  Her idea was simple: If everyone drew the prophet, then it would make it impossible for terrorists to determine whom to target.  As she stated on her website:

“Do your part to both water down the pool of targets and, oh yeah, defend a little something our country is famous for (but maybe not for long? Comedy Central cooperated with terrorists and pulled the episode) the first amendment.”

The poster included a claim of sponsorship by an organization named "Citizens Against Citizens Against Humor or CACAH (pronounced ca-ca)", which Norris later explained was clearly meant to be satirical.  But before she knew it, the satire was lost, and there were Facebook groups organizing to host events alongside Facebook groups organizing to protest the events.  Norris found herself in the middle of a storm about free speech, respect for Islam, and satire.  She repeatedly explained that her efforts were more about protecting the rights of fellow cartoonists than attacking Islam and she insisted that her poster was ironic: "I, the cartoonist, NEVER launched a draw Mohammed day. It is, in this FICTIONAL poster sponsored by this FICTIONAL GROUP. SATIRE about a CURRENT EVENT, people!!! (That's what cartoonists do!)"

Despite distancing herself from her cartoon and despite efforts to bring the idea of everyone drawing Mohammed back into the realm of satire, Norris lost control of her poster and the idea behind it.  Others went forward with the event and Norris tried to stay out of the media mess.  Eventually Norris ended up on an al-Qaeda hit list published in the English version of Inspire, the terrorist groups propaganda magazine. That same hit list also included Charlie Hebdo editor Stéphane Charbonnier, who was killed in the Paris attacks.  Shortly after the list was published Norris changed her name and went into hiding.  In one of her last public statements she told The Washington Post "I just want to go back to my quiet life."

Meanwhile in the latest plan to draw cartoons of the Prophet Mohammed, we have a completely different character in Geller.  Geller, outspoken President of the American Freedom Defense Initiative as well as Stop Islamization of America, seems to want anything but quiet.  Rather than attempt to spark a debate about how fear, threats, and aggression can lead to censorship of satirical cartoons, Geller wants to draw out a fierce debate about the evils of the Islamic community.  She wants to hype fear, not diminish it.

Even though she bristles at the idea that she would be characterized as anti-Islam the Southern Poverty Law Center describes her as “the anti-Muslim movement's most visible and flamboyant figurehead. She's relentlessly shrill and coarse in her broad-brush denunciations of Islam.”  They clearly describe her work as an example of hate speech.

Now we can all agree that violence is an inappropriate response to speech of any kind.  And the attacks are an outrage.  That is clear.

But there is a radical difference between satire and hate speech.  While many debated whether the Charlie Hebdo cartoons had gone too far, there is little question that the “Jihad Watch Muhammad Art Exhibit and Cartoon Contest” had none of the irony, critique, or sarcasm of satire.  It was just aggressive.   Satire, of course, can get mean too.  It can cross the line and punch down when it is supposed to punch up, but it’s goal is to attack ideas and institutions that deserve critical scrutiny and productive skepticism.

So we should not be surprised that the editor-in-chief of Charlie Hebdo was outraged to hear that Geller organized her event in honor of the magazine.  Gerard Biard told The Guardian "When we make a cartoon of the prophet Muhammad, or Jesus, or Moses, we don't mock or attack people. We mock or attack institutions, representatives, powers, and, again, political powers." At the heart of satire is the interest in calling attention to accepted truths, to questing the status quo, and to exposing a lack of critical thinking.  Geller’s project demands that her followers work entirely off of fear-based emotions, leaving all reason aside.

This, of course, may be her greatest insult to the idea of free speech.  Free speech is not a license to be stupid; in fact, the very right to free speech depends on the idea that humans are rational subjects.   Sure we defend all sorts of speech under the notion of the first amendment, but we would never have even had such an amendment without a firm belief that the rights of the citizen should be grounded in reason and not faith.  And there is no greater testament to reason than satire.  Satire requires the brain to understand layers of meaning, to unpack irony, and to form independent ideas.

This is why we need to see Geller as another example of the faith-based, fear-mongering thinking that increasingly defines the GOP, rather than the critical satire of Molly Norris’s cartoon poster or the work of Charlie Hebdo. Clearly Geller seems to be attempting to incite the exact sort of violence that took place in Garland, Texas. In fact, it is worth asking if she already knew about the controversy surrounding the first cartoon effort.  If she did, and there is good reason to suspect the possibility, then it is worth wondering whether Geller was hoping for violence.  She clearly knew what had already happened to Charlie Hebdo.  As she all-too-excitedly claimed after the attacks: “This is a war, and the war is here.”

While she continues to whip up hype and hysteria, her anti-Islam smear campaign is about to come under satirical fire as a group of Muslims launch the “Fighting-Bigotry-with-Delightful-Posters Campaign” set to appear in New York City buses and subways next week.  The entire series is aimed directly at exposing the deep-seated bigotry of her projects. According to the organizers: “We decided our ads would be ridiculous, totally loving, and/or (hopefully) hilarious.”

They go on to explain that they are explicitly using satirical humor to expose hate speech: “So why not ignore that Certain Bigot’s posters and check out ours? Besides, if you’re stuck on a subway platform staring at posters, wouldn’t you rather be laughing? Hate just doesn’t have the same entertainment value!”  Their optimism is infectious, but sadly they miss the reality that for extremists like Geller who don’t understand satire, hate is extremely entertaining.