Retired judge unloads on hypocritical Supreme Court: "They’re talking out of both sides of their mouth"

The Court is all over the map on campaign finance — and U.S. democracy is hurting for it, James Nelson tells Salon 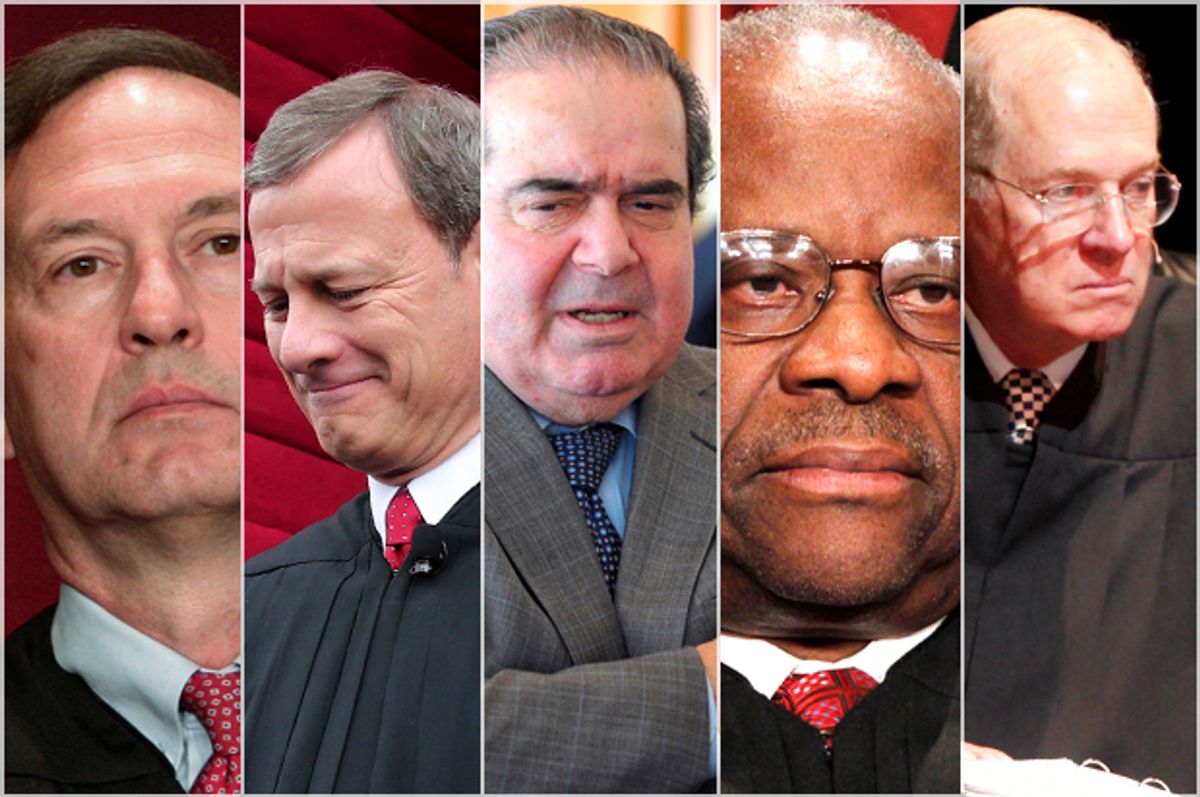 When the current Supreme Court makes news with a ruling pertaining to campaign finance, it is, almost without exception, a bad day for those who’d like to constrain money’s influence on American government. But I write “almost without exception” for a reason — because on the second-to-last day of April, when precious few were paying attention, the Supreme Court issued a ruling to make it harder for the wealthy to buy control of the government. (Shockingly, this news was not accompanied by a report of a pig who learned to fly.)

Yet while the so-called Williams-Yulee ruling, which upheld a Florida law barring judicial candidates from personally seeking campaign funds from donors, was greeted by many in the campaign finance reform community as a welcome surprise, many also found it to be an unwelcome reminder of the Citizens United ruling’s flaws. One such person was former Montana Supreme Court Justice James Nelson, now a board member for Free Speech for People, who supported the Williams-Yulee ruling but felt compelled to point out how its logic was incompatible with that of Court in Citizens United.

Recently, Salon spoke with Nelson over the phone about the ruling, as well as his concerns regarding the ongoing deregulation of campaign finance. Our conversation is below and has been edited for clarity and length.

The first thing I wanted to ask you is how would you assess the impacts of the Citizens United ruling, especially compared to your initial reaction when it was handed down?

Well, when it was handed down and I read it, I was just absolutely appalled at the breadth of the language and the decision that the court used. I knew that the court had opened a pandora’s box, a can of worms, whatever you want to call it, that was going to really affect not only American politics, but my concern was and still is its effect upon the judicial branches in the states, the states that elect their judges.

So specifically from that angle, how do things look right now?

Well, since Citizens United, there have been two academic studies sponsored by the American Constitution Society, one called “Justice at Risk” and the other called “Skewed Justice.” The first study basically assessed the effect of money in judicial elections and judicial decision making in the civil justice field. The second, “Skewed Justice,” talked about those same effects in the criminal justice field. Without going into detail about those studies and the detailed findings that were made, both studies have shown that money in judicial races not only affects the election process itself detrimentally, but it affects the way judges make decisions.

In civil cases, “Justice and Risk” showed that money that is spent for or on behalf of judges in judicial races affects the way they vote. They tend to vote for the businesses or the people that give them the most money. In the criminal justice field, the study has shown, and it can’t be more frightening, really, that judges look over their shoulders when they’re making decisions in high-profile criminal cases. When the case could go either way, where it’s a marginal case, very often the defendants rights fall prey to the judge’s paranoia over what the decision will do to his or her chances of getting re-elected the next time around. It’s happened in a couple of supreme court cases, where incumbent justices have actually been defeated because of the negative, Willie Horton attack-type ads that are used against them in these campaigns.

Well, I think that the court was right. Don’t get me wrong here, I absolutely do not agree with Citizens United and what it unleashed in the political process for the executive and legislative branches or congressional branches. The amount of money that’s poured in and affecting these races is just stunning to say the least.

Having said that, where states elect judges, judges are supposed to be different. They’re supposed to be fair, they’re supposed to be impartial, and they’re supposed to be independent. That’s the hallmark of the judiciary. When people come to court, they don’t want to come before a judge where the wheels of justice have been greased by obligation and money. That’s what’s happening and that’s what’s frightening. I think the U.S. Supreme Court was correct in recognizing that judges are different, judicial elections are different, and that there’s an integrity of the judiciary to protect. That’s why they rendered the decision in Yulee that they did. It was a frightfully rare decision from this court, which basically said that judges can be sanctioned if their local canons of ethics prohibit them from personally soliciting campaign contributions, and they do. So I think the court was correct in that.

Where I disagree with the court, though, is that they’re talking out of both sides of their mouth. On the one side, in the Yulee decision they make a big thing about judicial independence and judicial integrity and the public’s perception of the judiciary and judges and ground their decision on that. And yet, on the other side, the Citizens United is allowing vast amounts of money to be poured into judicial races that does to the judiciary exactly what they said shouldn’t happen in Yulee. It decreases the public’s perception of fairness, it decreases the integrity in the court, it decreases the dignity of the court. Money is affecting judicial races, it’s affecting elections, and it’s affecting the way judges make decisions. This Supreme Court in many ways I think is living in a parallel universe, and this is a perfect example of that. You can’t have it both ways. You can’t say that the public expects fair judges and courts with integrity, and then allow dark money PACs to pour money into races that adversely affects that.

Were you surprised by the ruling?

I was, not only because of Citizens United. I was because of a previous case, Republican Party of Minnesota v. White, which contrary to most canons of ethics at that time, allowed judges to state their positions on issues while campaigning. So I was surprised, yeah I was.

Do you worry that the influence of big money on judicial elections will change the type of person who tries to be elected to the bench?

Absolutely, and I can give you a current example of that. In Montana’s last election for the Supreme Court, there were two people running. They were both incumbents, one person didn’t have any trouble at all. But the other fellow, who was probably more progressive, a candidate ran against him, and I’m not making any of this up, this candidate had never practiced law in Montana except for about an 18-month stint as the solicitor for our current attorney general. He’d never had a case in Montana, he never sat across the desk from a client, he’d never appeared before any court in Montana except for the Supreme Court once or twice. He had absolutely no experience practicing law in Montana, really practicing law. And yet, this fellow was running for the Montana Supreme Court and he got tons of money.

The thing that’s frightening to me is that next election cycle on the Montana Supreme Court, we’ve got three seats up for election. If the Koch brothers and some of these dark money groups decide to change the complexion of the Montana Supreme Court, they can do it. They can dump $10-, $15 million into a race like those in Montana and probably swing the election. They’re going to change the complete, ideological composition of the court and they're going to very possibly unseat two incumbents and put in the third person, who is basically a political hack. I think that’s extremely frightening.

Why frightening rather than concerning or problematic?

What people don’t understand — and I’m not trying to get on a rant here — but what I don’t think the public understands is that right now, big money, corporate America, just a few individuals with their contributions, basically control Congress. They control a lot of state legislatures, they pretty much control the executive branches at both the state and federal level; and money talks. If these folks want to control government — and they do, that’s what they’re out to do — they’ve got one branch left that they’ve got to get ahold of, and that is the judicial branch.

Historically, the judiciary has always been the fly in the ointment. If unconstitutional laws are passed, judges are there to undo that sort of mischief. Courts are there to protect the weak, the innocent, criminal defendants' rights. Courts are an independent third branch of our country, one of the most important checks and balances against the other two branches that we have. If big money takes over that third branch, and I think it’s going to happen, if it takes over that third branch, we citizens have nowhere left to turn.

You don't sound optimistic — at least in the short-term.

I think it’s going to get worse and I think the Supreme Court has already demonstrated that. On the heels of Citizens United, you had McCutcheon where they raised the stakes again by taking off contribution limits. Contribution limits are under attack in the states. Montana just passed a disclosure act this last legislative session, very controversial, but it was passed. So I think that’s probably going to be challenged and we’ll see where that goes if it reaches the U.S. Supreme Court.

So far, the court has allowed for disclosure, but Justice Thomas in his dissent in Citizens United was very concerned that imposing disclosure requirements on these people would expend money through tax and so forth. If we make them tell who they are, that’s going to chill their right to free speech, as if they didn’t have enough already. So I don’t know, I’m not very optimistic. I’m frankly pessimistic about it.