Rise of the GOP's culture-war zombies: Why the party of right-wing extremism will never give it up

Many on the left like to think that the culture war is a thing of the past. They couldn't be more wrong. 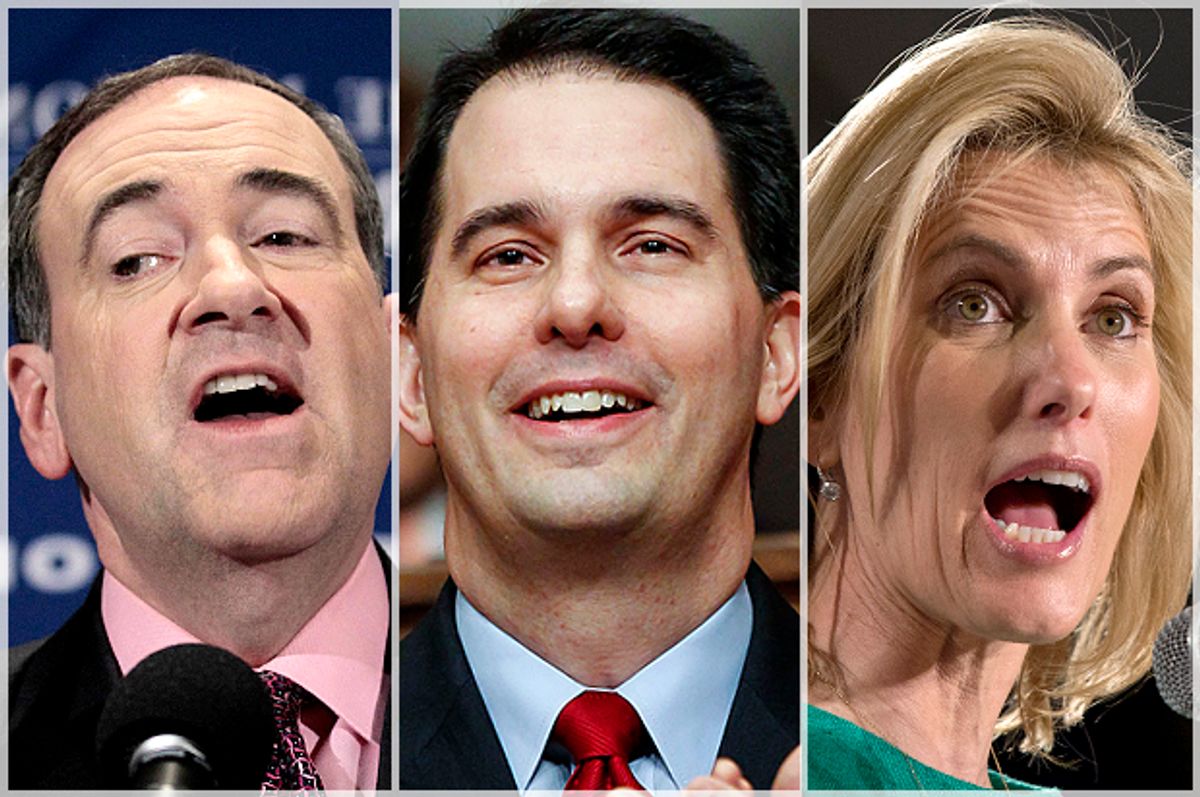 One of the more predictable tropes on the left side of America's political dial is the notion that the culture wars are over, that Christian conservatives are in retreat, and that the far right is breaking up due to its irrelevance. This happens periodically, whether Democrats have recently won or lost an election, and it happens especially when liberals and progressives win a victory on policy. For some reason there is a great propensity for liberals to declare that they've vanquished the right for all time, only to get sucker punched by a conservative in mid-high five.

It's a lovely fantasy but the culture war isn't some little skirmish that happened sometime in the 1990s and became irrelevant in the modern world, like pagers or AOL. It's always been with us --- the ying and yang of American life. It's not to say that progress is never made. It obviously is. But it's almost always a case of two steps forward one step back, and sometimes that step back is a doozy.

Governor Mike Huckabee's entrance into the presidential contest sparked more than a little derisive laughter among progressives, many of whom agreed with the premise of this article, which said he cannot win because, of course, the culture war is over. For all his populist rhetoric about economic security, defending certain government programs and raining hellfire on free trade, it's assumed that his right wing hawkishness and social conservatism are relics of the past, rendering him an anachronism. This is wrong. Contrary to popular wisdom, conservatives are not a majority of the country, and never have been, but they do represent a majority of the Republican Party. (Indeed, finding a moderate in the Republican Party these days is like trying to find a non-millionaire in the US Senate. They're there, but there aren't very many of them.) And Huckabee isn't saying anything  on the culture war issues they don't like hearing. Quite the opposite.

It must be noted that the assumption of a culture war victory in the current political moment doesn't come completely out of nowhere. There has been an astonishingly successful progressive march toward marriage equality, which, even if the Supreme Court rules against it, will be very hard to turn back. But that does not mean the other side will simply give up and say, "You won! Mazel tov!" If anything, it will empower the entrepreneurial culture warriors to crank up the fundraising and make a little cash.

But aside from marriage equality, let's take a look at the status of other culture war issues, and see if they might have some salience in the coming elections. First, let's look at immigration. Liberals may not see this as a culture war issue, but conservatives certainly do. (They don't all have to do with religion and sex, after all.) Indeed, nativism and xenophobia are organizing principles on the far right. All you have to do is listen to talk radio to see this openly discussed. Here's Laura Ingraham on her favorite topic:

“Our national power and identity comes in part from our shared American culture and language. This power will continue to be eaten away if we don’t stop the double-talk and defend our borders.”

"Our shared American culture" evidently precludes Latinos, which is going to come a something of a surprise to people who live in states with names like "California" or "New Mexico." But nonetheless, one of the biggest right wing culture warrior victories of the past few years was the toppling of Republican leader Eric Cantor, largely on the basis of the argument Ingraham makes above. They are not going to stop using it, no matter how much the GOP's moneyed elite tells them to ixnay the Latino bashing. This is fundamental.

Let's take a look at another culture war issues that's raging today: police violence. And yes, it certainly is a culture war issue. And all you have to do is look at any right wing blog or watch Fox News for an hour to see exactly how it's playing. Sean Hannity summed up the right's view of the issue of young black men being brutalized by police when he said: "You know, there’s a simple solution in terms of, for other people going forward. Don’t be involved in the sale of drugs, don’t think police are your enemies, don’t run at 8:30 in the morning when you see a cop." The "respect authority" theme always rises to the surface when it comes to African Americans and urban unrest. (And yes, there are pockets of civil libertarian principle on the right. They are a minority.) Polling shows a stark divide on this issue between the races and the parties:

Overall, 73% of Democrats say police departments nationwide do an only fair (27%) or poor (46%) job holding officers accountable when misconduct occurs; this compares with 52% of Republicans who rate police performance in this area as only fair (29%) or poor (23%).

Among Democrats, blacks are 33 points more likely than whites to say police departments do a poor job holding officers accountable (67% vs. 34%). Nonetheless, white Democrats remain more critical of accountability at police departments across the country than Republicans overall.

It's fair to assume that the vast majority of whites who side with African Americans on this (nearly 40 percent) fall on the left side of the political divide.

Interestingly, the "respect authority" theme falls away when some property owner like Cliven Bundy decides he doesn't want to pay his taxes. This too is very much a matter of cultural identification just as much as gay rights are. The belief in "sovereign citizenship" comes right out of the philosophy that says the government should not tax people to pay for the "undeserving."

Let's recall what Mr Bundy had to say about all this:

“And because they were basically on government subsidy, so now what do they do?” he asked. “They abort their young children, they put their young men in jail, because they never learned how to pick cotton. And I’ve often wondered, are they better off as slaves, picking cotton and having a family life and doing things, or are they better off under government subsidy? They didn’t get no more freedom. They got less freedom.”

There are many conservatives who don't identify with Bundy's crude characterization. A lot of them were appalled. But they should recognize that Bundy's characterization of lazy black people lies at the heart of their movement's loathing for the federal government: The belief that government is taking money from Real Americans like Cliven Bundy and giving it to people who would be better off as slaves is the foundation of the conservative loathing of federal power

Of course the Bundy standoff wasn't just about taxes or federal government overreach. It was also about guns and there is no more sharp a culture-war signifier than the alleged right to pack heat pretty much anywhere. Despite (or rather because of) the horrifying mass shootings of small children and innocent theatre goers, which would have led any sane culture to curtail the proliferation of deadly weapons, the rightwing gun activists have managed to do the opposite. We are seeing laws passed all over the country allowing more guns to be brandished in public places. This battle in the culture war is raging and it's taking a lot of casualties.

Again, the Bundy Ranch was a watershed for another kind of culture warrior. This Reuters report explores how the standoff emboldened the right wing militia movement, and it quotes conspiracy theorist Alex Jones, speaking for the right:

Americans showed up with guns and said, 'No, you're not," before confronting the armed BLM agents, Jones said in a telephone interview. "And they said, 'Shoot us.' And they did not. That's epic. And it's going to happen more."

If one were to take all these right-wing leaders at their word, one might assume that it is wrong to run from a cop, but facing him down with a gun is a-ok. But then we know that's not a matter of strict principle after seeing the outpouring of right-wing anger at New York City mayor Bill de Blasio for telling his African American son to be cautious when he deals with police. So this is all very much a matter of whom they decide is the "bad guy" at any given moment. They know them when they see them.

And finally, as our friend Cliven Bu ndy also mentioned in his revealing screed, we have the granddaddy of all culture war issues: abortion. To think the culture war is over when it is being fought in the trenches of nearly every red state in the union is fairly mind-boggling. According to the Guttmacher Institute, we have seen 231 abortion restrictions enacted in just the last four years. In Indiana, they are prosecuting women and putting them in jail for "illegal" abortions.

But that doesn't mean they have won. The Guttmacher Institute also reports that 18 states have recently enacted 95 laws to expand abortion rights, the most since 1990. It would appear that the culture war, at least when it comes to abortion rights, has become a war between the states.

The truth is that the culture war defines American politics and always has. Whether it's characterized as country vs. city or North vs. South or conservative vs. liberal, our culture is always at war with itself. It's foolish to ever believe that conservatives are going to stop being conservative or liberals are going to stop being liberals. Our political identities are as much about our cultural and social affinities as they are about our philosophies of government. (In fact, our philosophies of government are almost entirely informed by our social and cultural identities.) And liberals should be fine with that. The culture war may be a very long one, but over time, they are winning. In America progress always wins in the long run. But it's never easy. And it ain't over til it's over.