"The Mindy Project" can't end without these 5 scenes

Updated: Fox has chosen not to renew the show, but it could get a second life at Hulu 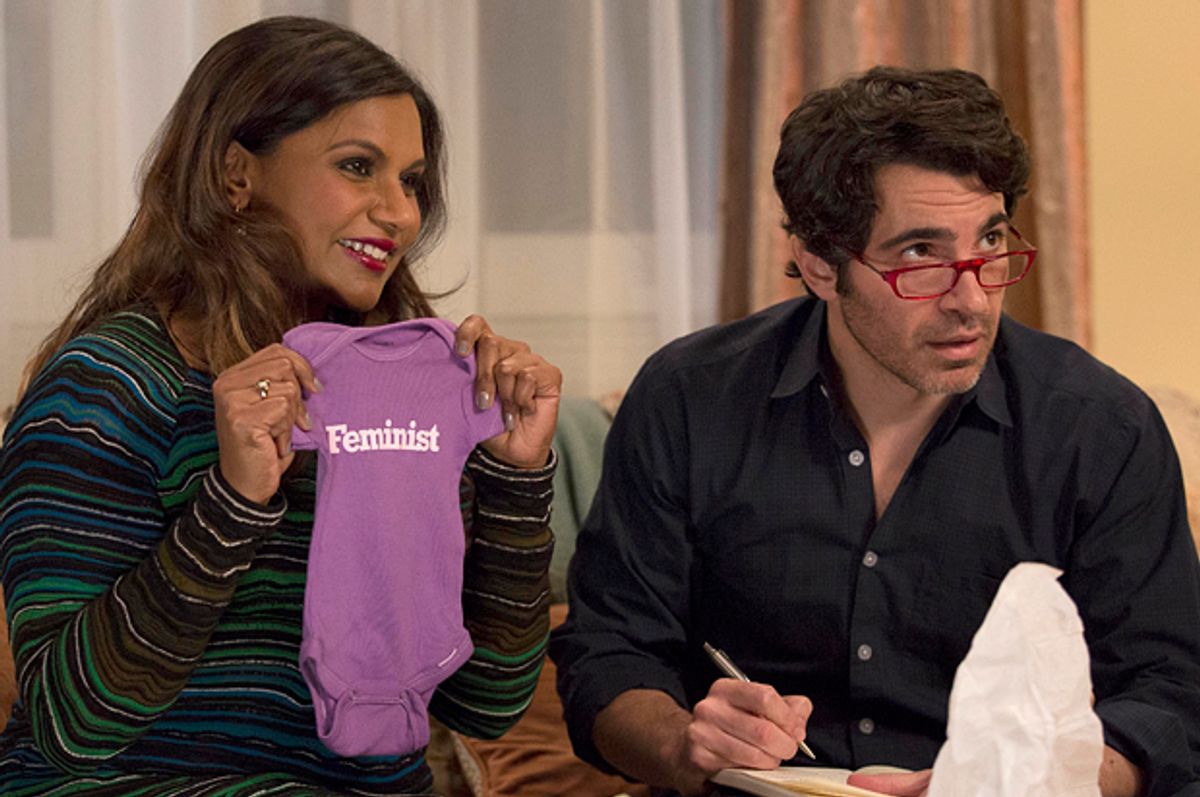 This post originally ran in March, after the "Mindy Project" season finale, but it has been updated and re-published in light of Fox's decision not to renew the show for a fourth season.

It was announced yesterday that "The Mindy Project" had not been renewed by Fox for a fourth season, although there is a chance that the streaming site Hulu -- which already owns the streaming rights to the show -- will swoop in to the rescue, much like Yahoo did for "Community" after it was axed from NBC.

We seriously hope that Hulu comes through, because "The Mindy Project"’s third season did not give fans the closure they deserve. Rather, season three ended on a cliffhanger, with Danny and Mindy re-evaluating the state of their relationship as Mindy approaches her due date, and Danny heading to India to meet Mindy’s parents for the first time.

It was the perfect ending to a pretty solid season -- but we really hope it isn't the ending for the series as a whole. Here's why we really need Hulu to take the plunge and give the show another chance:

That cliffhanger!
Last night’s episode ended with Danny arriving in India, somebody -- presumably one of Mindy's parents -- opening a door, and Danny saying, in his inimitable heartfelt, bound-to-make-you-tear-up way, “Hi, I'm Danny Castellano, and I'm in love with your daughter.” This is not an okay way to end the show. First off, we really need to know who’s behind that door, and I really want to see how our favorite Staten Islander fares in Mumbai (that sweaty rickshaw scene was a taste, but not nearly enough). And finally, that simply can’t be the last thing we hear Danny say. Danny and Mindy are one of the great sitcom romances of our time, and they are deserving of a more satisfying conclusion to their love story. This is a sweet place to pause on, but it sure as hell doesn’t feel final.

Meeting Mindy's parents:
As I wrote a few months ago, it’s long past time we met Mindy’s parents: that "intelligently deploying Mindy’s parents could be a huge moment both for her character and for the show." In fact, their absence has become so conspicuous over the course of the season, and so discussed by critics online, that it almost became a joke in the season finale — Danny missed them in Boston, Mindy slammed down the computer before their Skype call, and finally, the show cut to black when Danny arrived at their door in India. For the show to end without getting a chance to meet Mr. and Mrs. Lahiri would be a crying shame — and, judging by the boon Anette Castellano has been for the show, not to mention "Mindy"'s generally deft guest-casting — a ripe breeding ground for comedy.

Mindy and Danny as parents:
Pregnancy storylines tend to be pretty boring, and I found myself tiring of the repetitive plotlines in these past few episodes (Mindy feels fat! Mindy vomits into hats! etc). But in terms of narrative, parenting is a whole other story. Mindy and Danny are both such weirdos with such specific (and contradictory) idiosyncrasies and hangups, that I'm dying to see them trying to impart their selective wisdoms to a youngster, who is bound to be torn between Mindy's inevitable "I'm a cool mom" shtick and Danny's nervous helicopter parenting, not to mention whatever mischief Uncle Morgan cooks up.

The fairytale wedding:
While not all love stories have to end in a wedding, from everything we know about Mindy Lahiri — and this was confirmed in last night’s episode — she has always envisioned a fairytale ending to her great romance. And based on how the show has always played on rom com conventions, it would be a crying shame not to make use of the greatest romantic comedy staple of all: The wedding. We, much like Mindy herself, won't be satisfied until our heroine walks down the aisle -- nor do we wish to be deprived as the mishaps, pageantry and synchronized dancing such an occasion is bound to entail.

Untapped potential:
"Mindy" remains one of the funniest comedies on TV; but, as Alan Sepinwall points out on HitFix, it still struggles to find its groove in some areas, particularly when it comes to its supporting cast. Yet there's so much raw potential there; if it gets renewed (or, Sepinwall suggests, gets picked up by a streaming service), we're optimistic that the show will be able to iron out the kinks and focus on what it does best. As he suggests: "One advantage might be an excuse to pare the cast down to the essentials of Mindy, Danny and Morgan, and just keep rotating in guest stars, which the show has always done better by (case in point: Laura Dern as the cheerfully rude Eastern European OB/GYN, or the return of four of Mindy's exes) than many of its ongoing characters." And beyond Mindy's parents, there are still so many great guest stars we still want to see. It would be rude to put a Cookie Lyon reference in the finale and not invite Taraji P. in for a cameo, right?