"The most interesting election" in generations: A primer on today's big UK vote 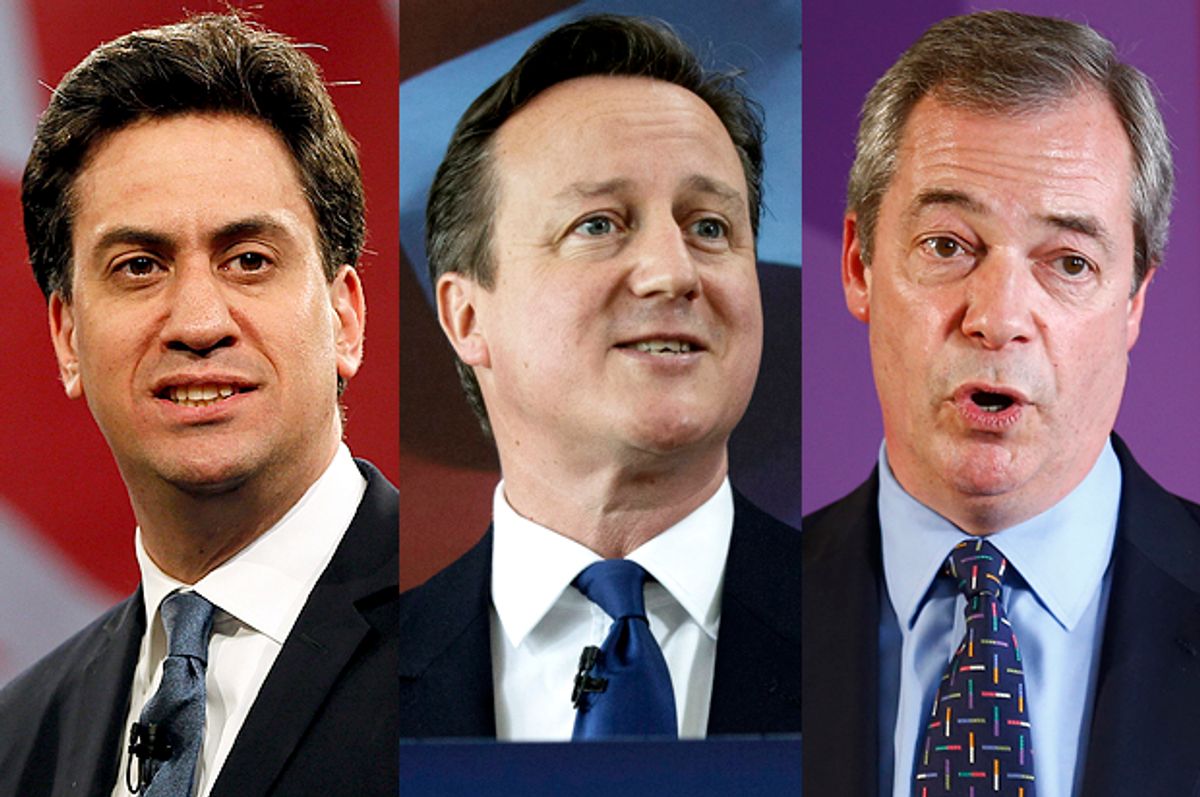 America has a very odd relationship with the United Kingdom. How odd? Consider two recent stories coming out of the UK, and ask yourself which you've seen covered more in the mainstream U.S. press.

The first story is the birth of the new "royal baby," Princess Charlotte Elizabeth Diana of Cambridge. The second story is the general Parliamentary election, the UK's first since 2010. In a country ostensibly founded in order to break free from the yoke of monarchy, guess which one the media has focused on more: the story about a figurehead couple's new child, or the one about who will be the next leader of what remains one of the most fearsome economic and military powers in the world?

Unless you read a recent Gawker primer on the election by the British journalist Libby Watson, the story that's freshest in your mind is almost certainly the one about the elaborately named baby. To be clear, that's not your fault; and babies are all well and good. But in the interest of closing the gap — however little — Salon decided to reach out to Watson (full disclosure: she's a friend) to discuss the election, which she describes as the most interesting one she's experienced thus far in her life.

Below, you can find our conversation, which has been edited for clarity and length. Or you could just click over to look at more pictures of the royal baby. This is America, after all: it's totally up to you.

My first question is a little tongue-in-cheek, but in the spirit of one of the sillier clichés of U.S. politics: Is this the most important election of your lifetime?

Even if it’s not the most important, it’s the most interesting. I can’t remember any election that has been this close or this undecided this close to election night. The election is [imminent] and we still have no idea what the next government is going to look like. There are a lot of scenarios being batted around, but we still don’t really know. Maybe the 1997 Labour victory was more important, the Labour realignment, but this is definitely more interesting election of my lifetime.

To set the stage a bit: What do you think is the general estimation of the coalition government’s performance?

I think it’s been pretty much a disaster — just in terms of the coalition itself, it hasn’t worked out the way that Lib Dems want it to. If they’ve managed to soften the Tory austerity policy a bit, it’s not in any way that’s been very visible. It’s not really public at this point. So any backroom negotiations that they did to soften any of those policies, we didn’t know about that. The main thing that that the Lib Dems are known for is just being weak, being Cameron’s lapdogs, and for reneging on the tuition fee promise that they made during the last campaign.

What about as far as the Conservatives and Cameron are concerned?

Cameron’s government has been pretty bad for most people. The austerity policies have been pretty hard, and have hit the poor areas the hardest. I don’t think there’s anyone who thinks this has gone really well, or that this has been a really good few years. I’m sure there are people who think maybe it would be worse [under Labour], and those are the people who are voting Tories, but I really don’t think anyone has thought that Cameron has done a bang-up job.

As a lefty, I don’t support the Tories’ agenda, but I understand it. Labour, though — when I read their campaign platform or listen to Miliband, it’s not really clear to me what they’re really about. They just seem like the Not-Conservative party in some ways. Is that how it feels to left-of-center people in the UK?

Labour is kind of an alternative, but people aren’t inspired by Labour. No one apart from those teenage girls has a poster of Ed Miliband on the wall; he isn’t the guy who’s going to lead us to glory. He’s not an Obama figure by any stretch. He’s the guy that happens to be [running] Labour at the time that the Cameron government is kind of falling apart.

About those wayward teens: It seems like there are two, mutually exclusive narratives about Miliband. The more common one is that he’s odd and awkward and unintentionally funny. The other is that he’s a hearthrob. What gives?

That whole Milifandom thing with the teenagers girls is very strange. I don’t know where that’s coming from. The cynic in me wants to think that David Axelrod has something to do with that, because he’s been working with Labour.

You’re right, it’s not really coming from anything real — obviously, he’s not cute. But he’s been pilloried in the media for the past few years. He got caught eating a bacon sandwich and he looked bad doing it. All these weird things where he looks weird and awkward. So I guess the teenage girl, Milifandom thing has come out of this, Oh, bless him, isn’t he sweet.

I think also it’s just ironic; people are just being ironic about it. I think that may be just a British thing, ironically saying he’s adorable when he isn’t.

The rightwing tabloids have taken to calling him “Red Ed,” but Labour shifted to the right under Blair, just like the Democrats did under Clinton (arguably even more so, in fact). How leftwing do you think Miliband is, really?

When he was elected, he beat his brother David Miliband, who was more of a Blairite and more of a centrist. A lot of people were surprised, everyone expected David Miliband to get it. Ed mounted a pretty strong campaign and just squeaked past David. I know lefties were really pleased. He was the candidate of the left-wing of the Labour Party.

Obviously, compared to American politics, he’s further left on the scale; everybody [in UK politics] is a few spots leftward on the spectrum. Miliband is to the left of Obama or Hillary Clinton — maybe even Elizabeth Warren.

Let’s get to the real star here: UKIP’s Nigel Farage. You noted in your Gawker piece how UKIP was a rough analog of the Tea Party; but does American politics have an individual figure who’s like Farage?

On a national level, no. I honestly can’t think of anyone as fully ridiculous as he is. He is Ben Carson-ridiculous or Michele Bachmann-ridiculous. It’s just embarrassing that he is a player in national policy. I guess Louie Gohmert [might be equivalent]; he’s kind of at the Louie Gohmert intelligence level, but his rhetoric … is more, I’m just like you. He always does interviews in the pub and stuff like that.

And UKIP’s raison d’etre is getting out of the E.U. and curtailing immigration, right?

Yeah, when they were founded in the ‘90s, getting out of the E.U. was their whole thing. But they have kind of drifted towards also being very focused on immigration, because that’s also probably some of the most tangible effects of E.U. membership that British people experience everyday in their lives, is European immigrants working in the U.K. I guess they identify that as the biggest scourge in Britain.

It’s a weird mix of politics like the Tea Party. It doesn’t know whether it’s conservative or libertarian, sort of populist. They want really strict border control, so it’s not fully economic liberalism; it’s like protectionism. The thing is, they’re not just concerned about the economic impacts of immigration. They’re also very worried about immigrants impact on U.K. culture.

It sounds like they appeal to the UK’s equivalent of Pat Buchanan voters in the U.S.

Yeah, pretty much. Farage is like Pat Buchanan, but weirdly more likeable. People see Farage as a good, normal bloke they can have a conversation with.

One of the big questions of the campaign has been what Labour will do about the Scottish National Party, which is pro-Scottish independence and has become quite popular since last year’s failed referendum. They’re leftwing in most ways so they seem like they’d be the natural ally for Labour, if Labour was able to form a government. But Miliband has promised not to ally with them. Why?

Yes, Labour has said firmly many times, We’re not going to go into a coalition with SNP. Because Cameron and other parties have been frantically trying to paint this terrifying picture of England run by the Scots and it’s kind of — I don’t know if the word is xenophobic, since Scotland is part of the country, but it’s very anti-Scottish. It’s a weird message that they’ve got, like, Do you want the Scots running things?

Labour’s had to say, No, no, don’t be silly. Of course we’re not going to go into coalition with the SNP. But I just don’t buy that at all. If Labour wants to be in government, they basically have no other route than the SNP, because the SNP is just going to wipe them out in Scotland. So to get the MPs they would need to form a coalition, they would basically have to go with SNP; the other small parties are not big enough.