70 years after the end of WWII, the West is unwilling to celebrate the holiday in Russia 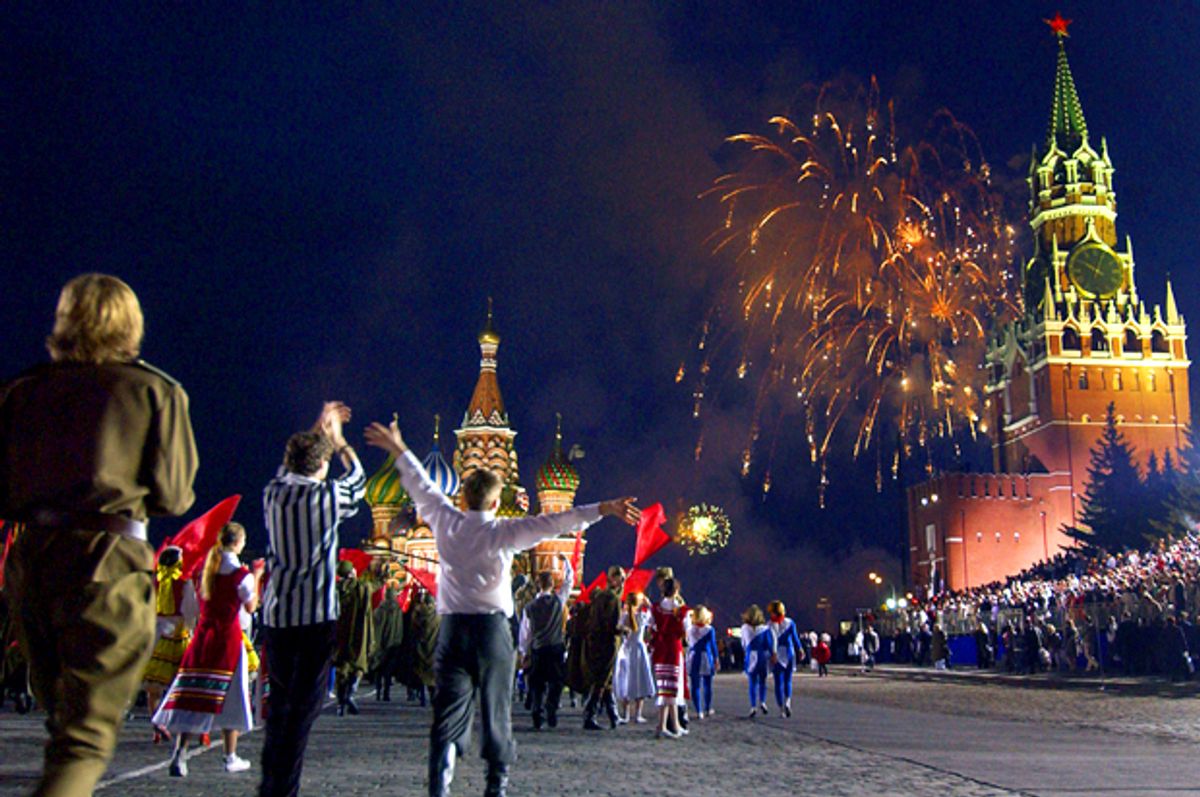 People celebrate as fireworks explode over the Kremlin to mark the 60th anniversary of the Allies' victory over Nazi Germany near the Red Square in Moscow, May 9, 2005. (AP)
--

On May 9 Russia celebrates the 70th anniversary of the end of World War II, the most lethal conflict in global history. Yet this year no statesman from the victorious Western Allies – Britain, France and the U.S. – has agreed to join in the celebrations in Moscow’s Red Square; instead the presidents of China and Venezuela will attend. This breakdown of the anti-Fascist coalition is a direct reflection of political alliances and personalities today in a world threatened with renewed rift and, indeed, war in Eastern Europe. And on the face of it, Western leaders’ boycott of the Moscow parade makes perfect sense as a rebuke to Vladimir Putin’s militant actions toward Ukraine. However, the West's unwillingness to celebrate the holiday in Russia reflects deeper a historical misremembrance – one that is feeding the current conflict.

The Soviet Union did more than any other country to defeat Nazi Germany. During the war, this was common knowledge across Europe. Ordinary Britons crowded in pubs to hear the latest broadcast about Stalingrad’s heroic resistance against the besieging German attackers, recognizing that this epically brutal confrontation would determine the outcome of the war in the East, and with it the entire conflict. Many Europeans celebrated every victory of the Red Army in their diaries. Even Poles -- rightly fearful of how Soviet liberation would impinge on their restored sovereignty -- welcomed the Red Army in the wake of the terrifying German occupation. But the subsequent Cold War division of Europe erased this knowledge among the Western allies. Over the decades a new consensus formed that a Soviet liberation had in fact never taken place, or, if it had, it was of secondary significance to the way the war ended. According to a French poll conducted in 2004, 57 percent of the respondents believed that the United States had been the decisive power in the victory over Nazi Germany, versus 20 percent who said that this role belonged to the Soviet Union. A similar poll conducted in May 1945 had produced almost the same numbers, but in reverse.

Since the opening of the Soviet archives in 1991, Western scholars have been able to study the Soviet war effort more closely than before. Newly rediscovered sources show the Soviet total war effort to have been unique in the context of other European war cultures – brought about with a great deal of violence and summary executions, but primarily achieved by genuine mass sacrifice, devotion to Communism, and to the idea of the homeland. Without the heroic effort of Soviet citizens, we would surely live in a very different world today.

A staggering 27 million Soviet citizens died, about 15 percent of the population, and about a third of the total global casualties of the war. By contrast, Britain, France and the U.S. combined suffered 1.5 million war deaths. In the Soviet Union the dead included Jews, Communists, partisans and innumerable others who displeased the occupants or died of their neglect; they were ethnic Russians, Ukrainians, Belorussians, and included scores of Central Asian soldiers as well. In Russia today you will not find a family that cannot point to a relative lost during the war. For this reason the commemoration of the war’s end goes very deep, much deeper than the official parade on Red Square might make it appear. The holiday is a living tradition – passed down the generations. On my travels through Russia and Ukraine last year, many people told me that May 9 for them was a sacred day, on a par with Orthodox Easter. It is a holiday commemoration that celebrates great national pride, and mourns the catastrophic losses.

These immense losses may explain the particular relationship Russians have with their recent past. The history of the "Great Patriotic War," as they call it, is filled with pathos and significance.  You find traces of this in nearly every Russian city, town and village: from outsize war museums that draw steady crowds of visitors, to fresh flowers bedecking the mass graves of unidentified soldiers and civilians, to the extraordinary veneration with which younger generations treat the war’s surviving veterans.Unsurprisingly, the memory of the war pervades the speeches of political leaders. No politician can afford not to acknowledge it. It would be as egregious and politically foolhardy as an American president failing to acknowledge the Armed Services on Memorial Day.

Today many Russians feel that much of the world wants to rewrite this most significant day in their modern history: Poles and Ukrainians, in particular, have reverted to depicting Russia as their historical oppressor, and they seek to erase from the record the Soviet liberation in 1945. Russians feel wronged and deceived. If we want to overcome the isolation of Russia today and break the stalemate in Eastern Europe, dialogue is key. Such dialogue will bear fruit only when it takes into account the sensitivities of the other side. Acknowledging Russia’s losses in World War II and its role in defeating fascism is an essential first step.

When Britain survived its own siege – by the Luftwaffe – in 1941 Winston Churchill expressed his feeling to Parliament: “A year ago our position looked forlorn, and well-nigh desperate, to all eyes but our own. Today we may say aloud before an awe-struck world, 'We are still masters of our fate. We still are captain of our souls.”  But the journey from 1941 to 1945 was long and hard, and it was the Soviet Army that ultimately determined that the West would remain “captain of its soul” and not be forced to use on European soil the terrible weapons that finished the war in the Pacific. Instead it was the blood and sweat of Stalin’s armies that brought Hitler’s regime to ruin, and that history is too important for us to forget or deny.

Jochen Hellbeck is a professor of history at Rutgers University and the author of "Stalingrad: The City That Defeated the Third Reich."