Beyond "Montage of Heck": 10 rock documentaries that get much darker than "Behind the Music"

From the Rolling Stones Altamont concert to the fall of Quiet Riot, rock's true stories are stranger than fiction 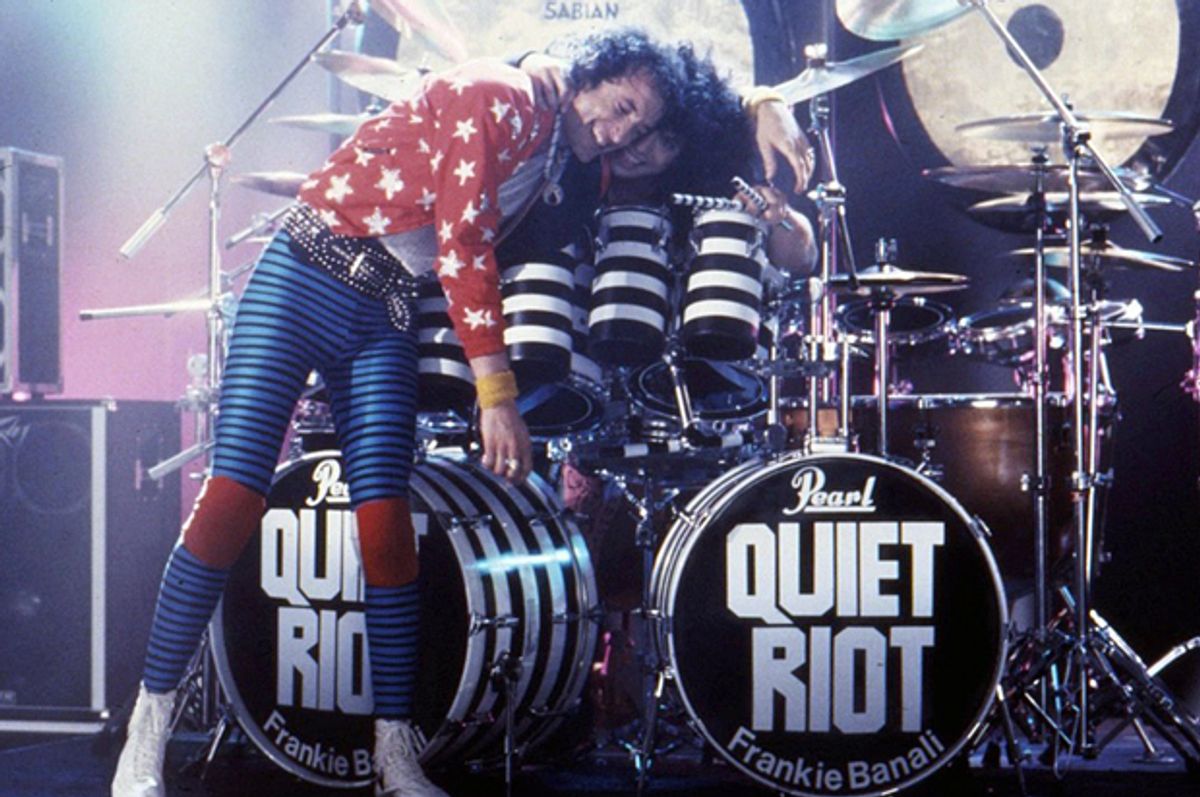 If the new Kurt Cobain documentary "Montage of Heck" whetted your appetite for more inside-rock stories that don't end happily ever after, there's no shortage of the genre to sink into. Darkness in rock documentaries comes in various forms, from managers squandering an artist's hard-earned millions, to lives and dreams shattered by crippling addictions, to once wildly successful metal bands trying to carry on with singers better suited to front a Foghat cover band. The following rock docs have a little from columns A, B and C, and so much more darkness where that came from.

David and Albert Maysles were just looking to document the Rolling Stones’ 1969 U.S. tour. They ended up hitting the cinéma vérité jackpot at the band’s free show at Altamont Speedway, where the Hells Angels, hired to do security, turned what was merely a complete clusterfuck into a tragedy with the stabbing death of 18-year-old Meredith Hunter, which was caught on film. Watching the Angel’s knife come down on Hunter is grim. Hearing Hells Angels mouthpiece Sonny Barger in a radio interview the next day trying to defend his brethren’s actions will haunt you.

Time plus dumbassery does not equal comedy in the case of this film documenting L.A.'s thriving '80s metal scene. W.A.S.P.'s drunken guitarist showering himself with and guzzling vodka in a pool as his mom looks on, Paul Stanley pontificating on his stardom in a bed full of women, and all the brain-dead sexists and careerists profiled here seem even more gross with time. And Ozzy Osbourne battling the shakes as he attempts to make breakfast seems even sadder. In case you young heads are wondering, no, Ozzy’s never really had it together.

A small sampling of the things you can’t unsee in this grainy 1993 doc about the scum-core punk anarchist GG Allin, directed by then-NYU film student Todd Phillips: Allin defecating onstage; Allin throwing up as woman urinates in his mouth; Allin attacking a female audience member; Allin’s flaccid penis — a member so minuscule, it makes the baby on the cover of "Nevermind" look like Dirk Diggler. There’s also a testimonial from fan/serial killer John Wayne Gacy. All that notwithstanding, the most shocking scene of all might be Allin’s sincere and moving acoustic version of Warren Zevon’s “Carmelita.”

Ah, Norway. The land of fjords, the Northern Lights and black metal bands that make King Diamond and Cradle of Filth seem like posers. "Until the Light Takes Us" attempts to demystify that scene by profiling some of the major players — one of whom murdered another — and examining the rash of 1990s church burnings associated with the scene’s supposed satanic leanings. And if you think that’s bleak, wait until you see the post-suicide photo of Mayhem singer Dead that ended up as an album cover.

Back in the '80s, Anvil was poised to break big, with a rep as one of the most powerful metal bands on the planet, and famous fans like Slash, Lars Ulrich and Lemmy. Circa 2006, they’re still convinced that big break is coming, and they’re working day jobs, taking out second mortgages, borrowing money from family and undertaking soul-crushing tours of Europe booked by the guitarist’s girlfriend (those always end well) to make it happen. This leads to a lot of strife and nearly tears apart founding members and childhood friends Steve “Lips” Kudlow and Robb Reiner. But (spoiler alert) all that hard work — not to mention a heightened profile thanks to this award-winning documentary — finally pays off.

Though there’s a happy ending to this documentary about former Hole drummer Patty Schemel, it’s mostly dark days turning into dark years here, including the crack addiction that left her homeless, deaths of friends and bandmates, and — perhaps toughest to stomach of all — her being replaced by Bad English and Journey drummer Deen Castronovo during the "Celebrity Skin" sessions. Just the kind of Punk Fucking Rock move you'd expect from Courtney Love.

When a documentary begins with the 50-something singer of a shoulda-coulda-woulda doom metal band smoking crack in his parents’ basement and nursing the gross flesh wounds on his arms, you would assume things could only get better from there. Eventually they do for Pentagram singer Bobby Liebling, who is the subject of this doc, with the help of a superfan-turned-de facto manager. There are just some seriously dire bumps in the road along the way, like a restraining order violation, jail and relapse.

The A.M. gold songs created by the Cowsills, the real-life late-'60s family band that served as the prototype for The Partridge Family, couldn’t have been any sunnier. "The Cowsills Story" shows that what was going on behind the scenes couldn’t have been much darker. Father/manager Bud Cowsill is depicted as a certifiable horror show, accused of physical, mental and sexual abuse, along with gross financial mismanagement that left the band penniless despite selling millions of records.

The Ginger Baker we get in "Beware of Mr. Baker" is a far cry from the force of nature on the drums he was as a younger man. On his best days, Cream's former drummer is merely a lonely old crank isolated in his South African home. At his worst, he's a complete loon, prone to violent mood swings (he jabs filmmaker Jay Bulger in the face with his cane when he doesn't like a particular line of questioning) and delusion. That he’s still here to be the subject of a documentary given his onetime lust for chemicals (documented here) is pretty amazing.

Imagine Todd Solondz directing a reboot of "This Is Spinal Tap" and you’ve got an idea of what this doc detailing the rise and fall of Quiet Riot is all about. The second half of the film revolves around drummer Frankie Banali’s humbling quest to keep the band going. Banalli hires a middle-aged house painter to replace late frontman Kevin DuBrow, and then sacks the guy because he can’t remember the words to “Bang Your Head (Metal Health).” He then hires a Las Vegas soccer dad, who’s also gone by film’s end. "Cum on Feel the Pain" would’ve been a better title.