"Please S**t On My Dreams": The completely insane song at the end of the "Louie" nightmare episode 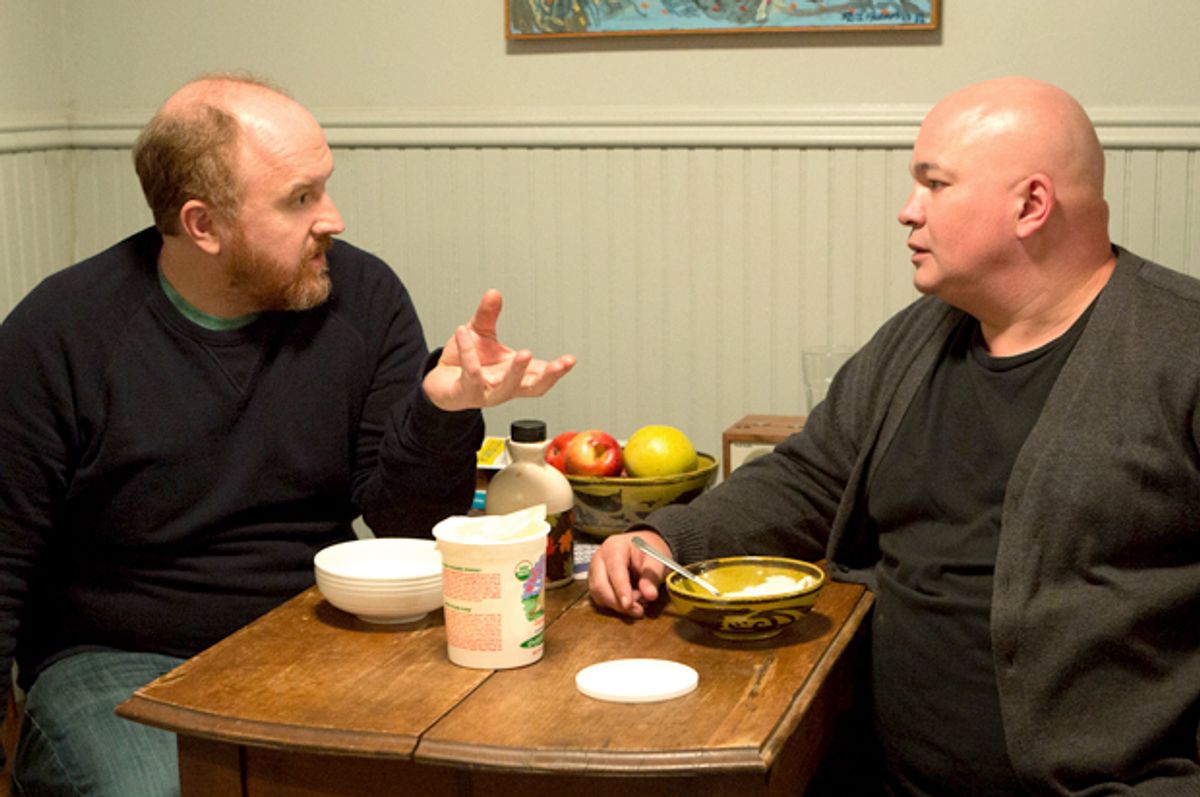 Updated: We now know the full credits of the song that plays during last night's closing. See below for the full details.

Louie can't sleep. Or rather, he can, but only until he wakes up screaming when a semi-naked pale creature with dead beady eyes and a hunger for flesh (he's kind of a terrifying amalgamation of Gollum, Voldemort and the Ally McBeal dancing baby) leaps out of the darkness to devour him (or lick him menacingly, at least). Is it a shadow-Louie? A manifestation of his fear of death? Who knows? The ghoul's real purpose is never nailed down, thankfully. He's everything in Louie's subconscious, all at once — a giant hungry man-baby who can be blinked out of existence with the flick of an eyelid.

Louie's doctor assures him that dreams don't mean anything, they're just the brain's way of sorting through recent events, deciding what's important to keep and what can be shoved down the subconscious garbage chute — right before the voracious skin-chewer pops up on the side of doc's desk, and takes his requisite leap onto Louie, who then wakes up shouting, as he does every night in this episode.

Dreams on TV can often serve an overly-narrative function — full of wish-fulfillment or weirdly realistic fear-realization — that they really don't in real life. So in "Louie," of course, the dreams are just as mundane (and terrifying) as Louie's real life. One of his buddies steals his joke, and then laughs about it — and later in a dream does the same thing with his coat. He has to go on stage naked from the waist down, with nothing but a mangled swirl where his genitals would be. The female host is visibly disgusted, the crowd restless and unimpressed. When he gets to the mic, he can't form proper words. He's grunting at the audience, trying to form language around a thick, tangled tongue. He humps a guy wearing a (terrifying) bunny costume head. He has an unintelligible conversation with his brother.

Maybe the nightmares are guilt-induced — early in the episode, when Louie picks Lilly up from a sleepover, her friend's mom asks him for help moving a giant aquarium into another room, a task that she can't really handle on her own. Her husband has left, the fishtank likely reminds her of him and of the help running a household she no longer has, she starts crying, but Louie points out that it's not a simple task to move a big aquarium, and he leaves without helping. After a heart-to-heart with buddy Nick DiPaolo, near the end of the episode, he heads back to her apartment and moves the tank for her, emptying out the water, carefully transporting the fish, and generally saving the day on a very small chore that meant a great deal to this woman. And he doesn't stop there — he fixes the toilet, he changes a high lightbulb, he even screws her on the kitchen counter just for good measure. The nightmares stop — the credits roll as Louie enjoys a blissful uninterrupted night.

Oh, but the song playing over the ending scene and credits — in an episode full of bizarre non-sequitur dream scenes and a sunny resolution full of kitchen sex and minor household chores, "Please Shit on My Dreams," the original song that closes out Louie's long nightmare-fueled nightmare, is equally bizarre. Set to a jaunty, retro tune reminiscent of Doris Day's performance of "Que Sera Sera," we're treated to the following nightmare puzzle lyrics that have already sparked an obsessive Reddit thread:

So, who's the winsome voice behind this batshit lullaby? Turns out it's Giselle Bellas, the opera singer who also sang the song that played during the cheese-grating restaurant scene in "A la Carte." Louis C.K. himself wrote the lyrics (of course!), with darling retro music behind the cynical wail of despair disguised as a sweet ode to "my dreams" composed by Matt Kilmer and SweetPro.

Why, oh why, do we now have a tune about dying babies covered in our own diarrhea stuck in our heads? Will we ever look at a baby crawling on the floor the same way again? In the nightmare hellscape of our subconsciouses, monsters lurk everywhere. Have fun sleeping tonight!