Juan Williams: Pam Geller is no better than your average self-promoting pyromaniac 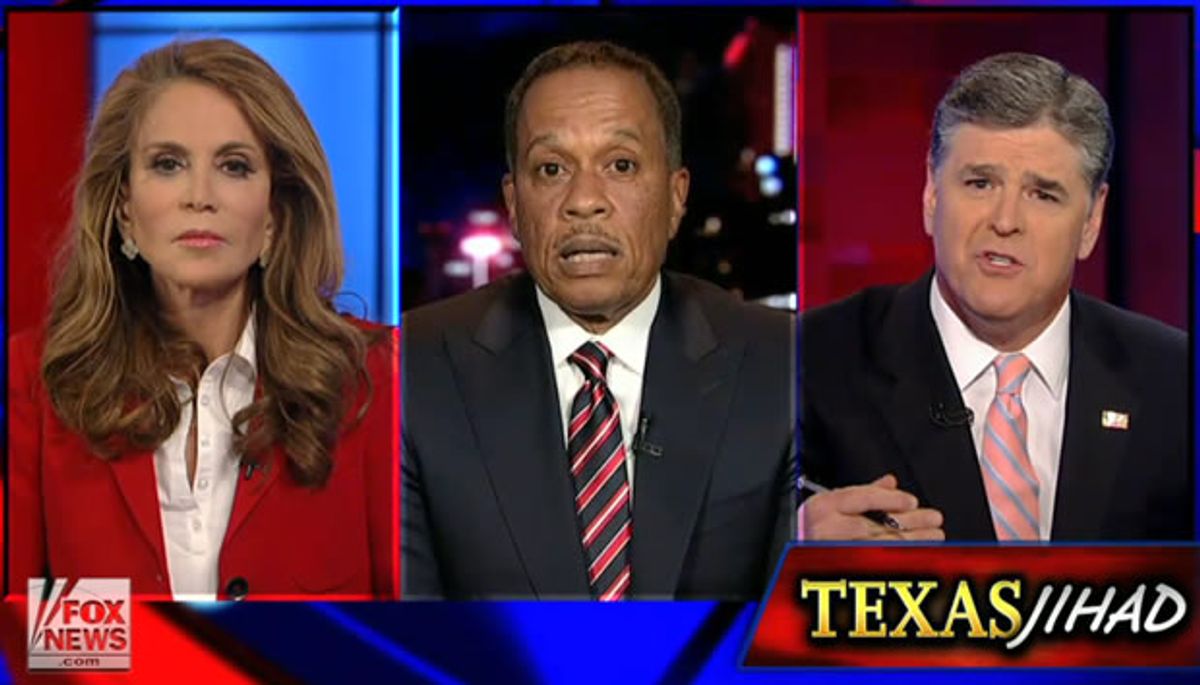 On "Hannity" last night, Juan Williams unloaded on anti-Muslim activist Pam Geller, comparing her to a pyromaniac who walks before a judge and insists she only burns down buildings to see how quickly the fire department responds.

Geller sat stone-faced as Williams leveled this accusation, preferring to let Sean Hannity speak in her defense -- and speak he did. "You're taking the 'she dressed provocatively, therefore she put herself in the position [to be raped] position," he said. "You're blaming the victim of an attempted assassination!"

"No, I'm not," Williams replied, explaining that unlike editorial cartoonist Molly Norris and author Salman Rushdie -- who were producing actual works of art that offended radical Muslims -- Geller was "intentionally trying to provoke this [violent] reaction" by hosting an amateur contest with no greater purpose than to offend.

"But she was a political cartoonist," Williams interjected.

"I did not interrupt your ridiculous remarks -- you're going to let me speak, sir," Geller replied. "You know what's incendiary?" she asked, before becoming uncomfortably literal. "The Jordanian pilot who was set on fire. That is incendiary. The idea that I'm provocative? No. Murdering cartoonists is provocative."

She complained about the fact that her motives have been questioned by the media -- and claimed that criticisms of her are emboldening the jihadists. "Not the jihadists motives!" she said. "My motives! For ten years after 9/11, I've been opposing Sharia and jihad. It's the media that's created these myths against me."

Hannity jumped in and said that the real problem is how easily offended Islamic extremists are, and that it's "naive for people on the left to think that you can stop them."

"What are you talking about?" Williams shot back. "Pamela was talking a few moments ago about [them] burning a pilot. The pilot was fighting a war. Those people acted in a barbaric fashion, but they were fighting a war."

Geller tried to talk over Williams, saying that he's "promoting Sharia," but Williams would have none of it. "I think you are about self-promotion, Pam Geller, not about the cause of free speech!"