From Sarah Palin to Bill O'Reilly, Letterman has a history of rubbing people the wrong way — UPDATED 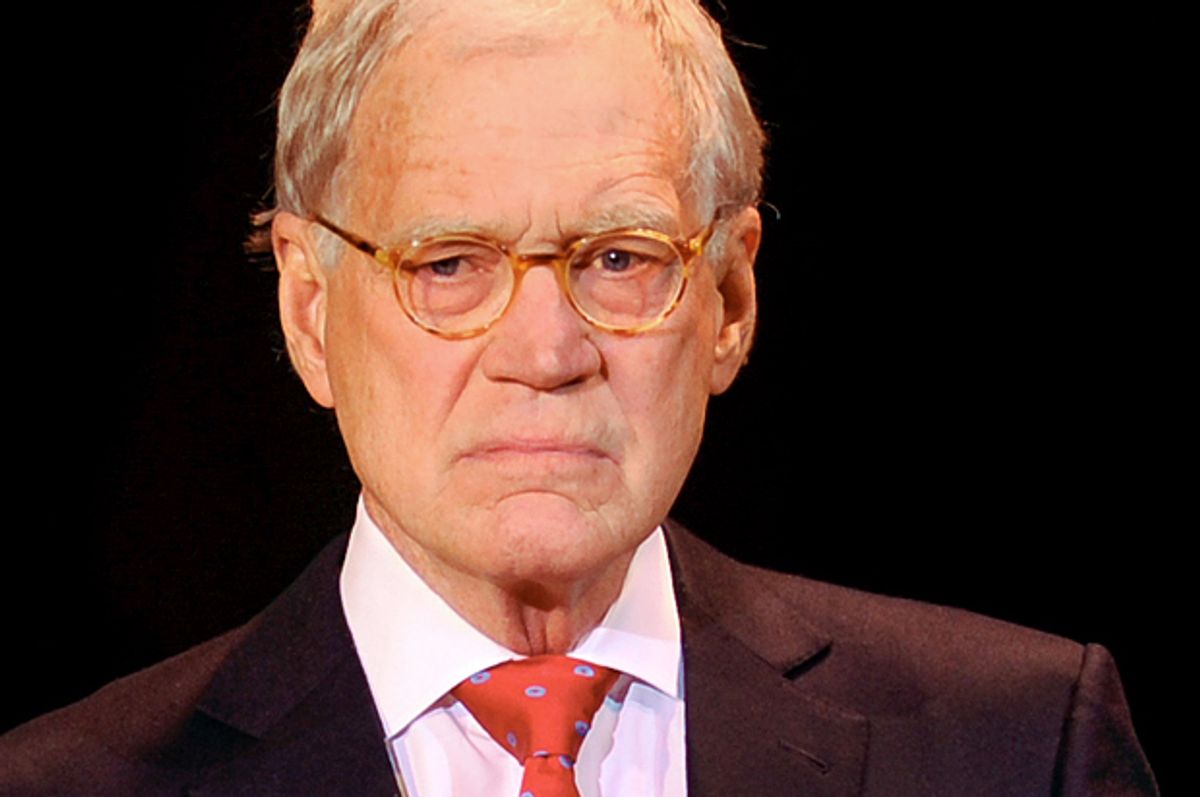 While there are some guests Letterman loves, there have also been plenty of people in his chair who rub him the wrong way. The "Late Show" host is notoriously cantankerous, and he’s had his share of spats and squabbles over the years -- some short-lived, and some which raged much longer than they should have. Sometimes it’s mostly the guest’s fault, but more often it’s a result of his desire to stir the pot, and to declare publicly — and with an impish grin — that a feud is on. Here’s a look back at 8 of his biggest spats over the years.

Letterman got in hot water after making an off color joke about Sarah Palin’s daughter back in 2009 (if you’re wondering, here’s the joke: “Sarah Palin went to a Yankees game yesterday. There was one awkward moment during the seventh-inning stretch: her daughter was knocked up by Alex Rodriguez.”)

Pretty standard off-color Letterman stuff, only it turns out that while Letterman claimed to be referring to Palin’s 18-year-old daughter Bristol, the daughter that actually accompanied Palin to the Yankees game was 14-year-old Willow. Palin supporters chastised Letterman for seemingly making light of the sexual abuse of an underage girl, while a protest to fire Letterman gathered outside the studio. Palin herself slammed Letterman, saying “laughter incited by sexually-perverted comments made by a 62-year-old male celebrity aimed at a 14-year-old girl is not only disgusting, but it reminds us some Hollywood/N.Y. entertainers have a long way to go in understanding what the rest of America understands -- that acceptance of inappropriate sexual comments about an underage girl, who could be anyone's daughter, contributes to the atrociously high rate of sexual exploitation of minors by older men who use and abuse others.” Letterman eventually apologized not once but twice, after acknowledging his first apology was not genuine.

During her infamous "Late Show" appearance in 1994, a hostile Madonna said the F-word 13 times, smoked a cigar on set, refused to leave, and even offered Dave her underwear to sniff. It certainly seemed like a hostile encounter, but later she said that Dave and producers egged her on. On Valentine’s Day the following year, Madonna showed up with a bouquet of flowers and said “I am a changed man since I met you… I no longer say the word ’f—’ anymore.” She has appeared on the show since, and there’s always plenty of lovable sparring — but never quite as many F-bombs.

Letterman instigated a famous beef with Senator John McCain after he canceled an appearance on the show back in 2008. McCain claimed he had to go back to DC, but then stayed in New York to do an interview with Katie Couric. Over the next few weeks, Letterman showed McCain no mercy, hammering the GOP candidate with snarky barbs ( "Now he doesn't seem to be racing back to the airport, does he? I wonder if he'll mention me. Hey, John! I've got a question -- you need a ride to the airport?”) and even featuring him in a top ten list ("Top 10 Ways John McCain Can Turn It Around"). Eventually McCain appeared on the show to bury the hatchet. It was a little awkward.

Much like Jon Stewart and Bill O’Reilly (and, okay, most liberals and Bill O’Reilly) Letterman has long had a prickly relationship with the Fox news host. When O’Reilly came on the show back in 2006, the pair had a particularly heated back-and-forth, which ended with Letterman declaring "I have the feeling about 60 percent of what you say is crap.”

For a long time, nobody could pinpoint the origins of Oprah and Letterman’s infamous “16-year” feud, although Letterman certainly made a big deal about it, riffing on it constantly, taking potshots at her, and campaigning on-air to bring her on the show. For his part, Letterman attributed the beginning of the feud to a moment where he and his girlfriend skipped out on a bill and told the waiter Oprah would pay it, while many in the media pointed to Letterman's famously bad “Uma-Oprah” joke making fun of Oprah’s name that Letterman made at the 1995 Oscars.

Still, they were eventually able to move forward; in 2005, Oprah agreed to come on Letterman’s show. Her appearance was a ratings bonanza, and Letterman seemed delighted. "It means a great deal to me, and I'm just very happy you're here," he fawned. "You have meant something to the lives of people.” In 2015, they settled the feud again, with Letterman appearing on “Oprah’s next chapter” for a revealing, candid video. It was until then that Oprah explained the origins of the feud from her end, saying that her 1989 visit to his show “was a terrible experience” for her which involved Letterman ”baiting the audience” in a way that left her feeling very uncomfortable. Letterman apologized profusely and gave her a kiss on the hand. A happy ending!

The eccentric “Kids” writer was one of the few people to be banned from Letterman; Apparently Letterman found Korine rifling through Meryl Streep’s purse backstage after a 1998 appearance. Admittedly, the late '90s was a dark period for Korine, something he has himself admitted. When James Franco defended Korine years later while promoting “Spring Breakers,” Letterman said he would be “more than happy” to him back on now that he’s cleaned up his act.

In 1985, Letterman interrupted a taping of "The Today Show" with a bullhorn (through which he yelled “I’m not wearing pants!”) because he was annoyed that "Today" had gotten more NBC advertising than his anniversary show. Gumbel was not happy about the interjection, deeming it immature — even though it was reportedly cleared by “Today’s” EP — and refusing to speak to Letterman for years after. Letterman, unsurprisingly, continued to propagate the feud on his own show with barbs at Gumbel, while Gumbel dissed Letterman in the press. They finally patched things up a few years later when Gumbel finally agreed to come on his show.

Of course, Letterman’s most famous feud was with his rival late night host Jay Leno. The decades-long feud began when Leno outmaneuvered Letterman to succeed Johnny Carson on NBC’s tonight show back in 1992, followed with an intense ratings rivalry between NBC’s Leno and Letterman’s new show on CBS, and has raged ever since. While the pair are still prone to making snide remarks about one another, it seems the animosity has abated a bit over the years; in 2010 they appears in a Super Bowl commercial together (along with Oprah Winfrey) and both have publicly said that they made up, and even spoke on the phone once.