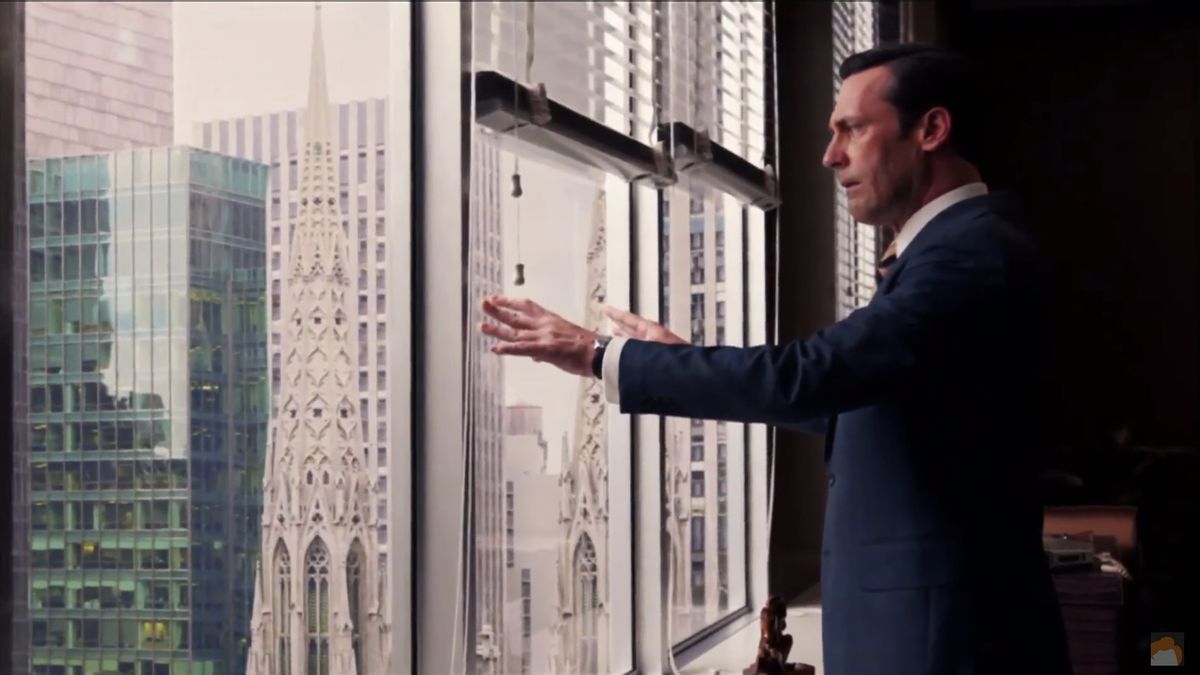 Last night, “Mad Men” creator Matthew Weiner appeared on “Late Night with Conan O’Brien” to share an exclusive preview of the show’s finale. The clip featured Don Draper gazing out the window off his skyscraper office — just as the credits foretold! — before a juicy watermelon, topped with a period-appropriate fedora, sailed out the window and landed with a splat on the Madison Avenue pavement.

And just like that, Weiner trolled us all once again.

While there was a moment where I thought Weiner might finally have finally bowed to fan pressure and decided to give us a glimpse behind the curtain, I should have known better. Secrecy and spoilerphobia are as integral to the show’s mythos as in-office bar carts, or Don staring blankly at stuff. But, as we reach the end off a seven-season run that has been shrouded in mystery and speculation, this tongue-in-cheek clip also revealed much more than simply the airspeed velocity of a laden melon. In a way, its opaqueness was uniquely revealing: A brash signifier of the show's unique relationship to viewing culture and Weiner’s historic unwillingness to capitulate to fan demands.

Over the years, the show’s symbolism-heavy mode of storytelling, coupled with Weiner’s reticence to discuss upcoming plot-points, has prompted extreme levels of fan speculation. Fans can't seem to believe that a show with such overwrought symbolism doesn't have some secret illuminati message we’re supposed to decipher amid the clinking martini glasses and curls of cigarette smoke. In the age of immersive television, fans increasingly view shows as puzzles for them to solve. As we saw with “True Detective”-mania, fans drove themselves insane looking for clues they found embedded in the show, combing through secondary materials and finding meaning in the tiniest of details (Woody Harrelson is the Yellow King because he is blonde!)

This is not Matt Weiner's way. Megan Draper as Sharon Tate? Nope? Don dying in a big plane crash? Double nope (as Weiner says, “Lionsgate would never pay for [it]”). If we had any doubts, Weiner’s appearance on Conan seemed to solidify that none of fans’ outrageous theories are going to come to pass. In particular, Weiner paid lip service to the D.B. Cooper theory making the rounds — namely, that Don Draper will turn out to be the infamous airplane hijacker — and hearing it come out of Weiner's mouth, it seemed bizarre (at least to my ears) that we could ever have thought a creator known for his subtle sleight of hand would ever pull a rabbit-out-a-hat move like that one. Likewise, the watermelon gag seemed to put to rest to the long-held prediction that the show would end with Draper plummeting to the ground. It would be too easy and too obvious.

At a recent talk at the Museum of Jewish Heritage that I attended, Weiner aptly summed up the show’s approach to storytelling with an anecdote that went something like this: On a normal show, a man might take a woman’s number and put it in his coat pocket, then lose the coat. At the end of the story, they would end up running into each other anyway. On “Mad Men,” the guy would lose the coat… and never see the woman again. Which is to say, Weiner is much more concerned with the un-flashy open-endedness of real life than he is with the cliffhangers and cathartic moments of closure that most storytelling relies on.

Yet — and I realize only a “Mad Men” viewer could read so much into a late night watermelon gag, but hear me out — this clip also illustrates what makes the experience of watching the show so much fun. It’s in the same spirit as the now-famous “next week on Mad Men” teasers, that reveal famously little about the plot of the upcoming episode. At first, people couldn’t wrap their heads around these darn things, but over time, it became apparent that Weiner was trolling us, deliberately trying to make them as obtuse as possible. As he told Vulture, he often steps in to make sure the promos reveal nothing about what’s to come, explaining he has “tied [the promotional team's] hands,”and “It’s really a tall order, which is, ‘Can you promote next week’s show? You cannot tell any story and you cannot show most of the interesting shots.’”

Much like dating, Weiner and his show have always played hard to get, and we love them more because they resist us. Weiner is -- to put it bluntly -- the showrunning equivalent of a tease. As he told Vulture, "I’m so glad people are enjoying it because when people are making fun of the show, it’s just as much fun to me as when they’re telling me they love it."

Nowadays, television is ever more interactive and responsive than it has ever been. In the age of internet recapping and live-tweeting, watching is not so much a unidirectional, hierarchical relationship as a reciprocal give-and-take. Online culture fuels this extra layer of fan speculation, that ends up sparking a voracious hunger for more insight, more knowledge, more influence — to which many show-runners can feel the need to respond. Creators change the trajectory of their shows based on fan response (like Will Forte, who hints he will make his “Last Man on Earth” character nicer next season) or Twitter outcry (like when “Vampire Diaries” creators added in a detail in response to fan prodding). Meanwhile, diehard book-readers fill in backstory for viewers and develop their own counter-narratives online (“Game of Thrones”) while spinoffs rise to fill fan demand and fuel nostalgia (like "Better Call Saul," which promises all manner of satisfying "Breaking Bad" cameos). On the Internet, there is an ever-more permeable boundary between viewer and creator.

Not so with “Mad Men,” though. Since the day he sent his ambitious, unconventional script to AMC, Weiner has always been 100 percent in control, committed to realizing a vision unimpeded by the desires of networks or viewers. And as he keeps reminding us: This is not a two-way street. Nobody liked Betty? Weiner did, and Betty stayed. Only seven episodes left? Hey viewers, meet Di the waitress! By never capitulating to fans, Weiner gave viewers something they didn't know they wanted: A mode of slow-burn storytelling that unfolds tantalizingly in layers and relies on emotional realism over cheap tricks. While we may have resisted Weiner’s methods — you’re telling us Megan Draper and Sharon Tate are wearing the same shirt by accident? Yeah right! — he slowly but surely dragged us along, sweeping us all up in his immersive vision. What’s going to happen next week on “Mad Men”? As per usual, we’ll just have to wait and see.

That’s why the watermelon gag is so revealing in its own way — because it tells us how the show isn’t going to end. Not with the satisfying, predictable thunk of Don Draper out an office window, but with something that feels much more like the show has always felt — uncontrived, true to itself, unabashedly opposed to fan-service, and entirely of Weiner’s own design.