Education "reform's" big lie: The real reason the right has declared war on our public schools 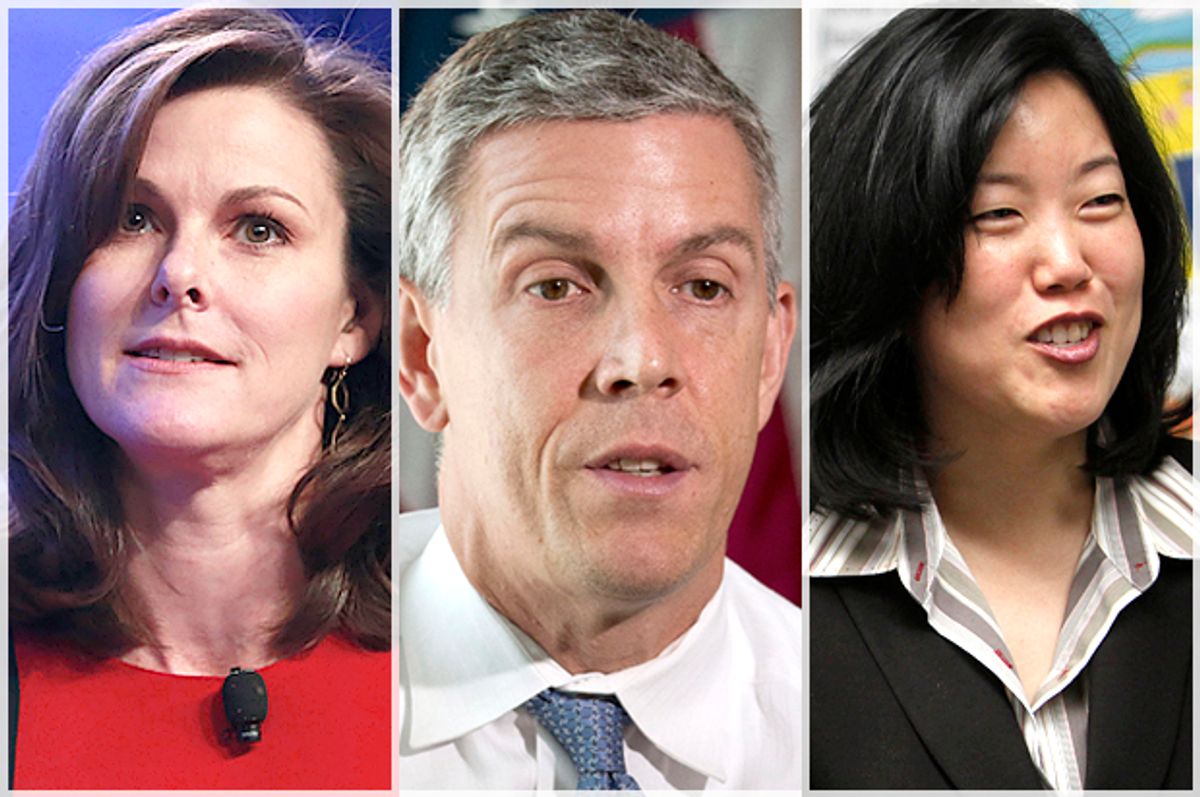 Excerpted from "Sixteen for '16: A Progressive Agenda for a Better America"

Reform (noun): a policy that is designed to undermine the effectiveness of a public institution in a way that generates private gains.

Reform (verb): to make something worse.

When did reform become a dirty word? Thirty years of education reform have brought a barren, test-bound curriculum that stigmatizes students, vilifies teachers, and encourages administrators to commit wholesale fraud in order to hit the testing goals that have been set for them. Strangely, reform has gone from being a progressive cause to being a conservative curse. It used to be that good people pursued reform to make the world a better place, usually by bringing public services under transparent, meritocratic, democratically governed public control. Today, reform more often involves firing people and dismantling public services in the pursuit of private gain. Where did it all go so wrong? Who stole our ever-progressing public sector, and in the process stole one of our most effective words for improving it?

At least so far as education reform is concerned, the answer is clear. The current age of education reform can be traced to the landmark 1983 report A Nation at Risk, subtitled “The Imperative for Educational Reform.” Future dictionaries may mark this report as the turning point when the definition of reform changed from cause to a curse. In 1981 Ronald Reagan’s first Secretary of Education Terrel H. Bell appointed an 18-person commission to look into the state of US schools. He charged the commission with addressing “the widespread public perception that something is seriously remiss in our educational system.” The commission included 12 administrators, 1 businessperson, 1 chemist, 1 physicist, 1 politician, 1 conservative activist, and 1 teacher. No students or recent graduates. No everyday parents. No representatives of parents’ organizations. No social workers, school psychologists, or guidance counselors. No representatives of teacher’s unions (God forbid). Just one practicing teacher and not a single academic expert on education.

Which gets to the point of the matter: For most of the 150-year- history of public education in the U.S., public schools have done a pretty good job. There is no crisis in public education. There never has been—or at least not until now. This time really is different. This time the issue is not the quality of our public schools. This time the issue is the survival of our public schools as public schools. Public schools today face relentless attacks from pro-business conservatives who see U.S. public education budgets as pots of gold to be mined for private gain. In the 2011-12 school year no fewer than 35 states supported for-profit “education management organizations” (EMOs) with taxpayer money; these for-profit EMOs collectively “managed” the education of 462,926 students. These figures from the National Education Policy Center include only for-profit “public” schools and do not include students educated at private schools at public expense through school voucher programs. They are also minimum figures; they include only the schools that the authors of the study could find and identify as being run for-profit providers. There is no centralized database for tracking the privatization of our public schools.

There is also a not-for-profit EMO sector that is roughly equal in size to the for-profit EMO sector. The dirty open secret of not-for-profit EMOs is that most (though not all) of them are essentially just pass-through front operations for profit-making companies. The fine line between not-for-profit and for-profit EMOs is finely delineated in Stephanie Strom’s in-depth 2010 report for the New York Times. For all practical policy purposes, the for-profit and not-for-profit EMO sectors can be considered one and the same. Putting both together, and assuming that 10% of the sector is not captured in the National Education Policy Center’s annual survey, puts the likely number of public school students sitting in for-profit classrooms at over one million. This is still a small proportion of all public school students, but it is growing rapidly. Taken to its rational conclusion, the conservative agenda calls for nothing less than the complete privatization of all public education in America.

The privatization agenda can be very seductive. Students aren’t studying? Threaten to fail them and hire private testing companies to keep them in line. Teachers aren’t teaching? Threaten to fire them and create private charter schools to replace them. Parents are voters and by definition always right, so empower parents as consumers to buy the education they want for their children. We choose and buy our children’s food, clothing, and toys. Why not choose and buy our children’s education? Why should government bureaucrats decide what’s best for our kids? The conservative agenda will put us in charge of our children’s education. What could be wrong with that?

First, our children’s education should be in the hands of professionals whose first and only priority is education. Do we really want our children’s futures to be in the hands of for-profit corporations? For that matter, do we really want our children’s futures to be completely in the hands of their parents? It is a sacrilege in politics to say anything bad about parents, but let’s face facts. Collectively, we give our children too much food and too little exercise. We use televisions and computers (sorry, educational videos and learning software) as baby-sitters. Our basements, closets, and garages are filled with piles of junk that pass for toys. Parents are great at love and security but maybe not so great at education. In contrast, public school teachers are full-time professionals who are trained in child development and paid to focus on our children all day (and often unpaid into the night). Sometimes it’s best to rely on professionals for things that really matter.

An important principle of professionalism is that professionals should not stand to gain or lose from the decisions they make in carrying out their professional duties. A serious problem in the medical profession is that doctors can make much more money working for the drug companies than working for their patients. A better model is to insulate professionals from financial considerations. Clearly, for-profit schools are dangerous because as for-profit companies they are obliged to care more about their profits than about our children. Ditto companies that provide pre-packaged educational products like standardized tests, test preparation software, pre-packaged lesson plans, and even school lunches. Buyer beware.

Truly public schools insulate educational decision makers from profit motives of all kinds. Unionized schools ensure even higher levels of professionalism by insulating educators themselves from the day-to-day pressures of financial performance. That’s not a bad thing. That’s a fantastic thing. Union protections reduce the incentives teachers face to give high grades just to keep everyone happy, to push “difficult” children out of their classes, and to teach to the test. Unions ensure that school districts provide appropriate professional training opportunities for teachers and administrators. And unions prevent favoritism in the awarding of raises and promotions, substituting instead the principle of seniority based on experience. In short, a unionized school may not be a perfect school, but it is a professional school.

The second reason that strong public schools are in the national interest is that the most important purpose of public education is not to educate students. It is to build the American nation. Think about it. Why is the government even involved in education? Why not leave parents to pay for their own children’s education? We don’t feed, bathe, house, and clothe each other’s children. Why do we pay others to educate them? The answer is not charity. We have programs to help feed, house, and provide medical care for the children of the poor. But we don’t provide these benefits to the children of the rich. We don’t even provide free medical care to the children of the rich. But we provide free public education to everyone.

We provide free public education to everyone because education is primarily about good citizenship, not academic learning. All those hours spent in classrooms should be used to help our children grow into happy, productive, moral, responsible, reasonably well-behaved adult citizens who care deeply about our communities, our country, and our world. Subjects like art, music, and theater are just as important for citizenship as are subjects like English, science, and math. Reading, writing, and arithmetic may be necessary skills for life in modern society, but when was the last time you had to diagram a sentence or factor an equation? And if you had to, could you? Even if private companies or charter schools could raise student test scores (and there is no evidence that they do), they cannot shape citizens. Citizens can only be created by committee. And the bigger that committee—the broader our children’s education—the better.

Education for citizenship requires the involvement of parents and teachers but also school administrators, elected school boards, parents’ groups, teachers’ unions, parent-teacher associations, religious congregations, local businesses, sports clubs, community orchestras and playhouses, and all the other stakeholders in society. Children need multiple bases of support in learning how to grow into adulthood. This is where the 1983 report A Nation at Risk went tragically wrong. It excoriated the transformation of schools into community centers and sought to reverse the trend. Ever since then, education reform has focused on turning schools into knowledge factories. Teach more, study more, test more. Everything else—less.

What we need schools for—strong public schools—is to reproduce America in the next generation. America isn’t a place; it’s a people. All Americans have a stake in shaping what the its next generation will be like, even people who don’t have children. That’s why even people who don’t have children pay taxes to support public education. Our next President should put the public back into public education. We don’t need gimmicky national standards programs. We need national financial support for local public schools, staffed by professionals who know their students and care about their communities.

Enough with false reform. The federal government should entrust states and communities to bring up good citizens, and give them the resources to do so. States should trust their counties, and counties their towns. It may go against political nature to provide funding without demanding measurable outcomes, but good citizenship is not measurable. A progressive President who is not beholden to the for-profit education industry can pull many levers that will return America’s public schools to public management in the public service. The for-profit education industry may still be small enough to be beaten in 2016. By 2020 it will almost certainly be too late.

Salvatore Babones (@sbabones) is an associate professor of sociology and social policy at the University of Sydney and an associate fellow at the Institute for Policy Studies (IPS). He holds both a master's degree in statistics and a Ph.D. in sociology from the Johns Hopkins University. His latest book is Sixteen for '16: A Progressive Agenda for a Better America.