Grow up, inner child: I survived adult preschool play-for-pay, but I'm not going back

Adult preschools, coloring books, even skipping club — is there nothing we won't buy to take us back in time? 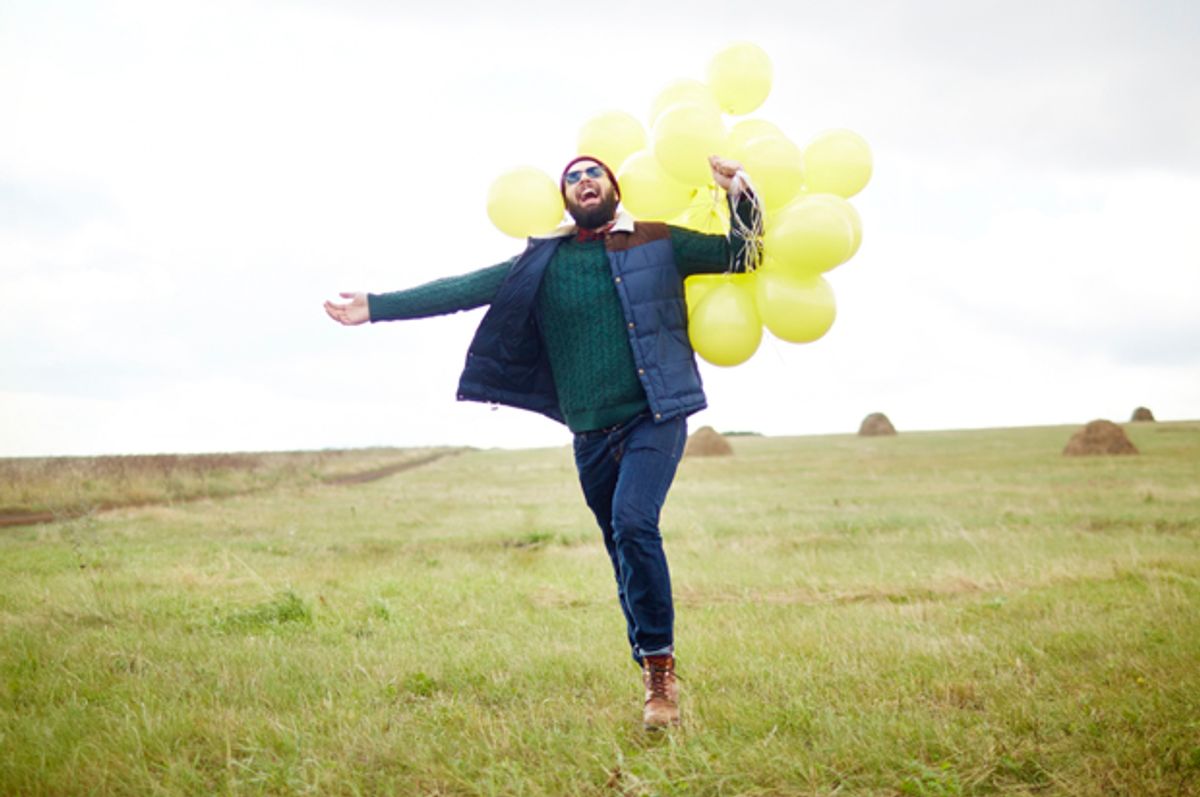 It was a cool, spring afternoon on a Saturday, and I was skipping down 53rd and 2nd on the Upper East Side of Manhattan. To be clear, I was literally skipping. This was not the bouncy jaunt of a businessperson who closes her first deal, nor was it the dreamy glide of a teenager who found his true love. No, this was skipping in its purest, most childish form — the hop on one foot, then hop on the other, criss-cross variety. The type that made your butt move, involuntarily, from side to side. I was skipping the way little boys and girls did in '80s detergent commercials.

Prior to this day, I hadn’t skipped since the fourth grade — well over 20 years ago. And even then, I didn’t do so voluntarily. The gym teacher made our classes do relay races against one another, and just like in an Olympic swim meet, where each person on the relay must swim a different stroke, my relay partners and I each had to walk differently. So it was my job to skip.

I was a very self-conscious 9-year-old. I thought that skipping was something that "only girls do," and for an Asian kid who grew up in a blue-collar, Irish/Italian town, effeminacy was not a good look. The only small comfort was that everyone else, who would have made fun of me, was skipping as well.

But fast-forward to that cool, spring afternoon, and I had none of that "strength in numbers" reassurance. For all intents and purposes, I was skipping on my own. And I found myself aware — very aware — of people’s eyes on me.

It was something that Michelle Joni Lapidos, the founder of the Skipping Club, had anticipated, and found to be positive.

“The physical act of ‘doing something’ is very powerful to the people around you. It would take a cynic to think that this is all crazy and stupid. You can’t force something on somebody, but you can be that person, and be on the edge.”

Whereas I am happier blending in, Michelle Joan Lapidos is someone who demands to be seen. On that day, she had red hair dyed the color of Christmas ribbon. She wore funky platforms, and a white ballerina tutu around her waist. And her fingers were decked out with rings — heavy metal ones, although one of them was a silver pipe cleaner, which looked like it had been crumpled up and crammed on her finger. It seemed as though Lapidos dressed herself in an impulsive frenzy. As it turns out, a lot of Lapidos’ ideas begin as impulsive gestures.

The Skipping Club itself was founded back in February 2013 when, on a whim, Lapidos decided to skip up Broadway on her way to her manicure/pedicure. She got a positive reaction from the people on the street and in social media, and so she began putting together organized skips. She would focus on one neighborhood or location, like when she and her fellow skippers went hopping across the Brooklyn Bridge.

At first, the club was just her friends — anyone Lapidos could wrangle into joining her. But today, the Skipping Club has a reliable membership, with new members cycling in and out. Their first skip of the season is scheduled for May 3; each skip is, on average, about 1.1 miles. This summer, she plans to have an around-the-world theme — her skips will go to cultural centers such as Little Italy and Chinatown. Lapidos also plans to expand her business, and open up additional skipping clubs in New York City and beyond.

Lapidos’ other, newer venture is an adult preschool. Anyone who’s 18 years or older can attend for a fee, and engage their creativity with macaroni and glue, sparkles and glitter. There’s also snack time, naptime, sleepovers and class trips — everything an adult needs to learn (or “relearn,” as Lapidos notes) that they may have forgotten from childhood.

Plus, it’s conveniently scheduled in the evening; even a businesswoman who works a 9-to-5 job can attend night school on Tuesdays from 7 to 10. Like the Skipping Club, there’s a childishness to all of this. But Lapidos hesitates when I suggest that any of it might be infantilizing or "immature."

“I think that it’s ‘silly,’ because ‘silly’ is a choice that you make,” Lapidos said. “I think it is a mature thing to be able to do that. That spontaneous, playful mind-set doesn’t always jive with the real world, but my goal is to blend that, because that’s what I love to do, and everyone should do what he or she loves.”

Adult preschool was, at the moment, out of session, so I couldn’t sit in on a class. But at lunch, Lapidos retrieved a small can of Play-Doh from her bag, and gave it to me to play with as I asked her questions. I absent-mindedly squeezed it for the next hour, and it reminded me of a greasier, more pliable stress ball. And as I turned it over and over in my palm. It occurred to me that the things that relax us as adults, stress balls included, often have their roots in our childhoods. There exists a primal need for physical, sensory action, which diverts and redirects from more intellectual activities. How else to explain the explosion in coloring books for adults? In the same way that the repetitive sucking of a pacifier soothes my infant son, squeezing this Play-Doh has a relaxing, soothing effect. Perhaps it’s only the social stigma of playing with Play-Doh in public that prevents me from doing so.

“This is one way to tap into an inner child, something that [you] might have found sort of fun,” Lapidos said. “And it’s still fun.”

“It’s not necessarily about reclaiming a youth that you didn’t have or being 4 years old again. It’s about nourishing something [in you] that will always be young, fresh, unafraid, willing, accepting, and open-minded.”

Conceptually, this made sense to me. But then I thought about a group of construction workers watching me skip, or make macaroni art, and this rationalization was of minuscule comfort.

It was time to skip. Lapidos and I were joined by Lapidos’ intern, an 11th grader at the Hewitt School, and, together, we went outside. We started by getting loose. The intern played some upbeat music on her phone, and we started by just bouncing in place, to the beat of the music. This, as Lapidos explained later, was a "scaffolding" technique. Some people might not be comfortable skipping right off the bat, and this could dissipate that initial discomfort.

I have no rhythm, at all. I was completely off beat, and I did that really pathetic move, where I stopped and started several times, in an effort to get on track. I felt myself getting red, as professional people in business suits walked by. But after a while, the embarrassment dissipated; it’s a normalizing effect. And about three minutes later, we joined hands, and we yelled out the following phrase.

“Paint the streets with joy, love and positivity! PAINT THE STREETS!”

And off we went.

We skipped for a short time, but I realized two things. First, that skipping came back to me very easily. I had not tried skipping in the two decades since fourth grade, not even to prepare for this story. But it came back very easily, so long as I didn’t think too hard about it. I suppose that just like learning to ride a bike, skipping is something one never forgets once he or she learns it.

Second, I realized that skipping is a cardio workout, at least for someone who is as out of shape as me. Maybe I didn’t pace myself well enough, or breathe regularly enough, but a couple of blocks later, I was gassed. Perhaps this is why I felt little embarrassment when I actually started skipping; I was so focused on the physical motions of skipping and my own fatigue, that everything else became secondary.

The reactions of people on the street surprised me. I expected to see a lot of disgusted, weirded out faces — of people laughing not with us, but at us. But instead, the vast majority of people received us positively — I got some fascinated looks and lots of smiles. One senior citizen even came up to us after we stopped, and introduced himself to us. Others paid us no mind, but no one gave us an overtly negative reaction, which shocked me completely. We skipped two blocks, skipped back, and ended in a group hug.

I walked away with an appreciation for what we had done together. Lapidos, for all of her eccentricities, is sincere and well meaning in her efforts. But I was also thankful that I did not have to pay for these experiences, as many of her clients do. Isn’t it possible to do these self-discovering activities by one’s self?

“Wonderful. I want to encourage people to do that,” Lapidos said. “But the preschool experience that you’re going to get with me is a unique, community experience. It’s a support system that takes you through a journey. Not everyone is going to want to do that, and not everyone can do that. But the fact that that’s out there is exciting.”

“I would love for more people to go get Play-Doh at the store and start playing with it. I truly believe that adults tapping into that makes people more playful, and then it vibrates and makes other people happier. We would all have a better world if we just played more. Anyone can do it, but not everyone will see it as something that’s important to do.”

“Skipping is just one example of how we can express ourselves in a way that is uncomfortable at first. Realize that what you get back in return is actually more positive that you’d think. It can be a template to try out other scary things in your life.”

It’s true that I would never have tried these activities on my own. And I definitely needed the workout. But truthfully, I feel too old for this activity. Perhaps acting like I’m 4 is something that would have appealed to me in my early 20s. I was unmarried, single and out of college. But now that I’m married and have my own child, I’ll leave "finding my inner child," at least so overtly, to the youngsters. My son’s childish needs take priority; instead of skipping, maybe I’ll go on stroller walks instead.