The magic of "Wolf Hall": The exquisite (and chilling) details that bring history to life

From its masterful acting all the way down to its period-perfect approach to hats and heads, "Wolf Hall" nails it 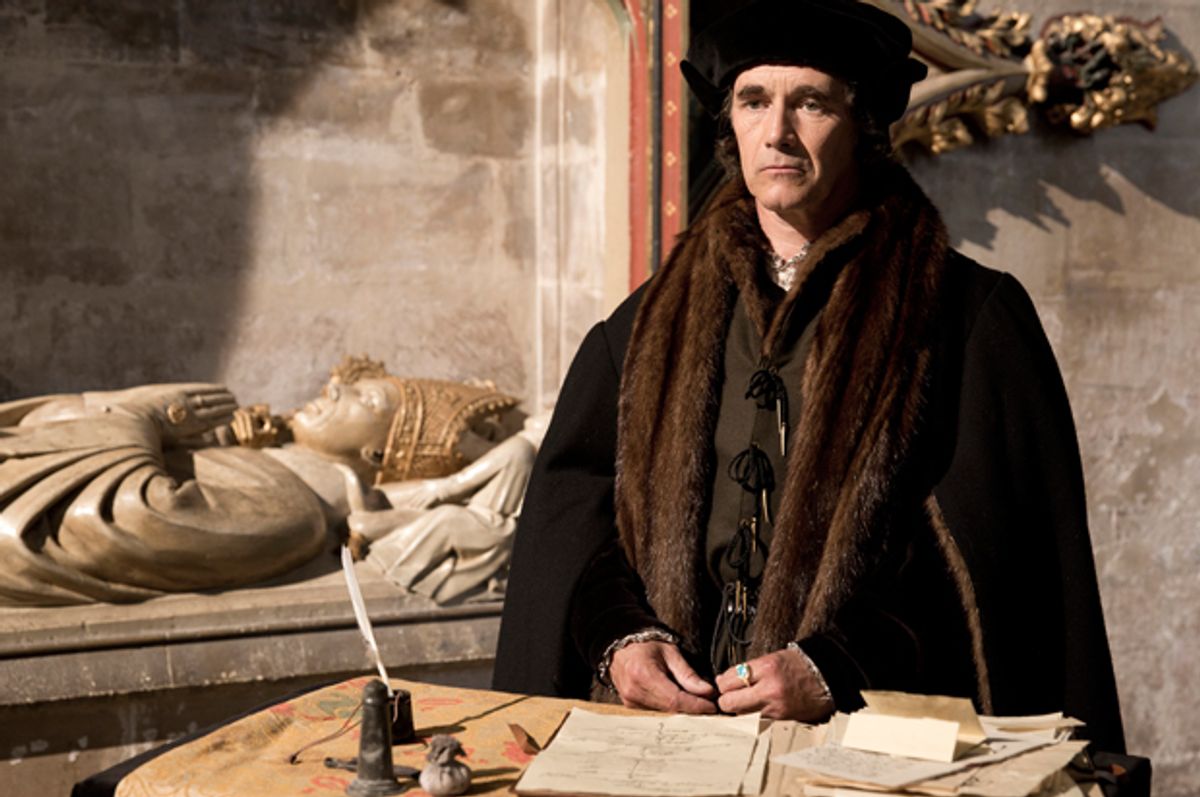 Everyone in “Wolf Hall” is always wearing a hat. Then men wear actual caps—floppy velvet ones, or stiffer, trapezoidal affairs, like this one in the most famous portrait of Thomas Cromwell. The women cover their hair, or at least nod in that direction, with French hoods (fancy headbands with a veil or caul over the hair), gabled hoods (more angular headbands and often more fabric, leading to the iconic look of the queens in a deck of cards, for example), as well as simpler white caps that tie under the chin. There are a lot of good reasons to be always wearing a hat in the 1500s—like warding off a chill, hiding lice or putting off hair-washing for a while longer. But even though I know that, now that we do not live in a be-hatted world, I frequently forget it.

In “Wolf Hall,” the BBC Two production that is finishing its six-episode limited run on PBS’s Masterpiece tonight, when you see the crown of anyone’s head, unobstructed, it’s a moment of humility and vulnerability. The men doff their caps when they greet ladies or men far above their station, only to hastily put them back on; women are never without their coverings except in the bedchamber (and even then, they might be wearing a nightcap). The little Princess Elizabeth sometimes runs around bareheaded; a drunk man might lose his cap in an evening of revelry.

But there is no moment of pure vulnerability as public and as pivotal as the moment when Anne Boleyn is crowned Queen of England, pregnant and in a white gown, surrounded by handmaidens. She enters the room without anything covering her long, dark brown hair, and then prostrates herself in front of the throne, turning her left cheek to the floor. And then she sits in the high seat offered her as the Archbishop of Canterbury places an unwieldy, ill-fitting crown on her head, raising her up from vulnerable to the most powerful woman in the room.

“Wolf Hall” is a rare adaptation from book to screen that makes the most of what the visual medium can provide—an extra layer of aural and visual storytelling—without sacrificing the complexity of its narrative. Hilary Mantel’s novels on Henry VIII’s adviser Thomas Cromwell, “Wolf Hall” and “Bring Up the Bodies,” are exquisite literary masterpieces, requiring little to no improvement whatsoever. “Wolf Hall” is astonishing for bringing the story—which is also, at least in part, history—to unbelievably pitch-perfect life. It’s not without flaw—Mike Hale at the New York Times has a fascinating take on the limited series, arguing that there’s a hollowness at its core due to the overall opacity of Cromwell’s motivations, even as he seems horrified by the blood on his hands spilled in the name of king and country. It’s a critique that could be leveled at the books, too: Cromwell is a brilliant man, but he makes his fortune and reputation through enforcing the desires of the men he serves. It’s not always clear why he doesn’t pack it in and shift to private practice—except for a lost sense of what it means to have a monarch and dedicate your life to serving them, as well as, you know, historical fact. In some ways, the books serve as a fact-finding mission for Mantel, an attempt to understand the inner workings of a man who we know to have done certain things and lived a certain way. The series cannot possibly be as illustrative of his psychology.

It makes up for it by offering other details. They’re not all historically accurate—in fact, the coronation I described above differs quite a bit from this purportedly first-person account by Edward Hall. For all I know, the ubiquitous hats and trailing veils might be a convenient affectation (though I don’t think so). Mantel took liberties with Cromwell’s life, and the series has to follow suit.

But what makes “Wolf Hall”—both the Booker Prize-winning book and the current miniseries—so indelible and lovely is that it feels real. Hale took umbrage with the series’ “prosaic” quality, but to my mind that lent an intimate credence to a world that otherwise is almost completely unrecognizable. The color palette of the series is a period-appropriate chiaroscuro, delivered by Gavin Finney, and the careful bounds of the production make every moment feel not like the 21st century looking back at the 16th but the 16th, itself. The extraordinary privilege of the royal family is illustrated in both grand details and slight ones: They have palaces and wear jewels, but they also have fresh fruit on the table every morning. They do not look out at slops or mud, but impossibly lush meadows. Musicians play lutes, softly, in a corner; in one of the finer subtleties of the show, the music transitions from diegetic to non-diegetic, allowing the lovely original score by Debbie Wiseman to seep into both the characters' lives and our own.

But all of this pales to the performances. My God, the acting in this series. The casting is remarkably faithful to the historical record — Anne Boleyn’s wide eyes, Mary Boleyn’s apple cheeks, Cromwell’s working-class sturdiness, Henry’s regal height. Damian Lewis as Henry VIII is so spot-on that he might as well have stepped out of a painting—his very stance is recognizable—and despite layers of unfamiliar costume, he is every inch the entitled, spoiled king, evolving from understandably fed-up in the first hour of the series to a near-monster by the last. Claire Foy’s Anne Boleyn is also impressive: Anne was not a warm, kind or even particularly beautiful woman, and Foy doubles down hard on being that unflattering, shrill “creature,” as Ambassador Chapuys called her.

And Mark Rylance as Thomas Cromwell is absolutely magnificent; it is, simply put, one of the best performances we have ever seen on television. Rylance is not a frequent screen-performer, but in Britain he is widely regarded the greatest stage actor of his generation. It is not hard to see why. He is Cromwell. He neither catches the eye nor recedes into the background; you cannot help but notice him, even though he never demands your attention. And for a character that is more an observer than a talker—for one who came alive on the page through prose—Rylance manages to convey Cromwell through pure being. He ages visibly, on the screen, from the first hour to the last. He is moved to silent moments of tenderness and generosity that never are later discussed; he lives and loves, mostly tragically, in the shadow of much more powerful people whose trifling happiness he is charged with preserving.

In the final episode of the series, airing tonight—which, if you know your history or have read the books, I cannot spoil for you, because you know it already—the pot boils over. Anne Boleyn’s fate is sealed, and he, Cromwell, is the one to seal it. “Master of Phantoms” is an hour where the series’ strengths are all showcased in full force, the details coming together to deliver its final, deadly blow.

For most of the episode, Anne is dressed in a rose-pink silk gown with a string of pearls wrapped around her throat and tucked into her bodice. The resulting effect frames her upper body, exposing her vulnerable, pale bosom. In scene after scene her chest flutters rapidly, like that of a terrified bird; the deceptively innocent dress is imprisoning her, the string of pearls is a tightening noose. By comparison, Henry is decadent and expansive, taking up more and more space with his puffed sleeves, widespread arms, and broad, shit-eating grin. He disappears from Anne’s life, in the worst betrayal of all; after conspiring to be rid of her, he will not even witness her execution.

The dirty work falls to Cromwell—but in the series, more than in “Bring Up the Bodies,” you see Rylance’s Cromwell realize, slowly, the shape of his own doom. Anne likes to tell Cromwell that she built him up, and she can bring him down. As Cromwell then brings her down, instead, he can see how he might very well be next—it’s writ on his face throughout the distasteful work, and made most clear in the final scene, in the mask of horror he presents to his elated king. Cromwell only became a fixture at the Tudor court through his loyalty to Cardinal Wolsey (Jonathan Pryce, in the miniseries), and though he enacts his vengeance on those that worked against his master, it’s only in the final episode that he acknowledges what has been true from the start: The true architect of his liege’s downfall is none other than the self-absorbed king himself, whom he now serves in Wolsey’s stead. There is no victory to that, no happy ending. There is just the price you pay. Which, in this era, would be his head—a price paid, four years later, to his ever-demanding king. For just a moment, Cromwell, the surprisingly modern man of the Tudor era, can see into the future.