I was a young sportswriter. He managed baseball's best team. Then he drunkenly asked me to step outside 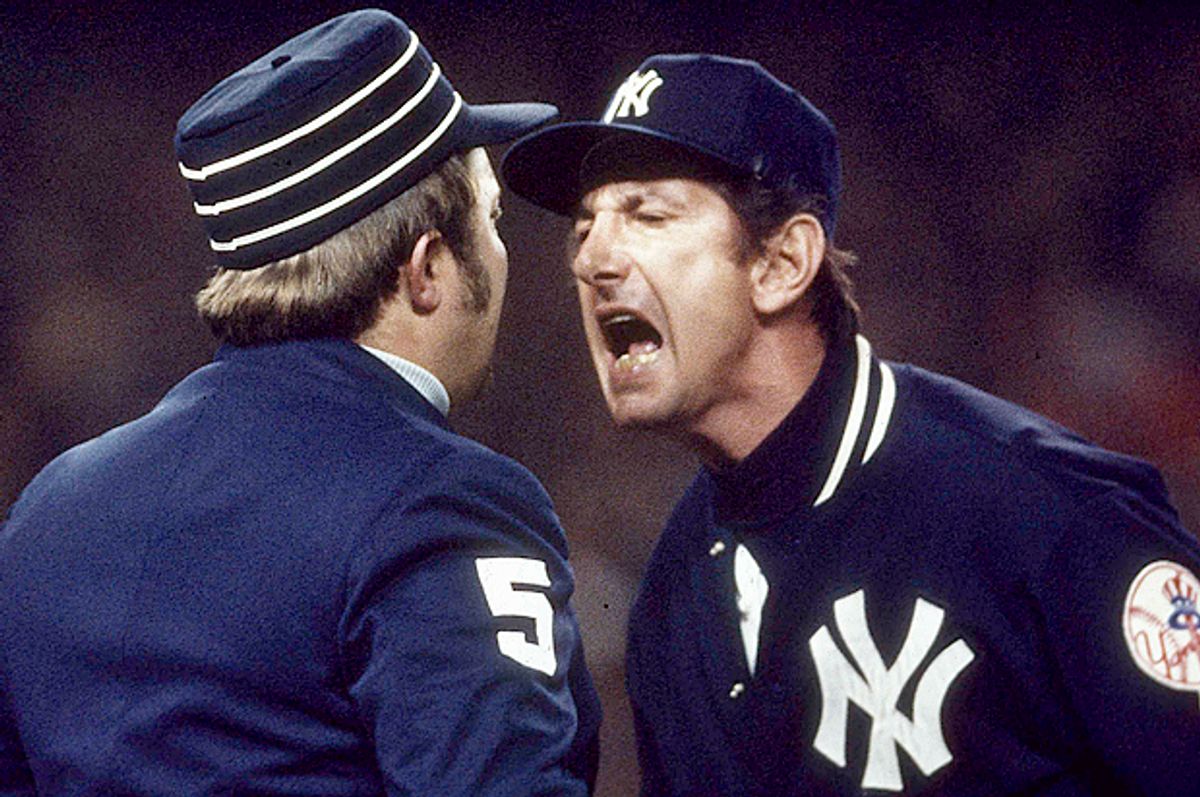 For all his volatility and unpredictability, Billy Martin did not try to beat up many sportswriters. He threatened and yelled at plenty during four hot-tempered decades in the major leagues, but he rarely came close to actually slugging one.

It is then perhaps something of a badge of honor that I am one of the few writers he seriously considered punching. It happened in a Cleveland bar in 1986 – and as was the case with many of Billy’s fights and near-fights – it was a misunderstanding.

Billy was in between Yankee managerial jobs that season but remained on the team payroll as an occasional Yankees television announcer. I was in my late-20s, and for a few seasons had been a Yankees beat writer, traveling with the team for the Bergen Record, a New Jersey newspaper.

One night in Cleveland, a game was called because of rain at about 8 p.m. Everyone had already eaten at the stadium so the entire Yankees party was released into the night.

Many of the players, coaches and media ended up in a tavern not far from the stadium that had an oval bar. Billy was seated on one side of the oval next to Bill Kane, the Yankees traveling secretary and a frequent drinking buddy. Kane, whose nickname was “Killer,” was like a character out of a Damon Runyon novel. The Yankees chief of provisions and a Mr. Fix It for all kinds of problems – from game tickets to stalling a wife who arrived unannounced until a mistress could be extracted from a player’s hotel room – Kane had all-seeing eyes.

I was directly across from Billy and Kane with the bartenders working in between us. Billy was too far away for us to converse, and since he was a part-time broadcaster now, we did not speak nearly as much as we did in the previous season when he was the Yankees manager. But that night Billy waved at me a couple of times, which was a little odd by itself.

The bar was busy and loud, but at one point, Billy went to the restroom and Kane motioned for me to come see him.

“Hey, Bill, did you write something about Billy, saying that the Yankees were better off with him in the TV booth than the dugout?” Kane asked me.

“Did you say he shouldn’t manage again because he’s washed up?”

“Well, Billy thinks you did. He said he didn’t see it himself but someone told him about it. He’s really pissed off.”

“Killer, I swear I haven’t even typed Billy’s name in a month. I didn’t write anything bad about him.”

Kane, ever sagacious, looked at me. His Irish eyes, witness to many a late-night barroom fracas, were trying to tell me something.

“Well, Billy gets like this sometimes,” he said. “He’s probably mixed up, but if I were you, I’d get out of here. He keeps talking about you. He’s getting angrier and angrier. Just go somewhere else. We’ll fix this tomorrow.”

I went back to my side of the bar and started to finish my beer. Everyone was having a good time. A rainout in a long baseball season is like a snow day when you’re in grade school. I didn’t want to leave. But after a few minutes, I reluctantly put on my coat. As I headed toward the door, I saw Billy get up from his seat to intercept me. When I was a few steps from the exit, he was at my side and in a very formal way -- which was not Billy’s way – he said: “Mr. Pennington, can I have a word with you?”

He shook my hand but he did not let go of it. He was squeezing it. Kind of hard.

“We need to settle our differences right now,” he said with a thin, insincere smile.

“Billy, we don’t have any differences,” I said. “I don’t know what you’re talking about.”

“Yes, you do, you wrote some bad stuff about me.”

“Billy, that’s a misunderstanding. This is a mistake.”

“Maybe we should go outside and settle our differences,” he said.

This is not what I wanted to hear.

Trying to defuse the tension, I grinned. He faintly grinned back but he did not let go of my hand. And he was glaring at me with a fire in his eyes that I had seen before, one usually reserved for an umpire, or Eddie Lee Whitson, the Yankees pitcher Billy punched and grappled with in a Baltimore bar one year earlier.

“Hey, Billy, come on, let’s go back to the bar,” Kane said putting a hand on Billy’s shoulder. “The kid was just leaving.”

Everyone under the age of 50 was “the kid” to Killer Kane.

Killer continued: “Come on, Billy, I’ll buy you a drink, we can talk about this tomorrow.”

“I do hope we get to settle our differences,” he said again with a glower. But he walked away.

I ducked out the door into the rain and unfortunately had to spend that rare, unexpected night off by myself and largely out of sight.

The next day at Cleveland Stadium I saw Billy sitting in the press lounge during the game with his Yankees teammate from the 1950s, Hank Bauer. I went over and Billy politely introduced me to Bauer.

“Billy, I don’t know what you think I wrote but it didn’t happen,” I said. “It wasn’t me. It’s a misunderstanding.”

Billy was listening and did not seem angry but he was not saying anything.

I said: “I think you have me confused with someone else.”

Billy shifted in his seat.

“I’m glad you came over,” he said. “That’s a strong thing to do. That’s how men handle problems.”

“I don’t remember what made me so mad at you,” he said.

Billy smiled. We shook hands. From that day forward, until his death three years later, there was never another cross word between us.