A former CIA officers faces decades in prison. David Petraeus got two years probation for similar charges. But why? 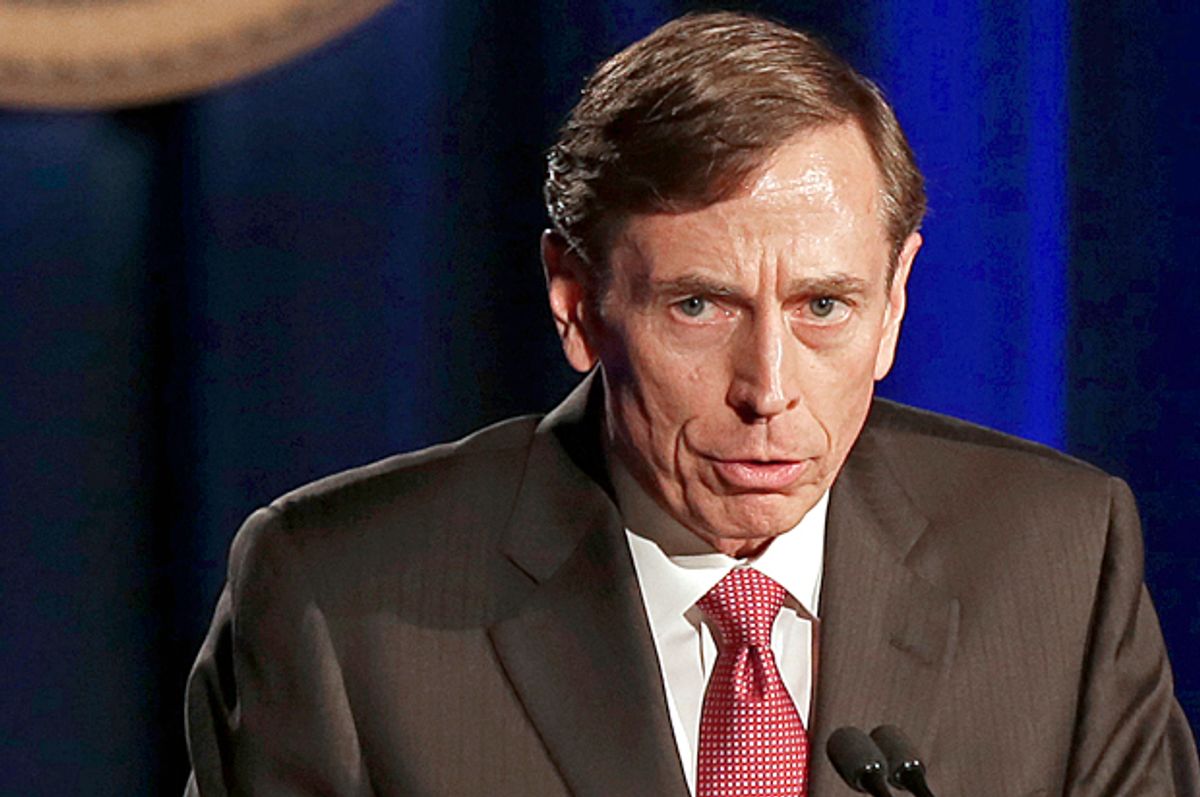 On April 20, 2015, federal prosecutors urged a judge to impose a “severe,” “substantial,” “significant and lengthy” sentence for former CIA officer Jeffrey Sterling, who was convicted of giving classified information to New York Times reporter James Risen about “Operation Merlin,” a botched attempt to disrupt Iran’s nuclear weapons program. Sterling was convicted of nine felony counts in January, including seven under the Espionage Act — an antiquated law that the Obama administration has used more than all its predecessors combined to go after leaks of information that expose government incompetence or illegality.

The tissue of lies in the government's sentencing memorandum begin with its revisionist history about what is universally regarded as a colossal CIA blunder. Operation Merlin provided flawed nuclear weapon blueprints to Iran in order to sabotage proliferation, but the flaws were so obvious that the Iranians detected the ruse and, in the process, the United States inadvertently gave Iran genuine nuclear weapons secrets. But the government describes the Merlin program as “meticulously conceived and developed over a period of many years by the CIA, in consultation with this country’s foremost nuclear experts . . . It was reviewed, vetted, and approved by high-level officials in the United States government, and used not only against Iran but other countries as well.”

The government doth protest too much about this “ingenious” effort of the CIA. As can be gleaned from a more transparent section of the government’s memo later on, its real beef is that Operation Merlin was exposed as “a ‘rogue’ operation, as characterized by [Mr. Sterling] and Mr. Risen…that made the agency appear hapless, even reckless, in its handling of the program.” President Obama has thus turned embarrassing the government into a federal offense by allowing the Justice Department, part of the Executive branch, to prosecute leaks under the Espionage Act, a law meant to go after spies.

The government’s sentencing memorandum is notable for its vitriol, describing Mr. Sterling as vindictive (five times) and selfish (three times). But putting aside the government’s serious need for a thesaurus, the memorandum takes a bizarre detour into whistleblower terrain, and then makes demonstrably misleading statements about espionage cases.

Strangely, the memo states, “[T]he evidence at trial laid to rest any doubt about whether the defendant’s actions . . . were motivated by a desire to expose government malfeasance. Nothing could be further from the truth. The trial in this case established conclusively that the defendant was no whistleblower.” This is an odd statement because, with regard to the leaked information at issue, Sterling never claimed that he was motivated by a desire to expose government wrongdoing; in fact,Sterling’s central defense, and a factor that the memo later says should exacerbate his sentence, is that he denies leaking the information at all.

I represent national security and intelligence whistleblowers who are being investigated, charged, and prosecuted under the draconian Espionage Act for allegedly mishandling classified information. The information about the Merlin debacle would certainly be a legitimate whistleblower disclosure as Iran's nuclear program was newsworthy at the time of the disclosure and is still in the news today. However, Mr. Sterling is not claiming to be a whistleblower because he denies being the source of the leak at issue and because no direct evidence at trial connected him to it. It is especially peculiar, therefore, that the government raises whistleblowing because in other cases where I’ve represented similarly-situated former government employees, such as that of former NSA senior executive Thomas Drake, the government has gone to great lengths to preclude evidence of alleged “whistleblowing” (the scare quotes are the government’s, not mine.) Perhaps the government confused Sterling’s case with those of so many others it charged with espionage who are in fact whistleblowers, like Edward Snowden, Chelsea Manning, John Kiriakou, and Drake. (Full disclosure: my organization represents Snowden, Kiriakou and Drake.)

The most disingenuous part of the memorandum, however, is the government’s attempt to sidestep the “need to avoid unwarranted sentence disparities among defendants with similar records, who have been found guilty of similar conduct.” It attempts this with the slick assertion that “[n]o other case charged in federal court even remotely resembles these facts.” This is true only insofar as people like former CIA director General David H. Petraeus, who gave a far greater volume of classified and potentially harmful information to his mistress, was given a sweetheart plea deal and was never charged—with anything. Conveniently, his sweetheart plea deal was to a misdemeanor not under the Espionage Act. Similarly, former CIA directors Leon E. Panetta and John O. Brennan, both of whom disclosed the identities of undercover operatives, were never charged. (I wrote about their cases at greater length here)

But what really puts the lie to the government’s assertion that there is no case “resembl[ing] these facts” is the stalled leak prosecution of General James “Hoss” Cartwright. The charges Cartwright faces are nearly identical to what Sterling faced. The government suspects that Cartwright leaked to a New York Times reporter details about a highly-classified operation to cripple Iran’s nuclear enrichment capability. Details of the program, code-named “Olympic Games,” were revealed by Times reporter David Sanger in a book and article, just as Risen revealed the Merlin program in his book "State of War." Here are two bungled, covert United States programs to counter Iran’s nuclear proliferation, a history that is in the public’s interest to know and debate given President Obama’s ongoing negotiations with Iran over its nuclear program.

The government really gilds the lily when it states that “the potential harm caused by [Mr. Sterling] is far greater in scope than the harm contemplated or caused by a defendant in any recent § 793 [Espionage Act] prosecutions.” This statement is patently false. In the Drake case, his Indictment stated that the information he allegedly mishandled “reasonably could be expected to cause exceptionally grave damage to the national security.” During pre-trial proceedings, the government stated that “if the NSA goes dark, Mr. Drake will have the blood of soldiers on his hands.” In Snowden’s case, a Pentagon damage report stated that “the scope of the compromised knowledge related to US intelligence capabilities is staggering.” Former deputy director of the CIA Michael Morell says in his new book that Snowden “played a role in the rise of ISIS.” And in Chelsea Manning’s court-martial, Under Secretary of State of Management, Patrick Kennedy, testified that the “damage” from Manning’s disclosures to WikiLeaks could essentially be “perpetual.”

On April 23, 2015, General Petraeus was sentenced to two years of probation and a fine under a law having nothing to do with espionage, but rather the unauthorized disclosure of classified information. This is actually the right result. Putting aside the hypocrisy of Petraeus’ lenient treatment compared to leakers who are not powerful or politically-connected, his is the correct model of how to deal with leaks of classified information to the press. This forced the government yesterday to counter, stridently and absurdly, that traditional spies could be charged under a different statute than the Espionage Act—rather than the more obvious answer that traditional leaks could be charged under a different statute than the Espionage Act. There are more than a dozen other criminal statutes and numerous administrative penalties for doing so.

Otherwise, we end up with the travesty of justice that is Jeffrey Sterling. He will be sentenced on Monday, based on a duplicitous sentencing memorandum that even a government witness describes as “overwrought hyperbole,” and he will be punished even more harshly for his refusal to plea bargain with the truth. He faces 20-24 years in jail. Indeed, the principal difference between Sterling and the leaky CIA bigwigs appears to be their respective rank, not their disclosures.

Jesselyn Radack is the director of National Security and Human Rights at the Government Accountability Project, the nation’s leading whistleblower organization.

Jesselyn Radack represents Edward Snowden and a dozen other individuals investigated or charged under the Espionage Act. She heads the Whistleblower & Source Protection Program (WHISPeR) at ExposeFacts.