Remember the time "Don had a problem?" 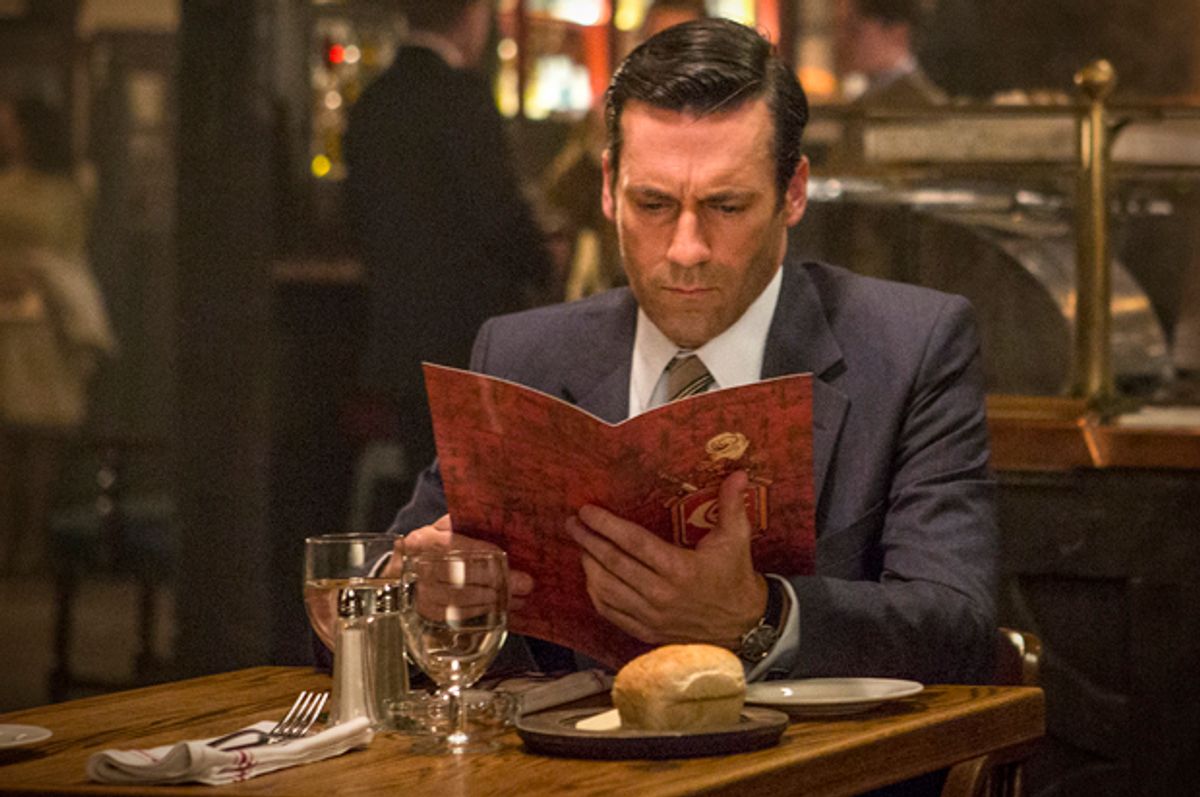 "Mad Men's" creative team has always been very tight-lipped when it comes to spoilers, as anyone who has seen the obtuse “next week on ‘Mad Men’” previews can attest. As Weiner himself told Vulture, "I have tied [the promo department's] hands ... and I’m amazed at what they do with the restrictions I have given them. Over the years, it’s evolved into this semaphore of storytelling.”

And if you think the preview trailers are cryptic, just try the synopses. Last night was one of “Mad Men’s” most shocking episodes, with the reveal of Betty’s terminal cancer and Don opening up about his tortured past. The official description, however, didn’t quite indicate at the gravity at what was to come.

Here’s a look at some of the series' pivotal events, as told via the AMC listings. Seriously, whoever writes these deserves a Pulitzer, or at very least a Clio; Their ability to condense major, life-altering events into vague understatements and euphemisms is a feat worthy of Don Draper himself.

1. Season 7, episode 13, "The Milk and Honey Route"
Misleading description: "Henry arranges a family reunion"
Translation: Henry goes to get Sally at boarding school after her mom is diagnosed with terminal lung cancer. Fun reunion, thanks Henry!

2. Season 6, episode 13, "In Care Of"
Misleading description: "Don has a problem”
Translation: A "problem" is like, when the elevator stops working, or when your favorite lunch place runs out of baloney. "A problem" is sort of an understatement for "In Care Of," in which a rapidly imploding, rock-bottom Don gets wasted, goes to jail, torpedoes a pitch meeting by revealing his true past to his clients and coworkers, and is suspended from the agency.

3. Season 7 episode 5, "The Runaways"
Misleading description: "Peggy helps Ginsberg with a problem”
Translation: Again, "problem" seems like an understatement for this interaction, in which a deranged Ginsberg cuts off his nipple and hands it to Peggy in a box.

4. Season 7, episode 4, "The Monolith"
Misleading description: "Sterling Cooper & Partners prepares for a guest”
Translation: The office gets a new computer. The computer, despite being a "guest," is not invited out for boozy lunch.

6. Season 6, episode 6, "For Immediate Release"
Misleading description: "Pete has an awkward run-in with a client.”
Translation: Pete runs into his father-in-law at a brothel while in the midst of cheating on his wife, and yes, it is awkward.

7. Season 7, episode 9, "New Business"
Misleading description: "Harry asks for Don's blessing.”
Translation: Harry asks Don's blessing to take Megan out to lunch, although he omits the part where he plans to sexually harass and blackmail her before they even get their apps.

8. Season 1, episode 13, "The Wheel"
Misleading description: "Peggy is given a new opportunity."
Translation: Peggy gets promoted to copywriter, right before she gives birth to a baby she didn't know she was pregnant with.

9. Season 4, episode 8, "The Summer Man"
Misleading description: "Joan and Peggy deal with high-jinx in the office.”
Translation: I guess it you could call it "high-jinx" when Peggy fires Joey for telling Joan she “wants to get raped” and drawing obscene pictures of her.

10. Season 7, episode 7, "Waterloo"
Misleading description: "Roger gets an unexpected phone call"
Translation: Roger finds out that Bert Cooper, his long-time partner and friend, has passed away. Admittedly, he finds out via the phone, but the message is sort of more important than the medium here. RIP, Bert Cooper.