"Homosexuals must repent or go to Hell": Florida church's neighbors are fighting back against its anti-LGBT message

Welcome to the neighborhood! "Not believing in HELL will not change the temperature of the FLAMES a single degree" 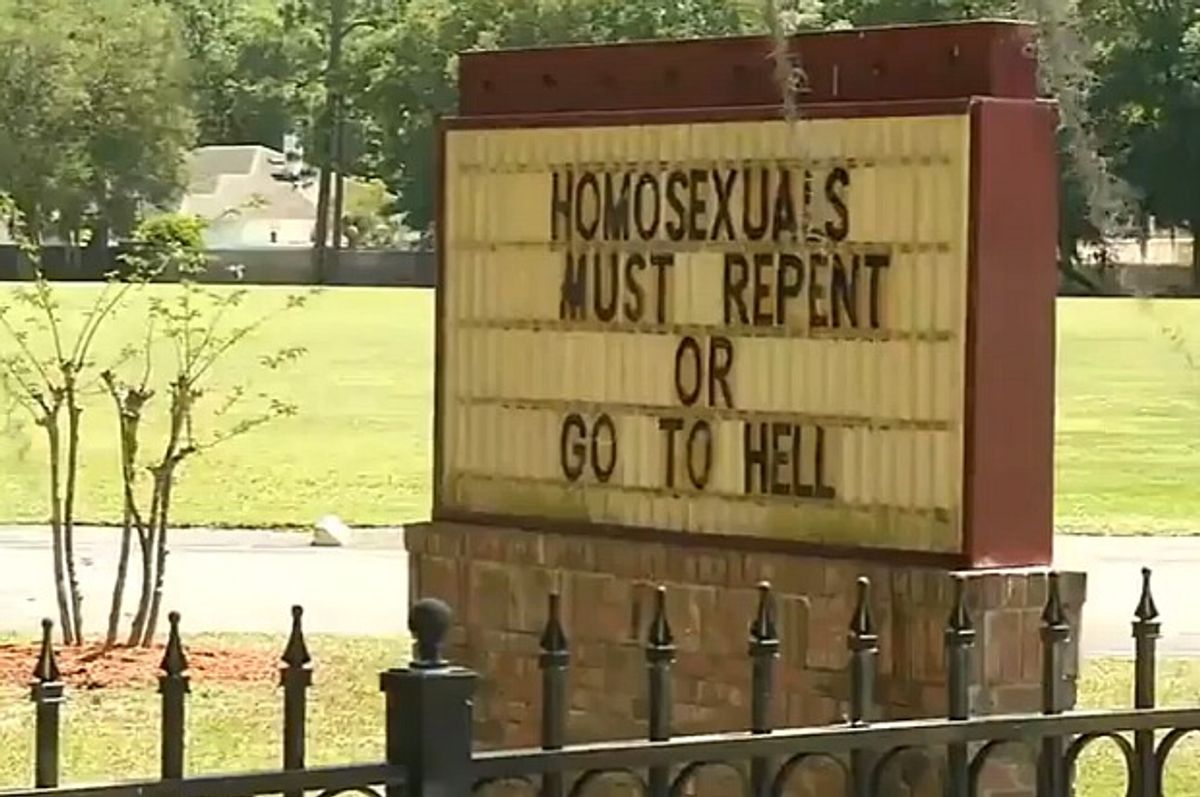 Today in "That's So Florida," a Jacksonville church is getting all the attention it could ever had dreamed for its attention-getting sign -- that suggests to neighbors that "Homosexuals repent or go to hell." Who says we don't live in an era of choices?

As News4Jax reported Sunday, many locals say they're not surprised at all at the content of Mandarin's First Conservative Baptist Church message -- apparently it's pretty typical of its philosophical stance. Pastor Gene Youngblood refused to speak on camera to reporter Heather Leigh about the sign that neighbors are calling "very sad," but did pen a three-page response, explaining, "Because we love all people (yet as directed in scripture to hate the sin) we therefore want to warn them of the coming judgment of God on the sin of homosexuality (and any other sin that is not repented)." He added, because you've got to get those ALL CAPS and superfluous quotation marks in, "It is my sincere prayer that perhaps 'ONE' practicing homosexual will have read our sign and will REPENT before it is too late and they are cast into hell. HELL is a real place and anyone not believing in the reality of HELL will not change the temperature of the FLAMES a single degree."

Look, I believe that anyone who lives in Jacksonville has a degree of authority on the subject of hell. I further believe it's a free country, which means people have a right to say nonsense. I also very much believe that this particular church and its leader — with what looks like their unique investment in the end of days — are not going to change their tune in this lifetime. Three years ago, Youngblood was outspoken in his opposition to a city amendment that would solidify gay and lesbian equal rights, fearing it would "create a super-class who would have more rights and protections than others." Way back in 1997, he supported a Baptist boycott of Disney for its gay-friendly practices, ''I think it's a wonderful decision. I feel every Christian, every moral person, every person who has a moral-ethical value relative to family values should take the same stand.'' And currently, you can purchase books like "The Gay Agenda," which "exposes the radical plans that a tiny minority in this country has in mind for the rest of us," from his "Conservative Theological University." (Youngblood also believes, by the way, "It’s obvious Obama is Muslim.")

People like Youngblood and his little flock will always be among us, eager to tell others with a totally straight face things like the flames of hell have a temperature that can be calibrated or that homosexuals cause super storms or that "You can't hold hands with God while masturbating." (That last one may be true, I've never actually tried it.) That stuff is all completely real and literal to them. To them, being gay is something to atone for, a sin that will forever in their minds boil down to the act of sex and not a broader identity. But that doesn't mean the rest of us can't point at their clueless absurdity. And one way or another, a message like "Repent or burn" may not be built to last. As News4Jax reported Sunday night, "Someone changed the message on that sign, and then somebody inside this parking lot came up and took down all of the letters. So it now is completely blank."