Is "Jane the Virgin" going to stay a virgin forever? 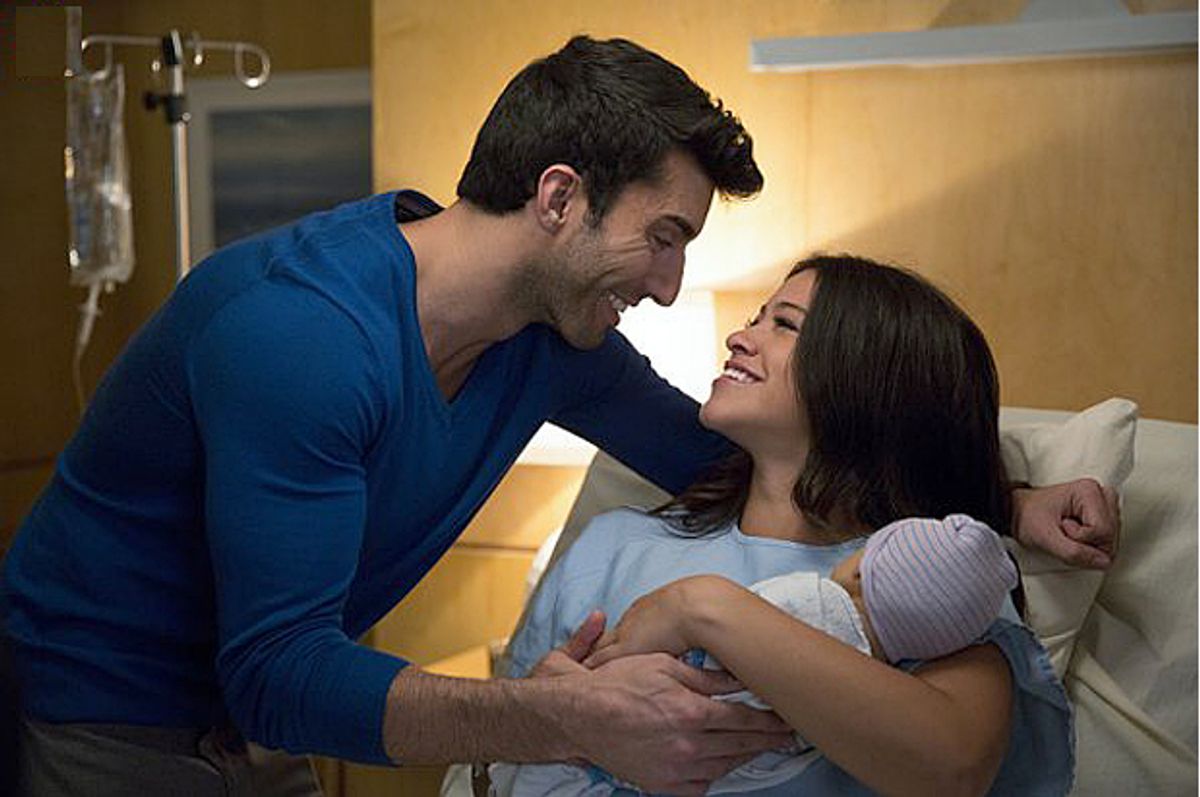 Jane Villanueva is still a virgin. Twenty-two episodes, nine months, two proposals, and countless plot twists after her gynecologist accidentally inseminated her during what was supposed to be a routine pap smear, Jane is very pregnant, a year older, and yes—still a virgin. It’s a little weird: As Jane’s friend Lina said to her at the baby shower, horrified that Jane wasn’t choosing to get a C-section: “You’re going to lose your virginity to your baby?!”

It’s a testament to the nimble storytelling of this freshman show, which ends its eventful first season tonight. On the one hand, there is tongue-in-cheek melodrama that keeps an audience hooked: underground criminal organizations, rogue plastic surgeons, crooked cops, secret twins, coma-and-amnesia, missing parents, surprise kids… the list goes on and on. On the other hand, “Jane The Virgin” tries to stay true to its characters, putting them in surreal situations while keeping them grounded in their worldview. It’s not easy to pull off. “Jane The Virgin” makes it look like a cakewalk.

The success is due not just to talented actors and adventurous plotting but a remarkable assuredness of tone—a vision, and a confidence in that vision. The show is palpably unique—genre-defying (telenovela-satire-dramedy?), medium-defying (there is no other show that makes as much fruitful use of on-screen text and even photoshop; CNN could learn a thing or two from “Jane The Virgin”), and singlehandedly making network TV vastly more diverse. The show both features a cast studded with Latino actors and engages wholeheartedly with the mélange of Hispanic, Eastern European, and whitebread American cultures in Miami: Scenes in Spanish follow scenes in Czech; the telenovela-in-the-telenovela, “The Passions Of Santos,” can take up as much melodramatic screen-time as a pro-wrestling tournament, a lactation class, and shopping for baby supplies at Target.

The word “diversity” is used so much it’s lost all meaning, but with “Jane The Virgin,” I think it still applies: There is a range of experience presented on the show that is breathtaking, one that pulls together middle-class suburban life, workplace politics, church gossip, immigration law, Rogelio’s vocal Twitter followers, and the difficulties of communicating across the gradients of culture, class, and race. The show’s partnership with Target is one of the smartest sponsorship deals I’ve seen on TV—the superstore, like “Jane The Virgin,” seeks to be broad-base without being boring. Both use color and music to great effect; both are invested in style and vision without being pretentious.

Furthermore, “Jane The Virgin” also attempts a level of diversity so daring that most of the rest American television steers far away from it: The many different textures of an average person’s relationship to the divine, even though in this case that is represented pretty unequivocally by a Catholic God. Telenovelas like the ones Jane watches—like the one “Jane The Virgin” is adapted from—can assume a Catholic audience, even if Catholicism in Latin America is on the decline. American audiences, meanwhile, are not nearly so uniform. “Jane The Virgin” has to strike a tricky balancing act between making religion part of the fabric of everyday life and also isolating it as the beliefs of particular, individual characters—especially because Jane’s culturally mandated and personally chosen virginity is the titular premise of the show. She's a modern-day Virgin Mary—sort of.

In the show’s mythos, Jane swore a vow of chastity to her grandmother, Alba (Ivonne Coll) because her own mother, Xiomara (Andrea Navedo) was so explicitly not chaste. Jane promised not to be like her mother and end up single and pregnant; this meant, in her abstinence-only, Catholic sex education, swearing off of intercourse entirely. The whole thing is illustrated in comically awful imagery: Jane’s grandmother gives her a gardenia, and orders her to crumple it in her fist; then, she orders her to attempt to restore it back to its original purity. It can’t be done. Virginity is just like that white flower; sex is just as damaging. “Jane The Virgin” has gone through a surprising number of episodes without anyone standing up and yelling um, none of that is true. And now, even though Jane is already pregnant—and single, and unemployed—she is still holding herself back from sex. Two weeks ago, she had a near-miss with sometime paramour Rafael (who is the father of her baby). After the moment had passed, Jane and “Jane” retconned the moment: She didn’t really want to have sex. (I don’t know about that. She looked pretty into it.) The fact of the matter is that Jane’s faith is the central driving force of the show—more than artificial insemination or Target tie-ins or romantic plot twists. And unlike a lot of shows that engage with religion overtly—like “Battlestar Galactica,” which talked about belief constantly, or “The Simpsons,” where God is a not-infrequent guest-star—Jane’s dedication to her virginity is merely a given, both for the characters and the audience.

This season has seen a lot of storylines approaching religion: The Villanueva family spends days preparing for Easter, their favorite holiday. Alba’s daughter Xiomara (Andrea Navedo) prays over her mother when Alba ends up in the hospital, and Jane, once she gets her teaching degree, briefly works for a Catholic girls’ high school (where she makes quite a stir as a pregnant virgin. Her image is stamped onto trinkets that the nuns who run the school begin to sell to devotees; couples come and ask Jane to bless them).

While it’s easy to read Alba as mostly religious and Xiomara as mostly not—as this roundtable at Jezebel observed, they embody two opposing stereotypes about Latina women, one ultra-religious, one “spicy”—Jane herself is harder to get a read on. She experiences moments of doubt, where a smaller version of herself complains about the implausibility of sermons while standing on her shoulder. She also experiences moments of being moved by belief—like when she determines that the right thing to do is to keep the baby and bring it to term, even though it was an accident, or when she falls for Rafael, the father of her child, because the petals rain around them like snow, and that, to her, is a sign. Her belief is mingled with romance and superstition, and her virginity is more important for being a promise made to her grandmother than a holy commandment from God. Despite some plot devices that keep Jane conveniently (and safely) conservative—no abortions or orgies here—Jane is a thinking, feeling, breathing woman.

The question is, now what? In tonight’s finale, she will give birth to a long-awaited daughter—presumably as every lingering plotline from the first season comes to some kind of bat-shit melodramatic head. It will be bonkers and amazing, and I cannot wait. But I do wonder when and if Jane is going to give up her own virginity. Much the show’s charm comes from Jane’s active exploration of these different interpretations of being a good person, one that echoes the vast numbers of people both in the U.S. and in Latin America who are moving away from the faith they were raised with. Will she finally have sex with a partner she chooses, without the forbidding disapproval of vague morality lurking over her shoulder? Can the show still be “Jane The Virgin” if Jane isn’t a virgin? Or, best of all, might Jane give up on the notion of purity through virginity entirely? She isn’t a delicate flower waiting to be crumpled; she’s a woman about to give birth. It’s a good moment to figure out what she is going to teach her own daughter, when the time comes.