Pete Campbell's redemption: Is "Mad Men" just toying with our need for a happy ending?

For at least one of our "Mad Men" characters, it looks like you can turn over a new leaf 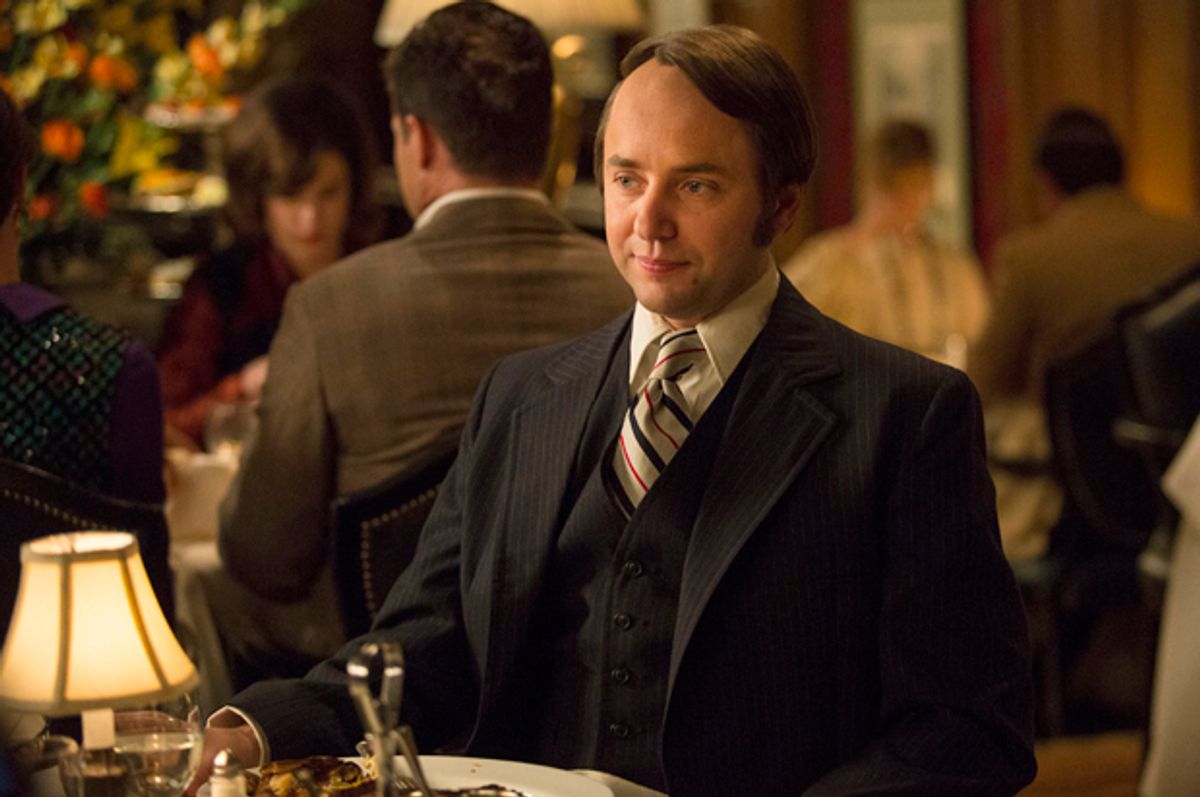 As we have seen over the past few episodes, Matthew Weiner isn’t in the business of doling out happy endings just to please. Joan was forced out of McCann-Erickson for fifty cents on the dollar. Betty found out she was dying of lung cancer at 38. And Don — poor, sad, predictable Don — is taking the milk and honey route, shedding his worldly possessions and revealing his Dick Whitman side to hostile strangers in VA halls.

Slowly but surely, all the dark forces that followed these characters for years — Joan’s experience of workplace misogyny, Betty’s smoking and her nihilism, Don’s fake life — are tightening their grips. “Mad Men” is a show about people trying to remake themselves and forge a new identity, while still being dogged by the shadows of the past.

So how are we supposed to feel about Pete Campbell, long the show’s most disliked character, getting what appears to be a happy ending? While tragedy happens all around him, everything is coming up Pete: A return to his family and Trudy’s loving embrace, and a fresh start in Wichita, complete with a private jet and millions of dollars. While anything could happen next episode, it’s also quite possible this is the last we see of Mr. and Mrs. Campbell. What are we supposed to take away from this?

I certainly wasn’t sure how to process Pete’s surprising redemption arc, because it brought up a lot of conflicting emotions. I’ll admit, as a hopeless romantic -- and one who has been burned by Weiner & co. one too many times -- my first reaction was to be happy for Pete. In a show that tends to be fairly pessimistic about human nature, and very pessimistic about relationships, I would love to see this as a rare moment of closure in a sea of loose ends. Pete has consistently done awful things, and has had awful stuff happen to him. But in the past few seasons we have seen him grow up and soften, and confront his flaws in a way that many others have not. As other characters have remained stuck in their ways, Pete has continued to adapt. He is thriving in his new workplace, and seems to finally be doing so on his own merits instead of at the expense of others. He has been a supportive colleague to Peggy and Joan, and seems to have shed his old-fashioned prejudice in favor of more progressive attitudes (compared to the good old boys at McCann, Pete’s practically a Suffragette). He’s a good father to Tammy. And last week, he manned up and defended his wife, and it was just as satisfying to see Pete’s punch connect as it was to see Pete get pummeled by Lane a few seasons ago.

I like Pete because he’s the underdog in a lot of ways — he’s the Stannis Baratheon of “Mad Men,” if you will — yet he has a certain naive charm and steady competence that make him worth rooting for, at least in my book. He is flawed, but we understand the place that his flaws come from; as his brother points out, their dad was just like them, “always looking for something better, always looking for something else." One of Pete’s biggest issues has always been his lack of self-awareness, and yet in last night's scene where he successfully convinces his brother that cheating on his wife isn’t worth it, he genuinely seems to have learned something from his own mistakes. Maybe, suggests Weiner, people can change and grow into better versions of themselves, even if it’s not the characters you hope. Maybe, for some people, it is possible to start over.

And if we’re to take a message from Pete’s happy ending when compared to, say, Betty’s tragic one, maybe it’s also that life is complex and unfair, and some things just work out while others don’t. The show has always been concerned with building character arcs that feel emotionally real, and Pete and Trudy’s reunion feels entirely believable to me. In a show filled with toxic relationships, these two have always had a profound connection -- not to mention some killer dance moves -- and it feels plausible that Pete, what with all he’s been through, could mature enough to make his marriage work.

At the same time, the fact that Pete, of all characters, would get a happy ending, is well in line with the show’s worldview. As Matt Zoller Seitz writes in his recap, “As is often the case on Mad Men, and as is often the case in life, some people can’t win for losing while others can’t lose for winning.” Characters like Pete and Sterling, unlike outsiders like Peggy or Don, have always had the deck stacked in their favor. Pete is part of advertising's old-guard, born into wealth and privilege. It makes sense that a guy like Pete would find a way to have things work out for him, to make off with the jet and the payday and the beautiful wife. Still, even if you have hated Pete throughout the show's run, it doesn’t mean you shouldn't root for him now. Over the past seven seasons, Weiner has been determined to show us that nobody is just one thing, that characters who seem inconsequential are actually worth caring about, and that even the foulest people have redemption available to them.

But as with anything on “Mad Men,” it’s not quite that simple. In order to imagine a happy future for Pete and Trudy, we have to deny everything we know about the past. And as the show has demonstrated time and time again, this is rarely an easy thing to do. As Trudy herself said, in response to Pete’s earlier advances: “I’m jealous of your ability to be sentimental about the past. I’m not able to do that, I remember things as they were.” In order to believe in a happy ending, we, like Trudy, will have to forget the Pete Campbell of old — the misogynist, the adulterer, the exploiter, the prick — and I’m not sure we can do that. Pete doesn't seem so sure either. As he put it to Don on a golf trip a few episodes ago, “You think you’re going to begin your life over and do it right. But what if you never get past the beginning again?” "Mad Men" has always been a show about how men exploit women, and I saw a real mix of views on my Twitter feed last night, ranging from joy at Pete's success to disappointment that Trudy seems to be getting sucked back into a losing arrangement. As one Twitter user put it, "The good news is I have a really great 'men are the worst' playlist ready for Trudy when Pete cheats on her in 3 months." Do we read this as a happy ending for Pete, or another tragedy for Trudy? Or neither?

“Mad Men” has always been concerned with the question of whether it’s possible to start again, and Don, who has often acted as a foil for Pete, has repeatedly shown himself unable to escape his history, continuing to act out in the same self-destructive loops. Will Learjet be a fresh start for Pete, or more of the same? While the airplane in "Mad Men" has always been a symbol of new possibilities and fresh starts, let us not forget that Pete’s father died on a plane crash. Things which soar can also plummet. Or, in the words of the pretty average Duck Phillips, “I've been there -- and it doesn't last long."