From Piper and Alex’s raunchy sex scene to Pornstache’s mom: Everything we know about "Orange is the New Black" season 3 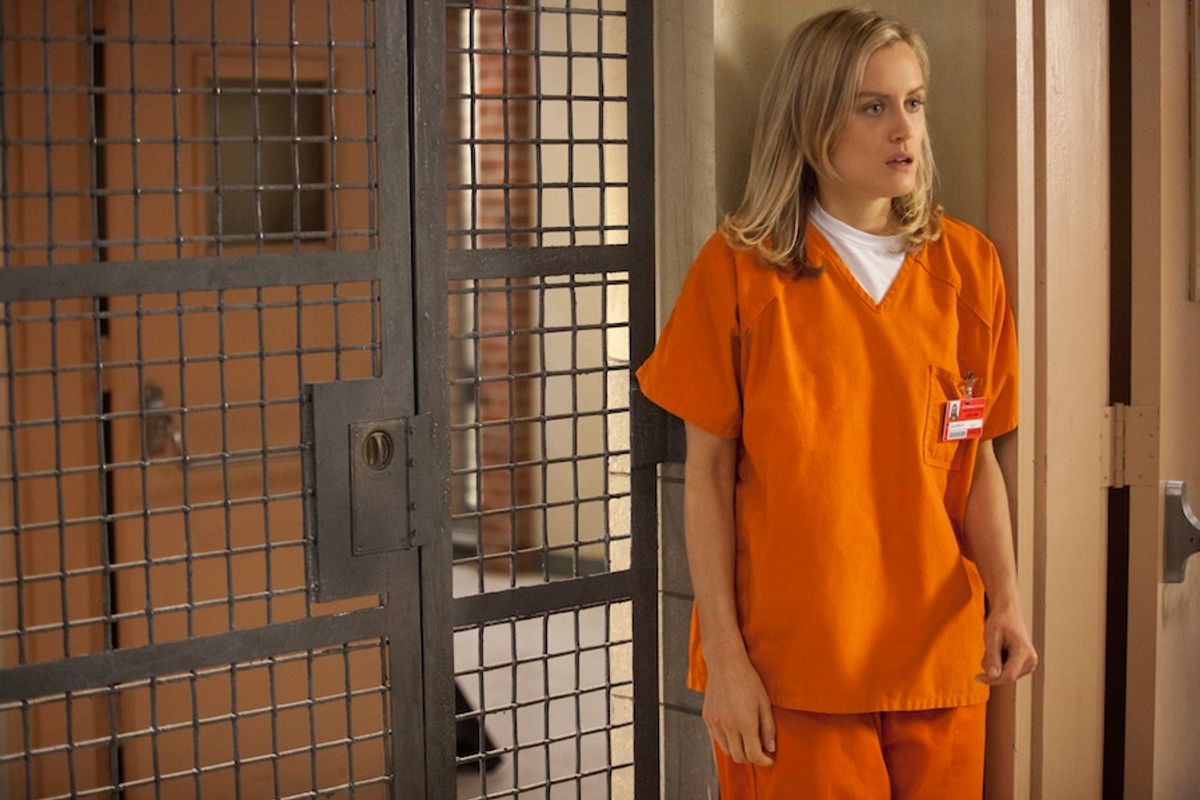 This post originally ran back in April, but has been updated and re-published in light of the new trailer release.

The second trailer for “Orange is the New Black” season three arrived online today, and much like the previous trailer, it gives us a glimpse at what’s ahead for the ladies of Litchfield. As Piper puts, it "people think all we do is have lesbian sex and strip searches and naked catfights in the shower. We do other things!" Unfortunately we still have to wait until June 12th to see the gang in action, but in the meantime, we’ve scoured the internet to find out everything we can about the forthcoming season.

No more Larry!
Jason Biggs, arguably the show’s most disliked cast-member, will not return for season three. “They’re not focusing on Larry at the moment,” Biggs told the New York Daily News, although "there’s always a possibility he can come back.”

There will be less Pornstache, although we will meet his mom
Pablo Schreiber, who played sadistic guard George "Pornstache" Mendez in seasons one and two, confirmed to the New York Post that he would be fully absent from season three. Which doesn’t mean there won’t be any Pornstache-themed plotlines: Mary Steenburgen ("Justified," "Step Brothers") has been cast to play his mom.

A baby is on the way
In season three, it looks like Daya will finally have her baby. "Nine months elapses in Season 3," Matthew McGorry (who plays corrections officer John Bennett) teased TVGuide. However, "[Daya and Bennett] have different ideas about what should happen, as we've seen before, and that continues to come to a head as we get closer and closer to Month Nine. Hormones rage and ... in our case, it's even more complicated." Perhaps Mamma Pornstache is revving up for a custody battle?

Alex and Piper are on again
While Alex was out of the picture for much of season two, Piper’s on-and-off flame will be back for season three; as she tells US Weekly: “I’m in every [episode] in Season 3. It is so good.” And judging by the orange jumpsuit she's wearing in the new trailer, it looks like Alex is back behind bars at Litchfield once more (sing it with us: yooou've got tiiiiii-iiii-ime!)

...and it's going to be sexy
Prepon also revealed to HuffPost TV that things are going to get pretty hot and heavy between Alex and Piper in the near future. ”Season 3, oh man. We’re on episode three and it is, like, so good," Prepon said, during a discussion of sex scenes. "We have a big scene coming up on Monday and it’s going to be great. We’re both so comfortable."

...but a new love interest will come between them
Australian model Ruby Rose has been cast to play Stella Carlin, "an inmate at Litchfield Federal Correctional Institution whose sarcastic sense of humor and captivating looks quickly draw the attention of some of Litchfield’s inmates.” According to Elle, Stella reportedly becomes a "lust object" for both Piper and Alex.

New cast-members
In addition to Steenburgen, comedian Mike Birbiglia and "Fringe" actress Blair Brown have both joined the cast in unknown roles.

An exploration of faith
Both Uzo Aduba and Piper Kerman, who wrote the book the show is based on, have hinted that faith will be a major theme of the season. "[Jenji] is really toying with that idea, about how people absorb and use faith, to their advantage or to their detriment," said Aduba. "With Crazy Eyes, she has, in the past, been a bit of an idol worshipper. ... It'll be interesting to see whether that's something she continues doing, where she puts her faith and whether she's learned her lesson."

More levity
"OITNB" just got labeled a drama at the Emmys. But in terms of tone, it might actually be getting lighter. As writer Lauren Morelli told the Pittsburgh City Paper recently, “"Season two was really dark and I think we really were excited about playing with this antagonist of Vee and seeing what that force would do to the characters we started to love over a season. I think season three is sort of a natural rebound from that darkness. Some of the joy comes back to Litchfield that was lost.”

Is Vee back?
While TMZ reported sightings of Lorraine Toussaint on-set last year, EW debunked rumors that Litchfield's resident Big Bad Vee would not be returning for season three, saying “Despite reports this morning from TMZ that said Lorraine Toussaint is on the set today filming as villain Vee for Orange is the New Black, EW has confirmed that Toussaint is not set to be a part of [Season 3].” Yet a possible cafeteria sighting from the first season three trailer has fans in a tizzy. What does it all mean!? A Nicky shakeup
Judging by the first trailer, which shows our favorite redhead wearing civilian clothes in what appears to be a high-rise office building, Nicky is either out of jail — or we’ll learn more about her backstory in the form of flashbacks.

Lolly is back!
Piper's buddy from the plane in the season two premiere, played by Lori Petty, is heading to Litchfield. While she appears to like her new digs at first (as she puts it: “This place is amazing, and the walls are so clean! I haven’t heard anyone screaming”) we imagine she'll change her mind soon enough; a scene from the trailer appears to show Alex punching her in the face.

Boo gets a new 'do
Nuff said.