Mark Halperin asks Ted Cruz questions that are both useless and offensive. All in a day's work! 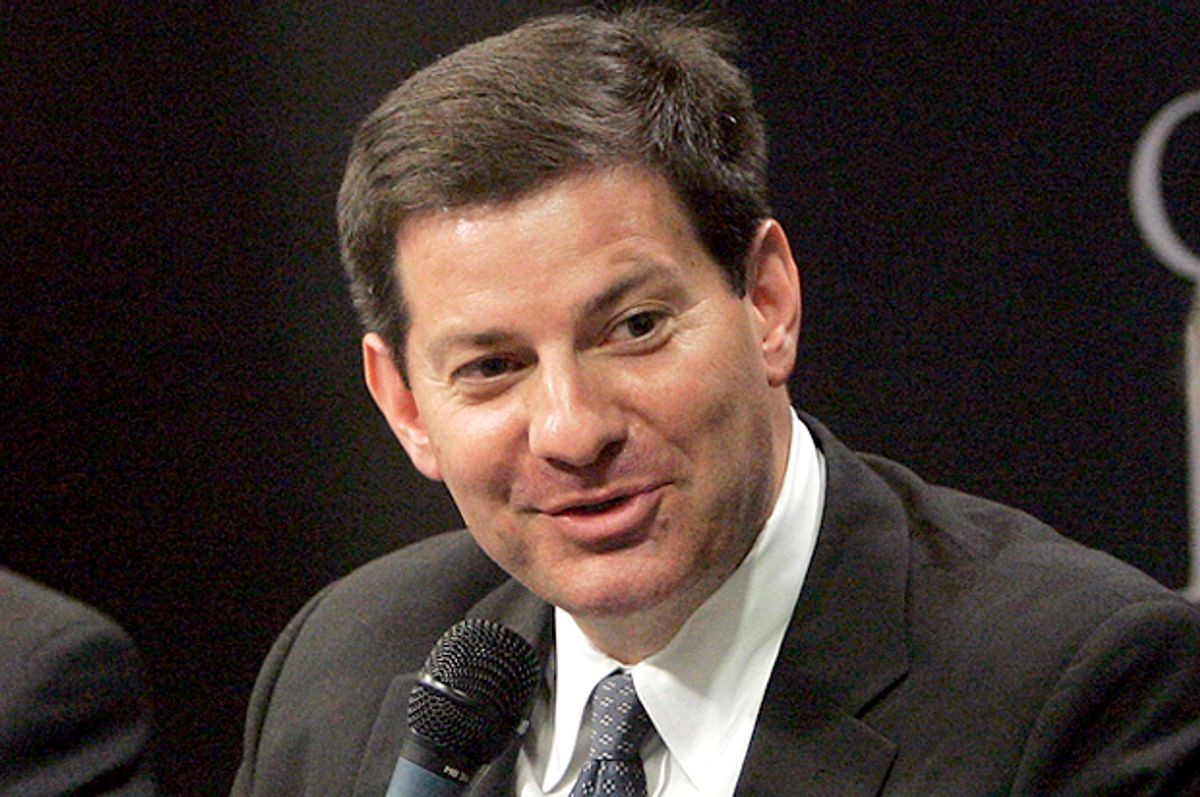 I got to see a lot of Bloomberg Politics' big star reporter Mark Halperin in action while in New Hampshire a few weeks ago. And for the first time in my life I began to understand, partially, why a news organization might pay him seven figures for his services: he's a veteran of the campaign trail who's excellent at getting in people's faces.

After a Jeb Bush breakfast event, staffers instructed reporters to move to a holding room where Bush would take some questions from the media. Most of us went to that holding room and waited, Jeb-less, for 10 or 15 minutes. Bush eventually came to take a few questions, but he was late because Halperin had already gotten to him in the hallway. And even when Bush did come, Halperin had managed to position himself right in Bush's face to ask yet more questions. Numerous scenes like this would play out over the next 36 or so hours, as everyone would be wondering where candidates were hiding, only to learn that Mark Halperin had them cornered in some driveway or holding room or wherever. Halperin is everywhere!

The problem is with how Halperin spends all this face time with the candidates. Does he go after them hard? Does he grill them on important policy positions? He occasionally grills some flacks, but he spends an unadvisable percentage of his time asking get-to-know-you questions, or asking candidates about their own positions within the horserace. (Mark Halperin, by the way, wrote an op-ed all the way back in 2007 decrying the sort of horserace coverage of presidential elections that he had come to personify. That self-reflective phase did not seem to last very long. When you're getting paid millions of dollars for both a new job that doesn't require you to write much and multiple bestselling horserace-style histories of presidential elections, ethical concerns will naturally fade into the rearview.)

Halperin's style of irrelevant, softball questioning goes a long way in explaining how he gets so much face time with candidates. That should be embarrassing enough to his self-esteem. But it must be some sort of extraordinarily low feeling when you've tried to ask a softball, get-to-know-you-question and somehow managed to offend everyone, from Ted Cruz to Twitchy to Think Progress to many Hispanic Americans across the country, to the point where you're issuing an apology.

On April 30, Halperin interviewed Ted Cruz and asked him several questions about being a Cuban-American. Approximately four people total on the planet watch Mark Halperin and John Heilemann's TV show, "With All Due Respect," but one of them is syndicated columnist Ruben Navarrette, who wrote about the interview in a column this weekend.

But then Halperin made it personal, and the interview careened into a ditch. He told Cruz that people are curious about his "identity." Then, the host asked a series of questions intended to establish his guest's Hispanic bona fides. What kind of Cuban food did Cruz like to eat growing up? And what sort of Cuban music does Cruz listen to even now?

I've known Ted for more than a decade and I could tell he was uncomfortable. But he played along, listing various kinds of Cuban food and saying that his musical taste veers more toward country.

I kept waiting for Halperin to ask Cruz to play the conga drums like Desi Arnaz while dancing salsa and sipping cafe con leche -- all to prove the Republican is really Cuban.

Just when I thought I'd seen the worst, it got even more offensive. Earlier that day, independent Sen. Bernie Sanders, of Vermont, had entered the presidential race. So, Halperin said: "I want to give you the opportunity to directly welcome your colleague Sen. Sanders to the race, and I'd like you to do it, if you would, en español."

It's uncomfortable, alright. And not in the good journalistic sense, where you make a public figure uncomfortable by asking really important questions for which they have no answer. He's essentially pleading with Cruz to say LUCY, YOU GOT SOME 'SPLAINING TO DO! while acting dead serious, as though he is asking something of importance.

So alas, Mark Halperin had some 'splaining to do yesterday.

We wanted to talk with Senator Cruz about his outreach to Latino voters the day after he spoke at the Hispanic Chamber of Commerce. My intent was to give the Senator a chance to speak further about his heritage and personal connections to the community through some casual questions. I rushed through the questions, and that was a mistake — it led to poor tone and timing. I also understand why some felt the questions were inappropriate. As for asking Senator Cruz to welcome Senator Sanders to the race in Spanish, that was meant to be the type of light-hearted banter that he’s done with us before on the show. In no way was I asking Senator Cruz to "prove" he was an “authentic" Latino. I apologize to those that were offended, and to Senator Cruz. I promise that I will work to make the tone and questions better next time.