You can call it "misleading" or "offering half-truths," but when push comes to a shove, these are lies 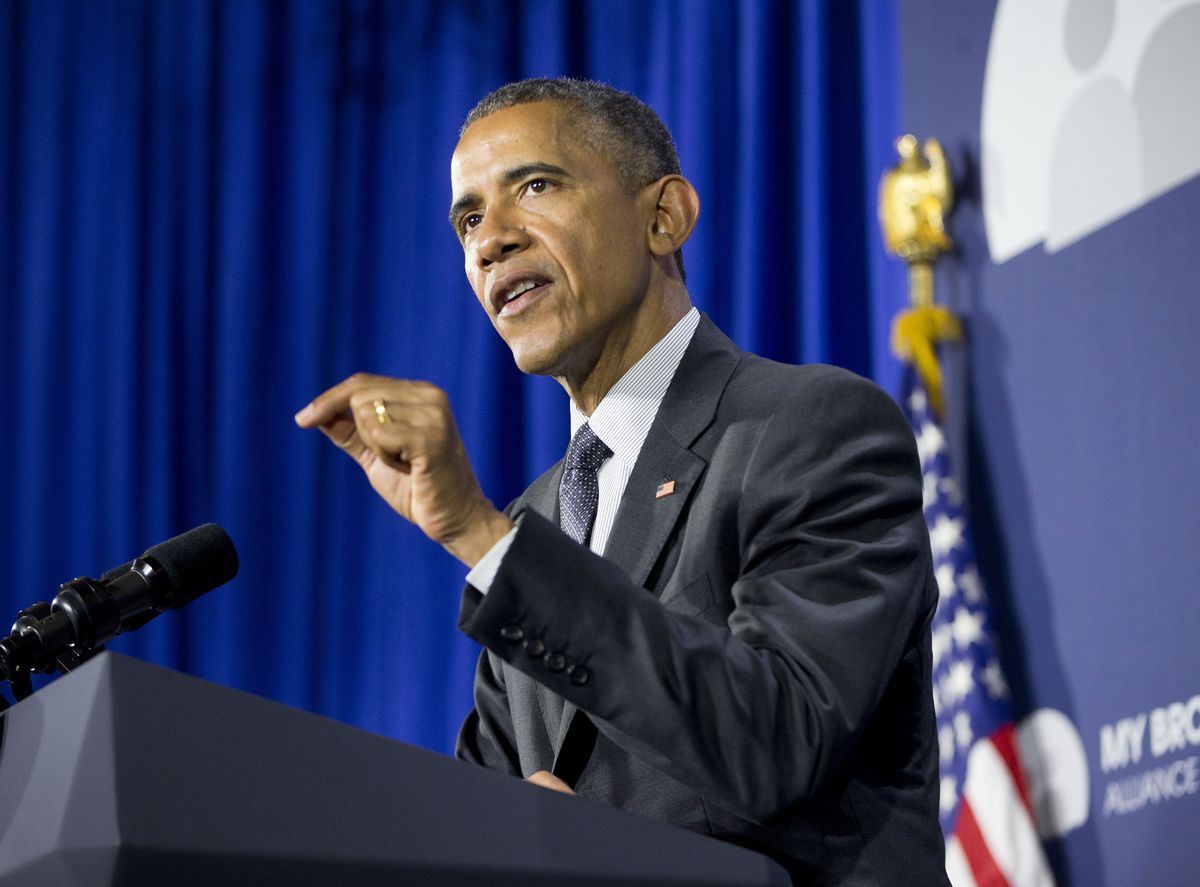 President Barack Obama gestures as he speaks at Lehman College in the Bronx borough of New York, Monday, May 4, 2015. Obama announced the creation of an independent nonprofit organization that is a spin off his "My Brother's Keeper" program, which works to give young men of color more opportunities through mentoring and business partnerships. (AP Photo/Pablo Martinez Monsivais) (AP)
--

Today, the Senate makes a critical test vote on the Obama Administration’s trade agenda, kicking off a process that the White House hopes to end with the signing of an agreement between 12 nations called the Trans-Pacific Partnership. In preparation for this vote, President Obama has been deliberately antagonizing his critics, mostly liberal Democrats. Senator Elizabeth Warren is “a politician, like everybody else,” Obama said Friday to Yahoo News, who has "got a voice that she wants to get out there,” framing her concerns as insincere self-aggrandizement. Those concerns, Obama added, are “absolutely wrong."

This is not the first time that Obama and his aides have depicted opposition on trade as deliberate misinformation designed to stir up a left-leaning political base, or generate campaign contributions; my favorite is the claim that Warren is merely trying to energize a non-existent Presidential campaign.

It’s beneath the dignity of the Presidency to so aggressively paint opponents as not just wrong on the facts, but hiding the truth on purpose. Warren has responded without using the same indecorous tactics. Unfortunately, I don’t have the same self-control. So by way of response, here are ten moments where the President or his subordinates have lied – call it "misled" or "offered half-truths" or whatever; but I’m in an ornery mood so let’s just say lied – about his trade agenda:

1. 40 PERCENT: The President and his team have repeatedly described TPP as a deal involving nearly 40 percent of global GDP. This tells only part of the story. First of all, the U.S. by itself represents 22 percent of global GDP; a bill naming a post office would involve that much. Second, we already have free trade agreements with six TPP partners – Canada, Mexico, Australia, Singapore, Chile and Peru – and between them and us, that’s 80 percent of the total GDP in this deal. The vast majority of the rest is represented by Japan, where the average applied tariff is a skinny 1.2 percent, per the World Bank.

You can see this paragraph in graphic form here. The point is that saying TPP is about “40 percent of GDP” intimates that it would massively change the ability to export without tariffs. In reality it would have virtually no significance in opening new markets. To the extent that there’s a barrier in global trade today, it comes from currency manipulation by countries wanting to keep their exports cheap. The TPP has no currency provisions.

2. JOB CREATION: Saying, as the White House has, that the deal would support “an additional 650,000 jobs” is not true. This figure came from a hypothetical calculation of a report by the Peterson Institute for International Economics, which the Institute itself said was an incorrect way to use their data. “We don’t believe that trade agreements change the labor force in the long run,” said Peter Petri, author of the report, in a fact check of the claim.

The deal is actually more about building up barriers than taking them down. Much of TPP is devoted to increasing copyright and patent protections for prescription drugs and Hollywood media content. As economist Dean Baker notes, this is protectionist, and will raise prices for drugs, movies and music here and abroad.

3. EXPORTS ONLY: The Administration constantly discusses trade as solely a question of U.S. exports. A recent Council of Economic Advisors report touts: Exporters pay higher wages, and export industry growth translates into higher average earnings. But the Economic Policy Institute points out that this ignores imports, and therefore the ballooning trade deficit, which weighs down economic growth and wages. Talking about trade without discussing both imports and exports is like relaying the score of a ballgame by saying “Dodgers 4.” It is literally a half-truth. Recent trade deals have in fact increased the trade deficit, such as the agreement with South Korea. Senator Sherrod Brown notes that the deal has only increased exports by $1 billion since 2011, while increasing imports by $12 billion, costing America 75,000 jobs.

4. MOST PROGRESSIVE: Obama has called TPP “the most progressive trade deal in history.” First of all, so did Bill Clinton and Al Gore, when talking about NAFTA in 1993. Second, there’s reason to believe TPP doesn’t even clear a low bar for progressive trade deals. The Sierra Club, based on a leaked TPP environmental chapter, said that the deal is weaker than the landmark “May 10 agreement” for deals with Peru, Panama and Colombia, struck in 2007. Key Democrats who devised labor and environmental standards for those agreements, like Rep. Sander Levin, believe that TPP falls short. Even if the chapters were up to par, consistent lack of enforcement of the rules makes them ineffective. The U.S. Trade Representative has actually claimed the Colombia free trade agreement is positive because only one trade unionist in the country is being murdered every other week. Labor groups can only ask the White House to enforce labor rights violations, and for the past several years, the Administration simply hasn’t. So when Obama says violators of TPP will face “meaningful consequences,” based on the Administration’s prior enforcement, he’s lying.

5. CHANGING LAWS: On the controversial topic of Investor-State Dispute Settlement (ISDS), where corporations can sue sovereign governments for monetary damages for violating trade agreements that hurt the company’s “expected future profits,” the White House has engaged in a shell game. They say, “No trade agreement is going to force us to change our laws.” But the point of a corporation suing the United States or any trade partner is to put enough financial pressure on a government to force them to alter the law themselves. So ISDS doesn’t “cause” a change in law only in the narrowest sense. Even third-party countries have curtailed regulations in reaction to ISDS rulings, as New Zealand did with their cigarette packaging law, awaiting the outcome of a dispute between the tobacco industry and Australia (a suit that continues despite an initial victory for Australia).

6. NEVER LOST: The White House assumes that the only thing America cares about with ISDS is the upsetting of our own laws. So they’ve stressed that the U.S. has never lost an ISDS case. This is irrelevant. What ISDS does is offer bailout insurance policy to multinational corporations. If they run into discrimination or regulatory squeezing by a foreign government, they can use an extra-judicial process to recoup their investment. Workers screwed over by trade agreements have no ability to sue governments; only corporations get this privilege.

The United States attracts businesses through our relative rule of law. When that insurance is granted to countries like Vietnam and Malaysia, it weakens our competitive advantage, and makes it simple for countries to outsource their operations. Their investment is protected, as is their ability to exploit cheap labor. This makes it impossible for America to compete.

7. WEAKENING DODD-FRANK: Obama reacted strongly to Senator Warren’s charge that a future President could overturn financial regulations or other rules through trade deals. “I’d have to be pretty stupid,” Obama told Yahoo News, to “sign a provision that would unravel” signature achievements like Dodd-Frank. I suppose he is, then, because modern trade agreements often seek to “harmonize” regulations, effectively setting a regulatory ceiling. This harmonization could, as Warren says, “punch holes in Dodd-Frank without directly repealing it,” by forcing regulators to roll back capital or leverage requirements.

European negotiators want a trade agreement with the U.S. called the Trans-Atlantic Trade and Investment Partnership (TTIP) to include a chapter “harmonizing” financial regulations. So far the Obama Administration has rejected this, while admitting the potential for regulatory harm. Treasury Secretary Jack Lew told Congress in December 2013, “Normally in a trade agreement, the pressure is to lower standards” on regulations, “and that’s something that we just think is not acceptable.” A future President might find it acceptable, and today’s vote on “fast-track” authority would give trade deals an expedited process, with no amendments or filibusters by Congress, for six years, outlasting the current Administration. Scott Walker or Jeb Bush may decide it’s perfectly appropriate to undermine regulations in trade deals.

8. STOPPING CHINA: President Obama frequently casts TPP as a way to “contain” China. “If we don’t write the rules for trade around the world, guess what, China will,” he said on Friday. This is so facile as to be totally meaningless. China is a major Pacific Rim economy, and will have a presence regardless of our actions. As former Clinton Defense Department official Chas Freeman writes, “China has been and will remain an inseparable part of China’s success story.” Plus, as I’ve written in Salon, weak “rule of origin” guidelines could allow China to import goods into TPP member countries without any tariffs, while freed from following any TPP regulations.

9. SECRET DEAL: Obama has angrily dismissed the notion that TPP is a “secret” deal, saying that everyone will have public access to the TPP text for at least 60 days before a final vote. This is not the point opponents are making. The vote on fast track would severely limit Congressional input into the deal. And right now, members of Congress can only see the text in a secure room, without being able to bring staffers or take notes, or even talk about specifics in public. That makes the deal effectively secret during the fast track vote. “The president has only committed to letting the public see this deal after Congress votes to authorize fast track,” Warren told Greg Sargent. The President wants to filibuster-proof the bill in secret, then employ pretend transparency on TPP after that.

10. JUST A POLITICIAN: This idea from Obama that everybody opposing fast-track is acting like a mere “politician,” aside from demonizing the concept of representing constituents, neglects the fact that he’s a politician too. His interest in building a legacy, when practically nothing else has the potential to pass Congress the next two years, is a political interest. His possible interest in rewarding campaign contributors who would benefit from TPP is also political, or his desire to earn the respect of the Very Serious People who always support trade deals. Since Obama has a large platform and will not publicly debate any opponent on trade, he can float above it all, acting like a principled soul only wanting to better the country rather than a transactional ward heeler. This may be the biggest lie, that Obama’s somehow superior to everyone else in this debate.