The delicate flowers of Wall Street: Financial titans warn Hillary to be mindful of their feelings 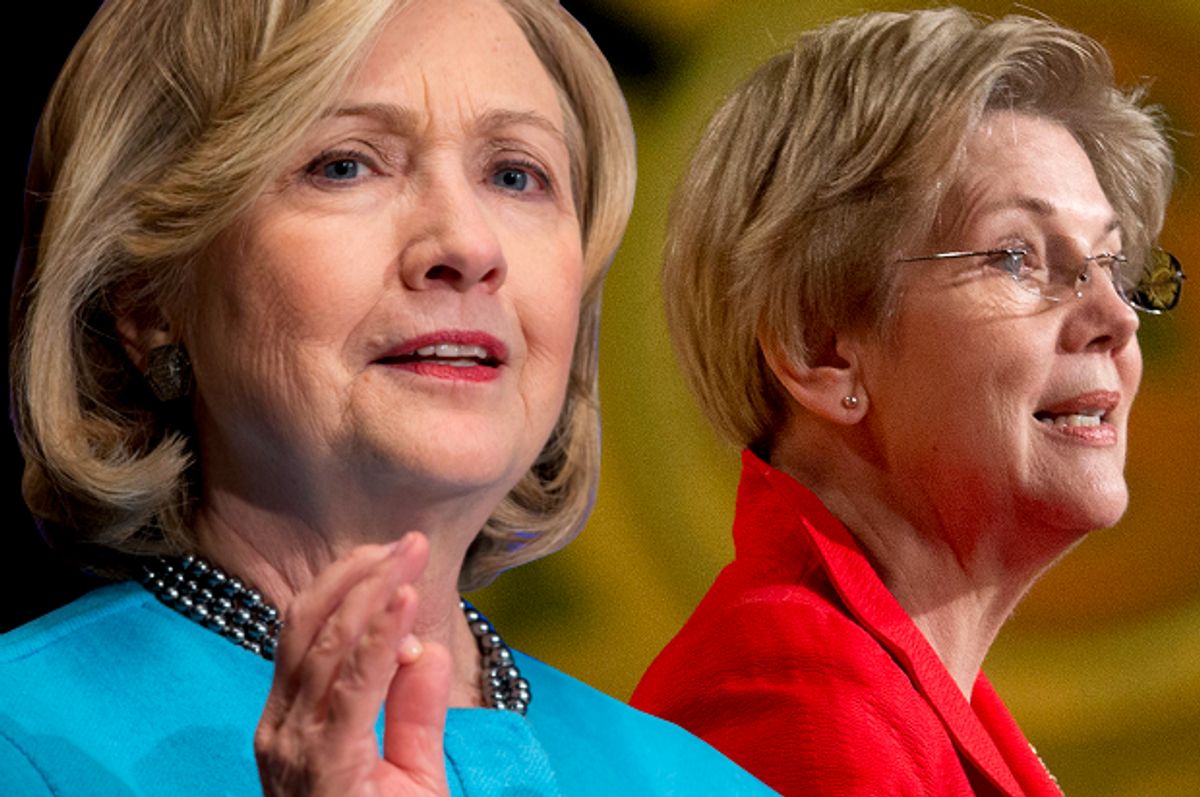 There is no commodity more precious, more delicate, more vulnerable to lasting and irreparable harm than the feelings of a Wall Street executive. The titans of the financial industry have faced zero criminal liability for nearly destroying the economy in 2008, they still enjoy unrivaled influence over the policy platforms of both major political parties, and no one except Bernie Sanders even considers making a run for the president without hitting up the hedge fund managers for donations. Life is very, very good for the rich and powerful. But it isn’t quite good enough, in their view, largely because certain politicians are apt to say unflattering things about Wall Street.

Politico reported yesterday that, in the aftermath of the Tories’ unexpected rout of Labour in last week’s elections in the United Kingdom, Wall Street executives are warning Hillary Clinton and other Democrats that if they keep it up with the populism, then they’re going to meet the same fate as freshly resigned Labour Party leader Ed Miliband:

These bankers and their ideological supporters say if likely Democratic presidential nominee Hillary Clinton keeps tacking to the left on Wall Street issues — as Massachusetts Sen. Elizabeth Warren, other progressive Democrats and Vermont Sen. Bernie Sanders are demanding — she could wind up facing the same fate.

“[Prime Minister David] Cameron embraced the role of the financial sector in growing the U.K. economy and creating jobs, never once criticizing hedge funds, banks or the wealthy,” said a top executive at one of Wall Street’s largest firms. “Miliband ran against hedge funds and bankers, promising bonus and mansion taxes and lost big. Is that a lesson for Hillary as well?”

Is it? IS IT??? A few months ago we were told that the kings of Wall Street were none too perturbed with Hillary Clinton’s populist rhetoric because they largely understood that she has to say such things to win the Democratic nomination. In the meantime, they’d keep funneling cash to her campaign and trust that she wouldn’t make life too difficult for them once in office. Now that a politician somewhere in the world has lost badly while campaigning on a platform to attack inequality, they’re seizing the opportunity to make the case that populism is bad and that average people, deep down, carry the fire for hedge fund managers and recoil at the prospect of slightly higher tax rates on unearned wealth.

It’s an inspiring defense of the overly-maligned banks and the wealthy. And, of course, none of the wealthy people mounting that defense want their name attached to it because they’re afraid they’ll look bad, thus undermining the entire defense:

This executive, like several others who cited the U.K. election result as a warning to populists, declined to be identified by name or by firm for fear of eliciting a heavy backlash.

This is all part of the broader pathology of the masters of the financial universe in which they’ve so thoroughly convinced themselves of their own superiority that they feel they should be above criticism. As far as they’re concerned, populist anger at the banking industry is largely illusory, a campaign gimmick egged on by the media – after all, no one was ever prosecuted after the crash, so that means no one did anything wrong, right? And while they're willing to allow a little populist posturing from the candidates they try to purchase, even a light wrist slap from someone like Hillary Clinton, who makes campaign-trail references to outrageous CEO salaries while also hitting up Goldman Sachs executives for contributions, can easily become too much to tolerate.

This overriding sense of self-importance of course leads them to believe that elections are won and lost based solely on who said what about the bankers. Again, from Politico:

“I would say that this is the second major election in a row where bank bashing no longer seems to move voters,” said a lobbyist for the banking industry. “Even where voters may continue to have anger about banks, other issues seem to be driving their votes. We saw that last year in the U.S., and now we seem to be seeing an echo in the U.K.”

Imagine that. A bank lobbyist believes anti-bank political rhetoric is a loser. No motivated reasoning there! Maybe it’s possible that voters in the U.K. decided to throw Miliband out on his [checks British-English dictionary] arse because he was too hostile toward the financial industry. It could also be that they thought he was a wanker and was not effective at tapping into the country’s overwhelming dissatisfaction with the banking system. Alternately, Miliband could be paying the long-deferred price for Tony Blair’s wankery. Whatever the reason, I’m not entirely sure it has much relevance to a presidential election that is still over a year away in a different country with a different political system.

But if you’re a self-absorbed Wall Street dimwit, the connection is clear: the British man criticized my friends, and the British people didn’t vote for him, so clearly this Elizabeth Warren type-stuff won’t play well in New Hampshire.