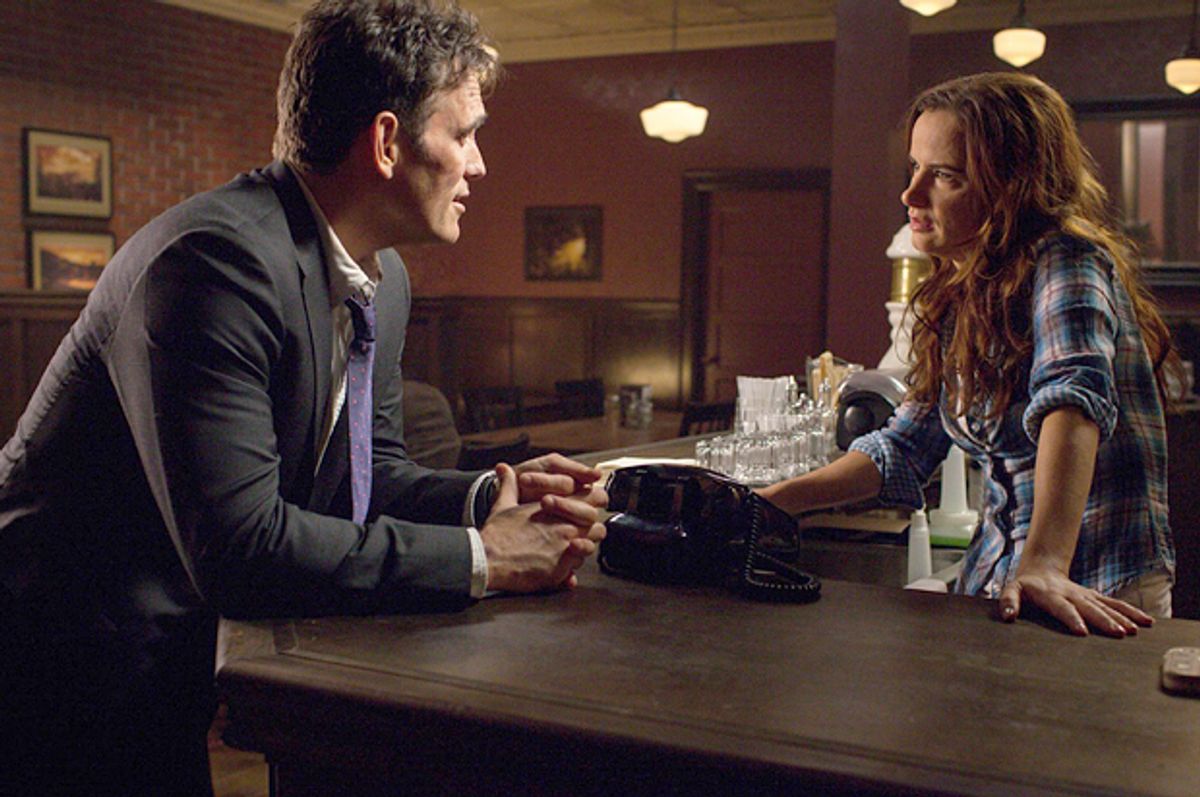 “Wayward Pines," premiering Thursday night on Fox, has the style and appeal of a ‘50s B-movie. That might sound like criticism, but it’s not: If anything, it’s refreshing how committed the series is to its tone, which combines the lush woodland horrors of the Pacific Northwest (the setting of “Twin Peaks” and the filming location of “The X-Files”) with the strings-heavy score of a pulp film that wants to gesture wildly towards impending doom. The show’s sophistication is almost entirely concentrated in the manufacture of atmosphere: Wayward Pines, the Idaho town, is a veritable time capsule, with rotary phones, flickering neon signs, and a sickly green hospital ward to rival Nurse Ratched’s.

Leads Matt Dillon and Carla Gugino seamlessly blend into the town’s retro sensibilities—Dillon, as the protagonist Ethan Burke, is tall, dark, and handsome, with a rasping low voice that could not be more classically masculine. Gugino has been cast in period bombshell roles before, such as “Watchmen” and “Sin City,” and continues the theme here as Kate Hewson, whose role is a twist on the prototypical trapped housewife of the suburbs. The houses of Wayward Pines—little boxes made of ticky-tacky—are hiding some undefined horror. The small-town good-naturedness of the denizens—on those streets where everybody knows your name—masks some horrible suffering. If you leave “Wayward Pines” with no other impression, you’ll leave with that: The indelible feeling of something wrong in this sleepy Idaho town.

In some ways, that makes “Wayward Pines” much less sophisticated than the show it is consciously referencing, David Lynch’s groundbreaking “Twin Peaks.” The older show, which ran for two seasons and became a cult hit, mingled creeping dread and enchanted forests with bizarre comedy and surreal characters, deconstructing the tale of the small-town-with-secrets as much as it sought to tell another story in the same vein. “Wayward Pines” isn’t nearly as adventurous with its form and substance.

Instead, its closest TV analogue is “The Twilight Zone”—one very long episode of “The Twilight Zone,” to be exact, that is an homage to “The Monsters Are Due On Maple Street,” that fantastic short story of suburban hysteria.

It’s hardly surprising, coming from executive producer (and director of the first episode) M. Night Shyamalan, the vision behind “The Sixth Sense,” “Signs,” and “The Village” (which bears particular resemblance to “Wayward Pines”). At this point, Shyamalan has a checkered reputation, largely because the endings of his films aren’t as compelling as the tangled web of strangeness he tries to weave at the beginning. It’s a quality exacerbated by Shyamalan’s limited interest or range: He is never interested in veering towards camp, or in dialing back the creeping dread. Instead his stories are stubbornly serious, stubbornly masculine, and invariably spinning towards a scattered, barely plausible story.

If Shyamalan’s formula has seemed tired for film, though, it might be perfect for TV. He’s not the main creative on “Wayward Pines”—the show is based on the novels by Blake Crouch, and was developed for television by Chad Hodge. Shyamalan’s involvement is more about mood than story—and that’s an excellent use of his talents.

To wit: The primary effect of “Wayward Pines” is of a story that keeps changing what it seems to be—from a missing-persons case to a weird hospital adventure to an examination of the surveillance state. All are horrifying in their own ways, but what’s fun (and unsubtle) about “Wayward Pines” is how cavalierly the show engages with a premise before tossing it aside. Characters really die in the first few episodes of “Wayward Pines”; the game changes more than once in just the first five episodes released to critics. It’s a miniseries, not a regular series, meaning it has a cast that didn’t have to commit to years of filming and a story that theoretically ends in 10 episodes. It can take more risks.

What that means, in practice, is that “Wayward Pines” is a splashy, melodramatic thriller: smart enough to stay ahead of itself, well-made enough to keep the audience engaged; creepy enough to be delightful. Melissa Leo unleashes her considerable talent towards playing the series’ deceptively sweet evil nurse, one who threatens patients who cross her with surgery—sans anesthesia. Juliette Lewis doubles down on playing the horror film’s archetypal sidekick, good for both fact-finding missions and terrified screaming. And Terrence Howard is his typically outsize self as the creepy town’s creepy sheriff, who is, among other odd things, always eating ice cream.

“Wayward Pines” is deliberately playing to the middle; it’s not trying to be the best drama of the summer, it just wants to be a fun one. I can’t recommend it as premium viewing. But if you’re in the mood to follow a yarn that feels like it was thought up by a science-fiction writer in 1961, you’ll have a blast with this show. “Wayward Pines” is very good at being a moody genre mystery, and especially good at feeding its audience just one piece of the puzzle at a time. I watched it all because I wanted to see what happened next, and that is not something I can say of most shows on television.