Snapshots of a racist teacher: What a principal's bigoted rant shows us about American education

An Atlanta principal shocked onlookers at a graduation with a stunningly offensive outburst. She is not an outlier 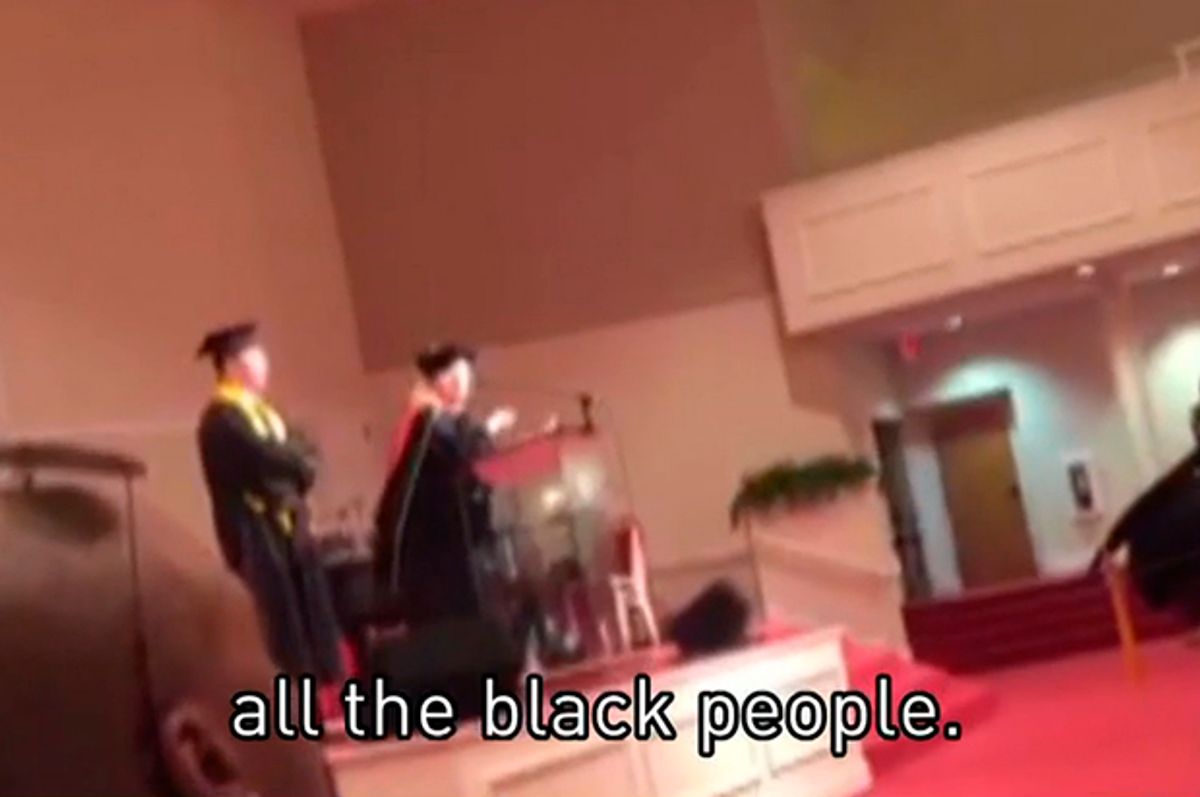 Over the weekend, Nancy Gordeuk, the founder and director of TNT Academy, a small private school in the Atlanta area, made racially offensive remarks at the school’s graduation ceremony.

After some confusion in the program, many in attendance thought the graduation had concluded, when it became clear that Gordeuk had neglected to let the valedictorian give his speech. Gordeuk tried to corral the audience back into the hall to finish the ceremony, but when that didn’t work, she yelled, “Look who’s leaving. All the Black people.” Immediately, all of the Black graduates got up and marched in a single file line out of the ceremony, while the white valedictorian cringed in embarrassment.

The utter outrageousness of Gordeuk’s outburst is only the most obvious of things to say about her remarks. I am also struck by the swiftness with which she moved to shame a whole demographic of people because she could not get them to respond to her requests. Though racial unity remains elusive for Black people -- as well it perhaps should -- a sense of linked fate does inhere in much of our political analysis. How we feel about this sense of shared destiny varies from person to person. But one of the quickest ways to raise the ire of Black people is to suggest that “all the Blacks” should or shouldn’t do any particular thing.

Still, that desire to shame Black people into submission is at the heart of so much public discourse about unruly Black people who cannot seem to follow simple instructions. Because Gordeuk said such inappropriate remarks in a roomful of children clad in graduation attire, among their doting family members, it is clear to see just how out of line her remarks are. But these malicious sentiments about unruly Black people who need to be shamed into doing the right thing have been pervasive in social discourse of late, particularly in light of continuing Black Lives Matter protests throughout the country.

Koritha Mitchell, associate professor of English at Ohio State, has written that Black people should respond to these long histories of white shaming tactics with what she terms a “critical demeanor of shamelessness.” Such a demeanor allows us to “recognize not only the power of dominant assumptions but also how little they have to do with you and the communities to which you belong.”

This principal had hoped to make Black attendees stay. Instead, after her remarks they left, and they did so shamelessly. We need to walk out on racist acts far more often.

This act of walking out, which the students did in community with family and friends who probably played a critical role in their educational success, also points to all the times that they perhaps could not walk out while learning in a school environment run by a woman with such antagonistic racial views. No child should have to learn in a racist environment. But far too many Black and Latino children do learn in such environments.

On the one hand, TNT Academy seems to be a kind of school of last resort for children who struggle in traditional academic environments. So for many students, graduating from this school culminates a challenging, but ultimately successful academic history. Starting such a school is to Gordeuk’s credit. But the nobility of that effort is deeply undercut by the fact that she is a rabid racist, who insulted her students and their families at their graduation. Many Black people can attest that we owe much of our educational histories and successes to racist educators.

This has certainly been true for me.

The sixth grade was the second time that a fellow student called me a nigger. This time it was over a scuffle at the water fountain. I may, in fact, have been in the wrong in the scuffle, over who was first in line at the fountain. That did not, of course, make me a nigger.

The mother of the child who called me that term taught at my school. Perhaps that was why our Black principal opted not to take more severe disciplinary action against that student, my classmate, her son. Years later, I ran into that teacher and her husband, my classmate’s parents, while I was out on a date. It was apparent when I met them that the father deeply despised Black people. When you grow up in the South, you learn very quickly how to assess these matters. Racist sentiments inhere in subtle gestures, the way that people avert their eyes, refusing to look at you, or conversely, stare at you with a steely disregard and a refusal to speak, that makes you begin to wonder whether there is something on your face or your body that shouldn’t be there.

I knew then that my initial impression of my classmate had been right -- the N-word rolled off his tongue, because it was most probably in frequent use in his home.

Gordeuk’s son took to social media to defend his mother, and could not resist dropping a few N-words in her defense. It seems, given his clear lack of compunction about the public use of that term, that he uses this term readily and with ease. For Gordeuk’s part, she blamed the devil, who was “in the house and came out from [her] mouth.” If the devil exists, he is assuredly a white supremacist. But Gordeuk cannot get away with blaming her racism – and she did admit to her own racism -- on the devil.

We must stop accepting an education system where an exceptional few Black students excel because of the grace of God, and the others are left to the devilish schemes of racist madwomen. That’s far too fine of a point to put on a more complicated, structural problem. Racism is never just a problem of individual attitudes -- for this woman also created a school environment that helped these children to successfully graduate, after they didn’t fare well in traditional school environments. But given the virulence of her racism, it is easy to surmise that the school also has a racially hostile climate.

And herein lies the challenge. Many of my best teachers growing up were veritable racists. My sixth grade math teacher -- I hated sixth grade -- also owned a small clothing store in town. And Black people generally never shopped there because she watched Black customers like a hawk and was as unpleasant as possible when they came into the store to shop. In class, she mocked me each day, until I was reduced to tears. I never told my mother, for fear that I must be doing something wrong, or, conversely, fear that my mother would go and wreck shop.

From the fifth grade forward, there was never a year when my mother did not have to talk to a teacher or school administrator about racially charged remarks. Not one year. But I also remember that in almost every case, save fifth, sixth and eighth grade, I had positive interactions with the very same teachers who made inappropriate comments to me.

Sitting all these years later with the complicated reality that I’m educationally indebted to both benign and malignant racists alike, what is clear is that no child should have to navigate this kind of educational world. The incessant mocking from my teacher did not kill my spirit. But it was designed to do so -- designed to extinguish the fire of a precocious Black girl, who always knew the answers and got them right.

I was one of the lucky ones. But the entire point of a good education is that your life chances should no longer be left up to luck.

It would be easy to dismiss Nancy Gordeuk as an especial and enduring breed of Southern racist, but what should we make of her son, who certainly is in a different generation than she? And what does it mean that her antics, while over-the-top, don’t seem drastically different from my own experiences more than 20 years ago?

Our children do not just need good textbooks and comfortable buildings in which to learn. They also need culturally competent, anti-racist educators who do not shame them and their families. We must also stop looking at Gordeuk as a relic of a racist past, since American racism is still very much present, and since many Black children will tell you about the range of racist aggressions and micro-aggressions they experience from educators each day.

I am glad the students of TNT Academy walked out on their graduation day. In doing so, they rejected the implicit lie of their own inferiority that Gordeuk’s comments tried to shame them into believing. They recognized the lie, and instead embraced the truth of their own value and capacity for achievement.

Down South, we say: Tell the truth and shame the devil. The truth is, Gordeuk’s shaming tactics didn’t work. Her students, heads held high, have commenced indeed.