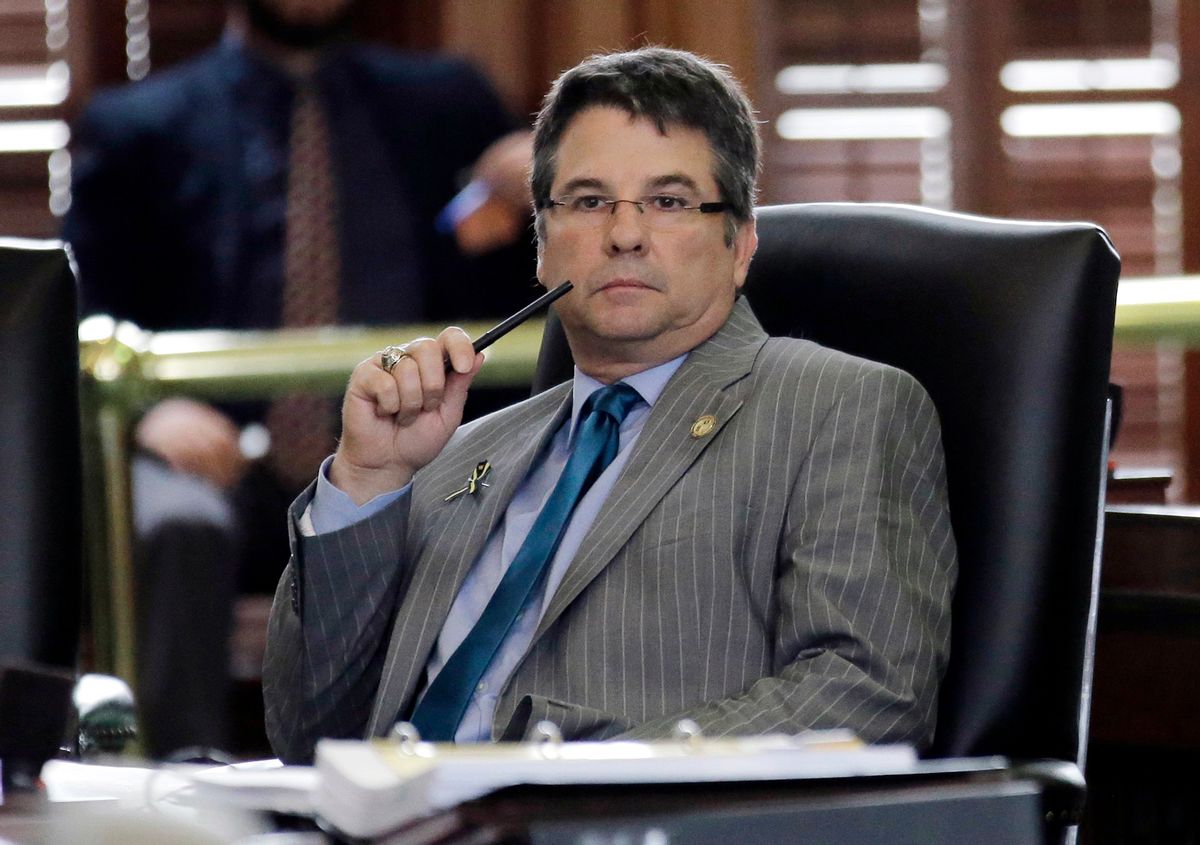 Texas Sen. Charles Perry, R- Lubbock, sits in the Senate Chambers at the Texas State Capitol, Tuesday, May 12, 2015, in Austin, Texas. A woman in Oklahoma has requested a protective order against Perry, whom she accuses of stalking and threatening to harm her. (AP/Eric Gay)
--

An Oklahoma woman who works as a dancer at a "gentlemen's club" has filed a protective order against Texas State Sen. Charles Perry, the anti-gay Republican who likened America's "spiritual battle" to the Holocaust when he was sworn in. But isn't that how it always goes?

The woman, Cynthia Lynn Ortiz, filed a handwritten request for the protective order in Creek County, Oklahoma, where she claims she moved after Perry began stalking her in 2010. Ortiz says she met the lawmaker at a Lubbock, Texas Republican Women's event in 2009, but later relocated to Denton, Texas, and then to Oklahoma, when he would not leave her alone. According to the protective order request -- of which Ortiz posted a photo on Twitter -- Perry recruited acquaintances to help him keep tabs on the woman.

"I could not go outside without one coming to watch especially if I was on the phone," Ortiz's request states. "A man in a brown truck would follow me everywhere I went."

Ortiz also claims the lawmaker hacked her computer, interfered with her relationships and her work, vandalized her car and installed surveillance cameras in her home, according to the Oklahoman. Perry's office has denied each of her claims and taken to attacking Ortiz's character, in addition to requesting that a judge dismiss the protective order.

Ortiz has called Perry's response to her claims "textbook" and insists that she asked the senator to leave her alone before taking official steps to keep him at a distance. According to Ortiz's Twitter, Perry has taken retaliatory action against her and threatened an investigation by the Lubbock district attorney, with whom Ortiz claims the lawmaker is friends. The woman also claims she has attempted to take legal action against Perry in the past, but that law enforcement officers in Lubbock, Denton and at the Texas Department of Public Safety refused to help her:

2014 Denton PD. Officer said he called Mr. Perry and told him 2 leave me alone but refused 2 review documents or investigate

Since being sworn in in September, when he first declared that the U.S. government is perpetuating "laws that lead citizens away from God," Perry has put his name on an anti-same-sex marriage bill on which the Texas legislature is expected to vote this week. The "The Preservation of Sovereignty and Marriage Act" would prevent Texas from issuing same-sex marriage licenses even in the face of legalized marriage equality across the country. The lawmaker has been an adamant proponent of "protecting" "traditional marriage," despite allegedly frequenting strip clubs and attempting to kiss the employees.

According to the Associated Press, the protective order against Perry has not yet been served. Ortiz claims she has not yet received police protection.